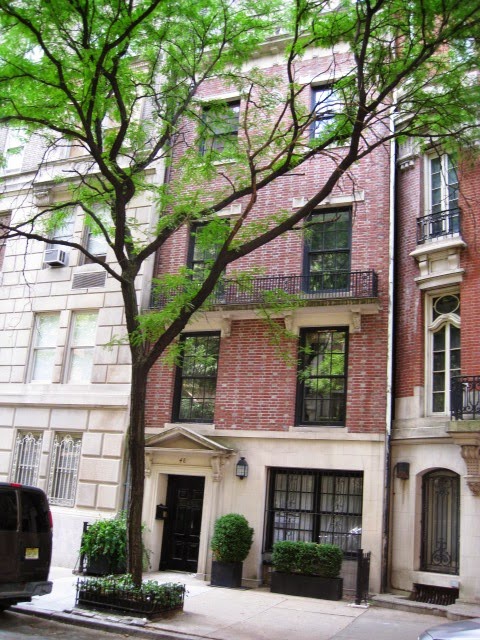 In 1870 brothers David and John Jardine designed a row of eleven Italianate rowhouses along the south side of East 74th Street.  Before long the pair would not only be designing, but erecting speculative blocks of houses in the developing area.  But these new brownstones, stretching from No. 30 through 50, were the project of developers Peter V. Winters and William T. Hunt.

The row was completed in 1871.  Each carbon-copy home was four stories tall over a deep English basement.  Hefty stone Italianate newels flanked the steep stoops.  Intended for merchant-class families, there was nothing extraordinary in their design to set them apart from scores of similar dwellings being constructed in Manhattan and Brooklyn at the time.

Two years after the houses were completed the Financial Panic of 1873 set in.  The devastating depression was perhaps the cause of the foreclosure of No. 48 in July 1879.  The owner had company in his “embarrassment;” at the same foreclosure auction was No. 26 East 74th Street, half a block away.

No. 48 was purchased at the auction by Moses Ehrenreich and his wife, Hannah.  The deed, as was customary, was put in Hannah’s name.  Ehrenreich was a member of Ehrenreich Bros., a well-known factoring firm in the retail coal business.  He would also serve as president of the Coal Exchange.

Hannah Ehrenreich followed the proprieties of a well-to-do Victorian woman.  When daughter Blanche became engaged to Dr. J. Lowengood, she hosted “at homes” on December 24 and 31, 1893.  In the 19th and early 20th century, announcing that one was “at home” was a signal that guests were welcomed to call.  It was a less formal method of inviting guests and one way socialites coordinated their entertainments.

The practice would be repeated in November 1902 when Lillian Ehrenreich became engaged to George H. Shumen of Boston.  But Moses and Hannah had other issues to deal with that year as well.

By the time Lillian met George, the East 74th Street neighborhood was rapidly changing.  As mansions rose along Fifth Avenue, the affluent district spread eastward.  Millionaires purchased the 1870s brownstones and either razed or remodeled them into stylish, modern residences.

In 1900 Frank L. Froment lived next door to the Ehrenreich family.  That year, like so many of his neighbors, he stripped off the facade and created a fine American basement mansion with a bold three-story angled base.  Hannah and Moses Ehrenreich, however, were less than pleased.

To their eye Froment had overstepped his property line by four inches, crowding their stoop, and stealing that amount of brownstone from their home.  In 1901 they took Froment to court demanding that he undo the damage.

The court was taxed with determining at which point in the party wall the property changed from Froment’s to Ehrenreich’s.  It would not be an easy task.  The New York Supreme Court ruled in favor of Ehrenreich; directing Froment “to restore the front of the plaintiff’s said house to its original condition” following a vertical line from the sidewalk to the roofline directly along the center of the party wall.

Any victory Moses and Hannah celebrated would be short-lived.  Froment appealed and they were all back in court in June 1902.  Following that hearing, the judge determined that the earlier judgment be reversed and a new trial ordered.

None of this resulted in good neighborly relations and before long Frank Froment moved from No. 50 to No. 52; leaving his newly remodeled home as a buffer.

The messy legal matter was put aside on June 17, 1903 when Lillian Beatrice Ehrenreich married George Harrison Shuman in Delmonico’s.  The New York Times reported the following day that “The bridal couple will leave New York to-day on the sloop-yacht Lamont for an extended cruise up the New England coast.  After their return they will be at home both in Boston and this city.”

After more than 30 years in the old brownstone, Ehrenreich sold it in 1911 to Dr. Howard Lilienthal, attending surgeon to Bellevue Hospital and visiting surgeon to Mount Sinai Hospital.  He would also serve as consulting surgeon to the Jewish Maternity and the Har Moriah Hospitals, and to the Hospital for Deformities and Joint Diseases.

There was good reason for Lilienthal's purchase.  Shortly afterward, on November 7, Lilienthal married Edith Strode in the Church of the Ascension.  “After a short trip South Dr. and Mrs. Lilienthal will occupy their new residence at 48 East Seventy-fourth Street,” announced The Times.

Before the newlyweds would move in, however, Lilienthal would do what nearly every other homeowner on the block had already done—remodel his new house.  He commissioned architect S. Edson Gage to strip off the brownstone and update the residence into a modern neo-Georgian dwelling.

The style was currently quite fashionable among the moneyed set in New York and, with its dignified lines and lack of ostentatious ornament, created an appropriate home for the doctor.  Gage produced a handsome Colonial-inspired house that restrained itself among its more showy neighbors.

A nearly-severe limestone base supported three stories of red brick trimmed with paneled limestone lintels.  A charming third floor balcony relieved the flat façade.  The fifth floor was disguised by a stone balustrade above the cornice.

As World War I broke out, Lilienthal joined the Medical Reserve Corps of the U.S. Army as First Lieutenant.  It is possibly his war duties that prompted the Lilienthals to lease the house furnished to Miss Mary Olcott of Ridgefield, Connecticut in October of 1917.

Then The Sun reported on May 30 the following year that “Mrs. Howard Lillienthal has sold the five story American basement residence…to a buyer for occupancy.”  The house became home to Dr. Arthur Stein.

Stein had graduated from the University of Strassburg in 1901.  By now he was Associate Gynecologist at Lenox Hill and Harlem Hospitals.  Like Lilienthal, he also worked at the Hospital for Deformities and Joint Diseases.  Stein and his wife, Alice, would remain in the house until June 1929, when they sold it to yet another physician, heart specialist Dr. Henry James.

James was well-regarded and had established himself as the physician of some of Manhattan’s wealthiest citizens.  When Chauncey M. Depew, Jr., son of the well-known senator, died of pneumonia on January 25, 1931, it was Dr. James who was attending him.

1941 was a year of upheaval in the household.  On February 19, 1941 Henry James’ wife, the former Rosalie O’Brien, died in Doctor’s Hospital.   Then, just over two weeks later with World War II raging in Europe, their son, 23-year old Morgan James was inducted in the Army.

The doctor bounced back from his grief, however, and less than a year after his wife’s death he married Lady Thornton on February 8, 1942.  The wealthy bride was the widow of the chairman and president of the Canadian National Railways.

The last of the doctor’s sons, Philip Ranson James would leave the house in 1950.  Educated at Columbia, his engagement was announced in February of that year.  Somewhat ironically, his bride-to-be was Catherine O’Brien, who shared the same maiden name as his mother.  The couple was married in Southampton on September 10.

Seven years later Dr. Henry James died in the house of pneumonia at the age of 76 on July 14, 1957.  At the time of his death he had been Senior Attending Physician at Bellevue for 27 years.

The house was sold the following year in March to the Jewish Braille Institute of America as its headquarters.  The institution maintained a free circulating library of more than 15,000 braille volumes and a collection of talking books.  The house was completely renovated as offices, including the installation of an elevator.

The 21st century saw many of the Upper East Side’s surviving mansions reconverted to private residences.  In 2005 No. 48 was restored as a private residence and in 2009 it became home to Hal Prince and his wife, Judith.  The theatrical producer and director paid $12.5 million for the property and set to work creating what one real estate columnist called “highly personalized décor.”

The back wall of the neo-Georgian structure was replaced with glass.  There was now a four-story atrium, and in the basement a gym and staff suite.  On October 25, 2013 The New York Times reported that the “robustly decorated” town house had sold for $19.1 million. 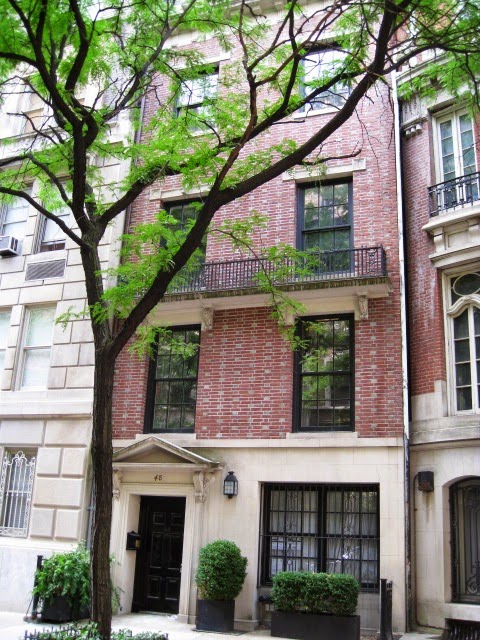 While not a nail head survives of S. Gages 1911 interiors; the exterior has been meticulously maintained.  And perhaps to Moses and Hannah Ehrenreich’s posthumous satisfaction, Frank Froment’s offensive house next door has been replaced by an apartment building.

non-credited photographs taken by the author
Posted by Tom Miller at 2:43 AM