In the opening years of the 20th century nickelodeons and theaters offered New Yorkers a fascinating new form of entertainment—the silent movie.  By 1910 more than a dozen theaters offered motion pictures along East 14th Street alone.

Marcus Loew was born on the Lower East Side in 1870, the son of Jewish immigrants.  Starting out as a newsboy, he worked his way up to owning his own newspaper and selling furs.  When he met fellow furrier Adolph Zukor, his life would take a drastic turn.

Loew’s fortunes soared and before long he was constructing his own buildings; and his motion picture palaces were intended to outshine the best of the legitimate theaters.  In 1907 Loew joined forces with architect Thomas White Lamb to design his theaters.  The arrangement would be mutually advantageous and by the end of his career Lamb would be responsible for the plans of more than 300 theaters in the United States, Australia, India, South Africa, England and Egypt (not all for Loew’s, of course).

In 1916 Loew acquired the properties at Nos. 235 and 237 West 125th Street occupied in part by the 12th Ward Savings Bank.  And now Lamb returned to his drafting board to design what would be Loew’s Victoria Theatre.

On May 13, 1916 Exhibitions World predicted “Loew’s Victoria will be the last word in the theater construction.”  The periodical said the theater would be “devoted to high class vaudeville and the very best of motion pictures.”

The Harlem area around the site was changing in 1917 from the all-white middle- to upper-class neighborhood of a generation ago.  Black New Yorkers, in an attempt to escape the prejudicial treatment of landlords downtown began moving north around the turn of the century.  Even here, however, the blacks were taken advantage of.  Later, in 1939, the WPA’s New York City Guide noted “Barred from most residential areas in the city, Negroes pay rents 50 per cent higher than those charged for comparable living quarters elsewhere.”

Yet it was still a vibrant neighborhood and motion picture theaters were cropping up along its avenues.  For the Victoria, Lamb melded an Italian Renaissance Classical facade with British 18th century Adams interiors.   Completed in September 1917, its exterior was clad in white terra cotta.  A grand, soaring colonnade, two stories tall, supported a dignified paneled parapet.  Inside were wall murals and in the 2,394-seat auditorium, a large and striking ceiling dome.  The boxes were set within triumphal arches.  The final construction cost was $250,000—a significant $4.25 million today.

With the new Victoria along West 125th Street were Hurtig & Seamon’s New Burlesque Theater (it would be renamed the Apollo Theater later in the century), the Alhambra Theater, Proctor’s, and the Hammerstein Opera House.  The strip would become popularly known as “Opera Row.”

Opening night was on October 3, 1917 and it was noteworthy.  On the bill that night were the silent films Barbary Sheep and Oh, Doctor!  The stars of both, Elsie Ferguson and Fatty Arbuckle, were present.  Vaudeville draws Raymond & Caverly, known as the Wizards of Joy, presented their new act “The Submarines,” and The Hirshcheff Troupe played in A Russian Wedding.  Also present was Loew’s good friend Irving Berlin.

The Victoria opened its doors every day at noon and ran continuously until 11 p.m.  Admission was 10 or 15 cents in the afternoon and 15 and 25 cents at night.  For the price audiences could see two live shows per day along with the movies.

The popularity of the theater is evidenced by the take in the armed hold-up on December 6, 1925.  Assistant Manager Irving Plumer and cashier Ada Maurice were counting the receipts from one of the ticket booths in the business office.  Suddenly the window to the alley suddenly burst.  They were faced with a revolver thrust through the broken glass as the thug ordered them to turn over the cash.

“The hold-up man, a well-dressed youth wearing a cap pulled over his eyes, ordered: ‘Give me that money.  Hurry up; give here quick!’” reported The New York Times the following day.  Plumer handed the two piles of bills to the thief who fled down the alley into the night.  The take was $351—a substantial amount considering the dime and quarter admission fees.

Although the Harlem neighborhood by 1927 was comprised of two-thirds of New York’s black population, there were still a significant number of Irish residents here.  Problems came to the Victoria in August that year when the motion picture The Callahans and the Murphys was screened.  The picture had already aroused protests in other theaters and so on August 26 there were two patrolmen stationed outside the Victoria.  But inside, when a scene depicting an Irish picnic started, two audience members initiated what The Times deemed a “row.”

Mrs. Alice Tennyson and Mrs. Katherine Tennyson shouted “Are you going to stand for this.  It’s a disgrace to the Irish!”  The New York Times reported “The shouts brought more cries, hisses and catcalls.”  Two other women, Mrs. Anna Skillan and Mrs. Mary Monahan joined in the disruption.  The two policemen rushed into the theater and when the women refused to desist, they were arrested for disorderly conduct.

But in 1927 it was not discrimination against the Irish that was most evident at Loew’s Victoria.  Black patrons were permitted only in the balcony.  African-American jazz musician Garvin Bushnell had moved to Europe in 1925 to escape discrimination and had established a successful career.  Now he was back in New York and according to James L. Conyers, Jr. in his African American Jazz and Rap, he set out on his own personal campaign against segregation.  He did so at Loew’s Victoria by “sitting down in the restricted section, wearing a Homburg hat, speaking with a British accent, and daring them to throw him out.”

Although live vaudeville came to an end at the Victoria in 1930, the Great Depression years brought another type of diversion—the talent contest.  On week nights the Victoria, along with most of the theaters on Opera Row, staged local talent contests.  It was the beginning of a tradition that created a national name for the nearby Apollo Theater.

As it had done on opening night of the Victoria, the Loew’s Corporation drew audiences with live appearances by stars on premiere night.  The choice of stars in August 1940 could be argued as either demographic marketing or inherent racism.  While Eddie Cantor appeared downtown at Loew’s Canal Theatre for the premiere of Forty Little Mothers; it was not Jack Benny, but Eddie Anderson--who played Rochester--who was sent to Loew’s Victoria for the opening of Buck Benny Rides Again.

From the late 1940s through the mid-1950s the Victoria was the scene of the Police Athletic League’s annual Christmas party for the underprivileged children of the neighborhood.  Each year thousands of youngsters would file into the theater for free screenings and gifts and candy from the PAL.

By the 1960s motion picture attendance nationwide dropped as families purchased television sets and stayed at home.  In response, the Loew’s chain initiated close-circuit large screen television viewings of live boxing matches.  In 1962 over 2,500 patrons—mostly black according to the New York Post’s writer Ted Poston who was there—paid $6.75 to see the Sonny Liston-Floyd Patterson fight in Chicago.  Poston described “hundreds of standees…scores of others crouching in the crowded aisles and…dozens of teen-agers who had slipped through a back door.”

The scene would be repeated for major bouts like that 1966 Clay-Williams fight and the 1973 Ali-Norton bout.

By now the Harlem neighborhood around the theater was impoverished and crime-ridden.  And so when the Dance Theatre of Harlem threw a “gala benefit” at Loew’s Victoria on November 13, 1972, wealthy New Yorkers were concerned about political correctness.  The following day The New York Times remarked “But after many a white liberal discussion about what one should or should not wear to Harlem in 1972 (let alone whether one should go or not), the partygoers finally got themselves together.”

People like Mrs. Alfred Gwynne Vanderbilt, Mayor Lindsay, Rod Steiger and Brock Peters were present that night and The Times said “When they arrived at the brightly lighted theater, Harlem was waiting for them behind police barriers.  Black children in bell bottoms, teen-agers in faded corduroys and adults in the worn cloth coats of the poor stood six rows deep to stare, whistle, cheer and comment as black and white women in minks, sables and even chinchilla climbed out in the middle of 125th Street.”

The newspaper added “If either black or white guests were afraid of what might happen to them on 125th Street, nobody, including Mrs. [Oscar] Hammerstein, admitted it.”  Mrs. Harold Reed told a reporter “Someone asked me, ‘Aren’t you afraid of muggers?,’ and I said, ‘Good heavens, No.’  I said, ‘I’m wearing my best fur coat and my best pearls.  Harlem is not a jungle.’”

The following year iconic French entertainer Josephine Baker held a benefit concert at Loew’s Victoria to aid the Police Athletic League.  When a New York Times reporter somewhat oddly asked her how she found Harlem, the chanteuse replied “Well it was night, and we have a saying in France, ‘Every cat looks black in the dark.’”
By the mid 1970s the Victoria could no longer command the first-run films being shown in midtown.  Instead it featured “mostly Kung Fu and action movies,” according to Philip Morrow, the director of development for the Harlem Urban Development Corporation a decade later.

Finally, in 1977, after six decades of screening motion pictures to the Harlem community, Loew’s Victoria shut its doors.  It was acquired that year by the Harlem Community Development Corporation.  After nearly a decade of mixed use the corporation issued an announcement in July 1985.  Harlem was on staging a come-back and Loew’s Victoria would be part of it.

The $2.6 million renovation resulted in Moviecenter 5--five theaters and a small restaurant.  Then, on November 27, 2007 the Harlem Community Development Corporation announced its latest idea.  “The plan calls for a 40,500-square-foot cultural arts condominium, a hotel with 170 to 200 rooms and 91 residential condominiums,” reported Cityrealty.  “The arts center will include a 199-seat theater to be used primarily by the Classical Theater of Harlem, a 99-seat theater for the primary use of the Harlem Arts Alliance, 10,150 square feet for the primary use of the Jazz Museum of Harlem, and 4,000 square feet of office space for the primary use of the Apollo Theater.”  Lamb’s façade would be salvaged.

The ambitious project ground to a halt in 2011 when an Environmental Impact Statement revealed that water seepage had led to “heavy mold growth, potential threats to the structural integrity of the building and other defects which…threaten to seriously undermine the long term viability of this historically significant structure.” 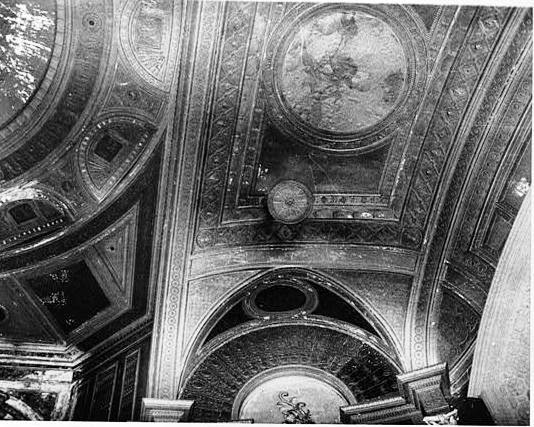 A revised project plan in 2013 suggested that “certain historic preservation measures” would be taken.  These include “restoration of its original lobby, façade, marquee and blade sign.”  Behind the lobby Thomas Lamb’s Adams-style auditorium would be demolished for a hotel and condominium structure and mixed use cultural center.

In the meantime, Loew’s Victoria sits boarded up.  Its once animated auditorium is quiet.  And the theater awaits its fate.
Posted by Tom Miller at 3:38 AM