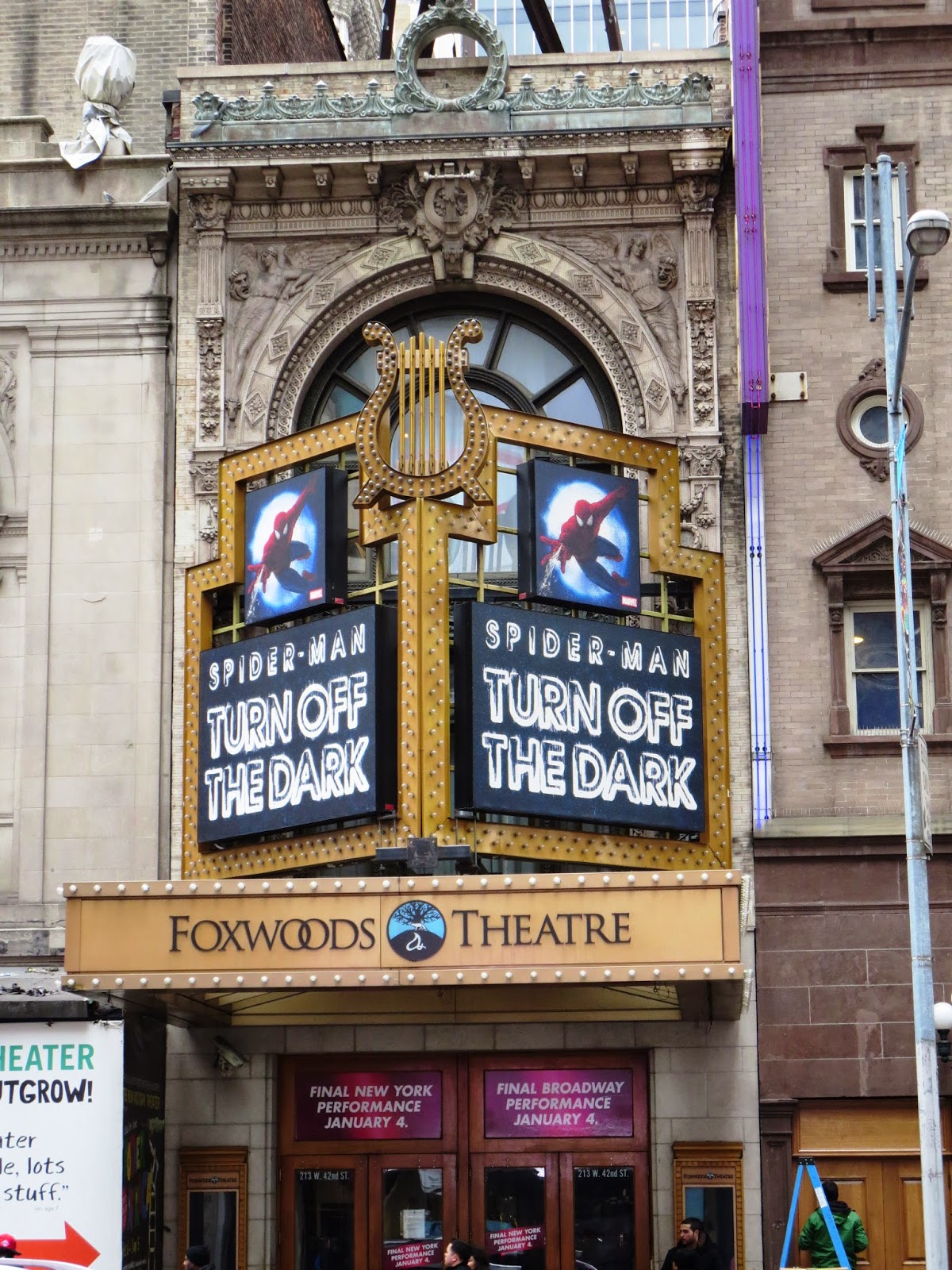 “The year 1903 will certainly go on record as the banner year for building theatres in New-York City,” wrote the New-York Tribune Illustrated Supplement.  Indeed, at the turn of the last century there was no longer any question that the theater and entertainment district had abandoned 23rd Street and was rapidly entrenching itself around Times Square.


On July 12, 1903, at the time of the Tribune’s assessment, there were six new theaters already under construction and three more planned to begin before the end of the year.  Among the flurry of rising theaters was the Lyric, being built by real estate developer Eugene C. Potter.


Just a few months earlier Potter had found himself scurrying to lease the house.  It was conceived as the venue for Reginald DeKoven’s American School of Opera.  But midway into construction the opera school failed.  The Shubert Brothers came to the rescue; and to counter the competition of so many new theaters, the brothers pulled an ace from their sleeve—Richard Mansfield.


The handsome and talented Mansfield was a matinee idol and a guaranteed box office draw.  Born in Germany, he started his successful stage career in London.  There suffered through a public relations disaster in 1888 when, while he was playing the title role in the Strange Case of Dr. Jekyll and Mr. Hyde, he was accused of being Jack the Ripper.  By now, however, the ugly incident was behind him and he was one of the most popular actors in New York.

The 10-year contract was not easily gotten and in order for the Shuberts to snag the somewhat arrogant thespian, architect V. Hugo Koehler was forced to slightly alter the plans. On March 31, 1903 The New York Times said “Before he would sign contracts to that effect, however, he stipulated that the star dressing room and some plans in the stage should be immediately changed to suit his ideas.”


The New-York Tribune reported “One of the peculiarities of the Lyric is a dressing room fitted up with a private bathroom, which, under contract, must be used only by Richard Mansfield himself, and must be hermetically sealed during such periods as Mr. Mansfield is away on tour and some other attraction plays in the theatre.”  The Shuberts, too, would make concessions.  “The managers also assert that in order to secure Mansfield as a permanent attraction each season they were compelled to sign a contract stipulating that no other serious dramatic actor or offering could be presented, but that light musical attractions must be the exclusive bill when Mansfield was on tour.”


Having secured Mansfield, plans could go forward.   Koehler studied theater plans and instituted ground-breaking changes to facilitate the flow of patrons, and easy egress in case of fire.  The entrance was on 42nd Street in the comparatively narrow frontage—the width of a brownstone home—embellished with limestone carvings and neo-classical motifs.  Two bas relief angels lounged in the spandrels of the two-story arched opening, one holding the mask of Tragedy, the other Comedy. 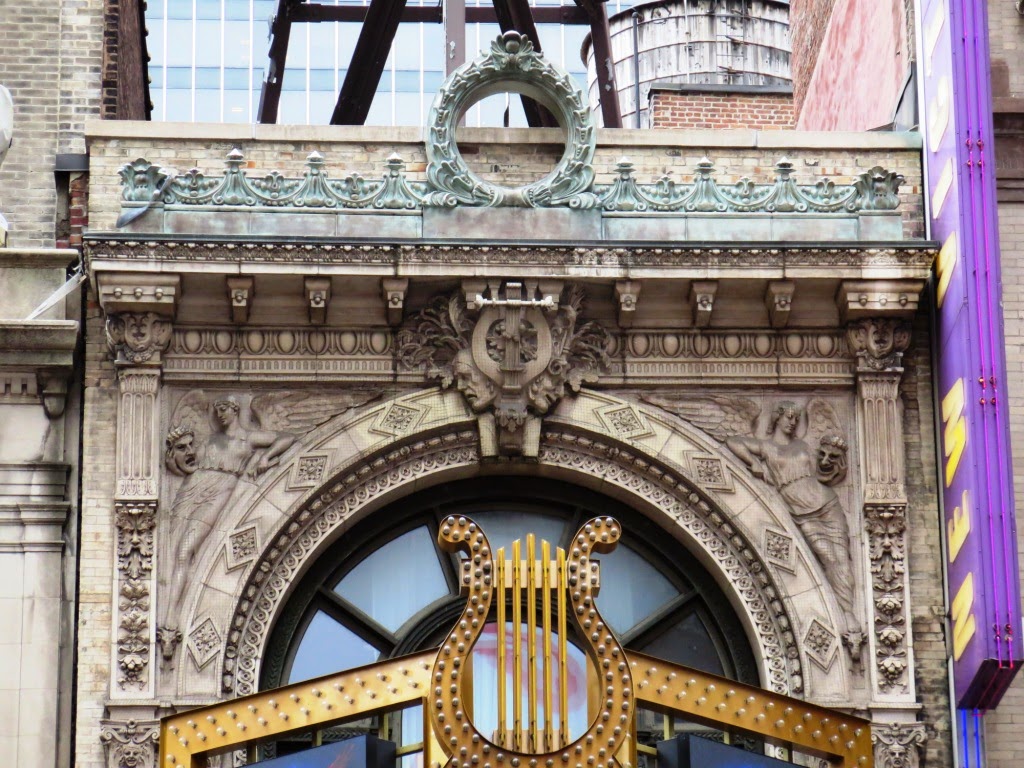 Patrons entered “simply a lobby leading into the side of the auditorium proper,” said the Tribune.  The relatively small lobby area exploded into the large auditorium which stretched through to 43rd Street.  Following the production, theater-goers would exit through the more expansive 43rd Street side—thus enabling a much faster emptying of the theater.  Interestingly, the architectural treatment of this facade bore little resemblance to the 42nd Street entrance.  Neo-classical wreaths, here executed in terra cotta, mimicked the copper wreath surmounting the 42nd street cornice; but the red and white brick, limestone and terra cotta 43rd façade shared little else.

Reflective of the theater’s name, the ornamental iron railing at the top floor was composed of lyres.  In the arches above the three central windows over the entrance were busts of William Schwenck Gilbert and Arthur Sullivan (the famous Gilbert & Sullivan team); and (too late to change) Reginald DeKoven.


The immense proscenium arch had been cast as a single piece of solid steel by the Milligan Brothers firm in Brooklyn.  Once it was constructed the task of getting it into Manhattan and the construction site was tackled.  On March 27, 1903 the Brooklyn Bridge was shut down as “the enormous solid steel proscenium arch of the theatre” was carefully and slowly transported across the East River.


The completed theater opened on October 12, 1903 with Mansfield playing in Old Heidelberg.  The American Almanac shortly afterward described the new venue.  “Its seating capacity is 1,700, and the style of the whole structure is classic-Renaissance in decorations and finishing.  The color scheme is apple green and Rose du Barry in combination.  The walls of the lower floors, together with the boxes, are covered with rich brocaded silk, and Rose du Barry in color.  The retiring rooms are of similar tones and the whole theatre is simple in its decoration and art.”

The New York Times was especially impressed with the entrance and exit corridors.  “They are both on the side of the hall, not at the end, which is entirely different from any other theatre in New York…They are easily accessible to the audience in case of any accident.  There can be no hurrying about, not knowing where to go—the corridors are right there, some twenty feet wide and staring everybody in the face.”


The day following the opening, The New York Times theater critic applauded Mansfield’s performance.  “It was reasonably certain at the outset that Mr. Mansfield, with his exceptional facility as an artist, and the unusual resources at his command both as actor and stage manager, would endeavor to make his production of ‘Heidelberg’ such a one as would reflect credit upon himself…and at the same time lend new beauty to the play, as far as English-speaking audiences are concerned.”

The critic was also appreciative of the Lyric’s seating, saying “the seats, with broad aisles facilitating easy entrance and exit, are quite comfortable enough to occasion thanksgiving on the part of those who have often suffered from the lack of just such accommodations.”


Mansfield was the main draw for the Lyric; but the Shuberts managed to book other top-named talent.  In 1904 Otis Skinner played Petruchio in The Taming of the Shrew.  “Mr. Skinner was interrupted over and over again by applause that could not wait apparently until he had finished his lines,” reported The Times on January 19, 1904.  A week earlier Douglas Fairbanks Sr. and Wilton Lackaye had opened in The Pit.


The Shuberts continued to intersperse Mansfield’s appearances with money-makers.  Minnie Maddern Fiske, most often simply billed as “Mrs. Fiske,” was widely considered the most important actress of the American theater.    She took the stage here in 1906.  Tyrone Power, Sr. and William Faversham played in Julius Caesar six years later.


As the United States was pulled into World War I, patriotism flourished at a time when changes in entertainment were taking place.  In 1918 the Lyric complement live theater with motion pictures.  On April 14 the New-York Tribune noted “’Over the Top,’ with Sergeant Arthur Guy Empey, begins its third week at the Lyric Theatre to-day, and announcement is made by Albert E. Smith, president of the Vitagraph Company, that the big screen story will continue indefinitely.”  Audiences not only saw the nationalistic motion picture, they heard live addresses by journalists and military men.

The films offered here were not just about the war.  On June 30 that same year the “photodrama” What Are You Going to Do With Us? premiered.  “It is described as filmdom’s first fact photoplay of the countless tragedies of the world’s women of the Third Estate, the story basing it being literally a transcript from the life incident to the crusade for a cleaner city of San Francisco,” explained the New-York Tribune.


After the war the Lyric alternated live shows with motion pictures.  Throughout the 1920s audiences would see Fred and Adele Astaire, The Cocoanuts with a score by Irving Berlin, the Marx Brothers and Margaret Dumont, and in 1928 the musical version of The Three Musketeers produced by showman Florenz Ziegfeld.


The Great Depression would signal the end of the Lyric’s successes.  The last was Cole Porter’s Fifty Million Frenchmen which featured hit songs like “You Do Something to Me.”  The Lyric’s last attempt at legitimate theater was Run, Little Chillun! which opened on March 1, 1933.


The grand theater, through financial necessity, became a motion picture house.  The interiors remained essentially unchanged throughout the decades until wide-screen movies prompted the owners to remove nine of the original boxes.  Although the Brandt Brothers—William, Harry, Louis and Bernard—hoped to reestablish the Lyric as a legitimate theater in 1979; it was not to be.  They refurbished the facades but the unsafe, unclean condition of 42nd Street in the 1970s, along with the general financial troubles of Broadway in general, prevented their plan.

Inside, the beautiful Lyric Theater had little changed since its doors opened in 1903.  But the 42nd Street Redevelopment organization condemned the structure.  Shuttered, the theater’s heat was shut off, and deterioration set in.


Despite the historic preservation movement that, by now, was taking firm hold in New York City; in 1996 Canadian Garth Drabinsky negotiated with the 42nd Street Redevelopment group, who gave him permission to destroy the old Lyric Theater.  The two facades were preserved and the Ford Center for the Performing Arts was erected between them.


Today V. Hugo Koehler’s two exteriors survive.  Behind the walls, however, the glorious interiors of green and rose are gone; replaced by clean lines of little interest.