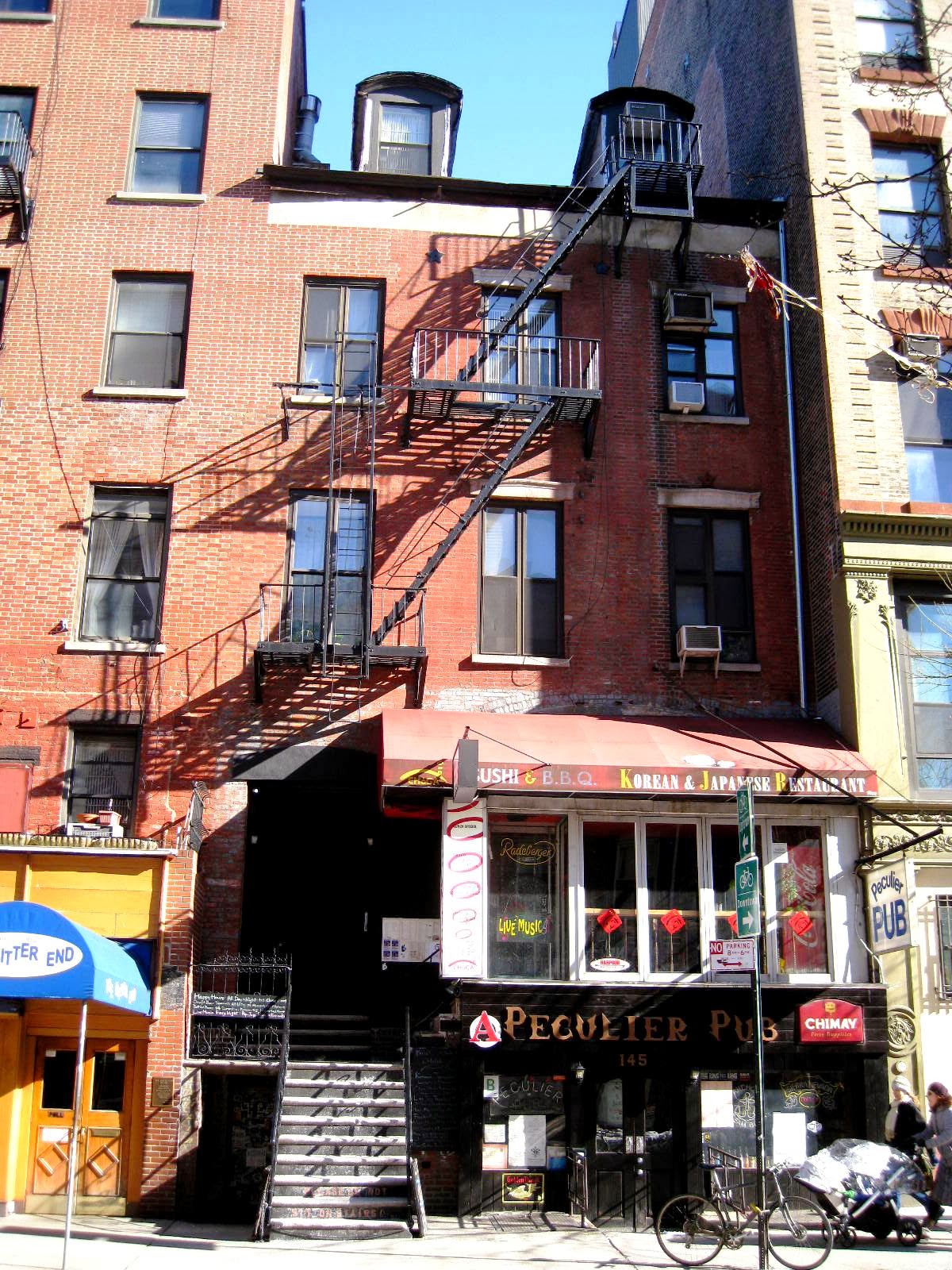 By 1830 Greenwich Village was profoundly experiencing a population and building boom.  Two years earlier the former potters’ field at the south end of the still-unpaved and vacant Fifth Avenue had been landscaped and converted to Washington Square.  When bachelor George P. Rogers erected his grand Federal-style mansion on the north side of the Square in 1828, he set the wheels in motion for a developing high-end residential area.


Developer Thomas E. Davis recognized the potential of the area, especially the 60-foot wide Bleecker Street two blocks south of the Square.  Around 1831 he began an ambitious construction project that would result in 15 rowhouses on both sides of Bleecker between Thompson and Laurens (renamed LaGuardia Place in the 20th century) Streets.


A common real estate marketing gimmick at the time, especially in Greenwich Village, was the renaming of single blocks to add high-toned character to the homes.  The clever, if confusing, practice resulted in Varick Place on Sullivan Street, St. Clements Place on MacDougal, and LeRoy Place on Bleecker between Mercer and Greene Streets, to name a few.  Davis joined the trend and convinced the city to rename his block Carroll Place, in honor of the last surviving signer of the Declaration of Independence, Charles Carroll.

Historians generally agree that architect Samuel Dunbar was responsible for the design of the homes.  When the rows were completed, there were seven on the north side of the street and eight on the south.  The discrepancy was caused by the generous width of the homes on the north—at 29 feet they were nearly four feet wider than their counterparts. 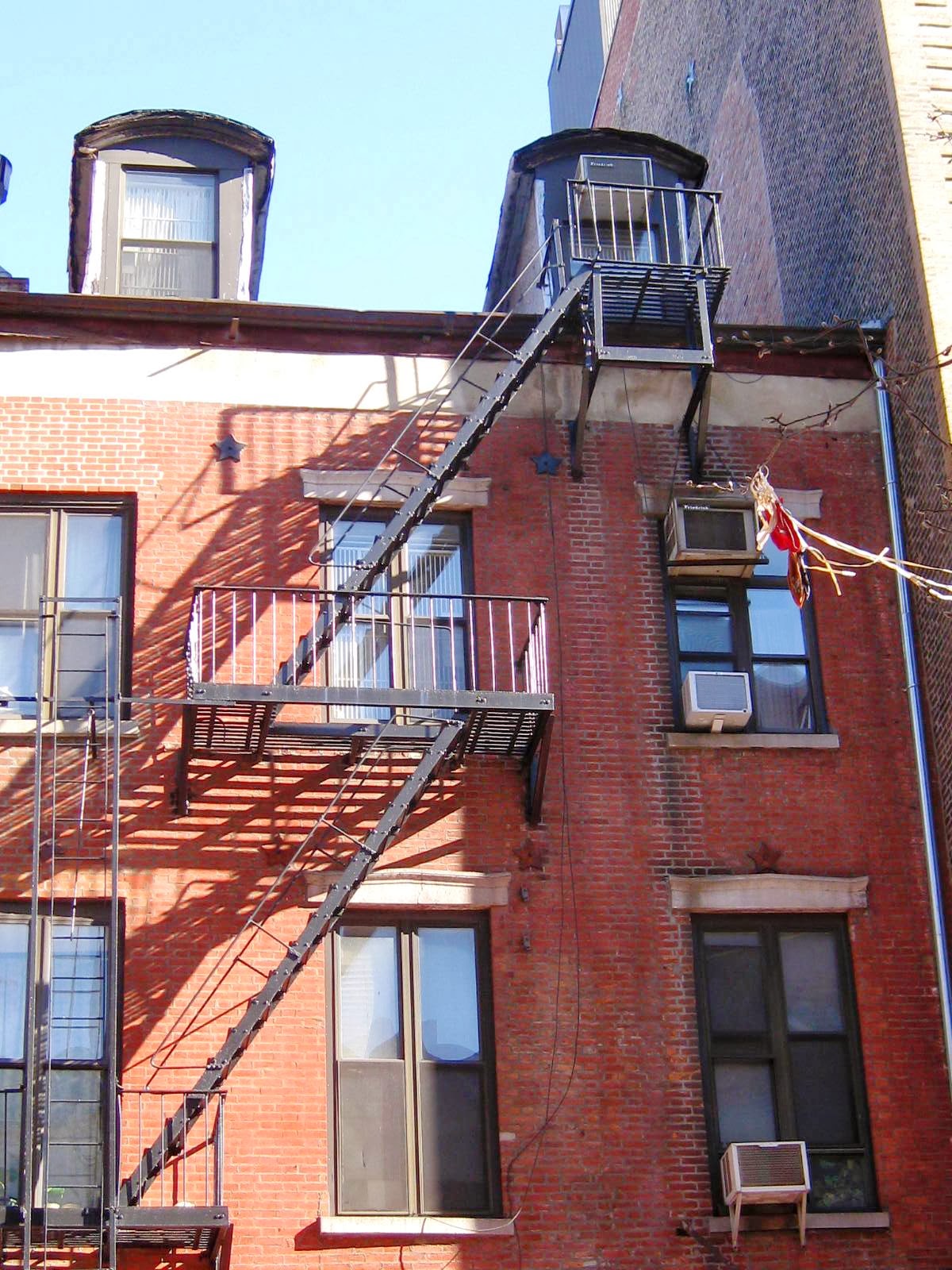 Among the first residents of Carroll Place were author James Fennimore Cooper and his family.  The Coopers had recently returned from Europe and Mrs. Cooper famously said the new house was “too magnificent for our simple French tastes.”  Most accounts place the Cooper family in No. 6 Carroll place; although at least one letter from Mrs. Cooper notes the address at No. 4


If indeed the Coopers lived at No. 6, they were gone by 1832 when it was home to James Watson Webb and his family.  Webb had been a Lieutenant in the Third U.S. Infantry and was editor of the Courier and Enquirer.  The Annual Report of the United States Military Academy decades later, in 1908, would remember him as “a man of striking and handsome appearance.”  Webb’s father, Samuel Blatchley Webb had been an Aide-de-Campe on the staff of General George Washington.


On July 1, 1823 had married Helen Lispenard Stewart.   Helen was the daughter of Alexander L. Stewart and the granddaughter of Anthony Lispenard.  Six children had been born to James and Helen Webb by the time they moved into the Carroll Street house—Robert Stewart, Lispenard Stewart, Helen Matilda, Amelia Barclay, Catherine Louisa and James Watson.  But infant survival was precarious at best at the time.  Baby James Watson Webb would die in the new house on September 20, 1832 at the age of seven months, only a few months after the family’s arrival.   His little brother Lispenard Stewart and sister Amelia Barclay had preceded him in death.


A year later another baby boy arrived.  Watson Webb was born in the house on November 10, 1833, followed by Alexander Stewart Webb on February 15, 1835.  Alexander would go on to an illustrious career—graduating from West Point and rising to the rank of General, then serving as the second President of the College of the City of New York.


The Webb family spent the summers at their country estate, Pokahoe on the Hudson.  But they would not keep No. 6 Carroll Place as their city residence for long.


In 1835 the prosperous and respected merchant Richard Suydam of Suydam, Jackson & Co., moved in to No. 6 from his home further downtown.  In his 1885 The Old Merchants of New York City, Joseph Alfred Scoville wrote “Richard…was a down town man, living at No. 6 Stone street, until 1820, and after that at 65 Pearl street, ‘close by the store,’ and in the good, old fashioned style of our ancestors, until 1835, when he, too moved up town to No. 6 Carrol [sic] Place, not near so cosy and so nice as it was at No. 6 Stone street, with the young Pennsylvanian wife in 1811.”


Richard Suydam and his “young Pennsylvanian wife” had five daughters—Mary, Caroline, Adeline, Jane and Louisa.  The wealthy merchant and his feminine household stayed here until 1858.  By now the wealthy residents south of Washington Square were moving further north, up Fifth Avenue.  Their grand houses were converted to rooming houses as immigrants poured into the neighborhood.


When exactly that fate befell No. 6 Carroll Place is unclear; but on August 21, 1863—the day that resident William J. Irving was drafted into the Civil War—it most likely had several tenants.  By now, too, the once-grand address had fallen away and the house was known as No. 145 Bleecker Street.


According to Dr. Emelise Aleadri in her 2002 Little Italy, the lower portions of the house were converted to business purposes in 1870 when Louis V. Fugazy founded his Banca L. V. Fugazy here “including public notary and travel agency;” and the J. G. Marsicano wholesale cheese company was here.  Upstairs, however, boarders continued to live; many of them Italian immigrants who were changing the face of section of Greenwich Village.


Life in the squalid rooms of No. 145 Bleecker was radically different from luxury experienced when the wealthy Webb and Suydam families lived here.  Tragedy spurred by jealousy visited the apartment of John Wilson and his wife in November 1874.  The Nashville Union and American reported on November 25 that Wilson “was devotedly attached [to his wife] and who loved her so ardently as to be consumed by a chronic jealousy of her, returned home one night, and, producing a revolver, told her he had made up his mind to shoot her.”


Mrs. Wilson realized there was no chance of escape and tightly closed her eyes and waited for the end.  “I was certain I as going to be killed, and, oh, how I dreaded the shot,” she later recounted.


Indeed, the shot rang out, then another, then another.  A total of five shots were fired before Mrs. Wilson opened her eyes.


“She did not know but that the first had killed her and the other four were perforating her inanimate corpse,” said the newspaper.  “Everything being quiet after a little, she opened her eyes to find herself still living, and her stupid husband with a bullet in each hand, and another in his stomach, while two others had lodged in the wall.”


John Wilson, moved by his wife’s resignation to death without pleading or struggling, had decided instead to kill himself rather than her.  The newspaper reported that “He was conveyed to a hospital, and will probably recover, to respect for life the silent courage which saved him from a murder most foul and most unnatural.”


The residents held blue-collar jobs; like Joseph Metzler, a tailor who lived here in 1875 and John Losin, described by The New York Times on July 8, 1883 as “an Italian bricklayer.”


At the turn of the century the commercial space was home to B. Schapiro, an “ostrich feather manufacturer,” and J. Emorozi whose company made coats.  Upstairs, in 1902, lived an Italian immigrant Mrs. Margarita Mulatza and her 11-year old daughter, Marie.


Mrs. Mulatza arrived from Sicily that year and moved into a furnished room at No. 222 Thompson Street.  An expert seamstress, she began earning money.  In the meantime another Italian named Alfredo “began to show her marked attention,” according to the Brooklyn Daily Eagle.


Having settled in, Mrs. Mulatza sent for Marie.  The Eagle noted that “though but 11 years old, Marie is well developed, and like her mother, a handsome Sicilian.”  Marie’s physical charms were not lost on Alfredo.  He immediately transferred his attentions to the girl and told her mother that some day he would like to marry her.


Before long Mrs. Mulatza and her daughter moved to No. 145 Bleecker Street in an effort to evade Alfredo, who had become a nuisance.  But the determined lothario finally found them.  “Mrs. Mulatrza ordered him away, and he went, but later returned with two pies, of apparently ordinary American manufacture,” said The Eagle.


Alfredo presented the pies to Marie as a token of his love with a gallant bow, clasping his hands over his heart.  Marie accepted the pastries; but having never seen an American apple pie before, she took only a small taste.


Her mother, on the other hand, was more than willing to eat both pies.  As it turned out the rejected Alfredo had poisoned the pies and Mrs. Mulatza spent a day in St. Vincent’s Hospital seriously ill.


Much more positive press would come when resident Valentino Casazza came up with a clever invention in the summer of 1913.  The Times Dispatch of Richmond, Virginia, was impressed.


“A window screen that not only keeps the flies and mosquitoes out of your house, but catches those flies in the hose that alight on it, and, reversed, catch those flies that try to get in at night, is a brand new invention that has every appearance of being the most valuable of all arrangements for fighting those dangerous pests, the house fly and mosquito.”


By 1946 the commercial space had become Salvatore’s Bar and Grill, owned by 26-year old Salvatore Spatola.  At 2:01 on the morning of October 21 that year the youthful bar owner attempted to repair a jammed cash register drawer.  He shoved his hand into a small metal door on the register’s side and, after feeling around for a few minutes, found his hand and wrist were stuck.


A patron came to his aid, then another, until finally ten bar customers were crowded around the barkeeper and the cash register.  Finally someone called the police.  Two patrolmen responded; but they, too, were unable to extricate Salvatore’s hand.


Police Emergency Square 1 was notified and Sgt. Harry McDonald and five patrolmen entered the bar.  Savatore Spatola now had 10 customers, seven policemen and a sergeant working to free him.  The New York Times reported that the policemen, “employing a hacksaw, screwdriver and pinch bar, worked for forty minutes before they were able to cut a section from the register.”


What was no doubt an embarrassing calamity to Spatola had a happy ending—other than his ruined cash register.  “The hand came out intact, except for minor bruises, which were treated at St. Vincent’s Hospital,” said The Times.


In 1952 the Green Room Studio opened in the building.  The off-Broadway playhouse presented Eugene O’Neill’s “Beyond the Horizon” in October 1954.  Then on August 1956 the Bleecker Street Theatre opened with Oscar Wilde’s “The Picture of Dorian Gray.”


Louis Calta of The New York Times was, unfortunately, not impressed with the new theater’s production.  “During the last three decades, there have been as many efforts to dramatize effective for the stage Mr. Wilde’s tale of a decadent soul.  But all have failed dismally.


“The latest adaptation by Justin Foster is no more successful than the preceding ones.”


Despite the  initial production’s bad reviews The Bleecker Street Theatre lasted several years.  It was replaced by The Children’s Own Theatre in 1960 which staged live plays for the younger set.  In 1962 it became the Washington Square Theater.


In 1966 the already well-abused house was converted once again.  An “eating and drinking establishment” took up the basement and parlor floors; while each floor above now contained two apartments.  Opening in the newly created bar-restaurant was the Dugout Tavern which advertised itself as having “Bohemian atmosphere, Victorian décor” and “sawdust on the floor.” 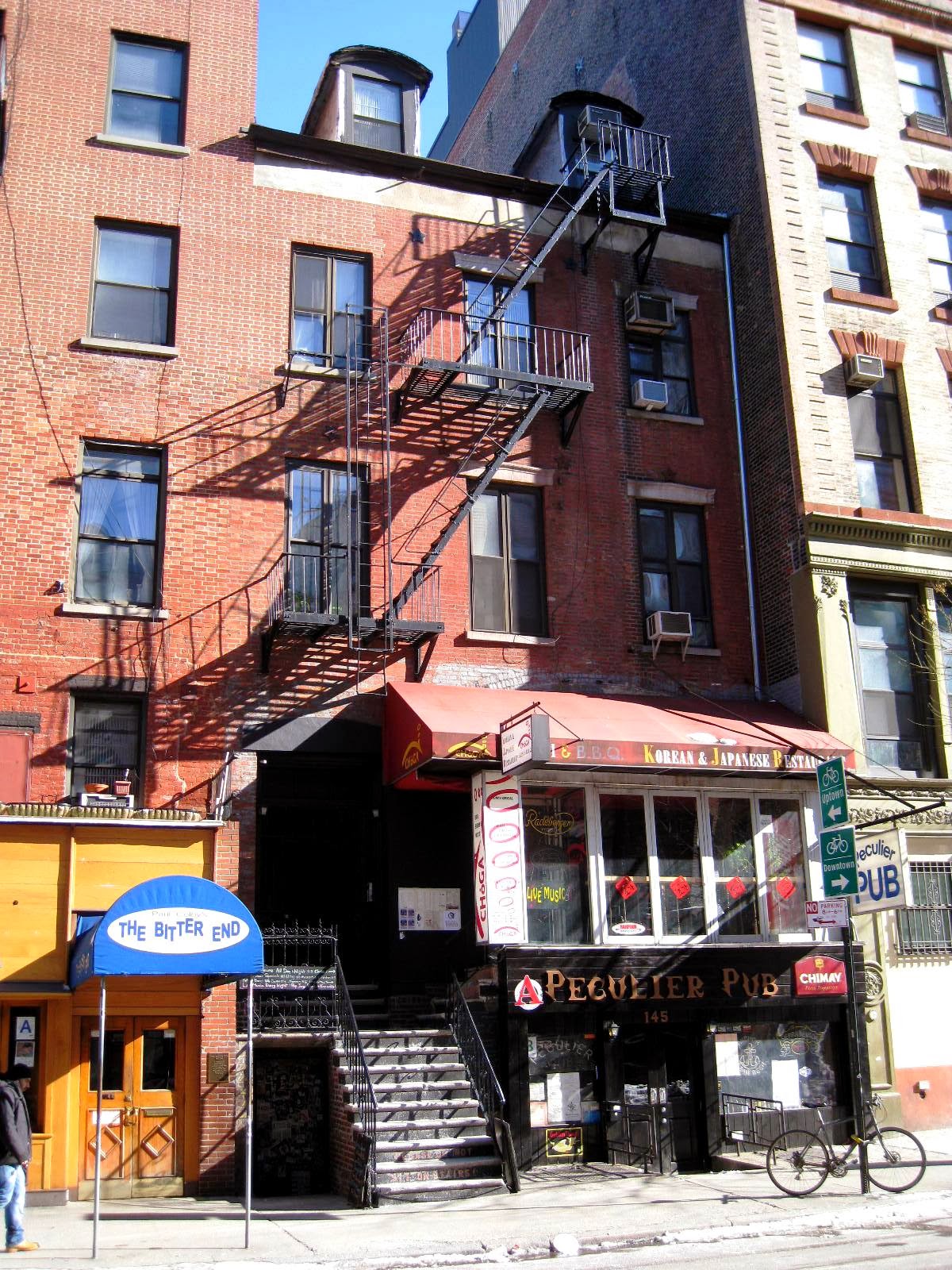 Today a tavern operates in the basement level and an Asian restaurant is housed in what was the Webb family’s parlor.  But above, some of the carved lintels survive, as do the two rooftop dormers.  With just a little imagination the passerby can envision the house 180 years ago when one of New York’s wealthiest families lived within its walls.