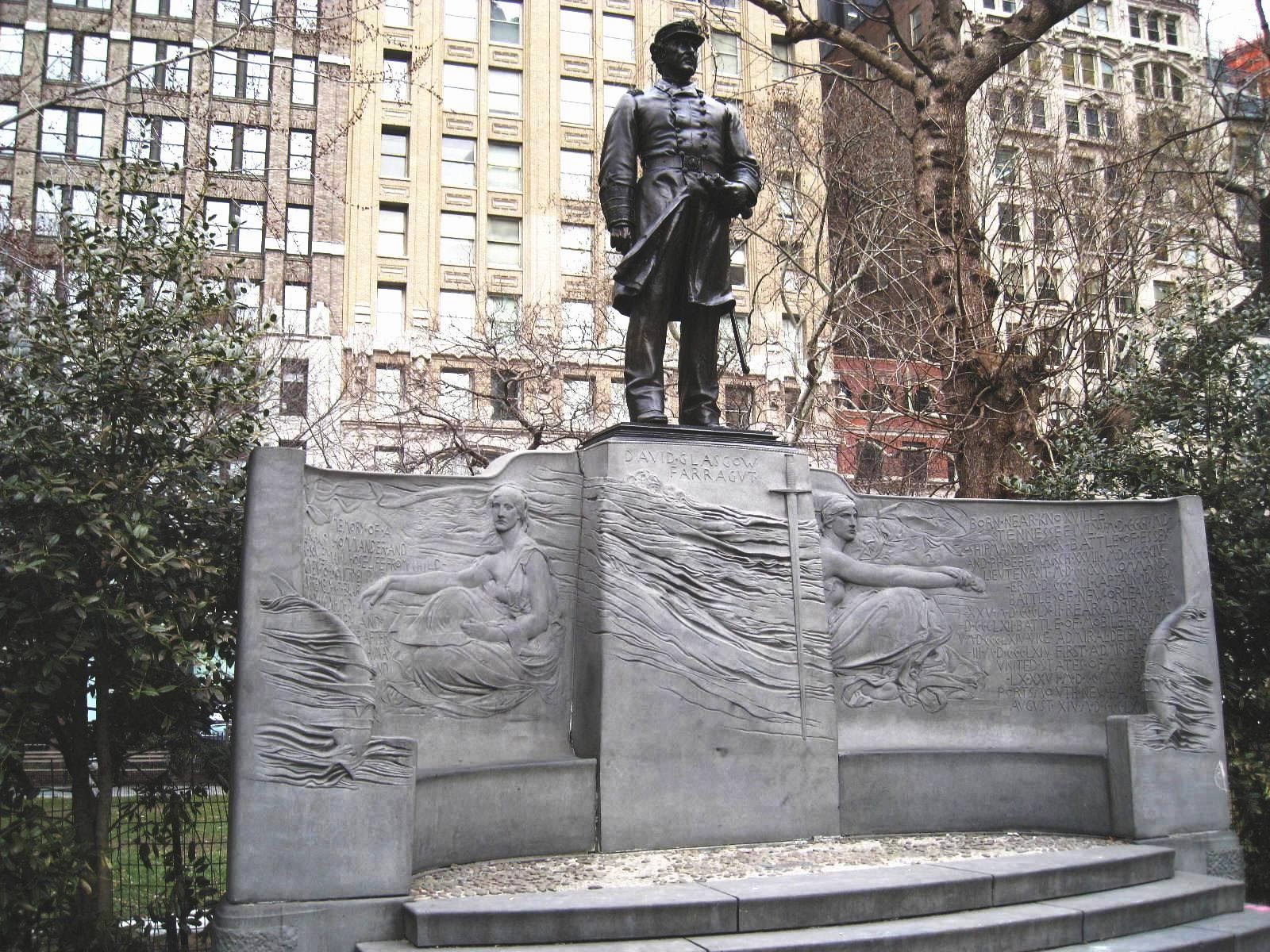 On December 12, 1870, when the Farragut Monument Association first met, Stanford White had been 18 years old for just over a month.  Within the year the untrained, aspiring architect would be taken on as the principal assistant to the illustrious architect Henry Hobson Richardson.   No one could anticipate that the teen-aged boy and the goal of the powerful gentlemen making up the Farragut Committee would cross paths.


The meeting was held in the residence of Moses Grinnell who was highly responsible for the development of Central Park.  The intention was to erect a statue to Admiral David Glasgow Farragut who had died a year earlier.  The New York Times reported that “It is intended that the monument shall be worthy of the memory of the great naval hero, and it is proposed to place it either in the centre of Union-square or of Madison-square, or at some prominent locality in Central Park.”


The association was composed of one clergyman from each of the religious denominations, “several prominent physicians and lawyers, the editors of each of the daily papers, and a large number of merchants.”  Also included were influential military leaders stationed in New York or in the area.


Individual donations toward the statue’s cost were not to exceed $100 and expectations, understandably, were that they would flow in rapidly.  Farragut had earned the admiration of the nation with a military career that would not be possible had he not started at the age of nine.


At only 11 years old he served in the War of 1812 on the frigate Essex, headed naval initiatives against Caribbean pirates in the 1820s, and saw action in the Mexican War.  A Southerner, he was forced to move from Virginia to New York State when Civil War broke out—his political leanings being toward the side of the Union.


During the War of Rebellion, Farragut led his men in repeated victories—some seemingly nearly miraculous.  It was during the fight to wrest Mobile Bay from the Confederates that he brashly gave the order that, at the time, seemed suicidal.  “Damn the torpedoes…Four Bells, Captain Drayton.  Go full speed ahead.”


Still an active admiral when he died, the high esteem in which he was held was evident when President Ulysses S. Grant attended his New York City funeral.  Now, a year later, the movement to honor him with a New York City memorial was well afoot.


While the committee was raising funds, Augustus Saint-Gaudens, the son of a French immigrant shoe shop owner, was studying art and architecture in Paris and Rome.    By 1876 it was time to choose a sculptor.  The committee vacillated between John Quincy Adams Ward and the almost unknown Saint-Gaudens.  According to Helen Henderson in her 1917 book A Loiterer in New York, "'Give the young man a chance,' said Ward; and the commission was passed to Saint Gaudens."

It was the 28-year old artist’s first substantial commission.  He began working on the clay model at his rented studio at 49 rue Notre Dame des Champs that year.  Five years later Saint-Gaudens was at work on the intricate and unusual base of the statue.    According to Henderson "When he returned to New York, he spent much time with Stanford White in designing and perfecting the pedestal, which was so to modify and amplify the civic traditions on this important subject."


The extraordinary stone exedra would represent the sea under the feet of the naval hero.  On January 28, 1881 The New York Times reported that “Augustus St. Gaudens is working on the two large allegorical figures in bas-relief which will decorate the pedestal of his Farragut.  The critic of the Revue des Deux Mondes devoted a page of praise to this statue.”


What The Times, nor any other newspaper, made note of was that the exedra had been designed by an up-and-coming force in architecture—Stanford White.  White had joined Charles McKim and William Rutherford Mead in 1879 and would be responsible for some of the most magnificent structures in America.  But for now, his design of the Farragut base went unsung.


By the middle of May 1881 the monument had been positioned in Madison Square, facing the monument to Major General William Jenkins Worth across Fifth Avenue.  A box containing newspapers, a book of Farragut’s correspondence, 1881 currency and the donor list was secreted below the base.  The sculpture was hidden from the curious public prior to its unveiling by a large pine box, deemed by The Times as “an unsightly mark in the square.”


The ceremonies were conducted on May 25.  A viewing stand for 400 was erected in the triangle below the Worth Monument and rows of benches and “camp-stools” were arranged along the 26th Street sidewalk for ticket holders.  A procession of bands, “a cavalcade of more than 200 mounted officers," carriages and civic figures started at 48th Street and took a full half hour to pass the reviewing stands.  The following day The New York Times reported that “The beautiful bronze statue of Admiral Farragut, just completed by Saint Gaudens, and placed near the north-west corner of Madison-square, was unveiled yesterday in the presence of a throng of distinguished spectators, and with an imposing military display.”


No mention of Stanford White appeared in the article. 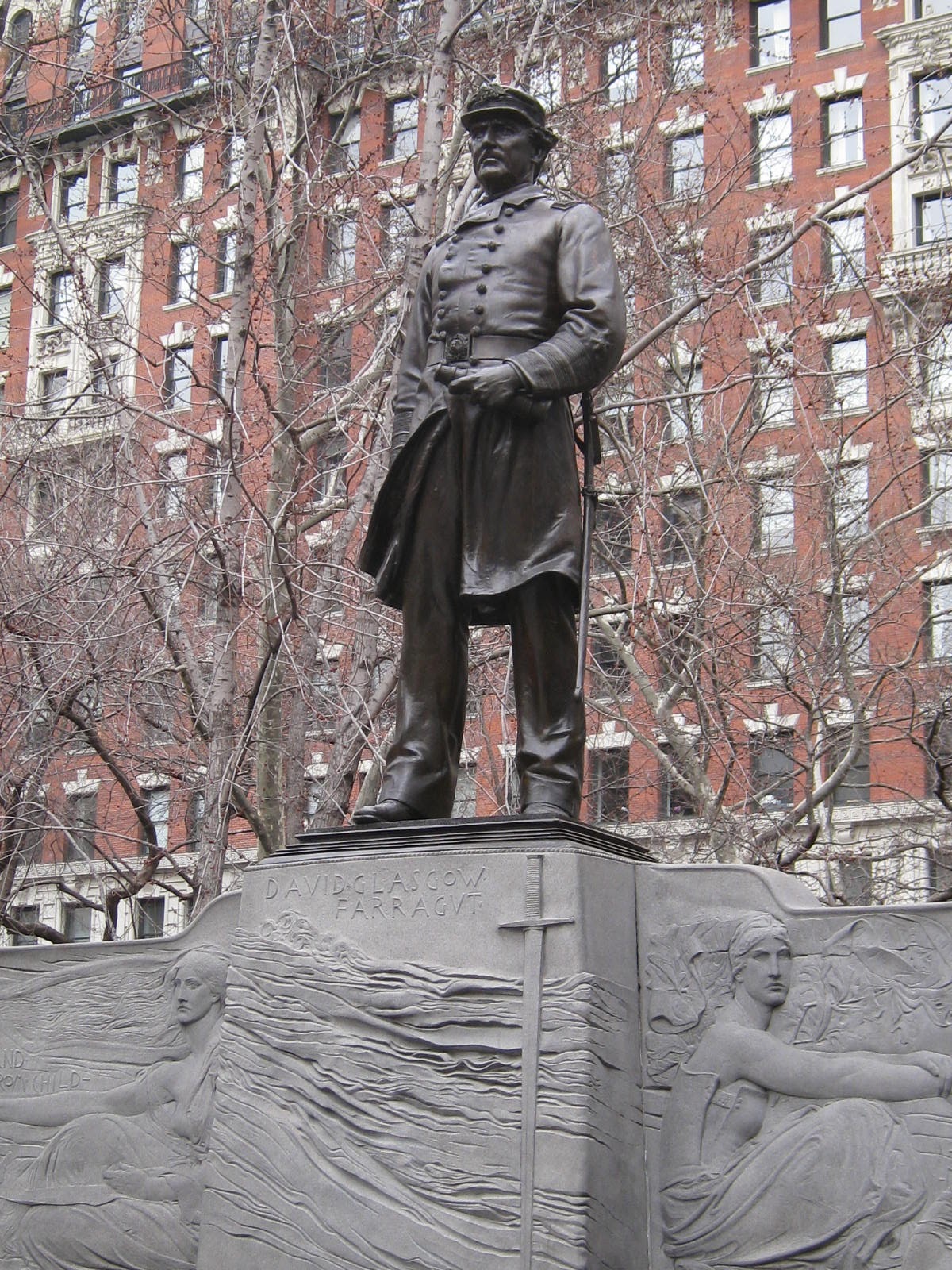 Saint-Gaudens depicted the admiral with binoculars in hand, as if standing on deck.  His naval coat spreads open as if blown by the sea breeze and he stares intently off to the horizon.  Even more captivating than the figure itself was the astounding stone exedra on which it stood.  The City had up to now imposed rules on pedestals and Saint-Gaudens threatened to withdraw his figure unless the exedra be "permitted" as designed.

Helen Henderson later reflected "The pedestal, like which nothing had been seen in this country, was much discussed at the time of its erection, and became the prototype of the numerous exedras which followed throughout the country."


Bas reliefs of Patriotism and Courage rest against either side of the plinth.  A turbulent ocean is depicted by swirling waves and white caps.  The curve of the base, which forms a bench, terminates on both ends with plunging dolphins amid the waves.  The floor of the monument, three steps above the pavement, is paved in beach stones, tumbled smooth by the waves, to represent the sea floor.  Imbedded in the pavement is a bronze crab.  Along the front of its shell is engraved “Augustus Saint-Gaudens Sculptor” and along the rear, “Stanford White Architect.”


The monument immediately received critical acclaim.  But no critic, mostly likely, was more important to Augustus Saint-Gaudens than the one he stumbled across in the park a few nights later.


In November 1919, author and former president of the Century Club William Webster Ellsworth recounted to a reporter from The Sun a heart-warming memory.


“I remember walking home one night from one of Gilder’s Friday evenings with Mr. and Mrs. Augustus Saint-Gaudens.  It was soon after the unveiling of Saint-Gaudens’s noble statue of Farragut in Madison Square and as we came toward it we saw an elderly man, with his hat off, standing motionless in the moonlight, looking up at the statue.  ‘It’s father,’ whispered Saint-Gaudens in surprise, for the old man had been reluctant to notice his son’s work.  “Why, father,’ he said, hoping for the long deferred word of approval, ‘what are you doing out here?’  ‘Never you mind,’ was the gruff response, ‘I am attending to my own business.’  He kept a little shoe shop on Fourth avenue near by, with the sign ‘Cordonnier pour dames’ over the door, and he had come out in the night to see the work of his son, whom his savings had sent to Cooper Union and across the ocean to study in France.  As for praise, however—that was another story.”


In 1893 the first sign of disrespect to the statue was noticed.  On March 30 that year The Sun reported that “Commissioner Gray said that some mischievous youngster had plugged one of the eyes of Admiral Farragut with tar, and that the Madison square statue had suffered in appearance.  Superintendent Parsons was ordered to remove the asphaltum patch from the Admiral’s eye.”


As automobiles replaced horses and New York’s population swelled after the turn of the century, a widening of Fifth Avenue was deemed necessary.  In 1909 the Farragut memorial was moved back into the park a few yards.  Three years later more serious vandalism than tar in the eye was noticed—thieves had made off with the sword straps, cast separately from the figure.  Eventually the bronze tassel hanging from the sword would be stolen as well.


By now the monument for which Stanford White received little notice had as its background the architect’s magnificent Madison Square Garden.


On October 15, 1936, eleven years after Madison Square Garden was razed, the Parks Department dismantled the Farragut Monument for restoration and relocation.  The bluestone exedra was damaged beyond repair and sculptors, employed by the Works Progress Administration, set to work executing an exact replica in more durable black granite.  The $25,000 restoration included complete overhaul of the 9-foot tall bronze statue and was completed during the summer of 1939.


The monument, which now sat on the northern fringe of the park, was restored again in 1986 and in 2002 (when the entire park was rehabilitated).  And finally, over 130 years after its unveiling, Stanford White is getting his co-star billing with Augustus Saint-Gaudens for this exquisite example of civic art. 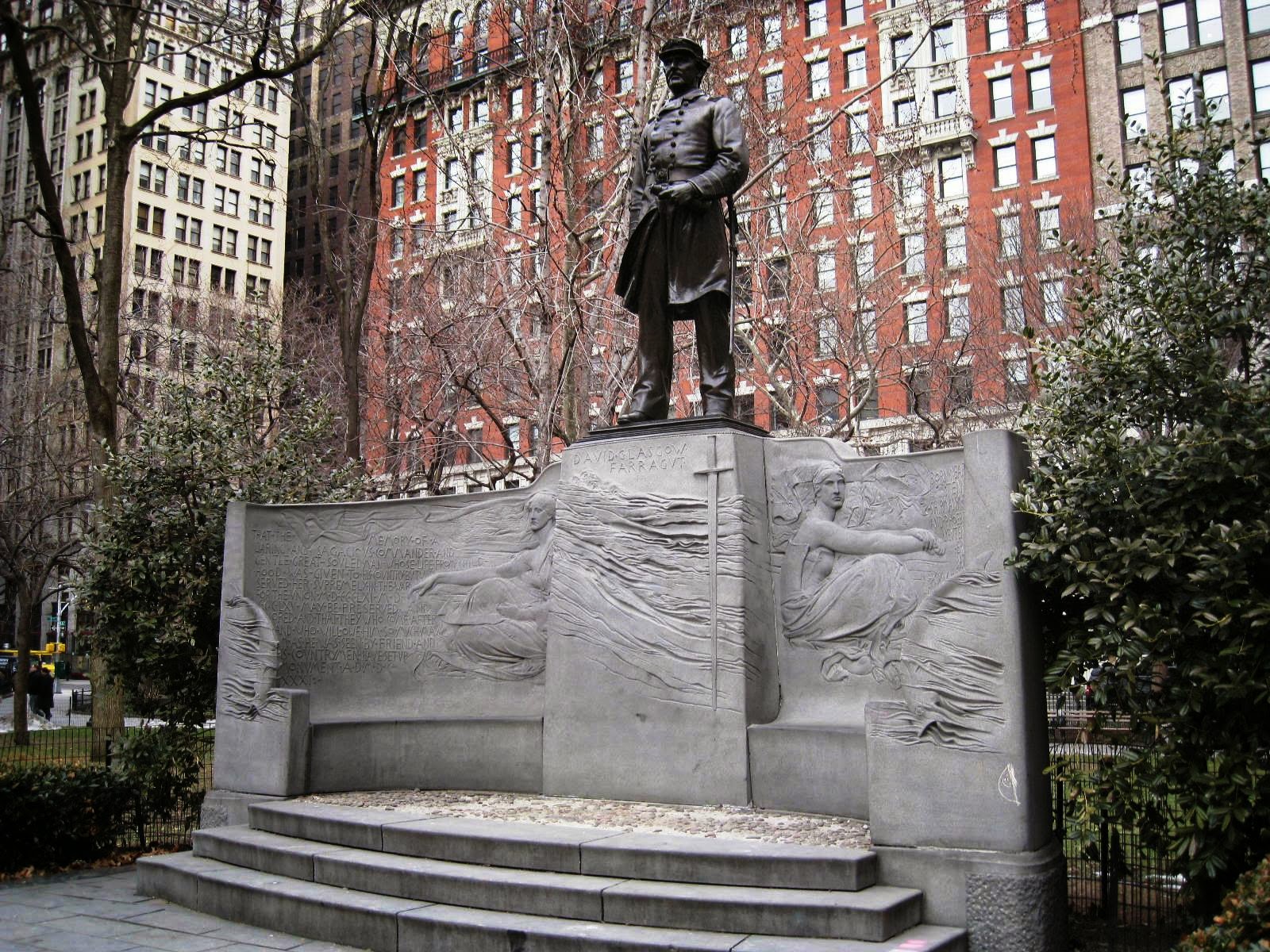 photographs taken by the author
Posted by Tom Miller at 3:11 AM