In 1878, as the Paris Exposition was being organized, New Yorker David Maitland Armstrong was made director of the American art section.  On the continent—and indeed in many drawing rooms of America’s wealthy-- the concept of “American art” was laughable.  When the Exposition was over, no one was laughing.


The New-York Tribune reported “the result was one of the great triumphs of his career and resulted in his election as a chevalier of the Legion of Honor.  It was the real initiation of the French people into a realization that such a thing as American art existed.”


Nevertheless, American art and architecture students who studied at the Ecole Nationale et Speciale des Beaux-Arts in Paris came home with a special prestige.  Those lucky—and wealthy—enough to attend to Ecole received what was at the time the world’s most esteemed training in classical, academic architecture.


In 1893 a group of architects who had studied at the Ecole formed the Society of Beaux-Arts Architects.  The organization was intended to bring the principals of French design and composition to America; as well as to carry on the discipline and concepts of the French academy.


The Society broadened 23 years later when in 1916 it founded the Beaux-Arts Institute of Design.  Aspiring architects could now receive instruction in the French tradition in New York under a provisional charter of the University of New York.  The private stable of millionaire Jacob Schiff was purchased in 1914 and by 1915 the Institute was fully established in its new home.


The institute soon expanded—offering courses in the decorative arts (sculpture and painting), followed by interior decoration in 1921.  To enable students to study here for free (only a registration fee was required), funds were raised through the annual and fashionable Beaux-Arts Ball (a lavish costume ball), the sale of advertising in the Society’s yearbook, and general contributions.


By the early 1920s it became obvious that the old stable building was no longer adequate.   Growth and added areas of study were taxing the old space and certain departments—mural painting and sculpture, for instance—required large areas.  In October 1927 two old rowhouses at Nos. 304 and 306 East 44th Street were purchased for $85,000.  The old school in what was now Manhattan’s most exclusive residential district was sold for about twice that amount.


A competition for the design of the new Beaux-Arts Institute of Design was initiated and a jury of six was selected to choose the winning entry.  Professional architect members of both the Beaux-Arts Institute of Design and the Society of Beaux-Arts Architects were informed on October 13, 1927 that the competition would be held a month later, on November 17, 1927 at 12:00.  The winner would be chosen at 4:00 that same afternoon.


Seventy-two of the nation’s most respected architects submitted designs, among them Raymond Hood, William Lamb, Ralph Walker and Chester Aldrich.  The applicants had been given a precise list of design requirements.  At 4:00 on the afternoon of November 17 the winning design of British-born Frederic C. Hirons, of Dennison and Hirons, had been chosen.


Plans for the four-story structure were not filed with the Bureau of Buildings until February 4, 1928.  In reporting on the filing, The New York Times noted that “Dennison & Hirons, the architects, estimate the cost at $100,000.”  That amount—about $1.3 million today-- hinted at a formidable new building.


Six months later the newspaper updated its readers on the progress.  “Work is progressing rapidly on the new home of the Beaux Arts Institute of Design at 304 East 44th Street,” it said.


“An outstanding feature of the building will be three polychrome terra cotta panels in the façade, ranking with the finest work of that kind in the United States.  The colors will be shaded and blended as if done in oil or water colors.  They will picture the Parthenon in Athens, St. Peter’s Church in Rome and the court yard of the Ecole des Beaux Arts in Paris, those three cities being symbols of sculpture, painting and architecture.”


The Times noted that at the time the institute “has several hundred members.”


In 1928 the fluffy, overly-ornamented Victorian and Edwardian building styles had given way to Art Deco—the visual arts style born in France following the war.  The sometimes brassy new style looked to celebrated the modern age in bold colors, sharp geometric shapes, and stylized forms.  The style would result in ziggurat skyscrapers, chrome-covered diners, and lavish lobbies that would represent, for decades, the visage of Manhattan world-wide.

Hirons’ completed buff brick building was a severe study in no-nonsense Art Deco.  With no zig-zagging lighting bolts, no stylized waterfalls and none of the Rockefeller Center glitz; it made only temperate use of visual design.  Two Greek-styled sculptural panels depicting architecture flanked the parapet at the fourth floor and carved Art Deco capitals capped the muscular brick three-story piers.  Above the double-height entrance, gutsy Deco lettering announced the Institute’s name.  Three limestone blocks at the second floor openings were intended to hold sculptural allegories of Painting, Sculpture and Architecture; but the plan was never executed when the necessary funds were not raised. 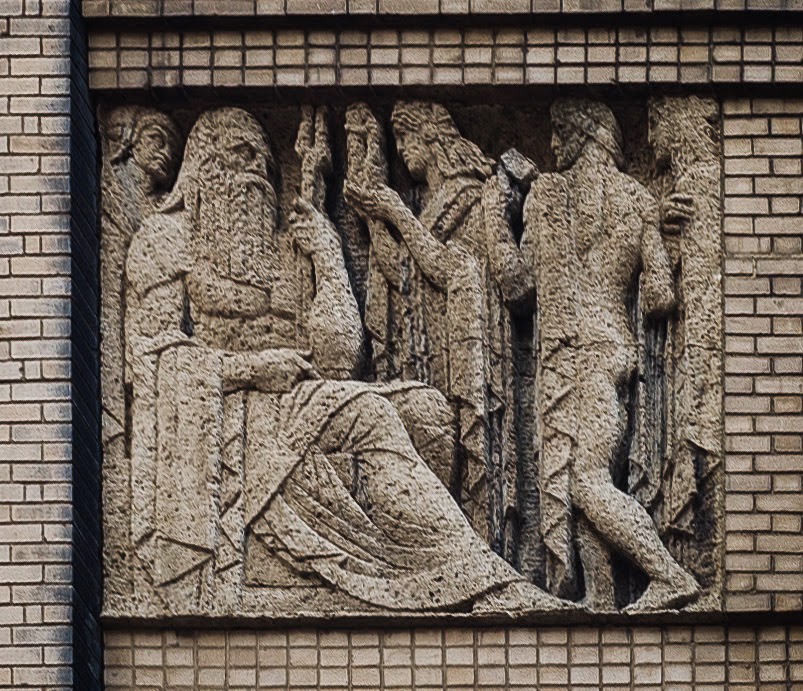 The piece de resistance, of course, was the three terra cotta panels described earlier by The New York Times.   Designed by Hirons’ favorite architectural sculptor, Rene Chambellan, they were produced by the Atlantic Terra Cotta Company.  (Hirons and Chambellan were already working together on a new project--the Art Deco State Bank & TrustCo. Building on 43rd Street and Eighth Avenue).

With the Institute in its new home, the Society continued its regimen, including the annual Beaux Arts Ball.  On January 24, 1930, despite the ongoing Great Depression, the event did not hold back on the expected grandeur.  Noting that “The proceeds of the ball are devoted to the education work of the Beaux Arts Institute of Design, which gives instruction in architecture, painting and sculpture to deserving students,” The New York Times described the upcoming Ball on January 5 at the Astor Hotel.


“This year the grand ballroom, to be known as ‘il Palazzo,’ will be decorated to represent the great central court of the Palace of Lorenzo the Magnificent in Florence.  From the main cornice surrounding the court, enormous drapes of red and gold will be suspended and these will be drawn apart with golden cords and tassels to reveal the balconies in which the nobility will assemble to view the historic pageant.”


The “pageant” was to represent scenes in the French court during the Renaissance and the court of Ferdinand and Isabella of Spain.  The cast of the production included more than 300 “people of high station in society and the arts.”


The north ballroom, said the newspaper, “will be styled ‘il Cortile’ and will be treated as a walled garden through which the entrance to the grand ballroom will be made.  The south ballroom will be called ‘il Mercato’ and all the wares appropriate to the market place will be displayed lavishly therein.”


The Times described fountains, statuary, vases and flowers and added “The splendor of this setting will be further enhanced by the throng of several thousand guests, all garbed in the luxurious costumes of the Renaissance.”


Within the next decade the Beaux-Arts Institute of Design building was purchased by the Reeves Sound Studios and converted to offices, recording studios, editing labs and viewing theaters.   Today it is home to Egypt’s Permanent Mission to the United States.


Despite its several uses since the 1940s, Frederick C. Hirons’ brawny Art Deco design manifested in brick is virtually unchanged.  It is a much overlooked treasure on an otherwise unexciting block.
Posted by Tom Miller at 2:56 AM