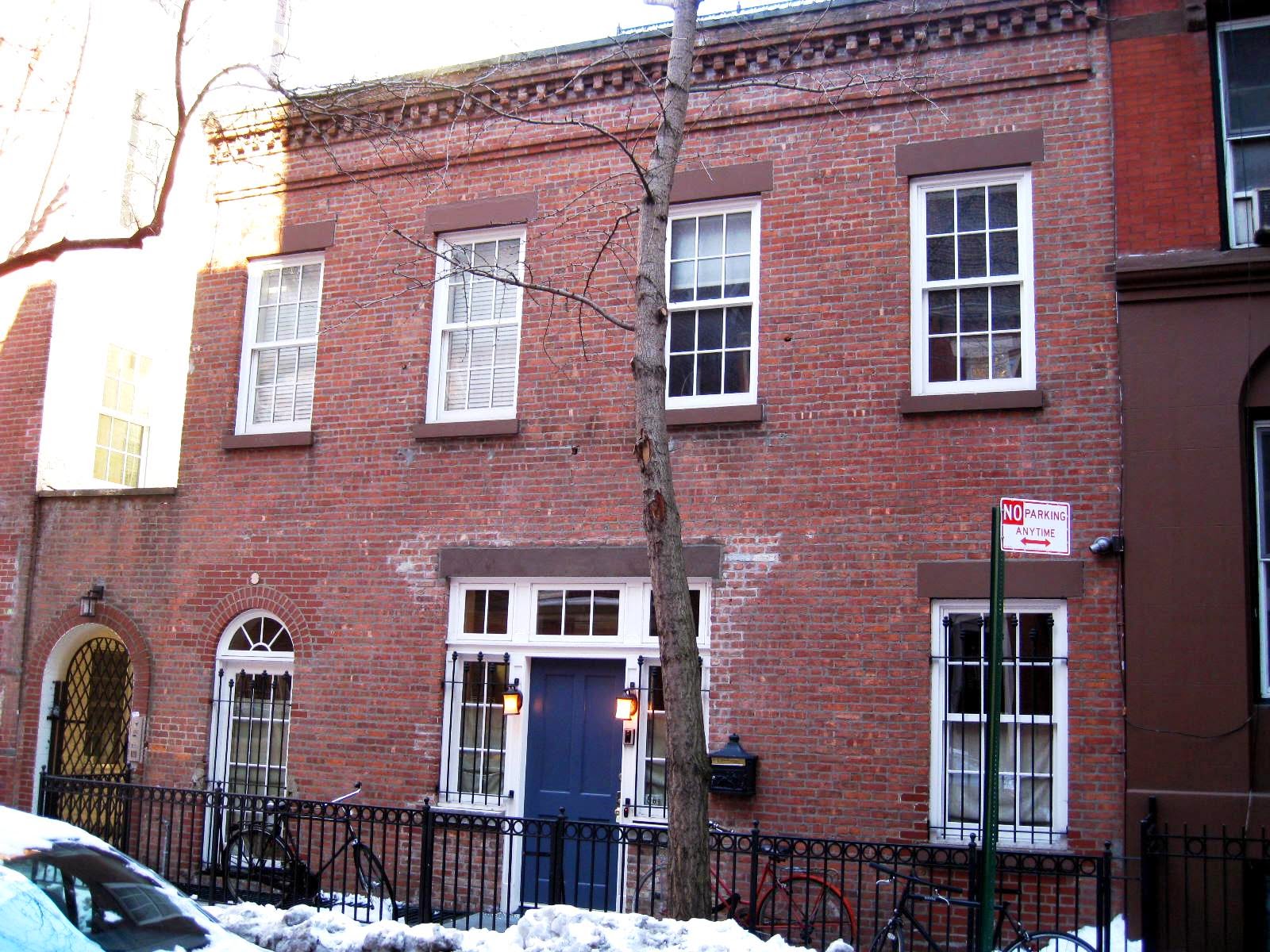 In 1888 John F. Asmussen lived at No. 355 Bleecker Street between West 10th and Charles Streets.  A respected member of the Greenwich Village community, he currently served as Sexton in the nearby St. John’s Church on Christopher Street.  Within the year he would embark on a real estate project that involved demolishing the old house at No. 56 Barrow Street.


The block of Barrow Street between Bedford and Bleecker Streets was lined with quaint brick homes of the 1830s along with later Victorian structures.  The house at No. 56 Barrow Street had become a rooming house by 1855 when carpenter Harvey Depew and Charles Miller, who made his living as a hatter, lived here.  Both men volunteered as members of the Howard Engine Company No. 34 at the corner of Christopher and Hudson Streets.  Resident W. Johnson received what was possibly unsettling news on March 17, 1865 when his name was pulled in the draft lottery to serve in the Civil War.


Now, in 1889, the house was pulled down to be replaced by John F. Asmussen’s new livery stable and carriage house.  Designed by the architectural firm of Jordan & Giller, the brick-faced structure quietly melded into the streetscape with little ornamentation other than the fine dentil-molded brick cornice.  Two stories tall, its windows and carriage opening featured flat brownstone lintels.


Asmussen apparently garnered extra income from running a livery stable from his new structure; but it also served to house his personal horses and vehicles as well.  He owned at least one wagon which he was driving on July 6, 1901 along Central Park West near 68th Street.  When a streetcar operated by the Metropolitan Street Railway Company collided with Asmussen’s horse-drawn wagon, a near tragedy occurred.


He was thrown out of the smashed wagon, resulting in both of his arms being broken.  He subsequently marched into the law office of William C. Timm and filed suit against the streetcar company, asserting that along with his broken arms he “was bruised and wounded in various parts of his body, and was, and still is, suffering great pain, and was, and still is, prevented from going on with and attending to his business, and is, as he believes, permanently injured so that he will never be as strong or able to carry on said business as efficiently as before.”


In addition to his “great pain and suffering” Asmussen had to pay $60 to repair his wagon, including repainting it—a not-insignificant $1,500 today.   Both William C. Timm and his client felt that $30,060 dollars would be sufficient to settle the case.  Not surprisingly, the Metropolitan Street Railway Company disagreed.

Intrigue visited No. 56 Barrow Street in 1919 when Mrs. Florence Chris was living upstairs.  Every morning around 11:00 she would sit in the window with her invalid son for an hour or so, watching the comings and goings of people on the street below.


Across the street, at No. 80 Bedford, on the corner Barrow Street, was vacant saloon in a building owned by 71-year old Charles A. Knapp.  The old man, who lived in Montclair, New Jersey, was a retired insurance man.  Called by The Sun a “little old fashioned realty owner,” he was a familiar figure in the neighborhood and was well-known for often wearing a modest ruby stick pin with two pearls in his tie.


Since John Lawrence had closed his barroom, Knapp had visited what The Sun called a “gloomy structure” to feed the two cats Lawrence had left behind, and to arrange for the dismantling of the saloon.  The Knapp family had owned the three-story building for over a century and Mrs. Chris later told detectives that “I have noticed Mr. Knapp going to the place almost every day.”


And so it was on Wednesday January 8, 1919.  An auction of the saloon fixtures had been held a few days before and Knapp was in the process of having them removed and repairs done to the old building.  That morning, as Mrs. Chris and her son watched, Charles Knapp unlocked the side door and entered with a man wearing a blue workman’s jumper.  The mysterious man, she said “held a small paper parcel for Mr. Knapp while the old gentleman was unlocking the padlock on the door.  They entered and I did not see either of them come out, although I remained at the window until shortly before 12 o’clock.”


An hour later a glazier arrived for a 1:00 appointment with Knapp.  The side door was unlocked and inside he found the old man dead on the floor.  The murderer had shot him in the back of the head and cut his tie below the knot, making off with his stick pin.  Police wondered if the murder could be the result of a disgruntled tenant evicted from one of the Knapp buildings, since $60 in cash and a check for $116 was left on the body.  They ruled out the local gang members.  “Inspector Cray said last night that he doubted whether the shooting was the work of ordinary gangsters and he was inclined to absolve the Hudson Dusters from suspicion.”


In the meantime No. 56 Barrow Street and Mrs. Florence Chris received much attention and press coverage as the mysterious slaying was investigated.


As the excitement prompted by the tragic murder eventually abated, the little brick building remained out of the spotlight for years.  When Thomas M. Bevans purchased up six buildings on the corner of Bedford and Barrow, including No. 56, residents may have wondered about the fate of the structure.  But it survived and by the 1970s was a gritty, neglected building where tenants upstairs coped with falling plaster and vermin.


On August 8, 1973 a 28-year old advertising copyrighter for Macy’s Department Store headed home to her Hudson Street apartment building for lunch.  As she reached the street door, Roberta Herbert was attacked by Hosie S. Turner, a 39-year old heroin addict.  As he plunged a knife into the woman, she screamed “Somebody help me!”  Construction workers who heard the cries pursued the fleeing felon.


Police took up the chase as Turner disappeared somewhere along Barrow Street.  Before long he was discovered by Police Officer William Whitaker hiding behind the boiler in the basement of No. 56.  In his pocket was the $7 he had stolen from the young woman he had left dead on the sidewalk.


In 2005 Margaret Streicker Porres owned No. 56 Barrow Street.  The New York Times said she “has built a business out of buying, managing and restoring run-down landmarked buildings populated with rent-regulated tenants.”  The newspaper said she “sees herself as preserving and rebuilding New York’s older buildings for future generations.”


Despite all of that, she sought a demolition permit for No. 56 Barrow in 2005.  The permit never came to be and on April 17, 2007, writing for The Times, James Barron disclosed some of the tenants’ frustrations.  “Their long list of complaints includes hallways that were without lights for several weeks last summer, fireplaces that can no longer be used and apartments where mice are regular visitors.”


Resident Nestor Palacios said he and his 6-year old daughter slept in their coats and he hesitated to turn the lights out at night because the mice would come out.  “I have a hard time falling asleep, waiting for them to crawl over me,” he told Barron.


The turn-around came in 2009 when the building was renovated into three spacious apartments.  The former carriage bay is now the main entrance and while the alterations to the street-level openings are noticeable; they are handsomely done.  James Asmussen’s livery stable thankfully survives as a charming relic on a quaint Greenwich Village street. 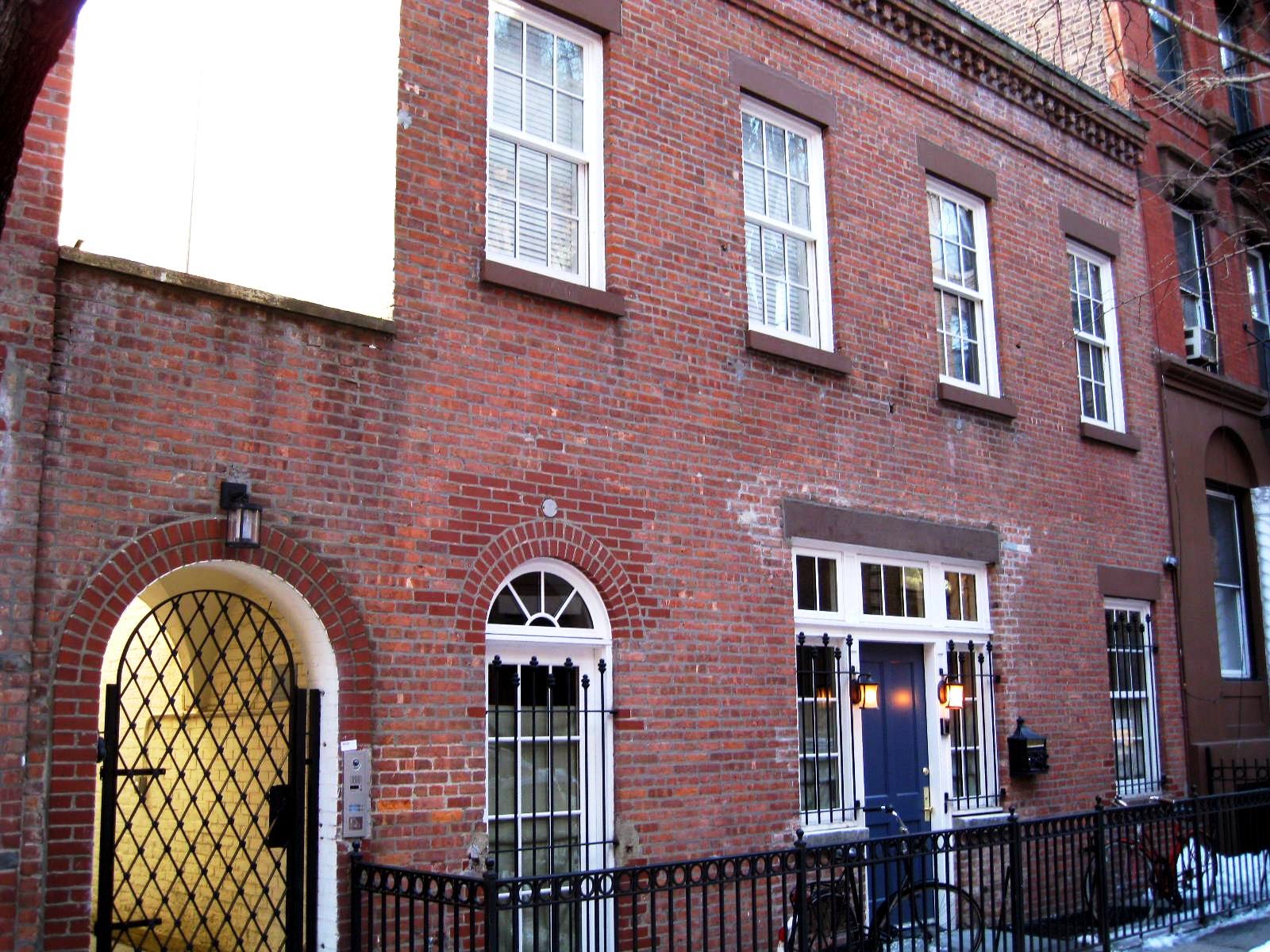 photographs taken by the author
Posted by Tom Miller at 2:58 AM