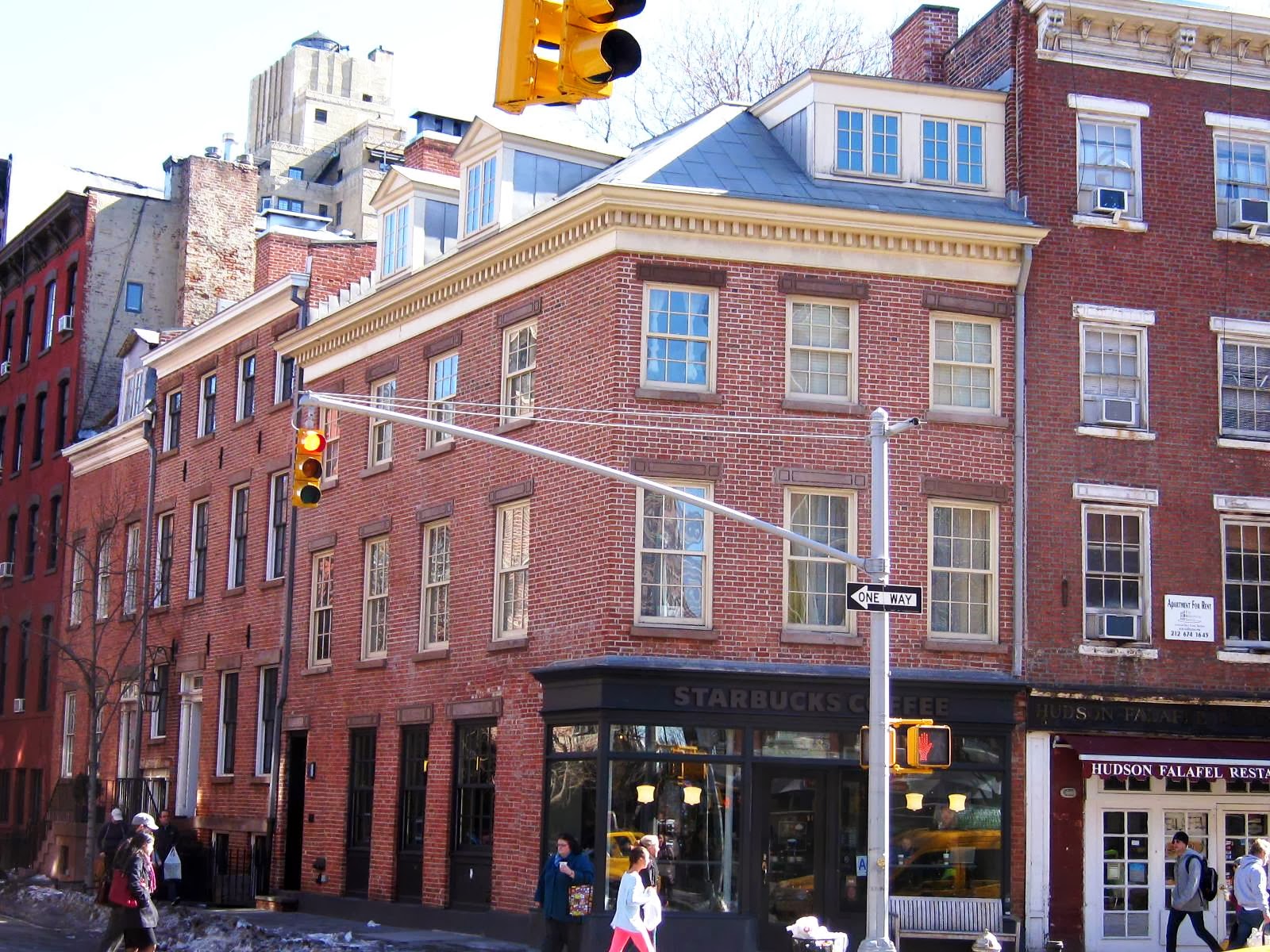 During Greenwich Village’s building boom in the 1820s, Isaac, Jonathan and Charles Hatfield purchased land from Richard Amos in 1825 that wrapped around West 10th and Hudson Streets.  Isaac A. Hatfield was both a carpenter and builder and before the end of 1827 he would complete nine houses on the plots.


Anchoring the corner was No. 518 Hudson Street, a three-story Federal-style structure completed in 1826.   Like the four houses built simultaneously at Nos. 510 through 516 Hudson; No. 518 was clad in Flemish-bond brick.  Handsome paneled lintels graced the windows and dormers perched along the cornice.


Judging from the secondary entrance at No. 252 West 10th Street, the house was always intended to have commercial space on at ground level.   Robert Blanck lived in the building in the early 1840s and it is possible he ran his butcher shop at street level.  In 1844 he moved one block north to No. 646 Hudson Street.


The store space was taken over by Rush Sherrill who ran his grocery store here for years.  His grocery was listed in several city directories; although he lived across the street at No. 513 Hudson.  Sherrill made a modest living from his store; earning $1,428 in 1862 according to the American News Company’s “The Income Record.”  That amount would translate to about $32,000 today.


By the time the Civil War was over Rush Sherrill’s neighborhood grocery store was a saloon run by James Doyle.  In 1872 Trow’s New York City Directory listed Doyle’s “liquor” establishment here, although he saloon-keeper himself lived downtown at No. 21 Mott Street.


Within five years Michael F. Gilmore had taken over the saloon.  He would operate here until 1886, during which time he served as Secretary of the Liquor-dealers’ Protective Union of the Ninth Ward.  Gilmore’s association with the Union, which sought to improve the reputation and operation of saloons, gives some insight to the upstanding type of bar he ran.


At a meeting of the organization on December 14, 1883 the Chairman stressed that “only respectable liquor-dealers would be admitted to membership, and that they did not want any members who employed women in their saloons to attract customers.”


In 1886 the corner that had housed a saloon for more than a decade saw a decided change.  No sooner had Gilmore left No. 518 Hudson Street than Mrs. Gray renovated it as her bakery.  And no sooner did she open her doors than trouble knocked on them.


Mrs. Gray ran her little bakery on her own and when Bakers’ Union No. 1 insisted she play by their rules, she refused.  The Union responded by sending picketers to Hudson Street who jeered customers and offended passing children.


After several days of the protests, The New York Times reported on April 10 “The organization had many more men out distributing circulars against the plucky little woman, and the patronage of the neighboring saloons was correspondingly increased.  The boycotters behaved as rudely to customers of the store as on Thursday, and the solitary policeman stationed in front of the bakery did not arrest any of them when complaint was made to him.”


Seemingly taking the side of Mrs. Gray, the newspaper said “The boys and girls of Public School No. 3, on their way to and from school, had to listen to the profanity of some of the men, and altogether the neighborhood of Mrs. Gray’s little store was made as offensive as possible.”


The “plucky” Mrs. Gray would not be intimidated.  “The lady says she will stick out to the end,” said The Times.


How long Mrs. Gray’s bakery was able to survive is unclear; but by 1897 she had been replaced by a saloon once again.  Owen Trainer would run his saloon into the 20th century while outside, in 1901, Clinton J. Crolius had a newsstand.


By 1913 the barroom was run by John J. and Catherine Hickey.  The pair operated here for several years.  Then Prohibition would put an end to the saloon business at No. 518 Hudson Street—at least for a while.


In the meantime, the upper floors of the building were converted to rented rooms and, later, apartments.  Greenwich Village by now was a haven for artists, musicians, poets and writers and would remain the center of New York’s Bohemian culture throughout the century.


Writer Dorothy Phillips Hartman moved into a five-room apartment in the building in the early 1930s before marrying commercial artist Paul Houser.  Dorothy then moved into her new husband’s home at No. 87 Barrow Street; but she retained her old apartment.


Early in August 1934 the couple had a “disagreement” and Dorothy moved back into the apartment on West 10th Street.  On August 9 neighbors smelled fumes and called the police who broke down Dorothy’s door.  She was found with her head in the oven, a blanket over her head and the gas turned on.  Doctors were unable to resuscitate her.


A writer to the very end, she left a suicide note to Paul which said in part “Maybe you think I am melodramatic.”   In an ultimate act of passive-aggressiveness she wrote “It is very, very awful for me to commit suicide on account of you, but I do not blame you.  You are not deserving of such treatment.  You have always been very, very kind to me.  The insurance policy which you will find will be enough to send you through college.  Lots of love.  Dot.”


Over the succeeding decades Greenwich Village changed in many ways.  The June 28, 1969 violent clash between police and gay patrons of the Stonewall Inn nearby on Christopher Street is universally recognized as the beginning of the Gay Rights Movement.  It was also reflective of the fact that this section of the Village had become the center of the city’s—if not the nation’s—gay culture.


No. 518 Hudson Street became home to One Potato; a restaurant-bar that catered to the gay clientele.   Patrons would later remember that it was famous for its fried chicken and cold draft beer.  By the turn of the 21st century the neighborhood had changed yet again.  The gay population had been decimated by the AIDS epidemic.  In its place upwardly mobile yuppies and financially successful families moved in, renovating and restoring the charming homes and apartments. 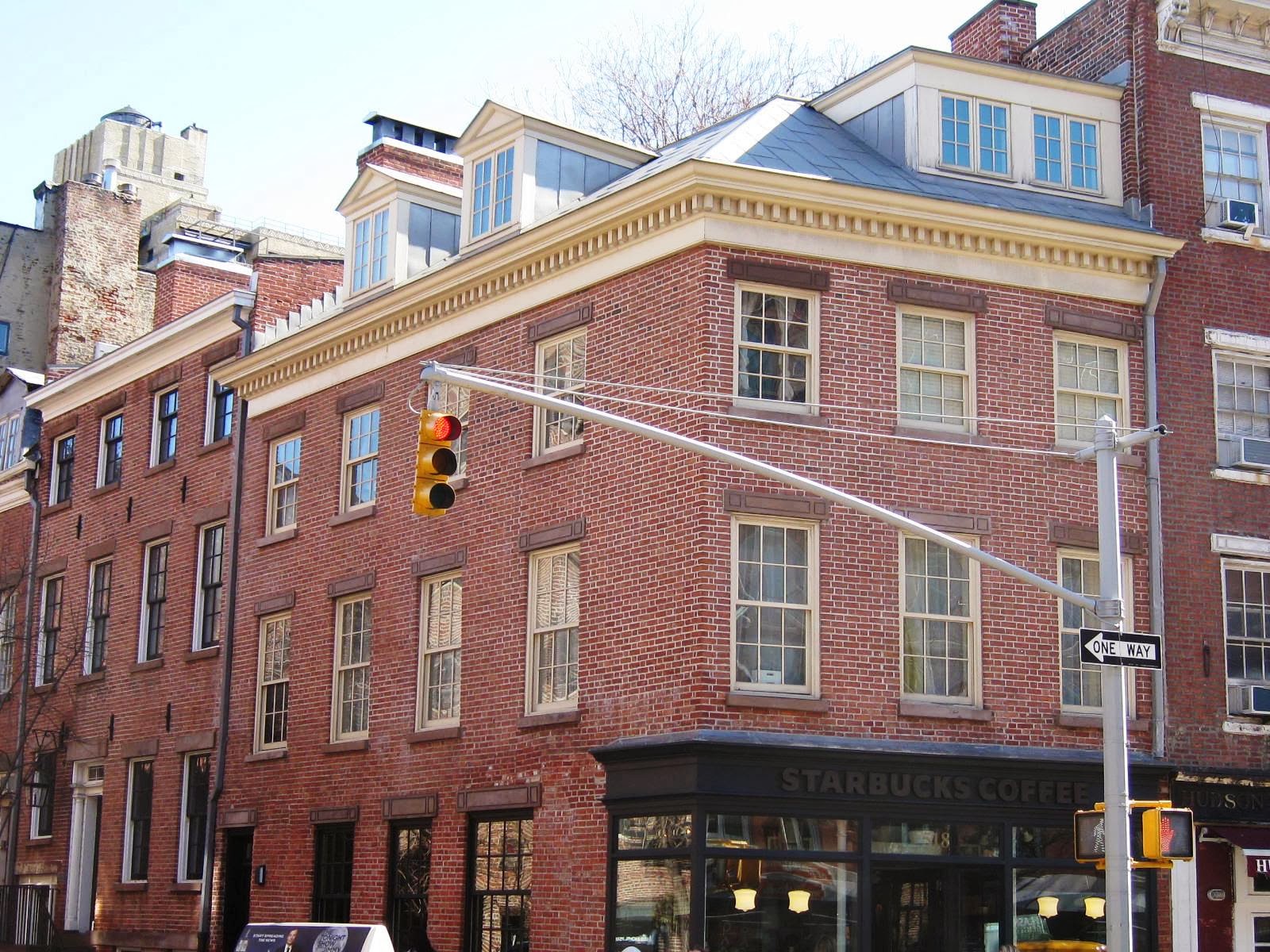 One Potato was supplanted by the Blind Tiger Ale House, which was replaced by the ultimate symbol of gentrification:  a Starbucks.  No. 518 Hudson Street has been dutifully cleaned up, its red brick and brownstone crisp and pristine--a relic of a far-different era in little Greenwich Village.