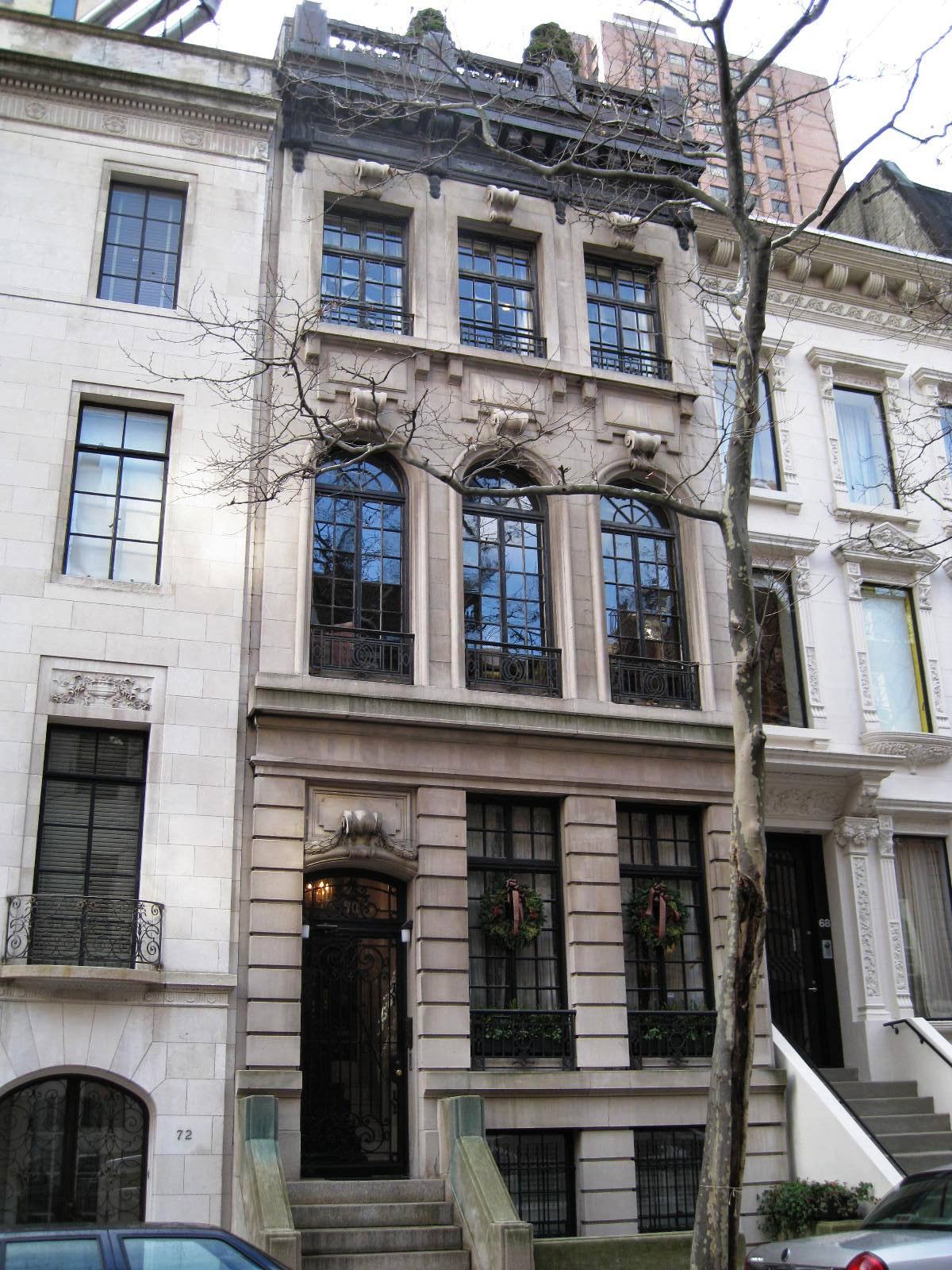 In 1892 Henry Meyer lived in his comfortable brownstone rowhouse at No. 70 East 91st Street.  It was a neighborhood of respectable upper-middle class residences with stone stoops that lined up like soldiers.  But that was all about to change.


In 1899 Andrew Carnegie laid plans for his massive neo-Georgian mansion a block away that would engulf the entire block front on Fifth Avenue from East 90th to 91st Street.  At the time Carnegie’s building site was surprisingly north of the mansion district—by about 20 blocks.  But the steel baron’s magnificent home would quickly draw other millionaires into what would quickly become known as Carnegie Hill.


By the time the Carnegie mansion was completed in 1903, wealthy citizens were already razing the old brownstones of a generation earlier, or extensively remodeling them into au courant residences fit for the newly stylish district.  Fred W. Marks, President of the Markin Realty Company, was highly active in real estate throughout the city.  And he was wealthy.


In December 1904 Marks purchased No. 70 East 91st.  Although the house was just 18 years old, it was stylishly-dated and lacked the upscale flavor now expected in the Carnegie Hill neighborhood.  On December 28 The Sun reported “Mr. Marks will occupy the premises after extensive alterations are made.  The property is a short block from the Carnegie mansion and grounds.”


Calling the renovation “extensive alterations” was understating the project.  Marks hired architect Robert T. Lyons to completely transform the old brownstone into a grand, up-to-date residence.  The scale of the undertaking was such that even the new indoor plumbing was noticed.  Domestic Engineering magazine reported that Milton Schnaier & Co…have contracted for the plumbing in the residence of Fred W. Marks at 70 East 91st Street.”


By the time Lyons was done, there was no hint of the old Italianate rowhouse.  The brownstone façade was stripped away to be replaced by a glimmering white limestone Louis XV front.  Using the narrow 19-foot width to his advantage, Lyons emphasized verticality in the four-story home by introducing nearly floor-to-ceiling arched French windows at the second floor, full-length French windows on the parlor level, and by exaggerating the length of the doorway with a carved panel over the beautifully-carved scrolled and garlanded ornament.  The result was a visually-soaring design that drew the eye of the passerby ever upward.

Dramatic rolling keystones above the upper openings closely mimicked that of the entranceway.  Marks’ renovated home exuded a sort of architectural haughtiness.


Along with four other businessmen, the well-respected Marks was given the $35-a-day post of “inspector of election” in 1907.  The committee’s job was to oversee the election of trustees in the New York Life Insurance Company.  Marks soon discovered that his opinion was worthless because the administration had stacked the deck in its favor.  On January 7 both Marks and Ellis G. Kinkead sent their resignations to Insurance Commissioner Kelsey.


The Sun explained to its readers “Some close observers of the situation in the mutual companies were of the opinion yesterday that the resignation of the two inspectors meant that the international committee had about made up its mind that it was useless to carry on any longer the contest with the administration over the methods of the count.  In other words, they have found that the administration is too powerful for them as the count is now carried on, all their protests on ballots and requests for rulings being ignored.”


Fred W. Marks lived on in the 91st Street house for decades.  By the second half of the 20th century, however, change had come to the neighborhood once again.  Many of the grand mansions had been converted to apartments, including No. 70.  In 1968 there was one apartment in the basement and one on the parlor floor; and two duplexes in the second and third floors.


Among the first residents were architect and urban planner John Joseph Boogaerts, Jr. and his family.  A member of the Century Association, he published maps of the Arabian Peninsula and its major cities in both English and Arabic, and worked for the US General Services Administration.  Boogaerts was an ardent historic preservationist who worked tirelessly for the preservation of the South Street Seaport and the threatened Carnegie Hill neighborhood.


Boogaerts was instrumental in forming the Carnegie Hill Neighbors group in 1970 when developer Peter Sharp announced his intentions of constructing a 32-story luxury residence at 50 East 89th Street.  Area residents had already been staggered by the 1969 invasion of a soaring 40-story residential tower across the street at No. 45 East 89th Street.  Out of proportion and out of character with the low-rise vintage rowhouses, the proposed structure now met with challenge.


Greatly through the efforts of the Carnegie Hill Neighbors, the New York Landmarks Preservation Commission designated that Carnegie Hill Historic District in 1974.  Boogaerts heaved a sigh of relief when he told The New York Times journalist Paul Goldberger, “The war here is over.”


Goldberger explained “it was not so much recognition of existing architecture as a prohibition on new building that the Carnegie Hill residents wanted.  To them, the banal brick high-rise apartment tower represents a threat to the very existence of their neighborhood, and they believe that historic-district status has given them a way to hold back the tide of new building that has threatened to engulf their blocks of brownstones.”


Indeed, the tide of new building was halted.  No. 70 East 90th Street was renovated again in 1983, resulting in a two-family house consisting of a triplex and a duplex apartment.  Meanwhile the handsome façade-- designed by Robert Lyons at a time when the entire Carnegie Hill neighborhood was experiencing a transformation—remains beautifully intact.