By 1881 Central Park had been officially completed for nearly a decade and the blocks to the east of Fifth Avenue were quickly filling with comfortable rowhouses.   That year Theodore Weston began construction of four similar Queen Anne style residences stretching from the southwest corner of Madison Avenue, at No. 30 East 64th Street, to No. 24 closer to the park.


Weston served as his own architect for the upscale speculative homes and their up-to-the-minute design melded brick and brownstone, terra cotta and tile in a profusion of angles and asymmetrical bays and quirky dog-leg stoops.  Six years later he would be called upon for his most distinguished commission.  A founder and trustee of the Metropolitan Museum of Art, he would design its south wing addition in 1888.


The houses were completed in 1882 and No. 26 was purchased by another Museum trustee, William H. Tillinghast and his wife, the former Phoebe Wyckoff.   The highly-successful railroad executive was President and Director of the Cherry Valley, Sharon and Albany Railroad Company; a Director of the Delaware and Hudson Canal Company; and a Director of the Albany and Susquehanna Railroad.


With memberships in exclusive clubs like the Metropolitan and Knickerbocker Clubs, the millionaire hob-knobbed with the city’s wealthiest citizens.  He shared membership in the New York Society Archaeological Institute with names like Cornelius and William K. Vanderbilt, Louis Comfort Tiffany and his father, Henry Villard, Stanford White, A. Ernest Vanderpoel, and Hamilton Twombly.


William and Phoebe had no children and their social lives centered around the Metropolitan Opera, lavish charity events for the Metropolitan Museum, and fashionable summer resorts.  Then, exactly two decades after moving into their new home, Phoebe died here on Wednesday morning, March 9, 1892.


William’s mourning was short lived and a year later, on October 18, 1893 , The New York Times reported “The acquaintances of William H. Tillinghast have heard with great pleasure that he is soon to marry Mrs. Edmund D. Stanton.”  Louise Babcock Stanton had been widowed for 20 years and was well-known among Newport, Southampton and New York society.


The aging newlyweds continued to live on in the Tillinghast house on East 64th Street.  As the years passed, William’s fortune grew as he diversified.  By the turn of the century he had added the Adirondack Railway Company and New York and Canada Railroad Company to his list of Directorships.  By now he also held a seat on the board of the Plaza Bank, was a trustee of the Bank for Savings and the Metropolitan Trust Company, and had co-founded the brokerage firm of Tillinghast & Benedict.


On December 9, 1902 William Tillinghast died in the house at the age of 77.  Louise suffered quietly and when the expected year of mourning passed she threw herself back into the social circuit of summer resorts and winter parties.  In 1913 the 79-year old widow was still going strong.  That year she rented the cottage of James Henry Pierson in Southampton, Long Island for the summer.  It would be the last summer social season for Louise Babcock Stanton Tillinghast, however.
On New Year’s Eve 1913 Louise died in the house on East 64th Street.   Her funeral was held in the parlor on Friday afternoon at 4:30 on January 2.


Dr. Godfrey R. Pisek and his wife leased the Tillinghast house.   He was professor of pediatrics at the New York Post-Graduate Hospital and wrote a textbook on the diseases of children.   A graduate in 1897 of New York University’s Medical School he was President of the Physicians’ Mutual Aid Society, a member of the Academy of Medicine, the County Medical Society and the American Pediatric Society.


The Piseks had three children.  After living in the house for a few years, the doctor purchased it in December 1920.   A month after the papers were signed, on January 20, 1921, Dr. Pisek was waiting for his train on the Third Avenue elevated train station at 18th Street that would take him home.  He would never make it.


The 48-year old physician suddenly suffered a heart attack and before an ambulance from Bellevue Hospital could arrive, he was dead.


The Pisek family moved out of the house and on March 28, 1922 the New-York Tribune announced that Cordelia De Ronde, owner of Mme. Beaudry, Inc., a high-end dressmaker, had purchased the house “for her business and residence.”   The business had, until now, been located at No. 715 Madison Avenue and was named for Cordelia’s mother, Marie Louise Beaudry who moved into the 15-room house with her daughter.


Mme. Beaudry, Inc. fashioned elegant clothing for New York’s socialites from the basement level for years.  Marie Louise Beaudry died in the house on May 20, 1936.  By now the block had greatly changed and No. 26, now half a century old and still little altered, was the last of the Queen Anne row to remain.


But change was looming on the horizon.﻿﻿

In January 1944 public relations executives Edward L. Bernays and his wife, Doris Elsa Fleischman purchased the house with intentions “to occupy it about May for [Bernays’s] offices” according to The New York Times.  Bernays had paid cash for the house and already had commissioned architects Francis Keally and Alfred Rheinstein to renovate it. 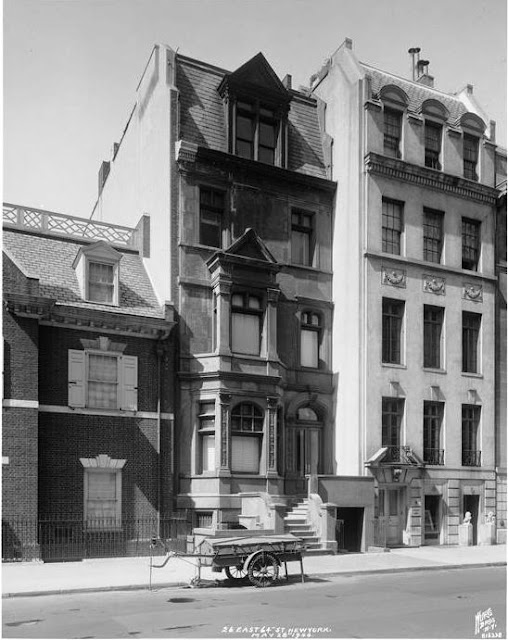 Doris E. Fleischman was a member of the Lucy Stone League, a feminist group that encouraged women not to take their husband’s surname.  And so she kept hers.  She was the first woman in the United States to obtain a passport in her maiden name.


Despite the ambitious architect’s plans little was accomplished other than a few exterior alterations.  A new front entrance was installed and windows replaced.
Eleven years after purchasing the house, The New York Times noted that “Mr. Bernays and his wife, Doris E. Fleischman, plan extensive alterations for their building at 26 East Sixty-fourth Street.  They will convert the upper part for their use as an apartment and will continue to occupy their present quarters there for their professional activities in public relations.”


Eight years later, in 1963, Bernays gave up on renovations and sold the house.  The Times named the buyer as “Bernard Bohle, who plans to renovate the building and occupy it as a beauty salon.”
Bohle did well in the new location and on January 15, 1966 announced he would open a men’s salon in the building.  The Times called it “A salon designed for men with thick wallets and thin hair.”   The new department at street level “will specialize in hair pieces and coloring for men  It will be a separate division of the establishment that already styles the coiffures of many of the city’s fashionable women,” said the newspaper.

Suggesting that Americans were behind the times, the stylist defended the somewhat unconventional concept of a men’s hair salon.  “In Europe it is common to do the hair of the whole family.”  And then he added a financially-logical reason to patronize his shop.  “Many men consider hair pieces and coloring a business investment.  Youth is so important in this country…many men have trouble finding or changing jobs if they look old.”
By the early 1989 the hair salon was gone and a trendy restaurant soon took its place.  New York Magazine, on August 17, 1992, called Frederick’s “the new tearoom-bar-hangout” a “feast for the eyes.”  The magazine suggested that it was patronized by “fashion’s darlings.”
Today, in an amazing act of architectural restoration, some of Edward Nernays’s 1944 alterations have been reversed.  Offices fill the upper stories where the Tillinghasts lived for three decades and a restaurant fills the basement level.   The sole survivor of Theodore Weston’s eye-catching Queen Anne row, it still causes the passerby to pause.