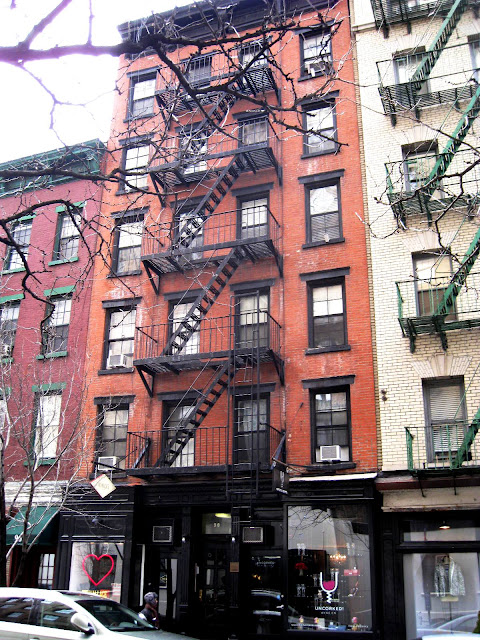 By the 1850s the population of Christopher Street in Greenwich Village was a mixed bag.  In 1854 comfortable one-family homes were built at Nos. 92 and 94; part of a string of identical four-story residences that stretched along Bleecker Street.  The houses were intended for merchant-class families and were planned with stores at street level.

But further towards the riverfront gritty industries like breweries and soap plants were emerging, changing the complexion of that neighborhood.  Italian and Irish immigrants crowded into sections of the Village sharing residential space with the quickly growing black population.  Christopher Street adapted and the once rural thoroughfare was about to see its first multi-family structure.

Samuel Taylor augmented his income as a merchant tailor by dabbling in real estate.  Two years after the handsome structures at Nos. 92 and 94 were constructed, he completed his own project—a tenement house.  Separated from the brick homes by an empty lot that served as a passage to Grove Street, it pretended to be nothing more than it was.

Taylor spent no money on unnecessary embellishment and, unlike the private houses next door with high ceilings and commodious rooms, his tenement was designed to bring in the most money per square foot.  By keeping the ceiling heights relatively low, he was able to produce five floors of apartments instead of four.  The central entrance separated two commercial spaces—affording additional income—with slightly projecting bays.  Because Taylor’s building sat on an average building plot, 25 feet wide, his store spaces were necessarily narrow and long.

Among the first residents in the building was Irish immigrant James Curry.   He attended a funeral at Calvary Cemetery during the first week of March in 1861 and fell from the carriage in which he was riding.  The New York Times reported that he “was totally injured.”  The 39-year old was taken back to Christopher Street where a doctor tended to him.  His injuries were too severe, however, and he died in his apartment here a week later on March 11.

The unmarried Rose Thompson lived in the building in 1879 and as she was walking along Bleecker Street on a Saturday evening in November, she was attacked by the 17-year old Joseph Cullen.  The ruffian “snatched her pocket-book, containing a small sum of money, from her hand, and made off with it,” according to The Times.

Apparently Rose Thompson was not about to allow a hooligan to take her purse.  Cullen was quickly captured by Patrolman Van Wart who heard her screams.  The boy pleaded guilty and found out that the magistrates of the Jefferson Market Police Court had little tolerance for juvenile delinquents.  He was held at $500 bail—more than $10,000 today.

While the tenants in the upper floors attempted, perhaps, to maintain their respectability in less-than-luxurious accommodations in 1884, Philip Graffe ran his saloon at street level.  In the basement a black family lived in what can be assumed were minimal conditions.  In May of that year the family moved out, leaving their white cat behind.

Before long, without food or water, the cat began its loud, plaintive howls.  The Sun reported on June 16 that “The cat made such a racket at night that Graffe determined to annex her and try to soothe her.  He went down the basement steps a week ago Saturday night, called to her, and got his own cat to come out.”

The barkeeper plied the cat with pieces of meat then lured both cats, Pied Piper-like, upstairs to the saloon.  Graffe picked up the abandoned cat and petted her.  Just as he was set to put her down, she turned on him, biting him through the finger.  The cat fled out of the saloon never to be seen again.

The Sun reported that “Graffe’s hand and arm are swollen frightfully, and two doctors are studying him with interest.  They think he will recover.”

Six years after the white cat affair, Ralph Bellino signed a long term lease on the building in 1900.  The new landlord agreed to pay $1,600 a year on the property—a bargain by today’s standards at about $37,000.

Bellino  took on an aging and out-of-date structure that, from its inception, had only the most modest conveniences.  A year after he signed the lease the Department of Health reported “defective plumbing and defective drainage;” a condition that gives some insight to the humble lifestyles of the residents.

Those residents, however, appear to have been on the most part hard-working and upstanding citizens.  Matthew Kissin lived here in 1902 and was no doubt happy for an old schoolmate when she married the wealthy clothing manufacturer Frank Salsberg that year.  In June, Rose Salsberg invited Kissin and several other old school chums to her new home at No. 273 Watkins Street in Brooklyn.  The Evening World reported that “They had just returned from their honeymoon trip, and had not yet had time to engage servants when several friends showed their heartiness by responding immediately upon their arrival to invitations to visit.”

With no servants to do the work, Rose “showed her appreciation by essaying the preparation of a feast for them.”  As Kissin and the other guests were being entertained in the parlor, Rose bent over the gas range in the kitchen.  Her clothing caught fire.  Frank Salsberg and the guests heard a loud shriek, then Rose ran into the parlor.  “She was a living torch,” reported The Evening World.

Samuel Funston had the presence of mind to wrap his coat around the burning woman, and Kissin threw her to the floor and extinguished the flames by rolling her on the carpet.  The efforts of the two men were in vain, however.  Rose Salsberg, married only two weeks, died in Brooklyn’s St. Mary’s Hospital “from terrible burns she suffered while preparing her first feast for friends who had called to celebrate the return of the happy bride and bridegroom.”

In 1906 John Sewell was the black sheep of his well-known Long Island family.  The New York Times said “Sewell did little work, being for the most part supported by wealthy relatives.”  The deadbeat relative had his mail and money from his family delivered to a saloon.  Among his friends was Jacob Duhler who lived at No. 98 Christopher Street.  On August 26, 1906 Duhler ran into the slightly intoxicated Sewell on the street and invited him up for dinner.  It would be Sewell’s last meal.

The drunk man attempted to swallow a piece of meat, but choked.  Before the ambulance arrived Sewell was dead in Duhler’s apartment.

Three months after the unfortunate incident M. Rosenblum purchased the building with promises to “make extensive alterations.”  The alterations did not affect the outward appearance of the 52-year old building.

In 1911 New York’s millionaires were building marble and limestone palaces on Fifth and Madison Avenues, far removed from Greenwich Village.  In the meantime, women like the widowed May Levantine who lived at No. 98 Christopher Street were struggling to make a living.  May worked as a sewer in the Triangle Waist Company.  When she left home on Saturday morning, March 25, she had no inkling that she would nearly not return.

In what has become perhaps the most well-known of American industrial tragedies, the Asch Building where May worked caught fire.  Panicked workers, locked in or unable to escape down too-few fire stairs and fire escapes, either burned or plummeted ten stories to their deaths.

May later recalled “I was in the dressing room on the ninth floor when I heard the girls screaming.  Margaret Schwartz and Miss Alterman also were there.  I thought the elevator had fallen and ran out to see it, but could not because so many girls were about the door.  I then went to the Washington Place door and found the key in the lock.  I turned it and went out and saw smoke coming up the stairs.  I then went and looked over the railing and saw a big flame coming up.  I ran back into the room and shut the door behind me.”

May Levantine saved herself by sliding nine stories down the elevator cable.  Her intrepidness and quick thinking saved her life, although she said “my hands were very badly cut.”

Immigrant families continued to find home at No. 98 Christopher Street into the first decades of the new century.  Peter Cassamassi was among them and his old-world ways did not put a great deal of importance on schooling.  On June 1, 1923 The New York Times reported that he “was brought before the court for the ninth time” for allowing his children “to become habitual truants from school.”

The judge gave Cassamassi his choice of fifteen days in the Tombs or a $25 fine.  The disgruntled father paid the fine.

In 1942 No. 98 Christopher street was given a renovation resulting in four apartments per floor (three on the second).  As the 20th century progressed, Christopher Street became the epicenter of the gay community and an icon for the Gay Rights Movement.  The 1854 tenement house, however, resisted change.  Shops and cafes came and went but Samuel Taylor’s pre-Civil War building remained essentially the same. 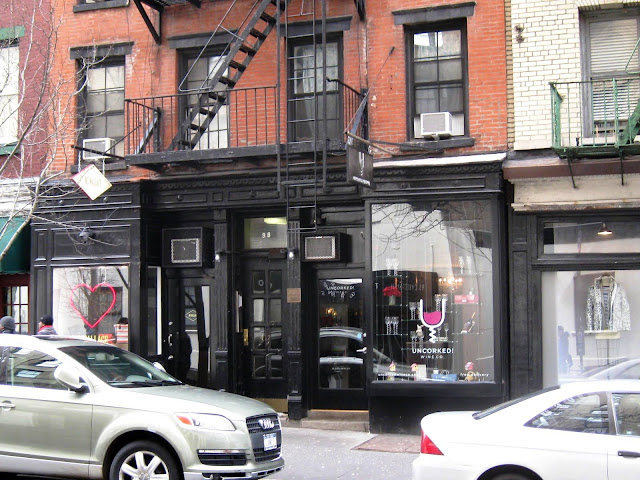 Today residents in No. 98 Christopher Street enjoy luxuries like modern appliances impossible to conceive by their immigrant predecessors.   Monthly apartment rents are higher than the $1600 yearly lease Ralph Bellino paid for the entire building back in 1900.  Yet the structure, universally considered to be the first apartment building in Greenwich Village, maintains its unassuming 1854 appearance.

photographs taken by the author
Posted by Tom Miller at 1:56 AM