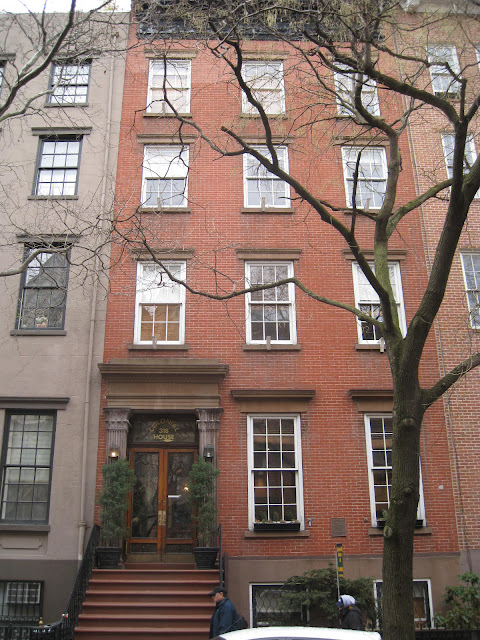 When Clement Clarke Moore began plotting his family estate into building lots as the city inched nearer he was concerned about the quality of residences to come.  In order to ensure a high-class neighborhood, he wrote restrictive covenants into the deeds of the first plots on West 22nd Street between 8th and 9th Avenues.  Each house was required to be 37 feet wide--in other words, a mansion.

But by the time Alfred Martin built his home at No. 318 West 22nd Street in 1848, the restrictions had been dropped.  Martin’s completed residence would be the expected 25 feet in width.  Designed in the highly-popular Greek Revival style, the red brick house rose four stories over a deep brownstone basement level.  The restrained brownstone sills and lintels, the wide stone stoop with its attractive Greek Revival railings and the heavy entablature over the doorway were indicative of the style.

But Martin’s architect stepped out of the box when he designed the entranceway.  Rather than the flat brownstone pilasters with lackluster capitals normally found in the Greek Revival homes rising throughout the city, he hinted at the Egyptian Revival style.  The substyle was rarely used in domestic architecture in New York; although it had made itself highly visible in the monumental Croton Reservoir completed six years earlier and in the 1838 prison downtown, known as The Tombs.

Nevertheless, Martin’s doorway enframement was embellished with deeply-fluted pilasters the capitals of which burst forth with papyrus and acanthus leaves.  The odd blending of the Greek and Egyptian resulted in a highly unique and eye-catching entrance unlike any in the neighborhood.

In 1861 the attention of New Yorkers was focused on the South as the War of Rebellion erupted.  Pharmacist Washington M. Thurman was living in the house at No. 318 with his wife and daughter, Imogene.

Thurman had graduated from the College of Pharmacy of the City of New York in 1831 and was, by now, well established and considerably well-to-do.  He augmented his income by buying and selling New York real estate.

For three days from July 13 to July 16 in 1863 the city was overwhelmed by what became known as the Draft Riots.  It would be the largest civil insurrection in the country’s history.  Washington M. Thurman was unfortunate enough to get caught up in the melee.

The pharmacist was set upon by a mob, just one of many respectable citizens attacked on the street.  In the assault Thurman lost his expensive watch and other valuable personal items which amounted to $137.25—a little over $3,000 today.

A block to the north, at the corner of 8th Avenue and 23rd Street, sat the white marble Grand Opera House owned by Jay Gould and Jim Fisk.   Fisk and his business partner Edward S. Stokes shared more than dealings and profits—they shared a girlfriend.  The actress Josie Mansfield had caught the eye of both men and on January 6, 1872 Stokes eliminated his competition by shooting a lead bullet into the stomach of Fisk in his office in the Opera House.

A sensational murder trial ensued with Washington M. Thurman as a jury member.  After attempts for dismissal were rejected and a long, wearying trial, the jury found Stokes guilty of premeditated and malicious murder.

By the time Imogene married David B. Ingersoll in the house on February 8, 1882, Washington Thurman had died.

The house was soon purchased by Louis Frank who owned a wholesale butcher store at No. 184 8th Avenue.  Frank and his wife, the former Ida Ball, reared two children in the house—Robert and Martha.

Frank had already run his meat market since the 1870s and was well established and well-known in the Chelsea area.  Just after the turn of the century, the Franks modernized the house by replacing the early Victorian entrance doors with up-to-date golden oak double doors with pressed wooden panels below two long glass windows.  The original cornice was replaced with one of pressed metal at the same time.

The financially-successful Frank was active in the Allied Food Merchants’ Association.   In 1915 the group hosted a testimonial dinner for Alderman Joseph Schloss “in recognition of his service in and out of public office for the cause of good government,” according to The National Provisioner.   Actually, the true reason behind the affair was a little closer to home for the meat dealers.  “This dinner is of interest because of the work that Mr. Schloss has recently done in behalf of the food dealers of New York City in combating the free public market fad,” said the publication.  Louis Frank served as treasurer for the event.

By 1932 the West 22nd Street neighborhood had changed greatly in the near century when the house at No. 318 was built.  Many of the old homes were now boarding houses and several had been razed for apartment buildings.  But Louis and Ida Frank lived on in their home.

That year, however, Louis developed pneumonia.  The 74-year old retired butcher was unable to fully recover and on January 7, 1933 he died in his bedroom here.  Louis Frank’s death was the end of the line for No. 318 as a private dwelling.

The following year the house was converted by architect Abraham Grossman to furnished rooms and kitchenettes.   Nearly four decades later the house would play a significant role in a social and medical cataclysm.

Mel Cheren, record executive and co-founder of the Paradise Garage, a massive gay disco, owned No. 318 in the 1970s and was in the midst of converting it into apartments.  But the AIDS epidemic hit Manhattan’s gay population with brutal force.  Affected men, unable to hold their jobs were also evicted from their apartments and were unable to find housing.  Cheren would later explain to The New York Times “No one would rent to them.”

So Cheren abruptly switched tracks and offered the house to the Gay Men’s Health Crisis, a fledgling organization with no physical headquarters.  Then, when the organization moved to new facilities in 1984, he converted the house into the Colonial House Inn, a guesthouse aimed at gay clientele.

Mel Cheren died on December 7, 2007.  Ironically he was the victim of pneumonia as a complication of AIDS, the disease he so fervently rallied against.

Today Alfred Martin’s 1848 beauty at No. 318 West 22nd Street continues as the Colonial House Inn.  Although the interiors have been lost, the façade is remarkably preserved and cared for.

photographs taken by the author
Posted by Tom Miller at 2:33 AM