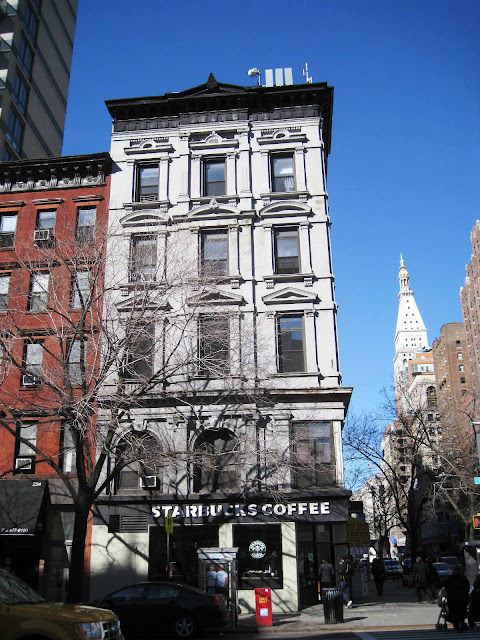 Richard Kelly was only 14 years old when he moved to New York City.   The boy entered the hay and feed business, a humble start to what would be an illustrious career.   In 1854 he was one of the incorporators of the Bull’s Head Bank; then, exactly one decade later in April 1864, the Fifth National Bank was organized and he was made its President.

The bank directors took a gamble.  They established the new bank on Third Avenue between 26th and 27th Streets, far north of the any other East Side bank.  Within ten years the bank’s success demanded a new structure and architect James E. Ware was called in to design it.

The choice of architect was, perhaps, surprising.  Ware was, at the time, busy producing tenement buildings and warehouses.   While other architects studied at the esteemed Ecole des Beaux-Arts, Ware was trained in the City College of New York.  While his projects to date could be considered utilitarian; he nevertheless regarded them seriously and developed innovative and forward-thinking improvements.

He devised the “dumbbell plan” for tenement houses that provided increased sunlight and ventilation, and worked on improving the fire-resistant construction of warehouses.

His design for the Fifth National Bank building, however, would be anything but utilitarian.   Completed in 1874, it sat at the southwest corner of Third Avenue and East 23rd Street.   Ware drew mainly on the Italian Renaissance for the design; but he splashed it with touches of neo-Grec; reflected, for instance, in the window treatments of the fifth floor.    An eye-catching, projecting cornice capped what the New-York Tribune deemed a “handsome banking building.” 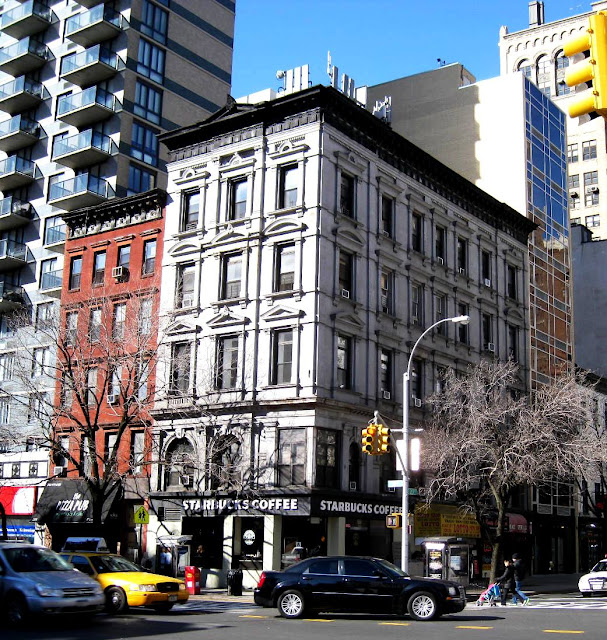 The structure was designed with a dual purpose.   The bank and offices were housed on the ground level and above were French Flats—apartments—accessed through a separate entrance at No. 162 East 23rd Street.  The arrangement provided the bank additional income.

Banks of the 19th century were fertile territory for thieves and crooks and the Fifth National Bank was no exception.  On March 3, 1882 Alexander Climm opened an account here using the name L. Climm of No. 125 Mercer Street.  Ten days later he deposited a check for $440, payable to L. Climm and signed by Gustavus Young.

Climm returned to the bank the following day and withdrew $448.  Investigation discovered the Young was a clerk for Climm and the two somehow thought that drawing money from worthless checks would prove profitable.  Climm’s actual balance at the time was $1.93.  Both of the men were found guilty of conspiracy to defraud the bank.

None of the criminals who crossed the threshold of the Fifth National Bank was more fascinating than Henry T. Hardy.  The 24-year old caught the public’s interest by his bold daylight bank robberies and on September 20, 1888 he hit the Fifth National at 10:00 in the morning.

Hardy, whom The Evening World described as “5 feet 10 inches in height, very slim, and with a smooth, pleasant face, rather cadaverous,” loitered around the bank corner for several days until he was ready to make his move.   While a teller was distracted, Hardy jumped up on the counter, reached over the glass partition and grabbed three packages of bills, each containing $1,000.  He dropped one of the packages as he fled onto the street.

The daring bandit headed downtown to the Commercial Bank at No. 78 Wall Street where he repeated the scene, grabbing $8,700 in cash this time.  A bank clerk chased him, joined by Policeman Nesbit and a gun battle ensued at Maiden Lane and South Street.

When Hardy dashed into Hastings’s Saloon, the saloon-keeper tripped the bank robber and Patrolmen Nesbit and Bemis “fell upon and secured him.”   Arresting Henry T. Hardy would be easier, law enforcement would find, than holding on to him.

Hardy, whose real name was Charles F. O’Connell, was sent to Dannemora Prison and he straight away escaped.  He turned up in Frankfort-on-the-Main and returned to his former ways.  He was arrested for stealing about $55,000—about $1 million today—in 1896 and, after a 13-year prison term in Germany, arrived in Plattsburg, New York, on January 15, 1906 to finish his sentence for the Fifth National robbery.

In the meantime, the apartments above the bank were filled with respectable working class families.  In 1886 William Easton lived here.  A horse and cattle auctioneer, he caused some concern when he arrived back in New York on the steamer Brittanica October of that year.  “While on the way to his home…he was taken with a fit, and it was some time before the physicians could afford him any relief.  He was much better last evening,”  reported The New York Times.

47-year old Henry L. Ramsey also lived in the building with his wife and two sons at the time.  Born in London, he was in charge of the wholesale music department in the Charles H. Ditson store.

The clerks of the Fifth National Bank joined the other banks of the city in athletic pursuits.  Among the several sports groups was the Bank Clerks’ Bowling League.  The bank was embarrassingly defeated on November 11, 1893.  “On account of the absence of two of the members of the Fifth National Bank team, the game with the Emigrants’ Savings Bank team was practically a forfeit,” said The Times.

In April 1897 Richard Kelly died at the age of 86.  Not only had he headed the bank for 33 years, he was a Justice of the Court of Special Sessions for 12 years, had served as a volunteer fireman, and was President of the Dry Dock, East Broadway and Battery Railway Company.  At his death, and for several more years, the Fifth National was still the only East Side bank above Grand Street.

Around the time of the First World War the flats on the upper floors were converted to business purposes.  For years the Miller Business School would operate from here.   The school offered courses for aspiring accounting clerks and secretaries.  An advertisement in the New-York Tribune in 1919 touted the opportunities the end of the war presented.

By 1920 the Fifth National Bank was gone and on February 12 the first Polish-American State bank in New York opened in the building.   The bank would not be here long, however, and in 1923 the banking hall was converted to retail space with offices above.

The upper floors became popular with labor groups and on the night of May 8, 1942 First Lady Eleanor Roosevelt addressed an audience of 500 at a “win-the-war rally” in the 12th Assembly District American Labor Party Club here.  Although the war necessitated American sacrifices—men’s shirt tails were shortened by one inch to conserve fabric and rayon replaced wool in rugs—she warned against shoddy products.

“Mrs. Roosevelt said these changes must be accepted as part of the temporary worsening of the standard of living that Americans must endure to win the war,” reported The Times.  “She said, however, that consumers should protect themselves against unnecessary cheapening of quality, or any cheapening aimed at getting around the price controls.”

Not all the labor organizations attracted good press and First Ladies.    New York City unions at mid-century were rife with corruption and organized crime.   In 1953 one of the building’s tenants was harassed by a union with headquarters elsewhere.   William G. Engler ran an embroidery shop, the Will-Nor Craft Corporation.  He was approached by two members of the United Automobile Workers, A. F. L. who demanded $500 “on threat of ‘forcing a stiff union contract’ on Mr. Engler, or arranging for his plant to be struck,” according to The New York Times.

Engler thought quickly and told the thugs he did not have the money on hand, but if they would return at 10:00 the following morning, he would give them $150 with another $150 to follow in a week.  When Henry Gasster, president of the union, and George M. Cohen returned the next morning to collect their extortion money, two employees in the store went about their business, apparently disinterested.

Local 284, Independent Association of Processing, Maintenance and Distribution Workers of America had its offices in the building in 1962.  The union had a membership of 1,500 workers, mostly car washers.  On March 9 of that year the special Federal rackets grand jury issued its first indictment, charging the union’s 52-year old secretary-treasurer Arthur Santa Maria with embezzlement.

The Times noted that Santa Maria “was said to be an associate of John Dioguardi, a labor racketeer known as Johnny Dio.” 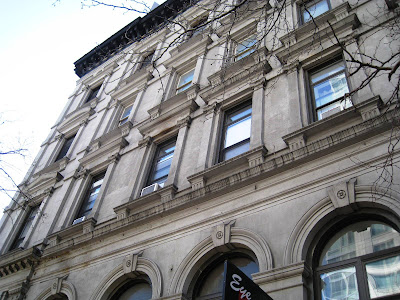 In 1979 the offices that had for decades been headquarters of various trade unions were converted to apartments, as they were originally intended; just three per floor.   Today the banking hall where Richard Kelly opened his bank far north of any other East Side institution houses a Starbuck’s Coffee shop.  Above street level much of James Ware’s 1874 design survives; a handsome example of mixed-use buildings erected in the first decade after the Civil War.

photographs taken by the author
Posted by Tom Miller at 2:37 AM