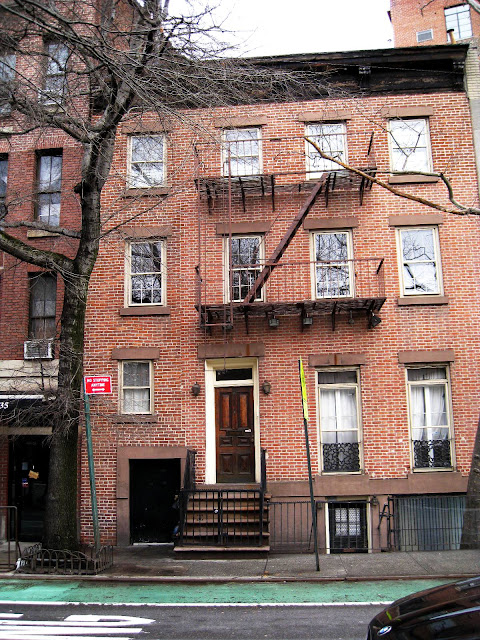 In 1819 the Village of Greenwich was still a sleepy hamlet far north of New York City.   Christopher Street, the oldest street in the Village, ran along the southern boundary of the former country estate of Sir Peter Warren.  The street received its name when the estate was inherited by Charles Christopher Amos, who lent his names to three nearby streets.

At the foot of Christopher Street stood the Newgate State Prison complex, designed by Joseph-Francois Mangin.  That year William Austen, a cartman (today’s equivalent of a truck driver), had a modest brick home built just to the east of the prison at No. 133.

The 27-foot wide house was two stories tall with a dormered attic.  The red bricks were laid in Flemish bond, contrasted with simple brownstone lintels and sills.  The narrow entrance had none of the elaborate Federal details found in more upscale homes—elegant columns and delicate fanlights.  Instead a simple wooden frame surrounded a six-paneled door.  A narrow horse-walk allowed access to the rear lot.

Reportedly Revolutionary War hero Richard Amos lived in the Austen house in the 1830s, dying here in 1837.  By now the neighborhood had drastically changed.  New piers had been constructed in 1828 at the foot of Christopher Street and a year later the Newgate Prison was abandoned.  While elegant middle- and upper-class residences filled the Greenwich Village blocks to the east; the neighborhood nearer the river became industrial.

In 1845 Nash, Beadleston & Co. opened a brewery in part of the old prison and a coal yard was established a block away on Charles Street.  By the 1850s there were gritty businesses like a soap plant, iron works and lime shed in the area.

The house at No. 133 became a boarding house in the years just before the Civil War.  An additional story was added, and the building was extended to the west, engulfing the former horse-walk.

A variety of tenants lived here, like Stephen M. Anderson in 1861, an “engrossing clerk.”   In 1867 the boarding house was run by P. McGeihan and his wife.  Lucretia Foss lived in the house with her husband, a foreman of a large printing company.  In October of that year Mrs. Foss became entangled in a humiliating and confusing incident.


When Mrs. McGeihan traveled across the river to the National Bank of Jersey City, Mrs. Foss accompanied her.  Mrs. McGeihan cashed a $200 check and the pair went on about their business.

A month Later Lucretia Foss found herself arrested and standing before a judge, accused of forgery.  The New York Times called Mrs. Foss “a very handsome and lady-like woman” and said she “stated further that she is the victim of some strange mistake, as she was never in the Second National Bank of Jersey City but once in her life, and on that occasion she was in company with Mrs.McGeihan.”

The newspaper said “Mrs. Foss left the impression on all who heard her of her entire innocence.”

A day later there was a trial.  The clerk of the bank insisted that Mrs. Foss had received the money and the check was forged.  Mrs. McGeihan said that she knew that Mrs. Foss had “written a letter at her husband’s desk, and also admitted that the desk could be approached by any of the inmates of the house,” said The Times.

While the proceedings went on, Lucretia Foss’s sisters and husband sat in court “full of indignant sorrow at the painful strait in which Mrs. Foss was placed, and one of the sisters became so hysterical that she was carried from the Court-room.”

The trial dragged on and The Times reported that “The accused was held to await the action of the Governor.”  It added “The case is a remarkable one.”

By the turn of the century the boarding house was run by Annie Carroll.  A black woman, she offered rooms to black lodgers who worked in the stables and factories nearby.   One of her boarders in 1908 was Parker Howard, a stable hand at Pierce's barns on Perry Street.

Howard worked as a stable cleaner and groom, along with his brother Joe and his cousin Clark Howard.  Employees at the barns said he "did his work well, but was given to queer behavior" and his brother said that since a bicycle accident that injured his skull around 1903 "he had been flighty," as reported in The Evening World.

It was not his queer or flighty behavior that got Howard into trouble, however.  A few years earlier he had been employed as as stable hand by the wealthy president of the Manhattan Knitting Mills, Henry Corwith whose mansion was at No. 293 Riverside Drive.  When Corwith believed that the Howard was "annoying" his pretty 19-year old daughter, Louise, he fired him.

Later Corwith's private secretary, Frederick H. Brown, filed a complaint in the Jefferson Market Court that Howard "had been acting strangely."  The stable hand was arrested.

Upon his release Brown secured the former employee a job in Philadelphia in order to keep him far away from New York and Louise Corwith.  But Howard returned to the city where he obtained work in the Pierce barns with his two relatives.

The black man was arrested on June 2, 1908, "and then sent to have his sanity examined," said The Evening World.  The newspaper reported "While Howard does not appear violent or insane, there is no question in the minds of those who have him under observation that he is unhinged, and that he was probably driven made by crazy infatuation."

Annie Carroll came to his defense after visiting him in jail.  "Howard Parker told me that he never wrote but one letter to Mr. Corwith after they let him out of jail, and that was just before he came up here from Philadelphia.  He said he didn't make any threats.  But he did mention the young lady's name in his letter to her father.  He just asked Mr. Corwith for a job, so he says."

But, Annie had to admit, he did keep a photograph of Louise.  "He had a picture of a little white girl in his room," she told a reporter from The Evening World, "and he told me that it was a picture of the daughter of the man he used to work for and that he kept it because she had been kind to him."

That was reason enough for his "being watched closely by attendants and physicians to-day," according to the World.

By the approach of the Great Depression Greenwich Village was the bohemian haunt of artists, musicians and poets.  Charlie's Oyster and Chop House was in the basement level of the old house at No. 133.  The upper floors had by now been converted to small apartments and here, in February 1935, 3-year old Aldine Meacham and her 2-year old sister Jean set fire to the family apartment while playing with their electric grill.

The family moved out of the fire-damaged rooms into the four-story apartment house at No. 86 Perry Street.    Ironically, that building caught fire two months later on April 19.  Fireman Michael Donohue saw little Aldine in the third floor window and carried her down a ladder.  The little girl screamed that her mother was still in the apartment.  Donahue reentered the window, tripping over the girl's mother who had been overcome by smoke.  Both victims were treated for burns on their hands, head and face but recovered.

The second half of the 20th century saw a greatly-changed Christopher Street.  Now the epicenter of New York City's gay culture, it experienced a rebirth of a sort.  In 1961 the house at No. 133 was reconverted into a single-family house, with a store in the basement.

Today the neighborhood continues its transformation.  The gay population, decimated by AIDS in the last decades of the century, re-established itself in the Chelsea neighborhood to the north.  The last house on the block, the venerable residence hangs on with resilience, having seen 200 years of history and change.