The Breevorts, among of the oldest of the Dutch families in Manhattan, owned large tracts of land.  As development inched northward, the powerful and wealthy Henry Breevort shrewdly sold or improved plots.  In 1828 George P. Rogers constructed his refined country house on the northern edge of what had been until two years earlier a potters’ field, just south of Brevoort land.  The exclusive Washington Square neighborhood was begun.

By the 1840s the Square was among the most fashionable addresses in the city and already mansions had started spilling up the unpaved Fifth Avenue.  In 1848 Breevort started construction on four houses in the newly-popular Gothic Revival style.  Stretching from No. 10 at the northwest corner of 8th Street to No. 16, they were clad in brownstone and featured medieval touches such as crenelated rooflines, incised panels with quatrefoil designs and square-headed eyebrows over the windows.
The corner house was purchased by wealthy iron merchant Thomas Egleston while still under construction.  Upon its completion in 1849, he and his wife moved in with their 17-year old son, Thomas, Jr.   Egleston came from a prominent New England family, his ancestors having been among the first settlers of Dorchester, Massachusetts in 1635.

The nature and financial scope of his business was evident in 1860 when he sued Francis Spies for materials Egleston furnished for the building of the Bark Agnes.  Spies had failed to pay Egleston for $950 in iron parts—around $30,000 today.

In 1854 young Thomas graduated from Yale College and, after a few months working as an assistant in the laboratory of Benjamin Silliman, Jr., he sailed to Paris where he studied metallurgy at the Jardin des Plantes and, later, at the Ecole des Mines.   Upon his graduation in 1860 he returned to New York and the house at No. 10 Fifth Avenue.

The younger Egleston realized upon his return that America had no scientific school of mineralogy.  Popular Science recalled in 1899 that “Mr. Egleston, as he was then known, saw and felt this lack, and planned to supply it.”  In March 1863 he published his Plan for a School of Mines in New York, embodying a three-year course for the degree of engineer of mines.  He approached Peter Cooper who decided that the school would be too specific for the general, comprehensive educational plan of Cooper Union.

Undaunted, he finally convinced the trustees of Columbia to establish his school.  Egleston was given laboratory accommodations for a dozen students—sufficient for the expected number who would apply for admission the first year.  On November 16, 1864 The New York Times reported on the opening of the Columbia College School of Mines.  “Several of these schools are in successful operation in Europe,” it said, “but this is believed to be the first and only institution of the kind in the United States.”

Twenty-four new students showed up on the first day of class—exactly double the number for school could comfortably accommodate.  Basements and floors of other buildings were quickly taken over and by the second year accommodations were made for 72 students; but 89 showed up.

The trustees of Columbia College realized that Dr. Eglestone’s innovative School of Mining required its own building and $70,000 was authorized for the renovation of a factory building on Fourth Avenue and 49th Street.

His academic and financial success secure, Thomas Egleston, Jr. looked towards his private life.  On May 2, 1865 he married Augusta McVickar in the fashionable Trinity Chapel.  The newlyweds moved into the Engleston house on Fifth Avenue.  Theirs would be a life of unmatched devotion.

Egleston’s reputation and achievements quickly mounted.  He was one of the founders of the American Institute of Mining Engineers, a founder of the American Metrological Society, and of the Societies of Mechanical Engineers, and a founder of the Electrical Engineers.  In 1866 he was involved with the Agricultural and Geological Survey of the Union Pacific Railroad; in 1868 appointed a United States Commissioner to examine the fortifications of the coast; was a juror for the International Exposition at Vienna in 1873; and received the rank of Chevalier of the Legion of Honor and rank of “Officier” from the Government of France.

But the professor’s interests and energies were not focused entirely on mines and minerals.  When James Audobon’s gravesite, originally far north of the city between 153rd and 155th Streets along Amsterdam Avenue, was threatened by the extension of 153rd Street, Egleston moved to find another gravesite and erect a monument.  Through his endeavors, Audubon’s body was reverently moved and a striking monument erected to him.

As his Fifth Avenue neighbors abandoned the area to move further uptown, Thomas Egleston stood firm.  When he realized that the Tweed Administration was quietly positioning itself to eliminate the venerable Washington Square Park just two blocks south of his mansion; Egleston took action.

The Tweed regime sought to nudge the wealthy New York families out of their Washington Square mansions.  Popular Science said “Washington Square had been dug over and torn up, under the pretext of remodeling and ‘improvement,’ and the unsightly mounds and piles of earth were left for many months, not only to offend the eye but to generate malaria…The south side of the square had been ‘worked’ already, in the first attempt, and had largely lost its population of old residents; but the north side was still occupied by a select class of old New-Yorkers…

“Then began to be hinted some schemes for which all this was preparatory.  A great militia armory was to be erected on the western end, and other projects vaguely loomed up, involving the ruin of the park as such.”

Egleston recruited John Jay in organizing a small group to fight the destruction of the square, rallying politicians in Albany.  Their efforts were successful.  Popular Science, in 1899 said “That Washington Square remains to-day, an oasis of beauty in the desert of brick and stone, and a breathing place in that densely built portion of the great city, is due principally to the watchfulness and energy of Professor Egleston.”

Almost as a sign of defiance; while other wealthy New Yorkers moved northward, Thomas and Augusta Egleston moved south, leaving the house at No. 10 Fifth Avenue around 1881 for No. 35 West Washington Square.

Egleston traveled extensively throughout the world.  His journeys gave him the opportunity to collect gemstones which he had set into jewelry for his beloved wife, Augusta.  Her collection of jewels was significant.  When she died in 1895 he had the jewelry disassembled.   He designed a golden chalice which he presented to Trinity Church in memory of Augusta.  It was studded with 180 gemstones, collected by him and worn by her.

Thomas Egleston, Jr. died in 1900, having left an ineradicable mark on the history of New York and the Washington Square neighborhood. 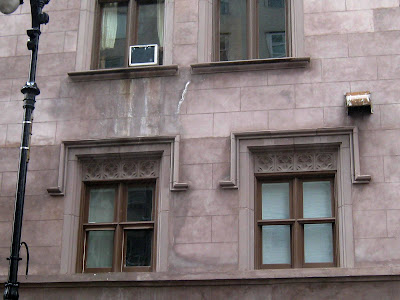 In the meantime, the Fifth Avenue corner where he spent most of his life had changed.  The high stoop and parlor floor entrance were removed sometime after the turn of the century.  In 1917 a school had taken over the upper floors and on street level The Diamond Disc Shop sold the new Edison phonographs.  An advertisement that year touted “Through [Edison’s] wonderful phonograph, he has brought to you genuine music, music that is free from all mechanical blemishments, music that  is alive with the fleeting breath of reality, music that is true to the original tone from which it was re-created—genuine music.”

Two years later the upper floors were converted to bachelor apartments.  The Department of Buildings warned “Cooking in more than two of the apartments will render this building liable to immediate vacation by the Tenement House Dept.”

Throughout the 20th century Henry Breevort’s row of Gothic Revival houses suffered indignation.  Nos. 14 and 16 were stripped of their architectural detailing and converted to a single five-story apartment building.  No. 12 was demolished to make way for a tall Beaux-Arts inspired apartment house.  Thomas Egleston’s family home at No. 10, however, survived--if somewhat battered.

In 1930 shops were added at street level; but the alterations were unexpectedly sensitive to the original architecture.  In a valiant attempt to meld the modern and vintage architecture, a Gothic-style doorway to the upper floors was installed, and an applied, projecting bandcourse imitated the label moldings above.  It is an overall laudable nod to the historic fabric of the building.

A metal sheath atop the cornice sympathetically matches the original crenelation underneath.  The quatrefoil panels at the second (originally the first) story windows amazingly survive as do the wonderful label moldings, or square-headed eyebrows.

A 1962 conversion resulted in three and four apartments per floor above the now-commercial street level.  Along 8th Street the sidewalk level has been obliterated for modern store windows; and the Fifth Avenue base has gained a pseudo-rustication.  But overall the renovations fall in line with the 1930s updating--carefully avoiding the ruination of one of the last reminders of the mansion days of this area of Fifth Avenue.

non-historic photographs taken by the author
Posted by Tom Miller at 5:06 AM