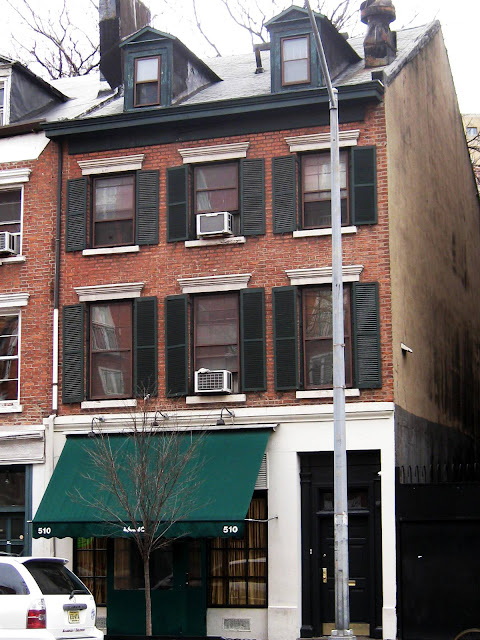 The sleepy character of the little Village of Greenwich woke up when throngs of New Yorkers fled the cholera and yellow fever epidemics in the 1820s.   Once away from the congested conditions of the city to the south and enjoying the open air of the surrounding countryside, many of the newcomers stayed on.


Realizing the opportunity afforded by the burst in population, the brothers, Isaac A., Jonathan and Charles C. Hatfield, purchased land from Richard Amos in 1825.  The plots stretched along Hudson Street, between Christopher and Amos (later renamed 10th Street) Streets, and around the corner along Amos.


Two years later Isaac, a builder-carpenter, completed construction of a row of five brick-faced homes along Hudson Street.   Three and a half stories tall, they were typical of the Federal-style homes that were cropping up in the neighborhood.  Prim pedimented dormers punctured the peaked roofs and simple lintels and cornices decorated the facades.


Among them was No. 510.  Like its neighbors, it was intended for a working-class family financially secure enough to afford the few extra touches like the Flemish bond brickwork.  That security slipped away from H. Meyers, apparently.  He was living here in 1854 when he suffered the embarrassment of having his name published by New York County for failing to pay $52.88 in back taxes (a little over $1,000 today).


Later, in the early 1860s, Amelia A. Blakely lived here.  She was a teacher in the Primary Department of School No. 16 on West 13th Street and would stay on for several years.  Her very existence here reflected the still-respectable nature of the neighborhood, while the area nearer the river just a few blocks to the west filled with grittier elements--a brewery, soap plant, and iron works for example.


The house was owned by the Groosjean (sometimes spelled Grosejean) Family following the Civil War.  It would appear that the ground floor had already been converted to commercial use by 1876, for the Board of Aldermen paid E. Groosjean paid rent on the premises “for general election November 7” that year.


The family leased apartments upstairs and the commercial space on street level.  At the turn of the 19th century it was home to the headquarters of International Teamsters’ Union Local 449.  Cornelius T. Shea was Treasurer of the union and shocked the neighborhood when he was arrested in May 1909 for having stabbed Annie Walsh at No. 222 West 13th Street eleven times.  The New York Times reported on May 23 that “The woman is in St. Vincent’s Hospital, where the physicians say she will probably die.”


The Teamsters gathered at the Hudson Street headquarters on May 22 and began raising funds for the defense of their treasurer.  “Considerable sympathy was expressed for Shea,” remarked The Times, which added “They sought to excuse Shea by saying that he was a man of quick temper.”

Twenty years later the space was being leased by the Salvation Army.  In 1928 brothers Harris and Maurice Mandelbaum, real estate operators, began eyeing the row of century-old buildings for potential development.   By the spring of 1929 they had bought up Nos. 502 through 508 Hudson Street and Nos. 125 and127 Christopher Street.  The New York Times noted that “the parcel at 510 Hudson Street” was “the ‘key’ to the adjoining holdings.”


On June 6, 1929 negotiations were complete.  The Mandelbaums purchased the old house from Elvina and Muriel Groosjean, seemingly sealing the doom of all the old structures.   The brothers now controlled 112 feet along Hudson Street and 118 feet on Christopher Street.  The New York Times reported that “a resale of the entire plottage to builders for improvement with an apartment house is pending.”


Perhaps only the effects of the Great Depression saved the venerable building.  But for whatever reason, No. 510 and its nearly identical neighbor at No. 512 survived.  But they were in sad condition.


Four years later No. 510 was vacant and neglected.  In 1933 architects Scacchetti & Siegel whose offices were at No. 1775 Broadway, were commissioned to convert the decaying building into a “store with apartments above.”  The firm was faced with a daunting task.


The architects described No. 510 as “old, decrepit, obsolete and unoccupied, this old building was a liability.  Nevertheless, in spite of its hundred years of use it was still sound structurally.”


The 1930s was a period not particularly known for its sensitivity in restoration, especially of structures with no connection to historical events.  Yet No. 510 Hudson Street was essentially unaltered above street level.


Another sympathetic conversion came in 1970 when the building was altered for an art supply store and commercial art gallery at sidewalk level with one apartment on the second floor and a duplex above.  Then, for years in the late 20th century it was home to Café Sha Sha, a popular stop for pastries and coffee.N


Today Employees Only, an “American Nouveau” restaurant serves dishes like duck confit salad , a Serbian charcuterie plate and “serious cocktails” according to New York Magazine.  The venerable house has seen much change in its nearly 200 year existence; but has stubbornly resisted that change above street level.

non-historic photos taken by the author
Posted by Tom Miller at 3:40 AM