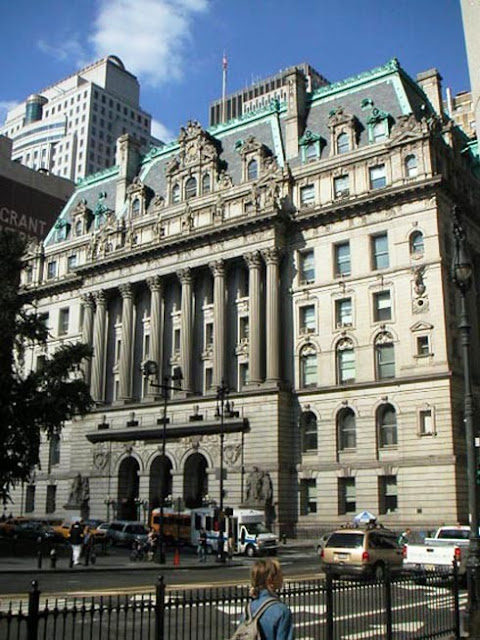 By the second half of the 19th Century the need for a larger, more secure hall of records was evident. The population of Manhattan had grown from 61,000 in 1800 to 942,000 in 1870. Necessarily, as the population burgeoned so did the amount of paper records to be archived. In 1888 the Sinking Fund Commission was formed to erect the new facility.

Concurrently, a plan to demolish the elegant 1803 City Hall was initiated and John R. Thomas won the commission for its replacement with an exuberant Beaux Arts design. Thomas was a prolific architect credited with designing more public and semi-public buildings than any other designer in the country, including armories, the old Stock Exchange and more than 150 churches.

Public outcry against the demolition of City Hall was immediate and strong. Subsequently the State Legislature voted down a new City Hall and, as compensation, the commission for the new Hall of Records was given to Thomas. 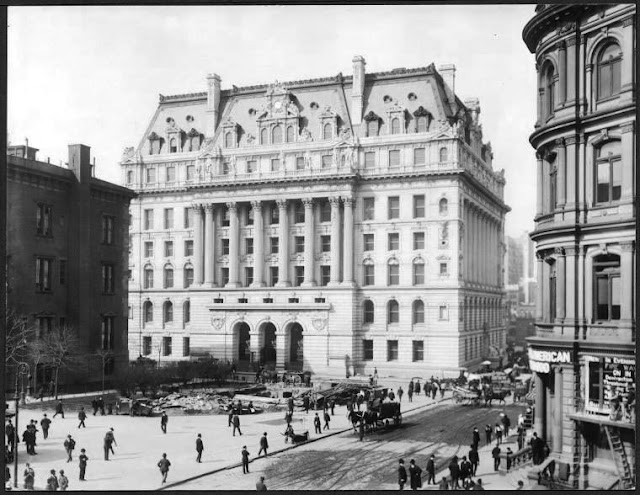 It would be nearly a decade before the city obtained the land for the new building. The Board of Estimate and Apportionment met on December 16, 1897 to award the building contract to John Pierce, who had bid $1,997,900. The board estimated the total cost to be $2.2 million.

By the time the building was finally completed that figure would rise to $8 million.

The theory of the movement held that monumental and classical buildings would not only beautify the urban area, but citizens who were surrounded by civilized structures would behave in a civilized manner. Thomas’ Hall of Records would be monumental beyond imagination.

A lavish mansarded giant constructed of granite from Hallowell, Maine (the same quarry used for the stone of the State Capitol building), it would be embellished with sculptures on three levels. Groupings closest to street level would depict “various races and nations,” the second tier would be portraiture of distinguished city fathers, while the uppermost sculptures would be allegorical.


As sumptuous as his exterior design would be, the interior was doubly-so. Opulence was created with yellow Siena marble, mahogany woodwork, and an intricate arched mosaic ceiling in an Egyptian motif. White marble sculptural groupings of “The Consolidation of Greater New York” and “Recording the Purchase of Manhattan Island” would sit above the east and west doorways.

The inlaid foyer floor would be of pink Tennessee and Blue Beige marble, illuminated by a bronze chandelier and wall sconces; even the radiator covers would be bronze , topped by spread eagles atop globes.

If the visitor was struck by the foyer, he would be awed by the lobby where a grand baroque split staircase rose two floors to a balustraded level. A century later, author Bill Harris in his “One Thousand New York Buildings” said “Want to see the Paris Opera? Step into the lobby right here.” Thomas’ interior design was one of lavish theatricality.

Ground breaking did not occur until 1899 and the cornerstone was laid in April 13, 1901. Shortly thereafter, on August 28, John R. Thomas died unexpectedly. Reaction on the part of the new Tammany-backed Mayor Robert A. Van Wyck was immediate.


He gave the job of completing the project to architects Horgan & Slattery, also connected to Tammany Hall. The firm recommended various alterations to the plan, which The New York Times grumbled was “horganizing and slatterifying” the design.

On April 28, 1902 the first of the eight mammoth granite columns was hoisted into position. Carved in a single piece, it was 36 feet high, 4 feet two inches in diameter and weighed 41 tons. Transporting the monolith from Pier 1 took a team of 21 horses.

Construction dragged on for eight years during which time the grandiose plans for the 54 separate sculptures threatened the completion deadline. The Fine Arts Association and then the Municipal Art Society gave their opinions, chiming in on materials (bronze, marble or granite) and subject matter. “The material used is of the greatest importance, very naturally,” reported The Times. “Marble will weather, and is easily broken, but granite also is not proof against the folly and malice of boys and degenerates, of fanatics and drunken men. Bronze will stand the wear and tear of the crowds who will pass the Hall of Records, and will always contain a sprinkling of those imbeciles who knock off a finger or toe in sport or to keep as a souvenir.”

Thomas had given the commissions to two sculptors only, H. K. Bush-Brown for the roof sculptures and Philip Martiny for the rest; far too much work for the allotted time. Martiny did his work at the Hallowell, Maine quarry where the stone for rest of the building was cut. As work progressed, delays were caused when his plaster casts for the statue of former Mayor Hewitt were rejected four times. Finally on December 8, 1905 the finished 12-foot, four ton statue was completed and prepared for hoisting into place on the cornice at the sixth floor. When the sculpture was about two and a half feet from the cornice, the main boom of the rigging snapped, sending the statue plummeting to the sidewalk where it smashed.

Luckily, because of the long construction process, a new mayor took over and most of the changes to Thomas’ original design were reversed. Nevertheless, as city workers began moving in to their offices in 1906 they were shocked to find that the gray and white marble on the upper floors was actually plaster.

The Times explained “The presence of the plaster where the marble ought to be is explained by the fact that the hall was planned in one administration, replanned in another, and finally planned in a third.” No graft was involved, the newspaper said. Nevertheless, “…the imitation work is very poorly done indeed, and, though the hall has been opened but a few weeks, is already beginning to show signs of wear.”

Amid the controversy, Horgan & Slattery publically admitted the substitution of materials was a mistake.

In 1961 when Centre Street was widened, the two sculptures flanking the entrance were removed to the front of the New York County Courthouse at 60 Centre Street. A year later the Hall of Records was renamed The Surrogate’s Courthouse. 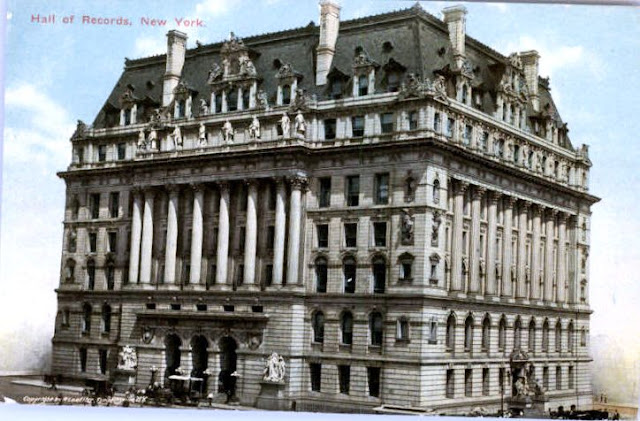 When opened, the Hall of Records was called “the most Perisian thing in New York” and a century later it could still hold that designation.
Posted by Tom Miller at 3:36 AM