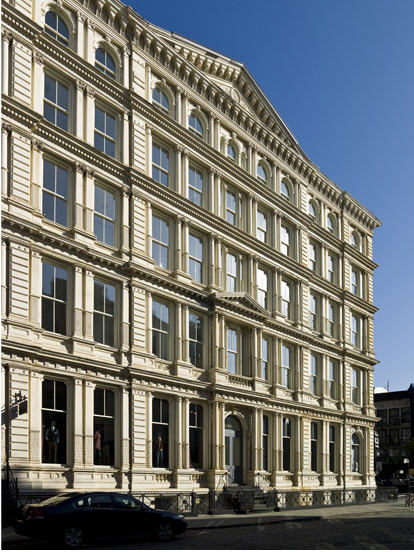 On April 29, 1874 The New York Times ran a one-line story that reported “The Atlantic Savings Bank will remove tomorrow to its new building, corner of Bond Street and the Bowery, and will in future be called the Bond Street Savings Bank.”

The bank was making a big move. The Bowery in 1874 was a thriving, exciting thoroughfare lined with German beer gardens and dance halls, theatres and businesses. The directors of the Atlantic Bank recognized the potential and the distinction of the area.

Henry Engelbert, who had designed the fashionable Grand Hotel on Broadway and the renovation of old St. Patrick’s Cathedral in 1868 and three years later the gargantuan Broadway Central Hotel, was given the commission for the new bank. 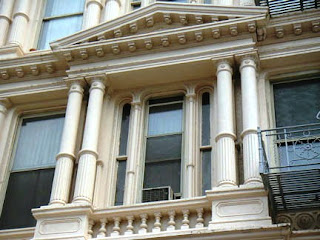 As he did in the two Broadway hotels, Engelbert designed the bank in the French Second Empire style, although passing on the mansard roof for this project. The plot of land with which he had to work, which cost the bank $89,500, was long and narrow; a long slice of Bond Street terminating on the Bowery. The architect solved the problem by treating both facades similarly; giving neither special importance. 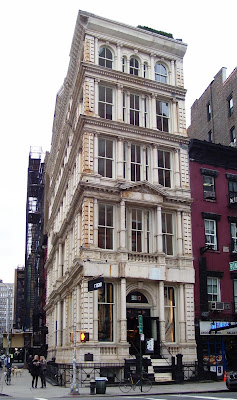 The result was an especially handsome cast iron structure. Stately columns, coupled on the Bond Street side, flanked the windows and an daunting cornice topped the fifth floor. A shallow pediment crowned the Bond Street side. Englebert’s cast iron design masqueraded as stone, giving the bank building an aura of solidity. To unify the two facades, he ran a cornice course around the building between each floor.

The bank was, however, the victim of bad timing. The year that the land was purchased and the new building project was initiated, the Financial Panic of 1873 set in, a great depression that would last for six years. Two years after opening, the Bond Street Savings bank failed.

On September 21 the bank ceased operations under order of the Supreme Court.

The German Exchange Bank took over 330 Bowery. In 1885 it was leasing a corner space to Clark R. Trumbull’s stationery store. In 1918, with World War I anti-German sentiment rampant, the bank changed its name to the Commercial Exchange Bank and continued doing business. 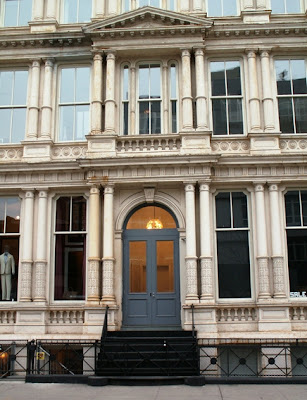 The Bowery, however, radically changed. Its reputation changed from an entertainment district to one of derelicts and drunkards. Reputable businesses moved away and buildings degraded through neglect. The Commercial Exchange Bank left No. 330 Bowery and the building was used for various purposes for a while; then was essentially abandoned for half a century, rusting and boarded up and used for storage.
In 1963 salvation for the grand old building came when Honey Waldman converted it into an off-Broadway theatre called the Bourwerie Lane Theatre. Resurrecting the Bowery’s tradition of theatre entertainment, the unexpected venue in the still-gritty area featured well-known stars and became a popular destination for theatre lovers. In its first year the theatre staged The Immoralist with Frank Langella. In 1974 it became home to the Jean Cocteau Repertory Theatre for 32 years.

When the curtain dropped on Jean Genet’s The Maids X 2 in 2006, the theatre closed it doors for good. A year later in June businessman Adam Gordon, known as the Self-Storage King, purchased the now-landmarked building for $15 million with the intention of creating a sensational residence for himself on the upper-most floors and “respectable” retail spaces below.

Changing the address to 54 Bond Street, Gordon created a triplex penthouse for himself, and two other apartments on the fourth and third floors. Working with architectural restoration firm Architectural Components, Inc., he used period-appropriate materials such as wood from an old Alabama cotton gin to revitalize the interiors. “As a developer,” he told the New York Post, “I really have a passion for reclaiming historic properties.”

The owner’s penthouse was ample – a full 4,863 square feet of interior space and 1,277 square feet of terraces and rooftop garden space. Pocket doors, 10’4” ceilings, and two full kitchens added to the comfort.
The unsightly fire escapes that clung to Engelbert’s stately façade could now be stripped away. To recreate the appearance of 19th Century glass in the residential spaces, the window glass was machine-rolled using the same process as the original. The method creates minor distortions as would be expected with vintage glass.

The window sashes were reproduced in wood, carefully retaining the original designs.

In February 2010 Gordon put the three residential properties on the market; his penthouse at $15.45 million, the fourth floor apartment for $4.95 million and the third floor residence at $4.875 million. The entire building including the lower two floors of retail space was marketed at $34 million.

Once rusting and neglected, the former Bond Street Savings Bank building now gleams like new. In its assessment of the structure in 1967, the New York City Landmarks Preservation Commission noted that “…it is an interesting example of the skillful treatment of disproportionate elements and that the history of its varied uses is a clear indication that landmark buildings can serve the needs of the community over a long period of years without necessarily being destroyed or defaced.”
Posted by Tom Miller at 3:24 AM