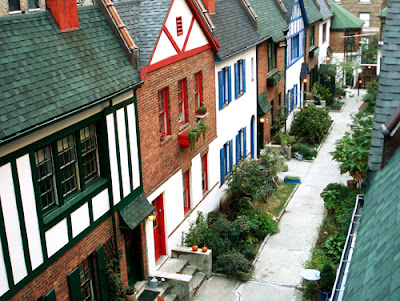 In 1920 Thomas J. Healy had big plans. The Irishman had come to New York in 1886 at the age of 15 and by the time the First World War had ended, he owned five restaurants and catering establishments, some in the Broadway theatre district like the 1000-seat Golden Glade.

Healy let it be known that he wanted to build a sixteen-story hotel on the irregular plot of land he acquired from the Eugene Higgins Estate in a 200-year lease. He put off the hotel project, however, and instead contracted architects King and Campbell to design an enchanting enclave of miniature English houses, stretching from 94th to 95th Streets between Broadway and West End Avenue.

Using for their inspiration the play “Pomander Walk,” which opened on Broadway in 1910 and featured a tiny street in 18th Century London, the architects devised 20 two-story houses facing the 20-foot wide lane and seven facing 94th and 95th Streets. 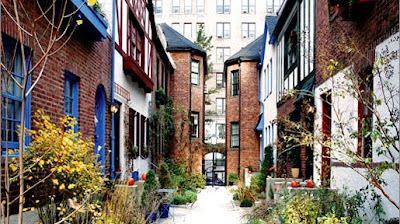 The diminutive homes were in the popular Tudor style with irregular rooflines and gables, half-timbering, brick and stucco. While they appeared to be individual houses from the outside, in fact each was a two-unit rental apartment building with separate apartments on either floor. The fairy-tale size required that the kitchenettes were tucked into a walk-in closet.

The New York Times revealed the plans on April 19, 1921, the day after the project was filed with the Manhattan Bureau of Buildings. “Of the twenty-eight houses in this picturesque settlement, sixteen will have four rooms and bath on each of the two floors and twelve three rooms and bath in each apartment.” 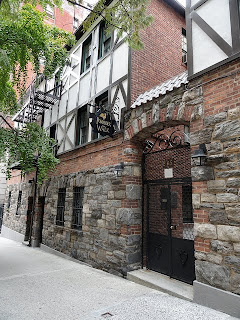 “Massive and orate iron gates, after the period of 1710, when the original Pomander Walk was built, surrounded by the insignia of the Crowing Cock, will ornament and guard either entrance to the Walk and be presided over by uniformed lackeys.”

The sub-headline to the article called it a “Street of Little Houses, Lawns, Flowers and Fountains, in Shadow of Broadway.” Each house was estimated to cost $2,950.

Only five months later The Times gave an update, saying that “West siders have watched with considerable interest the small house improvement in what was formerly a vacant plot…” The article reported that although the project was still under construction, over half of the houses “have already been disposed of by rental.”

King and Campbell intensified the miniature village effect by fronting the cottages with small-sized hedges and flowerbeds. Window boxes and lively colors create a Munchkinland, magical atmosphere. A year after its completion Architecture & Building Magazine said “The effect obtained is as though as portion of the olden times was transported through the heart of the modern world.” 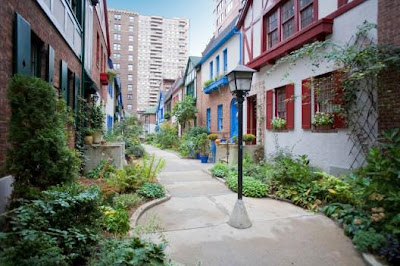 Healy, according to Random House's 1939 "New York City Guide," intended the Walk to be inhabited by theatrical people.  Immediately upon completion it was home to the likes of Rosalind Russell, stage actress Elsie Barlett, composer Herbert Stothart at #7 and Mary Warnock, a Ziegfeld Follies chorus girl at #22. Film actors Lilian Gish, Madeline and Nancy Carroll lived here as did drama critic Ward Morehouse.

If Thomas Healy did intend Pomander Walk to be a temporary project that would be razed for his once-anticipated hotel, his death in 1927 precluded those plans.

In 2005 restoration architects Cutsogeorge Tooman & Allen Architects, P.C. were commissioned to rehabilitate the facades of the charming complex. The firm executed a $650,000 masonry and stucco restoration and rebuilding, restored the wooden doors and windows, removal of façade coatings and repainting.

Pomander Walk, one of the most enchanting and delightful residential areas in Manhattan, was designated a New York City landmark in 1982.
Posted by Tom Miller at 3:10 AM