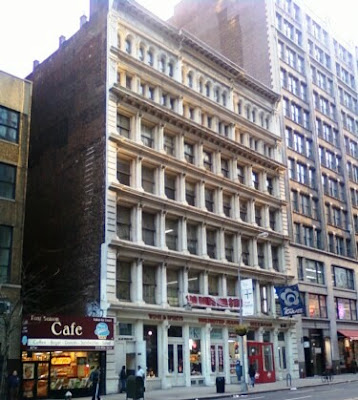 By 1886 ornate cast iron facades were lining lower Broadway and filling the blocks south of Houston Streets. Above 14th Street most merchants and developers still opted for brick and stone, with a few noticeable exceptions.

One of those exceptions was the Robert J. Horner & Co. Building at 61-65 West 23rd Street. Just east of 6th Avenue, the Ladies’ Mile, the location was ideal. Designed by John B. Snook, the building rose seven stories in a restrained Italian Renaissance style. Snook’s design imitated stone, with rusticated piers flanking either side for five stories. Large, expansive windows separated by understated Corinthian columns -- formed by wrapped sheet metal rather than being cast in iron -- provided ample natural light to the upper showrooms. Above a bracketed cornice, the smaller windows of the factory level unified the top two floors as the rectangular sixth floor windows visually joined the arched seventh floor windows.

Five sets of double tall doors, serving either as delivery , workshop, or showroom entrances were spaced along the street level.

Robert Horner started his furniture business from the new building, initially manufacturing and designing all of his goods. Horner had a keen business sense, keeping up with changes in furniture trends. While other Manhattan cabinet makers like Herter Brothers targeted only the wealthy, Horner manufactured furniture in price ranges for the middle to the upper class shoppers.

Six months after opening The New York Times wrote of the firm, “They are constantly seeking new ideas in furniture, and when they secure one do not rest content with it or push it too long, but are instantly on the alert for a newer and better design. They manufacture all their own goods, and reproduce here all the European novelties.”

The first season Horner was showing a line of Louis XVI sets “for drawing room or country house,” and heavily carved dining room furniture in oak. The fourth floor, 75 by 100 feet, was devoted entirely to bedroom sets, touted by The Times as “the finest exhibit of the kind in the country.”

Horner’s ground-breaking concept in furniture marketing was to build in the upper floors furnished rooms to “show young married couples how they should set about furnishing their houses.” A drawing room, dining room, bedroom, library, billiard room and two halls were staged; initiating the standard of furniture showing used universally today.

The R. J. Horner store became the mainstay for new couples or for those redecorating their homes as styles progressed. By the early 1890s Horner no longer exclusively manufactured his designs, but glowingly advertised his imported furniture made expressly for Horner abroad. Venetian sideboard, Louis XV writing desks and trendy “Persian” divans and upholstered pieces filled the store. “In fact,” said The New York Times in 1891, “there is nothing lacking, in variety or elegance or workmanship, in the display of imported novelties.”

Business slowed in 1893 when the Financial Panic struck. Mired in the depression, customers cut back on unnecessary expenses – like refurnishing. In a cunning marketing scheme to draw customers, R. J. Horner & Co. installed the Princess Metternich salon when the Chicago Exposition was dismantled. “This is doubtless one of the richest collections of furniture in existence,” reported The Times, “and New-York people are fortunate in having an opportunity to inspect the beautiful salon. It is shown as it appeared in Chicago, when it elicited the greatest admiration.

The side walls and ceilings are of painted tapestry panels, finished off in white ad gold. The room is a reproduction of the salon of the Princess.”

Despite the many gawkers who were enticed by the display, Horner still felt the financial pinch of the depression. “There has been no perceptible improvement in our business,” he told a reporter, “because furniture is very much a luxury. But as soon as business in other lines picks up we shall feel it, and we think business will revive very soon.”

As the economy recovered, business did resume and R. J. Horner continued successfully in its 23rd Street factory and showroom. As the turn of the century arrived, however, the neighborhood was changing. One by one the ladies’ dry goods emporiums were abandoning 6th Avenue to move north of 34th Street. The many theatres that once dotted the thoroughfare were closing down, as well, as the Broadway theatre district expanded.

On March 19, 1904 a catastrophic fire nearly ended the Horner business as well as its 24th Street warehouse and factory. At 10:30 in the morning an explosion of benzene was so powerful it was heard “for a considerable distance and was immediately followed by a sheet of flame that burst through the windows on Twenty-fourth Street,” reported The Times.

Although the fire department reacted quickly, water pressure was so weak that they were unable to get the conflagration under control. By the time fire headquarters could arrange for the Water Department to increase pressure, the entire factory section of the building had been destroyed, a loss of between $50,000 to $75,000.

Nine years after Horner repaired the burnt building, the company moved to 36th Street near Fifth Avenue, following the movement of the shopping district. A year later, in 1914, the building was remodeled by Strobel & Wilken Company, a large toy importing firm. The move came at a time when the choicest toys were made in Germany and Austria and when those countries were entering dark political days with the assassination of the Archduke Franz Ferdinand that year.

In 1915 England set up a blockade that prohibited German and Austrian shipments from leaving Europe. Emil L. Strobel complained bitterly. “We have thousands of dollars worth of German toys ready for shipment at Rotterdam and elsewhere. Notwithstanding the face that these goods have in any instances been paid for, we cannot get them. Besides the monetary loss to American merchants involved in the non-delivery of goods, the holiday trade will suffer severely if shipments of toys are not forthcoming in the immediately future.”

With the United States’ entry into the war, Strobel found himself standing alone in his arguments. In 1918 The United States Association of Toy Manufacturers met in the Hotel McAlpin and resolved to push Congress to enact a law against importing German-made goods.

In reaction to Strobel’s continued patronage of German manufacturers, the American Defense Society sent him a telegram reading “To demonstrate your 100 percent Americanism and to show Germany that goods made by her bloody-handed baby killers will not be tolerated in America, we request you to refuse shipment of German toys consigned to you on Nieuw Amsterdam as has already been done by Butler Brothers.”

Walter Strobel responded, instead, that “I would be unable to stand the $50,000 loss this would involve. I am willing, however, to sell the goods at cost for any one to dispose of as they think best.”

After the war business returned to normal. By 1937 the building was home to the National Silver Company, a distributor of cutlery. Like its predecessors, things did not always go smoothly. In February of that year the Federal Trade Commission took exception to National Silver’s use of the words “stainpruf” and “stainless.” The Commission felt the knives, forks and spoons were, indeed, stainable and issued a cease and desist order again the firm. 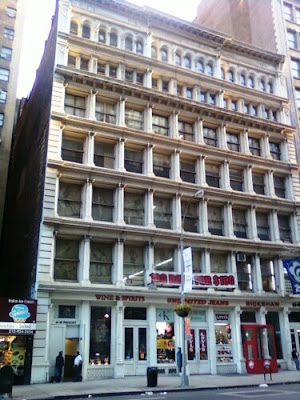 Twenty-third street today is nearly unrecognizable as the street where Robert Horner’s furniture store set up business. Yet his cast iron building is in a remarkable state of preservation with even the first floor remaining unaltered. Even the slim Victorian double street doors are intact, a rare example of architectural survival.  It is, as the AIA Guide to New York City, said "a simple, elegant façade.”

non-credited photographs were taken by the author
Posted by Tom Miller at 3:42 AM