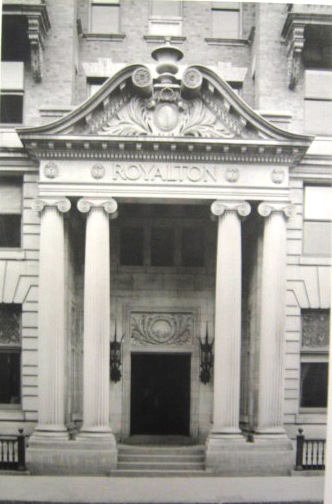 Unmarried men in Manhattan faced a problem when it came to finding housing in the late 19th Century. Bachelors were not generally welcomed by most boarding houses and respectable apartment houses. Yet the number of unmarried men in the city skyrocketed between 1870 to 1890, when about 45 percent of the male population was single.

Available accommodations were barely adequate yet one observer in 1898 commented that “the bachelor was not considered to be entitled to much consideration; any old thing was good enough for him…Anyone who was old enough and had the means to marry and yet did not, was not thought to be entitled to anything better.”

In 1880 “bachelor flats” had began emerging to fill the obvious niche, one of the earliest being the Benedick on Washington Square which was completed that year. Ten years later The Real Estate Record & Builders Guide said that the bachelor flat “is a product of our modern life. It is not a social fad, ready to disappear directly. It has ceased to be a novelty. It has come to stay, for it filled a gap in the life of every unmarried man who has become weary of the boarding house, the furnished room, or the hotel.”

In 1898 another niche was filled – a bachelor apartment building for unmarried men of means. Designed by Rossiter & Wright, the Royalton Hotel rose at 44 West 44th Street, smack in the middle of the gentlemen’s club district, making it extremely convenient to well-heeled bachelors.

The red brick Regency-inspired hotel sat atop a two-story limestone base dominated by a massive pedimented entranceway supported by two Ionic pillars. For the convenience of the tenants, entry could be made from either 43rd or 44th Streets.

Although construction was not without problems – several general strikes were ordered when, for instance, the Housesmith’s Union complained that work being done by the Metal Wire Lathers’ Union belonged to them – the house opened for business in 1897.

The dignified interiors and accommodations led the Cornell University Club to take rooms on the first floor that first year for $2500. A year later horse-playing teen aged employees brought bad press to the hotel when Morris Hotkiss, 18 years old, closed the elevator gates on hallboy William Moore, also 18, who had “annoyed him on the trip to the top of the house by fooling and skylarking.” 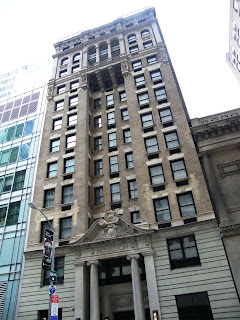 Moore attempted to force the gate open as the elevator descended, crushing his body and killing him.
Although it was, as The New York Times referred to it “a bachelor apartment house,” the Royalton boasted a first-class dining room and restaurant on the first floor which attracted the cream of New York society. On January 23, 1900, having been to the Lyceum Theatre, The Count and Countess de Castellane were the guests of Edmund Randolph “at a little supper” along with Mr. and Mrs. George J. Gould and Mr. and Mrs. Sidney Smith.

A reception for the US Ambassador to the German Empire was given by the Cornell University Club in their clubrooms here in 1901 and the same year the New York Yacht Club hosted a series of lectures on ship designing.

Among the wealthy residents were James Amm, an oil operator and refiner who died leaving a $6.75 million estate, and Frederick Kursheedt, president of Kursheedt Manufacturing Co.

By 1904 the fine club buildings and impressive hotels that lined 44th Street were included in the routes of the tourist observation coaches. “The observation coaches turn from Fifth Avenue toward Sixth Avenue into Forty-fourth Street,” explained The New York Times, “’And now,’ says the festive guide, through his megaphone,’we are entering Rubberneck Row.’

For the next four minutes the sightseers sway their heads from side to side looking at Delmonico’s, Sherry’s, the Harvard Club, the Yale Club, the Century Associate, the New York Yacht Club, Mrs. Osborn’s Theatre, The American Institute, the Mechanics’ Institute, the Bar Associate clubhouse…the Royalton, and the Algonquin, which fill up both sides of the street for the entire block…”

In time the need for bachelor hotels waned and the Royalton welcomed tenants of both sexes. Its proximity to Broadway filled the apartments with theatre figures. Actresses and actors like Ruth Gates, Katharine Witchie Riggs, Alexander Granach, and Lucy Beaumont lived here. Drama critics Lawrence Reamer, who wrote for The Sun, and George Jean Nathan, the “dean of Broadway drama critics,” had apartments in the Royalton as did humorist Robert Benchly. Ben Haas, who wrote over 100 novels, died in his room in 1977.

In time the aging hotel became just an “average behind Times Square hotel” with little to offer in terms of modern conveniences or décor. In 1988 it was totally remodeled by designers Phliippe Starck and Gruzen Samton for hotelier Ian Schrager into a luxurious, French-inspired boutique hotel. The New York Times commented on “chair legs shaped like ram’s horns” and “a champagne bar that conjured up the inside of a genie’s bottle.”

Although the hotel’s restaurant, 44, and the trendy lobby became a fashionable meeting place for journalists and celebrities, it would all be changed again in 2007. 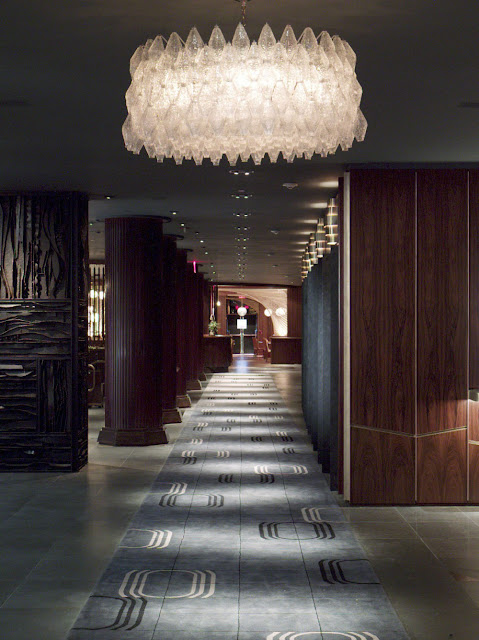 The updated 2007 lobby design - photo blog.aia.org
Purchased by the Mogans Hotel Group, architects Roman & Williams revamped the building. Restaurateur John McDonald explained that “After 20 years, what was there really needed to be completed changed to pay respect to what it was.” 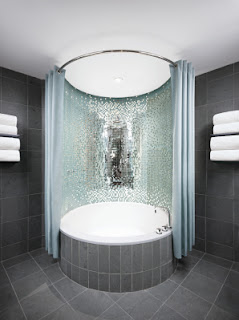 Philippe Starck did not agree. “I think if you are lucky enough to own an icon, you shouldn’t kill the icon,” he told The New York Times.

The hotel today is far from “average.” The rubbernecking at the Royalton Hotel is no longer directed at the exterior, but at the extraordinary interiors.