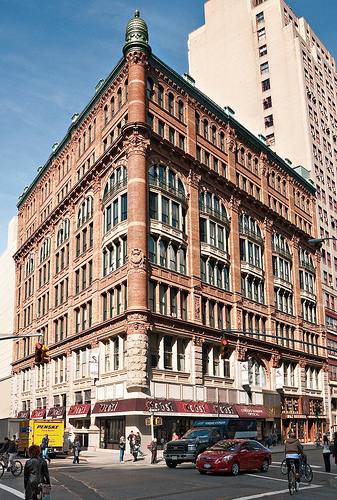 While Theodore Roosevelt was busying himself with the duties of the U.S. Civil Service Commission, the rest of his family continued its tradition of real estate and building. Rising from a long line of old Dutch settlers the Roosevelts made their fortunes as successful merchants and built numerous buildings as investments.

During the middle of the 19th Century Cornelius Van Schaack Roosevelt, Teddy’s grandfather, owned the entire blockfront on Broadway from 13th Street to his grand mansion on the corner of 14th Street. After Cornelius died in 1871, the house was demolished and replaced by the Domestic Sewing Machine Company building.

In 1893 the family initiated their most ambitious project yet – the $500,000 Roosevelt Building on the corner of Broadway and 13th Street where six small buildings stood. Principal owners were James A. Roosevelt and Robert Barnwell Roosevelt, with W. Emlen Roosevelt, John Roosevelt and Frank Roosevelt owning stock.

On January 26 of that year The New York Times reported on the site saying “C.V.S. Roosevelt dwelt on the corner of Fourteenth Street and Broadway until his death, in 1871, and the rest of the block, extending to Thirteenth Street, was for many years his garden. This was almost the last of the Broadway mansions to give way to the march of business.”

The Times went on to say that the structure intended for the plot “…will be fire-proof throughout. The walls will be of brick, red granite, and terra cotta, and there will be a large red granite arched entrance on Broadway. The frame of the building will be of steel and the plan of the construction will be a modification of that which has been adopted in Chicago in large office structures.”

Architect Stephen D. Hatch was commissioned to design the structure, which was completed within a year. At the time, Broadway just south of Union Square was becoming lined with men’s clothiers and haberdasheries as the more female-oriented emporiums sprouted up along 6th Avenue’s “Ladies’ Mile.” 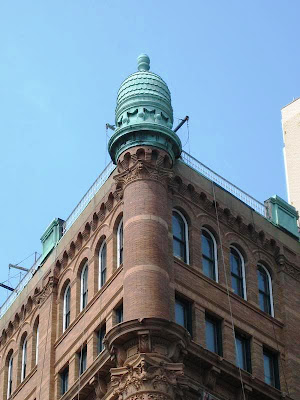 Photo wireednewyork.com
Sitting on a rusticated granite base, Hatch’s Romanesque Revival tan brick building was lavished with terra-cotta ornamentation – grinning horned demons, twining florals, nude sea nymphs and twisted columnettes. It was capped with an ambitious copper cornice with a beehive corner turret. Above the main entrance on Broadway the letters “R” and “B” were emblazoned on shields. 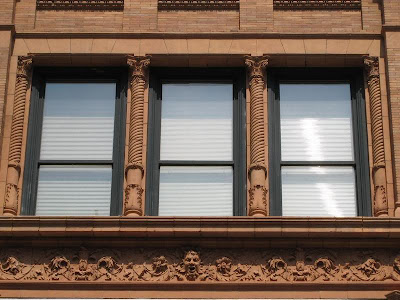 Photo wirednewyork.com
The Real Estate Record & Guide – always quick to criticize – was not overly-fond of the building, noting the “vast amount of non over-admirable decoration.”  Nevertheless, it filled relatively quickly with menswear businesses like Hackett, Carhart & Co., clothiers, on the first, second, seventh and eighth floors; B. Schloss & Brother, manufacturers of cloaks; Crown Suspender Company on the third floor; Nanotuck Silk Company, makers of men’s neckwear and “squares” on the fourth floor; Brainard & Armstrong on the fifth; and the Altman Neckware Company on the sixth floor. 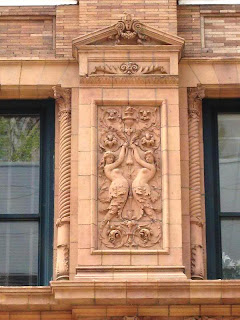 In 1896 the pioneer motion picture concern American Mutoscope Company took space here. Within a few years it would change its name to the Biograph Company, employing among others director D. W. Griffith.

The building that The New York Times had publicized as “fireproof” suffered a devastating conflagration on February 26, 1903 that started in the Altman Neckware offices. Collapsing ceilings crashed through floors and exploding plate glass windows showered firemen with falling glass. The top three stories were ravaged, seven fire fighters were seriously injured and Captain John T. Andariese of Engine No. 1 was killed when he fell two stories through a gaping hole on the sixth floor.

The Architectural Record & Guide smugly commented that “Nothing burns so readily as a fireproof building.”

In 1912 Hackett, Carhart & Co. filed for bankruptcy and little by little as the shopping district moved north up Fifth Avenue, the area south of Union Square changed. Ohrbach’s mens store leased the 40,000 square foot building in January 1937 and spent $150,000 on renovations. Two decades later the firm was still there, however in a much grittier neighborhood.

By 2007 The Roosevelt Building, which the AIA Guide to New York City called “a majestic expression of Romanesque Revival,” was dirt-covered and abused. The copper cornice was gone and the street level was a mish-mash of modern storefronts. The building’s owners commissioned Israel Berger Architects to do a complete restoration of the façade, including cleaning, historic paint analysis for repainting the iron spandrel panels, replication of the terra-cotta elements too damaged to salvage and the reproduction of the lost copper cornice.

Stanford Chan, the director of restoration, told The New York Times “We treated it like a landmark even though it isn’t one.”
Posted by Tom Miller at 2:38 AM