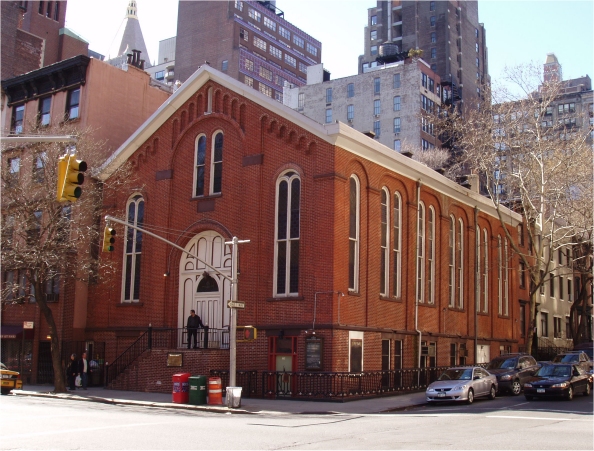 The structure, which could accommodate approximately 500 worshippers, was situated on a high brick basement level.  A short stoop led to a decorative, multi-paneled doorway.

On May 15 of that year, The New York Times announced that “The Lexington-avenue Baptist Church, (late Rose Hill) corner of Lexington-av and 30th-st., will open their Lecture-room in their new building, the Lord willing, next SUNDAY.  Services in the morning, at 10-1/2 o’clock, 3-1/2 o’clock in the afternoon, and 7-3/4 in the evening.  The pastor is expected to preach in the morning, Rev. THOMAS ARMITAGE in the afternoon, and Rev. J. L. HODGE, of Brooklyn, in the evening."

A year later, in reporting on the naming of Rev. P F. Jones as pastor, the newspaper commented on the building. “The church has recently been erected, is plain and capacious, and its congregation daily increasing.”

By 1856, the area around the church was developing. The New York Times published a list of the many high-stooped homes and several new churches being erected throughout the neighborhood.  Within four years the Baptist Church had sold their building to the Episcopal Church of the Mediator.

As part of its updating, in 1863 the church purchased the ornate pipe organ built by Henry Erben in 1840 for the French Episcopal Church du St. Espirit at Franklin and Church Streets.  The New-York Spectator had described the organ on July 6, 1840, saying “The case of the organ is entirely different from any yet constructed in this country.  It is ornamented with carved columns, representing the palm trees at Athens, surmounted by a cornice enriched with carved water leaves and honey suckles, the whole bronzed and gilt in the highest style of elegance.”

﻿On February 1, 1869 the Church of the Mediator sold the church to the First Moravian Church for $35,000 and relocated to the southeast corner of Sixth Avenue and 34th Street.  The Moravian Church, which had been without a permanent building since their Houston Street property was sold in 1865, held its first service in the Lexington Avenue edifice on April 18.

The church had remained too long in Houston Street.  By staying there after conditions had become well-nigh insufferable, it seriously damaged its strength and prestige. This detriment was increased by the homeless wanderings after the church-property had been sold.  It was therefore like starting afresh when the little congregation began its labors at Lexington Avenue and Thirtieth Street.

The Moravians were zealous in their missionary efforts and on January 27, 1881 Reverend William H. Weinland gave “an illustrated lecture in the church on ‘Alaska,’ a subject in which he was not only deeply interested but one with which he was thoroly [sic] acquainted because he had made, in company with Missionary A. Hartmann, during the previous year, an exploratory visit to that distant field.”  More than 200 people attended the lecture.

Because worshippers complained that the church was difficult to find, a bronze tablet was affixed to the façade in December 1890 that read, “First Moravian Church of New York, Founded A. D. 1748.”  Stocker noted, “To a certain extent this difficulty was obviated by the tablet."

The lecture room was refurnished in February 1893, at which time the first “love feast,” a Moravian tradition, was celebrated in the Lexington Avenue church.  Improvements included new chairs, gas fixtures, window shades carpeting a pulpit and three pulpit chairs.

A large space behind the lecture room “hitherto utilized for storing boxes, ash-cans and all sorts of junk,” according to Stocker, was renovated into a church parlor by architect James Grunnert.  A concrete floor was laid, the walls “tastefully decorated,” and furnishings such as an oak library table and sectional bookcase were brought in along with portraits of the leaders of the church and other “pictures of historic value.”  At the same time electric lights, a steam heating plant and a kitchen were installed.

During the summer of 1894 the main church was renovated “from roof to foundation.”  Carpeting was installed and the walls and ceiling “frescoed.”

By the 1920s, the neighborhood had substantially changed. Stocker commented that “Altho [sic] the slums are not many blocks away, the church is not located in the slums.  On the contrary, the surroundings of the church are clean. The encroachment of business is slowly but surely driving residents from the neighborhood.  This has the advantage of keeping away cheap tenement houses, but it also restricts the immediate field of the church’s labors.” 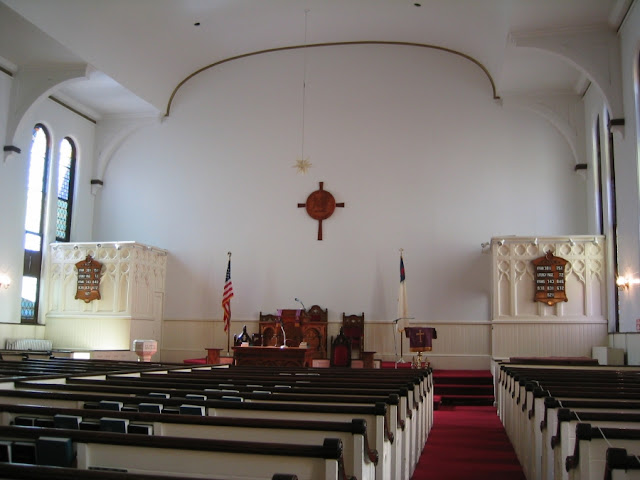 Today the prim brick church has changed little.  Inside the clean white walls and painted woodwork attest to the simple values of its congregants and the extremely rare and beautiful Henry Erben pipe organ still stands in the organ loft.
UPDATE:  A permit for "full demolition" of this building was issued on August 25, 2022.
Posted by Tom Miller at 3:02 AM