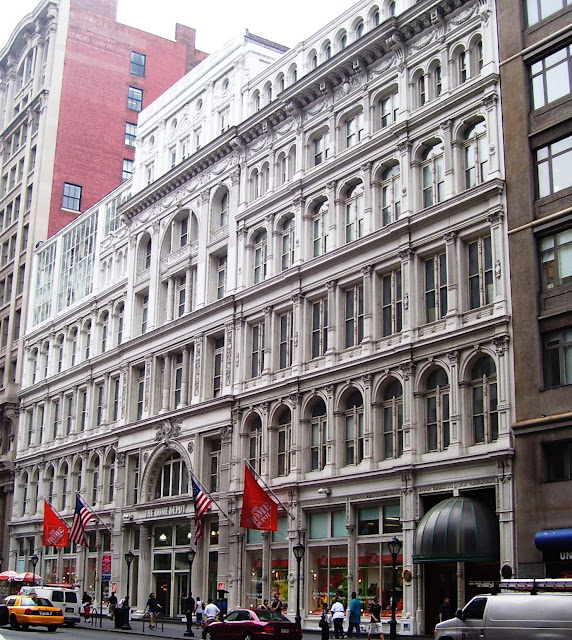 The Stern boys, Louis, Benjamin and Isaac, sons of German Jewish immigrants, started their dry goods business in Buffalo, New York in 1867. A year later they moved their one-room store to New York City. With apparent marketing genius, the brothers quickly outgrew two stores and by 1878, despite the financial panic that was bankrupting businesses city-wide, were ready to make their mark on Manhattan’s emporium district.

As the great stores crept up 6th Avenue from 14th Street, creating what would become The Ladies’ Mile, Sterns Brothers Dry Goods opted for 23rd Street, around the corner. Wide brownstone residences lined most of the block and the imposing white marble Booth’s Theatre anchored the corner of 6th Avenue and 23rd. The brothers purchased three lots in the middle of the block, between 5th and 6th Avenues and commissioned German-born architect Henry Fernbach to design their store.

On June 2,1878 The New York Times announced the anticipated store. “On Twenty-third street the neighborhood of Sixth-avenue is to be improved by the erection on the lots Nos. 32, 34, and 36 of a store, about 75 feet front, for Stern Brothers,…The estimated cost is about $100,000.” The article said the new building would be five stories tall, occupied entirely by Stern Brothers and was expected to be completed “early next year.”
﻿﻿
﻿﻿ Instead, the impressive cast iron emporium was finished in five months and one day. Displayed in the Renaissance Revival-style emporium were imported goods targeting middle-class to upper-class shoppers. On opening day, October 22, 1878, The Times reported “Among the novelties of which Mr. Stern is particularly proud is a large ostrich feather made in imitation of an American flag, the first ever made. The display of lace goods is very fine. The novelty display is too varied and extensive to attempt description and the same is true of all the other departments. The firm expects to have everything in apple-pie order before the opening hour this morning.”

﻿﻿
﻿﻿In a forward thinking innovation at the time, the Stern brothers installed a dining room for employees in the basement . A separate carriage entrance on 22nd Street ensured that the wealthy customers did not have to rub shoulders with the more common shoppers entering on 23rd Street and doormen in silk top hats held the doors. Invitations were sent to preferred customers and private showings were held annually when new fashions were introduced.


Within only two years the new store was too small. “The remarkable increase in the business of the Messrs. Stern Brothers, the dry goods merchants, has made imperatively necessary the building of a large addition to their already spacious store,” said The Times on August 6, 1880. The houses at Nos. 23, 25 and 27 to the east of the building were purchased and expansion begun. In order to rush construction, powerful electric lights were brought in so workman could work through the night.

The extension did not pretend to be anything but an addition; there was no attempt to create the illusion that both sections had been designed together. Nevertheless the arched windows and connecting cornices joined the original to make a handsome façade.

While 5th Avenue socialites would shop here for Worth suits, for instance, priced at $375 in 1879 or one by Pingat in beige-colored silk for $400, less moneyed shoppers could choose among items like parasols ranging from $2.50 to $25.00. In 1884 The Times remarked “And believing the nimble sixpence to be better than the slow shilling, they mark their goods at prices of which no reasonable buyer can complain.”

Their marketing strategies and diversity of merchandise worked. In 1885 another extension was planned. “Not content with the enormous business which they have heretofore done in their large establishment on West Twenty-third street, Stern Brothers last year determined upon enlarging their actual selling space and decided to build an extension to their building,” said The Times on September 21, 1886.

One hundred square feet of land was purchased between 22nd and 23rd street to the west of the building and on June 30, 1886 construction began. Within three months the $150,000 addition was completed, matching the first addition to the east. Sterns was now employing a staff of over 1500, there were 1800 incandescent lamps – the largest amount in any building to date – and thirteen elevators. On the second floor was a “unique little reception room, fitted up with artistic taste for the lady shopper…and Stern’s to-day is the only place in the city where such a thing can be found,” reported The Times.


The enormous space was still not enough and in 1892 Architect William Schickel enlarged the building for the final time.

In 1902 Macy’s moved from 14th Street to its gargantuan new store on 34th Street, sparking the upward migration of the retail stores from the Ladies’ Mile. One by one the giant emporiums were abandoned until, on September 2, 1913 Stern Brothers joined the trend. The gleaming white 23rd Street store was emptied as Sterns moved north to 42nd Street.

The elaborate cast iron building that a century later the AIA Guide to New York City would say “reeks of birthday cake with vanilla icing” slowly declined. By mid-century it had been converted to industrial and warehouse use, with a mish-mash of street-level stores.

Change came in the 1980s as the Ladies’ Mile buildings began being rediscovered. Hasbro Toys transformed the rusting structure into its offices and showroom. To prevent espionage of next season’s products, the company blocked out the ground floor windows. Stern Brothers became widely known as the Hasbro Building.

It was during this time that the Tom Hanks motion picture Big used the building as the headquarters of MacMillan Toy Company where Josh Baskin went to work.

In 1986 an well-intentioned but unfortunate updating by Rothzeid Kaiserman Thomson & Bee removed much of the easterly two floors, replaced by glass curtains; exceptionally out of keeping with the architecture.

In 2001 the toy company decided to relocate and the 120,000 square feet it had occupied became available. An unlikely tenant, Home Depot, took over the space in 2004 and Stern Brothers’ immense emporium shines again.

non-credited photographs taken by the author
Posted by Tom Miller at 3:33 AM