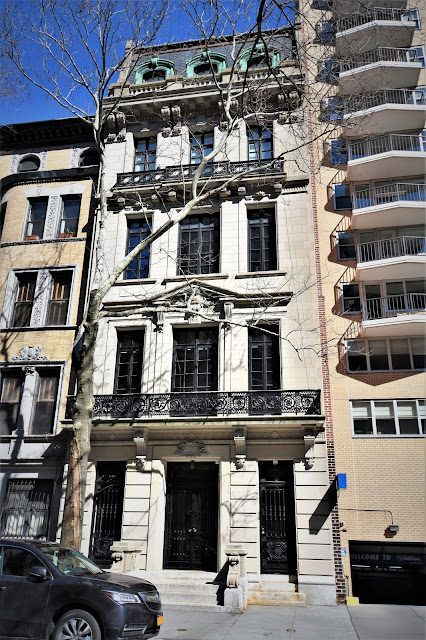 In 1909 Erdmann and his wife, the former Julie Price, purchased the property at No. 15 West 68th Street, just steps from Central Park, and hired Buchman & Fox to design a residence that would reflect their substantial wealth.   Best remembered for their handsome commercial buildings, the architects were also responsible for lavish townhouses, like the ebullient Albert Rosenblum mansion at No. 5 East 73rd Street and the Julius S. Ulhman house at No. 24 East 81st; both completed in 1902.

The 68th Street block between Central Park West and Columbus Avenue was lined with speculative brick and brownstone rowhouses typical of the Upper West Side.  But for the Erdmanns Buchman & Fox designed a limestone-faced Beaux Arts confection that would have been more at home on the opposite side of the park.

Completed in 1910, it rose five stories.  A carved cartouche above the double-doored entranced announced the address.  A full-width stone balcony with lavish French-style railings fronted the second floor, or piano nobile (the entertainment level where the drawing room, library and dining room were located).   The French doors were capped by a cornice and triangular pediment overflowing with a cartouche surrounded by oak leaves.  Carved fish-scales spilled over the elaborate keystone.

A narrower but no less extravagant balcony fronted the fourth floor; while a third sat behind a stone balustrade atop the heavy, stone-bracketed cornice.  The top floor took the shape of a slate-shingled mansard with copper-clad dormers.

The couples' names appeared in print most often not because of costly entertainments, but for their numerous philanthropic works.  The year they moved into the 68th Street mansion, for instance, Julie established "perpetual beds" in the Mount Sinai Hospital in honor of her parents, Edward A. and Bertha R. Price.  And when Dayton, Ohio was devastated by the Great Flood of 1913, prompting New Yorkers like Andrew Carnegie to donate $10,000 to relief, William Erdmann joined the New York Stock Exchange's relief committee.

Julie also made news through her athleticism.  The Erdmanns, like many wealthy Jewish families, summered in Deal, New Jersey where they were members of the Hollywood Golf Club.  Julie was an accomplished golfer and routinely played in the invitational tournament for women at the Deal Golf and Country Club. 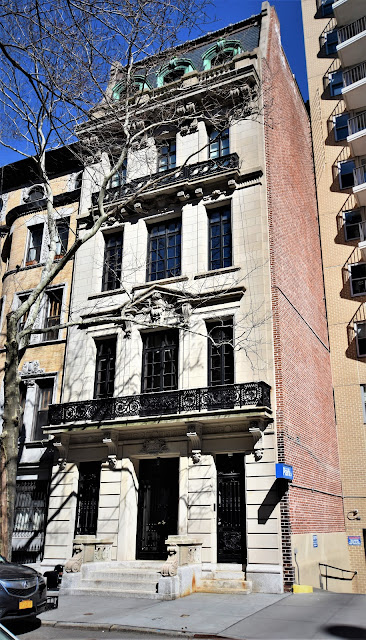 A recurring house guest at No. 15 West 68th Street was Leila Marie Koerber, better known by her stage name of Marie Dressler.  According to her biographer, Matthew Kennedy, in his 1999 Marie Dressler: A Biography, when she was in New York, "During the workweek she stayed at 15 West 68th Street near Central Park...The neighborhood and building were stately and dignified, with 'no less than three gentlemen of color in livery on guard around the portals.'"

William and Julie would have three children, William Price, Elizabeth Price, and Martin 2d (named after William's brother, the somewhat reclusive bachelor whose remarkable mansion at No. 57 East 55th Street survives today as the Friar's Club).   Tragically, William died in the house at the age of 17 in the house on March 9, 1922.

The relatively rare instances of the Erdmann's names appearing in society columns was, perhaps, due in part to their religion.  Jewish families were not readily accepted into mainstream society; and so when Elizabeth's debutante supper and dance was held in the Louis XVI ballroom of the Park Lane Hotel on December 24, 1927, the prominent names of Manhattan society were notably absent from the guest list.  Instead it was composed of other wealthy Jewish families like Guggenheim, Hellman, Koehler and Klee.

Nevertheless, the Erdmanns maintained a social presence.   On October 27, 1932, for instance, they hosted a luncheon at the fashionable White Sulphur Springs Casino in West Virginia.  That was, incidentally, the year that Martin graduated from Dartmouth College.

William Erdmann died on August 25, 1936 at the age of 61.  His passing received only a two line obituary in The New York Times.   The following year his brother, Martin, died, leaving a more than $5 million estate, much of which went to Julie.

By 1941 she had left the house she and William had built three decades earlier.  That year the mansion was converted to apartments.

In 2009 Upper West Side residents were concerned when news broke that the owner of the Erdmann house, Fine Times, intended to lease it to a European real estate company, Armonia, as "a residential club for the extremely wealthy."  After reconverting the mansion to a single-family home, it would be run more or less as a time share for the super-rich time.  Saki Knafo, writing in The New York Times on April 17, explained the firm would "charge members of the exclusive club at least several thousand dollars and, perhaps, as much as $50,000 a week to stay in the house for short times.  Membership would be restricted to people of a minimum net worth...A live-in residence manager and possibly a butler would cater to their needs." 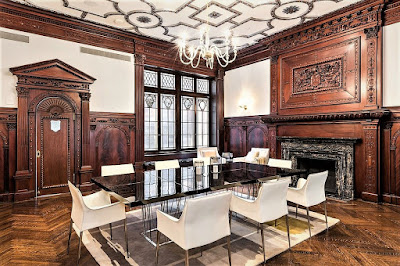 According to the Department of Buildings, however, the return to a one-family residence was not completed until 2017.  Thankfully, the 1941 conversion left much of the interior detailing intact.   The renovated 15,000 square foot home was offered as a rental in March that year for $100,000 per month.

photographs by the author
Posted by Tom Miller at 10:30 PM