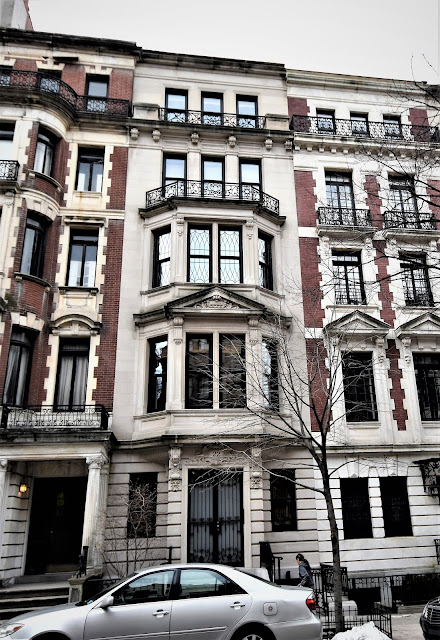 Perhaps Benjamin A. Williams understood that Andrew Carnegie's intentions to build a massive home engulfing the Fifth Avenue blockfront between 90th and 91st Street would create a fashionable new neighborhood (and subsequently higher property values).  At the time the established mansion district was still blocks to the south.

In 1899, the same year that Carnegie's architects Babb, Cook & Willard filed plans, Williams commissioned the firm of Van Vleck and Goldsmith to design four high-end rowhouses at Nos. 18 through 24 East 94th Street, between Fifth and Madison Avenues.  The plans, filed on April 21, called for "four 5-story brick and limestone or marble private houses" to cost $120,000--about $850,000 each today. 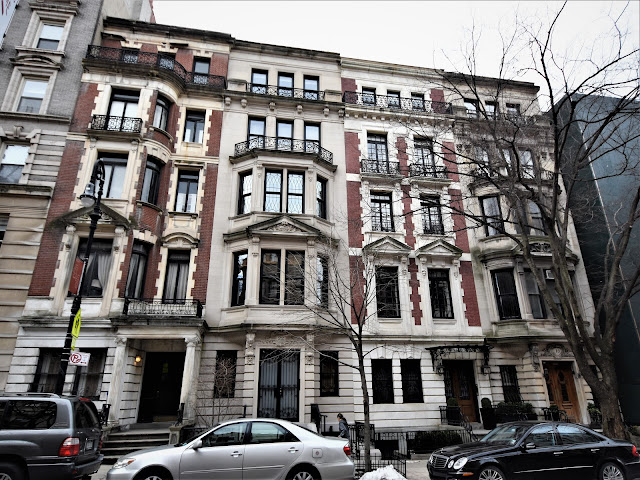 The row was completed in December 1900.  Each of the Beaux Arts residences was individually designed; yet common elements unified them as a group.  No. 22, like No. 18, was fully-faced in limestone, while the other two were clad in red brick.  Each had a rusticated stone base and matching French ironwork.

On February 23, 1901 Williams sold No. 22 to Maximilian Richter, Jr., known as Max.  A wealthy silk merchant, he and his wife, Reba, were best known for their support of political, social and educational causes.  Reba was a member of the Council of Jewish Woman and Max was actively involved in Democratic politics.

The Skolny brothers were understandably outraged at what appeared to them and the clothing industry in general as treachery.   Their suit against Richter ended in a bitter court case which The New York Times on February 6, 1910 said was "was bitterly fought."

Richter contended that as a special partner, he was not bound by the law that prohibited general partners from being "interested in two rival businesses."  Supreme Court Justice O'Gorman did not agree.   He ruled in favor of the brothers, much to the delight of other apparel merchants.  The Times reported "The office of J. Skolny & Co. was decorated yesterday with floral offerings sent in honor of their victory."

Despite that unfortunate press, the Richters continued their comfortable lifestyles.  On September 22, 1912, for instance, The New York Times reported that the couple, along with daughter Helen, had checked into the ultra-fashionable Carlton Hotel in London.

Reba was among the supporters of the Bezalel School, established in Palestine in 1906.   A trade school of sorts, it focused on teaching "carpet weaving, tapestry, filigree work, wood carving, copper work, ivory carving, beaten metal work, lace embroidery," as well as drawing, painting and sculpture.  She was among the wealthy patronesses of the first American exhibition of the school's arts and crafts, which took place in Madison Square Garden in January 1914.

In reporting on the exhibition The New York Times noted its goal was "to lift the poverty-sunken Jews in Palestine from dependence and beggary,"

Max relaxed by taking advantage of his home's proximity to Central Park where he rode horses.  He was a member of the Early Risers Riding Club and enjoyed early morning rides with other well-to-do men.  The group also worked to improve the bridle paths of the city's parks, and add to them.

Helen graduated from Byrn Mawr in 1913.  She was married on the afternoon of March 30, 1916 to Maximilian Elser, Jr.  The wedding took place in the Society for Ethical Culture on the corner of Central Park West and 64th Street.

Elser had graduated from Cornell University in 1907.  A week before the wedding he had been made manager of the newly-formed Metropolitan Musical Bureau, organized, according to The Music Magazine, to "manage concert engagements of Metropolitan Opera singers and other artists prominent in the concert field."  He was also active in theater and produced more than a dozen Broadway plays that year alone.

In 1928 Elser, by now president and owner of the Metropolitan Newspaper Service, scored a coup when he signed a contract with Famous Books and Plays and Edgar Rice Burroughs, Inc. to run the illustrated series "Tarzan of the Apes."

In the meantime Max Richter expanded his business interests.  As the Pal Mall Realty Corporation, in 1921 he and partner Lawrence S. Rolognino purchased the old Vogel Brothers building at the southwest corner of Eighth Avenue and 42nd Street.  They constructed the motion picture theater and business building, the Times Theater, on the site.  (It was replaced by the Port Authority Bus Terminal later.)

Max was a member of the National Democratic Club and a fervent Woodrow Wilson supporter.  In the spring of 1922 he contributed to the Woodrow Wilson Foundation; then decided that was not enough.  On May 7 The Times reported that he "increased a previous contribution of $100 to $250."

Reba shared her husband's support of Wilsonian principles, including the League of Nations.  On February 8, 1927 she hosted a meeting of the League of Nations Non-Partisan Association of Greater New York in the 94th Street house.   The featured speaker that afternoon was former Ambassador to Italy, Robert Underwood Johnson.

Both Max and Reba were initial members of the Lenox Hill Democratic Club, organized in 1934.  The Times explained it was "an outgrowth of the recent election and was formed as a permanent organization of Democrats who are dissatisfied with the elements at present in control of the Democratic party in New York City."  When the President's mother, Sara Ann Delano Roosevelt, visited the new clubhouse at No. 116 East 79th Street on February 17 that year, the Richters were there to greet her.

Max Richter died on December 5, 1945.  His will reflected his and Reba's tradition of support of education.   He left $50,000 (more than $685,000 today) to the Byrn Mawr College to establish a trust, "to be known as the Maximilian and Reba E. Richter Scholarship Fund," and $25,000 for an identically-named trust at the University of Michigan.

In addition Max's will established the Richter Foundation, its substantial funds to be assigned to "colleges and universities that met high standards."   Reba carefully chose the beneficiaries.  Among them, in 1948, was Brandeis University.  She established an annual financial commitment to fund that university's first assured professorial salary, known as the Max Richter Professor of American Studies.

On March 29, 1951 The New York Times announced that Reba had sold No. 22, and mentioned it was "the first change of ownership of the property in more than fifty years."  The Richter's long ownership of the residence had allowed it to survive the decades of the 1920s through 1940s when many of the Upper East Side private mansions were either razed or converted to apartments. 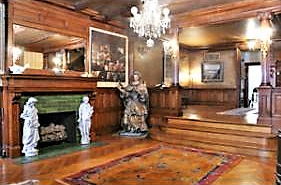 The Richter house remained a private home, with little change until, in 2009, an elevator was added.  Two years later it was gently updated, the owners carefully preserving the historic interiors.  It was recently sold for around $10.8 million.  It and the other homes of the 1900 row survive as a slice of turn-of-the-century domestic elegance preserved nearly as if in amber. 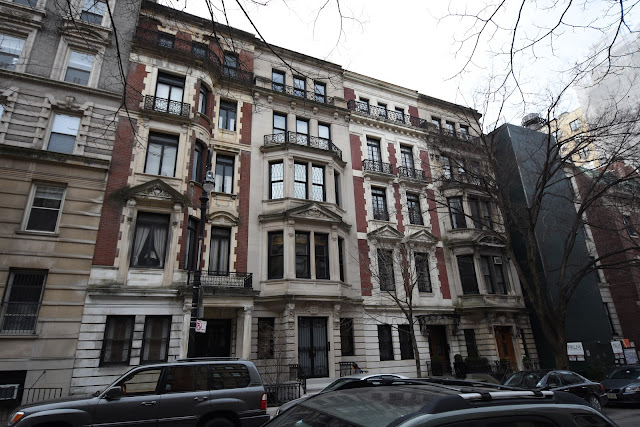