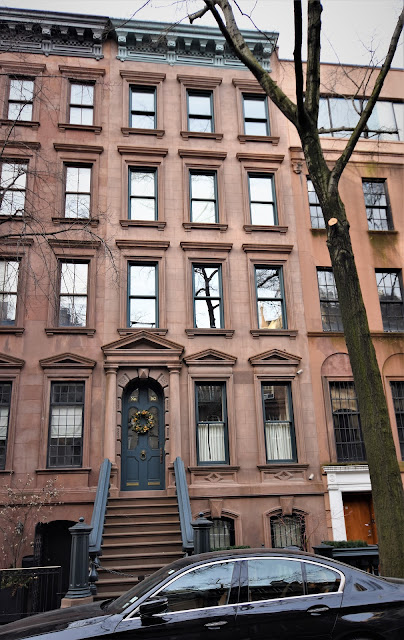 When Rowe embarked on his speculative project, development of this section of the Upper East Side had only recently begun, with mostly modest rowhouses being erected.  It was possibly the proposed construction of the Third Avenue Elevated railroad (completed in 1878) that gave Rowe bullish confidence in the neighborhood.  But his upscale houses were a generation too early.  Not until the Park Avenue train tracks were lowered and covered over in 1902 would the east side of that avenue truly no longer be on the wrong side of the tracks.

By 1874 Rowe seems to have given up on leasing or selling the private homes.  An advertisement in The New York Herald reveals he was renting individual floors in each of the houses as apartments.  "To Let--A few second and third flats of six rooms and bathroom, elevator and all improvements in those first class four story high stoop brown stone houses, Nos. 158, 160, 162 and 164 East Seventieth street, near Lexington avenue; cheap rents to small families."

The third floor of No. 162 was soon rented and the family was looking for a servant.  Even middle class families could afford the low-paid immigrant girls, mostly Irish, who cleaned and cooked.  But the single-floor accommodations meant the family did not especially want a live-in maid.  "Wanted--A young woman to do the general housework of a small family; one preferred who could go home at night; must be well recommended."

Three years later Rowe was still struggling to rent his apartments.  In advertising "those choice flats" he promised "rents so low you will be astonished to hear it."  But low rents apparently did not lure enough tenants.  Rowe lost all four houses in foreclosure in February 1880.  They were purchased by operator Addison Brown, who paid $2,500 each except for No. 164, which went for $3,000.   The bargain price would be about $57,250 for No. 162 in today's dollars.

No. 162 finally became a private house, as originally intended, when the Lewises sold it to Otto H. Walsemann on April 14, 1882 for $16,000--nearly the entire amount they had paid for all four houses.

Born in Germany, Walsemann had come to New York City in 1832.  Now he was a partner with Philip Moeser in the cigar manufacturing firm of Moeser & Walsemann at No. 255 Pearl Street.  He and his wife, Mary, had a daughter, Amelia.  By the mid-1890s she was teaching in the Girls' Department of Grammar School No. 24 on Elm Street (later Lafayette Street).

On the morning of April 4, 1894, far away from the quiet residential block where the Walsemann family lived, 28-year old Thomas Kerrigan was drinking in John Ross's saloon at No. 23 Rivington Street.  No stranger to trouble, he also went by two aliases, Gallagher and Smith.  When he got into a quarrel with Aaron Alexander, he settled the conflict by firing a lead bullet into Alexander's hip.  The wounded man died in Gouverneur Hospital the following day.

The first-degree murder case became more than a shocking news story to Otto Walsemann when he was called for jury selection on January 14 the following year.  But he had no intention of serving on a capital punishment case.

Assistant District Attorney John F. McIntyre explained to him that a conviction would result in the death penalty and asked if that would be a problem, "even though the evidence satisfied your mind of his guilt?"  Walsemann answered flatly, "yes."

After he told McIntyre that his conscientious scruples would prevent his finding Kerrigan guilty, Judge George L. Ingraham broke in.

"What do you mean by being against capital punishment?"

"Nobody has a right to take another's life."

"When did you get that idea."

On a single day, February 8, 1906, twelve houses on the block changed hands, sparked by what The Sun called "the radical change taking place in the character of the block." Martin sold No. 162 to Henry H. Hollister and No. 160 to Hollister's daughter and son-in-law, Louise and Richard E. Forrest.   In reporting on the sale the newspaper said the houses "will be modernized and occupied by the purchasers."   Hollister was the senior member of the banking and brokerage firm Hollister & Babcock, and his partner, Henry D. Babcock purchased No. 158 from John L. Martin the same day.

Hollister hired architects Harney & Purdy to handle the "renovating and enlarging" of the two houses, as reported in The Real Estate Record & Builders' Guide on June 2.  The upgrades would cost a total of $35,000--nearly $915,000 today.  (Babcock also hired the firm, his renovations costing $20,000.)

Henry H. Hollister was well-known in financial circles, called by the New-York Tribune "one of the oldest members of the Stock Exchange," but he was perhaps better known for his involvement with thoroughbred horses.  The family maintained a summer home in Islip, Long Island and for years he was the treasurer and a director in the National Horse Show Association.  The annual affair was a major social event, triggering receptions, dinners and dances.  Socialites fussed over the appropriate gowns and outfits for months ahead of time.

After Louise divorced Richard E. Forrest and moved back in with her parents, it appears that living next door to one another was no longer a good idea.  When Louise married Langdon Barrett Valentine on March 26, 1909, the "very quiet wedding," as described by the New-York Tribune, took place in the Hollister's new home on West 49th Street.  (Just two weeks later, on April 10, Hollister died of a stroke in the Long Island home.)

At the time the Hollisters were leasing the 70th Street house to Mrs. M. D. McKee, the daughter of retired Major General Alfred E. Bates.  Before long it would be rented to Robert Low Bacon, Jr., the son of the Ambassador to France and the formidable Martha Bacon.

Bacon had grown up in the picturesque Victorian mansion at No. 1 Park Avenue.  He graduated from Harvard University in June 1910 and, like his father, pursued a governmental career.  On February 24, 1911 his engagement to Cecilia Jacqueline May was announced.  That marriage, however, would not come to pass.

Instead, he married Virginia Murray on April 14, 1913.  The couple's country home was in Old Westbury, New York.  During the war he served in the Field Artillery, attained the rank of major and was awarded the Distinguished Service Medal.

Bacon's political career would eventually bring an end to the couple's residency in No. 162.  A delegate to the Republican National Convention in Chicago in 1920, he was then elected to the 86th Congress in 1922.

In 1921 the New York Tribune announced, "Princess Rospigliosi will occupy the city residence of Mr. and Mrs. Robert Low Bacon at 162 East Seventieth street, which she has taken for the winter."  Despite her vast wealth, hers was a fascinating and tragic story.

Born Mary Jennings Reid of New Orleans and Washington, DC, she had divorced her husband, F. H. Parkhurst, and relocated to Rome.  Parkhurst took custody of their two children.  The Times later explained "her remarkable beauty created a sensation, and it was not long before she was engaged to Prince Rospigliosi, head of that old historic house which bears his name."

The problem was that both were Roman Catholics.  The Church refused to marry a divorced woman and, in frustration, they wed in a civil ceremony.  Their unrelenting efforts to be married within the Church fell flat and the Princess was shunned by the Rospigliosi family and Roman society at large.

When a daughter was born, an application to the "English Blue Nuns for a competent nurse" was made.  But the Sisters were prohibited by the Cardinal to fill the position.  "The fury of the Prince and Princess...was Olympian," said The Times.  The couple learned their lesson and when a son was expected, they left Italy so he would be born "where the Church could not interfere, and where there were nurses in plenty."

Roman society was, perhaps, unprepared for the headstrong American.  On January 25, 1906 The New York Times reported "The extraordinary animosity of the Roman aristocracy, within and without the Vatican, against Princess Rospigliosi has again been revealed."  A benefit exhibition of "precious and curious objects" for the Working Man's Pension Fund had been staged in the Palazzo Rospigliosi.  The Princess loaned "some incomparable pearls given by Louis XIV to Mlle. Mancini, the celebrated niece of Cardinal Mazarin" for the exhibition.  She place a card with them that read "Pearls of the Princess Rospigliosi."

The committee, which desperately wanted to show the pearls but was loathe to recognize her title, replaced the card with one bearing the inscription "Pearls of the House of Rospigliosi."  The Princess responded by removing the pearls from the exhibition.  Not only had the committee lost a prized part of the show but, "had suddenly come into very bad odor with many fair-minded members of the American colony."

A year later the newspaper said "To those who are watching the game from the outside it is delightful to see the Princess enter a bazaar or the tea room of a hotel at the fashionable hour.  She has a genius for dress and she always has aimed at making it show off her glorious beauty, and when she walks into a public room and takes the most conspicuous place possible all the other women are non-existent.  They shrivel, while she seems to the manner born and invariably remains mistress of the situation."

But, admitted the article, "it must be dull for her to live with no friends and of society worth possessing--nothing but pretty clothes, her title, and her husband"

The Prince and Princess finally got their Catholic marriage, but under the worse of circumstances.  On September 22, 1913 a priest came to the Prince's deathbed to perform the ceremony.

Further tragedy followed when the Princess's daughter, Princess Francesa Rospigliosi died on June 9, 1920 of malaria at the family's country home near Paris.  Now her mourning mother came to the United States and leased the Bacon residence for the winter season.

The Bacons would not return to No. 162.   Following the Princess in the house was wealthy attorney and judge Thomas Day Thatcher and his wife, the former Eunice Booth Burall.  The influential lawyer would be appointed Solicitor General of the United States in 1930 by President Herbert Hoover.

But the Thatchers, too, would not lease the house more than a year.  In November 1922 the Hollister family sold No. 162 to Dr. Albert R. Lamb for $65,000, just over $500,000 today.   Born in 1881, Lamb had graduated from Yale in 1903 and the from Columbia University's College of Physicians and Surgeons in 1907.   The year he purchased the 70th Street house he was appointed Professor Clinical Medicine at Columbia.  He and his wife, Helen, had three daughters, Mary, Helen and Priscilla, and a son, Albert Richard, Jr.

The Lamb children would be raised in a lifestyle of privilege.  Mary attended the private Nightingale-Bamford School before going on to the Westover School in Middlebury Connecticut.  Her introduction to society was in 1930 and her wedding to William M. Thompson in St. Ann's Church in Kennebunkport, Maine on July 3, 1933 drew the attention of society columnists.

Priscilla was a senior at Vassar College when her parents announced her engagement to Harold Howe II on April 13, 1940.   Little Helen, who had been the flower girl in Mary's 1933 wedding, was married to Navy ensign Peter Hampden Freeman on June 10, 1947.  Their brother followed in their father's footsteps, becoming a doctor.

By now Lamb held the position of president of Columbia-Presbyterian Hospital's medical board since 1940.   Just before he retired in 1952 to devote himself to writing, he sold No. 162.  It was converted to two apartments--a triplex on the upper floors and a duplex in the basement and parlor levels..

Jacob Jancourtz purchased the property in 1951, taking the triplex for himself.   The other apartment was leased to Seymour Nathan and his wife.   While the conversion might have resulted in the loss of the stoop, as was most common, the exterior appearance of the residence was unchanged. 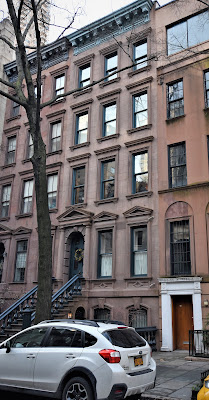 A year-long renovation begun in 2009 returned No. 162 to a single family home--its upscale status exactly what James Rowe envisioned when he jumped the gun more than 145 years ago.