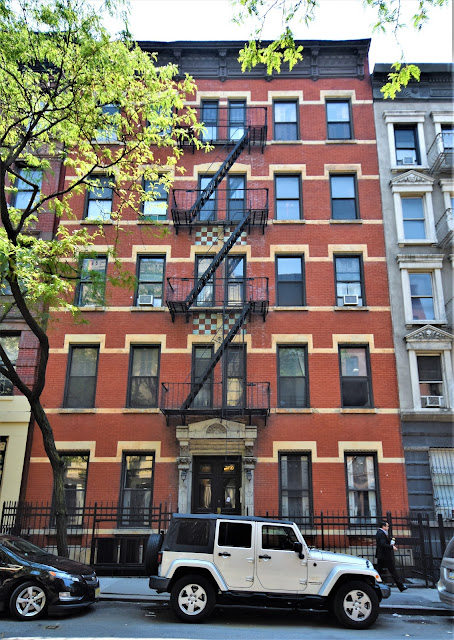 Ralph Samuel Townsend was just 27 years old when he received the commission to design a flat building for Joseph S. Pruden in 1881.  Townsend was the son of a builder, also named Ralph Townsend, and he had only recently opened his architectural office.

The project was an interesting one.  The Hell's Kitchen neighborhood where the site was located was notoriously crime-ridden and dangerous.  But developers (most significantly the Striker family which had owned much of the land since the 17th century) were currently replacing scores of dilapidated wooden "shanties" with brick tenements.

On September 11, 1880 Pruden had purchased the two two-story wooden houses at Nos. 360 and 362 West 51st Street.  He paid Elizabeth Solomon the equivalent of $216,000 today.  He widened the plot by purchasing three more feet of land, a "portion of two-story frame stable," as described in the title, on December 4.

Townsend filed the plans in February 1881.  Despite the gritty neighborhood, the five story flat building would be targeted to middle-class families, with just two apartments per floor--one on either side of the central stair hall.  The architect faced the five-story structure in red brick and trimmed it in beige sandstone.  Its neo-Grec design played out in prim symmetry and, originally, the lintels which held hands by thin bandcourses were adorned with incised carvings.

Townsend gave the facade a splash of color with Queen Anne style terra cotta tiles at the second and third floors.  A cast iron cornice ran along the roofline.  The completed structure cost Pruden $28,000--a surprising $645,000 in today's dollars given the marginal neighborhood.

While some of their neighbors may have led lives of crime, the residents of No. 360 seem to have been law-abiding and respectable.  John J. Finn, for instance, was appointed a City Surveyor on November 14, 1899.   Finn was well-known by now throughout the city.

When a young man he enlisted in Company K, 11th New York Volunteers on April 19, 1861 "in response to President Lincoln's first call for troops," according to The Evening World.  He participated in the battles of Bull Run, McCloud's Mill, Blackburn's Ford and Brick House.  He was also involved in the defense of Newport News against the Confederate fleet, headed by the ironclad Merrimac.

Following the war he returned to the printing business, while also giving much time to the volunteer fire department.   He was a force within organized labor, a fact that most likely resulted in his City Surveyor position.  When he died on November 18, 1900 The Evening World called him "one of the best known of the men identified with the active life of New York during the past forty years."

Another tenant visible in the labor movement was William J. Matthews.  He lived here in 1901 when he was elected to the Citizens' Union Party.

It was about that time that Dr Warren Chamberlain McFarland and his wife moved in.   The physician was financially comfortable enough to be one of the original founders of the Sanitary Engineering Company in 1904; but he was perhaps best known for being related to Abby and Daniel McFarland.

Daniel, Dr. McFarland's uncle, had duped Abby Sage into marrying him in 1857 when she was just 19 years old.  Abby was well educated and an aspiring writer.  Daniel, who was 38, told her he was a well-to-do, prominent lawyer.  He was not.  Instead he was a violent drunk who immediately began pawning Abby's jewelry.

It came to a head in 1867 when Abby left McFarland.  She took a room on West Washington Place, as did Albert Deane Richardson, who had lived in the same boarding house as the McFarlands.   Abby was seen publicly with Richardson and rumors of their romantic involvement infuriated McFarland.  The month after Abby obtained a divorced on the grounds of "drunkenness, extreme cruelty, and failure to support a wife," Daniel McFarland walked into Richardon's office on November 25, 1869 and shot him.

Richardson lingered, mortally wounded, as Abby rushed to his side.  On November 30 the Rev. Henry Ward Beecher visited his deathbed where he married the couple.  Richardson died two days later.

Dr. McFarland was called to the witness stand at least twice during the lurid, five-week long trial proceedings.  His testimonies were published across the country.  While there was no question that Daniel McFarland had murdered Richardson, the Victorian press greatly focused on Abby's indiscretions.

On April 15, 1870 the Memphis Daily Appeal reported on Dr. McFarland's testimony.  He said that he had gone to the West Washington Place boarding house where his aunt "occupied a room connecting with one occupied by Richardson," and that he had "remonstrated with her."  He testified that in another conversation "she said she only wanted money to make her an elegant woman" and "all she wanted was money to gather around her the literary elite of New York."

Newspapers nationwide, religious leaders and society at large blamed Abby's adultery for driving her husband mad.   The jury deliberated for less than two hours before proclaiming Daniel McFarland not guilty.

The first decades of the 20th century continued to see the tenant list filled with mostly Irish names.  Like John J. Finn and William Matthews, Joseph H. Byrne was involved in the labor movement and interested in politics.  He was here in 1908 when he was elected Vice President of the Independence League Party.

Three decades after its completion, the estate of Joseph S. Pruden sold the building on May 11, 1912.  The change in ownership did not affect its operation and No. 360 continued to be home to hard-working, middle class families.

In 1925 Harry Moore narrowly escaped death in while performing his work as a longshoreman.  On February 27 Moore was the foreman of the gang of eight men loading freight onto the steamer Lenape at the Hudson River Pier 36.  He was on deck, directing the men as barrels of chemicals were lowered on a sling to the hold.

Suddenly he heard his men "coughing and calling for aid," and smelled noxious fumes rising from the cargo hold.  He called seven other laborers and led them below deck.  By now the shouts of the men had become moans.

Somehow one of the drums of deadly cyanide acid had broken, releasing deadly gases into the compartment.  Moore and the other men tried valiantly to pull the men out, but they too were quickly overcome.  Another gang was sent in and, according to The New York Times the following day, "After some work they succeeded in bringing all the stricken men to the deck."  Harry Moore one of the two most seriously affected.  He and another man were taken to St. Vincent's Hospital where "hope was held out for their recovery."

Another tenant to experience a narrow escape was 23-year old James Lee who lived here during the Depression years.  On September 5, 1934 he and six friends, including Arnold Kramer, crammed into Kramer's automobile of Arnold Kramer and headed off on a drive in the country.   The outing would end in tragedy.

In Port Chester, New York, the car was involved in a horrific crash with a truck driven by Fred Bosies.  All six of the passengers were injured; Lee suffering a broken leg and cut.  But Arnold Kramer did not survive the accident.  Bosies was arrested on a technical charge of homicide.

The Hell's Kitchen neighborhood still retained its tainted reputation at mid-century.  But the residents of No. 360 brought no bad press to the address.  Not, that is, until January 4, 1952.

Eugene Conden was 21 years old when, "swaggering and cursing," according to police, he entered the Economy Sandwich Shop on Seventh Avenue between 40th and 41st Street at around 4:30 in the morning.  He pulled out a pistol and ordered the customers, the night manager and the counterman to line up against the wall.   Just then 62-year old Sam Klein strode in and, unaware of what was happening, called to the kitchen "Give me a Western on white."

Conden turned to Klein and said "This is a stick-up."

The man was incredulous.  "Are you kidding?"

To prove that he was not kidding, Conden shot him in the foot and demanded his wallet.  When Klein did not move fast enough, Conden fired another shot at his foot.  He then gathered the $41.50 in the cash register and ran out.

Klein was removed to St. Clare's Hospital.  And that's where karma took over.

Patrolman John D. Ritchie came across a man sprawled on the sidewalk at 46th Street and Broadway and, unable to arouse the apparent drunk, called an ambulance.   Ritchie accompanied him to St. Clare's Hospital where he was placed in the bed next to Sam Klein.

Klein was answering the questions of three detectives when his attention was suddenly drawn to the bed next to him.  He heard the patient mumble to Officer Ritchie, "I shot a man in the foot."  It took Ritchie and the three detectives to restrain Klein when he realized that his assailant was feet away from him.   Conden was arrested on charges of robbery and illegal possession of a weapon.


Surprisingly, the spacious apartments were never broken up.  They retain their 1882 layouts, with understandable tweaks for 21st century residents.  And other than the regrettable loss of the 19th century incised decorations, Townsend's handsome flat building--constructed when development in Hell's Kitchen was a risky gamble--is essentially intact.