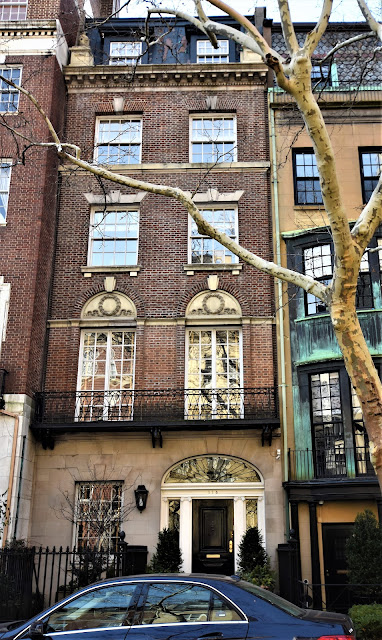 Theodore W. Luling, born in 1875, was admitted to the banking firm of the Fifth Avenue Trust Co. in 1898.  He was, as well, a director in the large dry goods firm James H. Dunham & Co.   John H. Dunham was the father of Luling's wife, Grace Louise Lathrop Dunham.  The couple were living with the Dunhams in their comfortable rowhouse at No. 37 East 36th Street at the time.

It was most likely the arrival of their first child, Rosamund Elena, on November 23, 1899, that prompted the couple's search for a new home.  In June 1900 they purchased the old three-story brownstone house at No. 118 East 70th Street from the estate of David Babcock.

The block between Lexington and Park Avenues had recently seen an influx of moneyed families; several of whom transformed the outdated Victorian houses into modern, upscale residences.  The price the Lulings paid for the property, about $660,000 in today's dollars, reflects the growing exclusivity of the block.   As was common at the time, the title was put in Grace's name.

The Lulings hired the architectural team of Trowbridge & Livingston to remodel the house--adding a floor, and expanding the building to the front and rear.  The extensive renovations would cause a standoff of sorts between the architects and the Department of Buildings.

According to the New-York Tribune, "The plans for the improvements were submitted to the Department, and as they called for the practical rebuilding of the structure the architect was told to file plans for a new building."   On September 15 the architects submitted the revised plans--now calling for a completely new structure.

It may be that the Lulings were reticent to advertise what they were paying for what had become an extremely expensive project; but for whatever reason when the Department official asked the Trowbridge & Livingston associate to insert the construction costs, which had been left blank, he refused.  The Tribune reported "He refused to fill in the cost at first, but on being told that his plans would otherwise be rejected he placed the cost at $100."  To this day the construction cost on record for No. 118 East 70th Street is a mere $100.

The 20-foot wide neo-Federal style residence was completed in 1901.  With no stoop hogging real estate, the architects could have pulled the facade to the property line, thereby increasing interior floor space.   Instead they used the former entrance to the basement as a fenced areaway which contributed to the stately tone of the house.

The entrance of the five-story residence sat with a planar limestone base.  Leaded sidelights flanking the single door and an over-sized fanlight admitted sunlight into the foyer.  A full-width iron balcony fronted the pair of French doors at the second floor, the tympana of which were decorated with delicate carved wreaths and ribbons.  Burned headers of the Flemish bond brickwork, splayed lintels and double keystones added to the colonial flavor of the style.  The top floor took the form of a steep mansard above a stone cornice.

It appears that one of Grace's maids came up with a clever way of seeing the world; or at least of getting free passage on a liner.  On June 2, 1902 her advertisement appeared in the New-York Tribune:

If Miss Sullivan was unsuccessful in finding children to tend to on the Atlantic, she would have had a newborn to take care of on 70th Street.  Theodore Dunham Luling was born on October 30, 1902.

Four months later the Lulings hired architect H. Davis Ives to design a two-story addition in the rear.  This time the architect and the Department of Buildings did not butt heads.  Ives filled in the construction costs at $5,000--around $145,000 today.

The Lulings had a summer estate in Ridgefield, Connecticut when the 70th Street house was constructed.  By 1905 they had a "villa" in Stockbridge, Massachusetts.  And while they continued to maintain that home at least through 1908, on August 6, 1905 The New York Times reported that they were building in Lenox, as well.

"Theodore W. Luling of New York, who last season bought a fine building site on the Cone estate, is preparing to build a costly Summer residence.  Plans have already been prepared.  Mr. and Mrs. Luling are in Stockbridge for the Summer."

Interestingly, while Theodore and Grace were busy with  summer estates and garden parties, they appear to have been highly interested in the education of black children, as well.  At the time both were writing back and forth with Booker T. Washington.  While Washington enjoyed the patronage of several Manhattan philanthropists--John D. Rockefeller, Andrew Carnegie, and Collis Huntington among them--the relationship between him and the Lulings appears have been personal.

Following the formation of the Union of South Africa, E. B. Sargant was appointed South African Commissioner of Education by Lord Milner.  Charged with developing a "system of Public School education among the natives," he turned to Grace Luling to help in connecting with Washington for advice.  Grace enclosed a list of Sargant's questions in a letter to the author and educator, which he answered.   On February 12, 1909 she followed up, sending Washington a letter saying in part that "Mr. Sargant has successfully accomplished this work."

The Lulings sold No. 118 in September 1910 to Francis Leonard Kellogg and his wife, the former Emilie Baker.  The couple paid the equivalent of $1.3 million for the house.

The Kelloggs had three sons and a daughter; Alexander, John, F. Leonard Jr., and Virginia.  F. Leonard Kellogg had graduated from Princeton University in 1894 as an electrical engineer.  By now he managed the Electric Storage Battery Company, and was a member of the prestigious Ivy Club of Princeton, the Union Club and the University Club.

Emilie was an accomplished artist, having studied at the Art Students' League as a teenager.  She now immersed herself in charitable causes, like the vaudeville entertainment at Sherry's in December 1912 for the benefit of the Convalescent Home for Babies.

The Sun reported that one act, which involved children, also relied on Emilie's artistic bent.  "A series of Dickens tableaux in which young people will pose after illustrations of Cruikshank will be given under the direction of Mrs. F. Leonard Kellogg and will be accompanied by English glee songs."

On August 22, 1916 the funeral of Francis's widowed mother, Josephine Kellogg, was held in the house.  Five years later, in November 1921, it was the scene of the funeral of Emilie's father, William Edgar Baker.

Much happier events would come as the children neared adulthood.  The winter season of 1927 saw Virginia's debutante entertainments, the first of which was "a large luncheon," as described in The New York Times on December 9, at the Savoy-Plaza.  The extensive guest list inluded the daughters of some of Manhattan's most prominent families.

Virginia's education reflected her privileged upbringing.  She had graduated from the exclusive Spence School, and later studied at the Miss Sheldon and Miss Nixon's School in Florence, Italy.  Like most debutantes, she was a member of the Junior League.

On June 15, 1928 the house was the scene of a double wedding.  Virginia was a bridesmaid for her cousins Josephine Leonard Kellogg Reeve and Imogen Jewell Kellogg Reeve.  The engagements of sisters had been announced just weeks apart and now they were married together in the Kellogg house.

F. Leonard Kellogg retired in 1929 after two decades with Electric Storage Battery Company.  Two years later, on New Year's Day 1931, he and Emilie announced Virginia's engagement to William Kemble.  The New York Times noted "Both Miss Kellogg and her fiancé come of distinguished ancestry," reminding readers that her great-grandfather was Cornelius Baker, the philanthropist and founder of New York University.

Virginia's wedding took place in Bedford Village, New York, where the family maintained their country home.  It was there on December 20, 1941 that F. Leonard Kellogg died at the age of 74.

Francis L. Kellogg, Jr. would go on to an illustrious career.  He would serve as special assistant to two Secretaries of State, William P. Rogers and Henry A. Kissinger, earning him the title of Ambassador.  He was also chairman of the Executive Committee of the United Nations High Commissioner for Refugees and head of the United States Delegation to the Intergovernmental Committee for European Migration in Geneva.

Emlie Kellogg sold the 70th Street house in the mid-1940's.  It was home to Mrs. Charlotte Coursay Kulka in 1948.   She was the victim of 38-year old George Feld, called the "Celluloid Burglar" by newspapers because he favored motion picture actresses as his targets.   He was arrested after breaking into the apartment of actress, comedienne and actress Gertrude Neison on October 16 that year and making off with $10,000 worth of jewelry.   The grand jury charged him at the same time with burglarizing the homes of actress Gene Tierney, Kay Long, and Charlotte Coursay Kulka.

While many of the mansions on the 70th Street block were converted to apartments in latter part of the 20th century, No. 118 remained a private house.  It was purchased by the multi-talented director, screen writer, actor and musician Woody Allen in 2005 for $22.62 million. 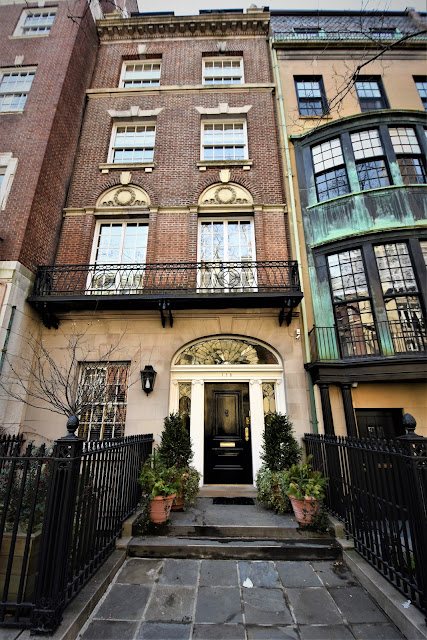 Outwardly, the home which the Theodore and Grace Luling never really intended to build essentially unchanged.

photographs by the author
Posted by Tom Miller at 9:38 PM