Shortly following the end of the Civil War the block of 54th Street, between Fifth and Madison Avenues became lined with high-stoop brownstone rowhouses  Among the residents was the Dennis W. Buckley family, who lived in the 23-foot wide home at No. 18.

Buckley was a well-to-do real estate operator.  He and his wife, Ann, had three daughters (Ellen, Lizzie and Cornelia) and two sons (Mortimer and Richard).  Residual anti-Southern sentiments did not seem to blemish the wedding of daughter Ellen to Texan Patrick Henry Lydon on September 10, 1866.  Perhaps Lydon's embracing New York City as his adopted home helped his reputation.

While Ellen had a church wedding, her youngest sister, Lizzie, was married in the 54th Street house three years later.  It is probable that she had met her new husband, Cornelius J. Farley, through her father's business dealings.  He  was the son of the wealthy builder and developer Terence Farley.

The last of the daughters' weddings was on December 9, 1873 when Cornelia married W. Thomas Boyle.  Their marriage would be tragically short.

Cornelia's husband died on January 23, 1875 at the age of 32.  His funeral was held in the same parlor of the Buckley house where the couple had been married just over a year earlier.    The family would hold another funeral seven months later following Dennis's death in the house on August 17.

By now Richard W. Buckley had gone into his father's trade.  But his was an all-encompassing operation and he acted as developer, builder and architect.   He and his wife, Josephine, lived in the 54th Street house with his widowed mother and he ran his business from the address.

Ziegler was born in Manhattan on October 30, 1857.  The son of cabinet maker Jacob Ziegler and his wife, the former Doretta Steinway.  She was the daughter of Henry E. Steinway, founder of Steinway & Sons.   After graduation from the Mount Pleasant Military Academy in Ossining, New York, he went into his father's business on Bleecker Street.

But Henry's uncles, William and C. F. Theodore Steinway, recognized the remarkable quality of his workmanship and lured him away to their piano-making factory.  By the time he purchased the Buckley house, he held a highly-important position within the Steinway firm.

Henry had married a cousin, Albertine Vogel, on October 12, 1881.   The following year he was elected a trustee and director of Steinway & Sons; and in 1883 he became president of another Steinway venture, the Hunters Point Railroad.  The couple had three children.

The purchase of the house came not long after Henry inherited a quarter of his uncle Theodore's interest in the Steinway firm in 1889.   His contribution to the success of Steinway & Sons did not go unnoticed even outside the firm.  On October 9, 1892 The Sun described him as having "a high order of inventive genius" and said he "does much to keep the Steinway piano in the van of the march of improvement.  His scientific knowledge of piano construction in all its complicated details is second to none in the trade."

At the turn of the century the Ziegler house was decidedly outdated.  Half a block away, on Fifth Avenue, the Vanderbilt family's mansions lined up between 51st and 57th Streets to form what New Yorkers called Vanderbilt Row.  In 1901 Henry and Albertine took steps to bring their home into fashion.

On June 14 the architectural firm of Palmer & Hornbostel filed plans for massive renovations.  The $15,000 do-over not only enlarged the house and remodeled the interiors, but gave it a totally new and modern personality.

Lowering the stoop had enabled the architects to pull the facade of the house several feet forward, adding to living space inside.  An extension to the rear further enlarged the house.  The shortened stoop gave the impression of a modern, American basement residence; however the floor levels inside went unchanged as did the walk-down English basement.  Instead of climbing the high stoop outside, visitors now went up a half-story staircase in the foyer.

Palmer & Hornbostel faced the house in red brick and trimmed it in white marble.  The Beaux Arts design featured a robustly framed circular window above the double-doored entrance, a full-width balcony at the second floor, and another fronting the dormered mansard.  There were now 15 rooms plus a surprising 5 bathrooms. 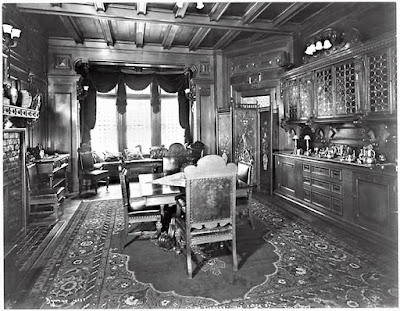 Renovations were completed just in time for daughter Eleanor's wedding to James A. Hill.  The pair was married in the Church of the Heavenley Rest in May 1902.  Heartbreakingly, two months later on July 1, it was the scene of her funeral.  The New-York Tribune reported "Her illness was brief, and her death came as a great shock."

The Zieglers remained in the house until the spring of 1920 when they sold it to Martin Beck.  On May 8 the Real Estate Record & Builders' Guide reported "Martin Beck, president of the Orpheum Circuit of Theatres, bought 18 East 54th street...as a wedding gift for his daughter Helen, who was recently married to James Howard Hoffman."

It could be that the newlyweds were not interested in living in what was, by now, a highly commercial neighborhood.  But for whatever reason, on December 9, 1922 the Record & Guide reported that Beck had sold the house.

It became home to the Board of Missions of the Presbyterian Church of the United States.  The group remained in the building for decades, until selling it to real estate operator Hugh K. McGovern.  He converted it to office space, selling it in August 1951 to S. M. Frank & Co. for its offices and showrooms.  Manufacturers of "Medico filter pipes and cigarette holders and Demuth pipes," the firm announced it "plans extensive alterations before occupying the building."

As the last quarter of the 20th century neared, the 54th Street block bore little resemblance to the upscale residential neighborhood it had been in the 1860's through the World War I era.  The venerable Buckley-Ziegler house was demolished amid a flurry of development on the block in 1970.  Today the site is part of an indoor parking lot.