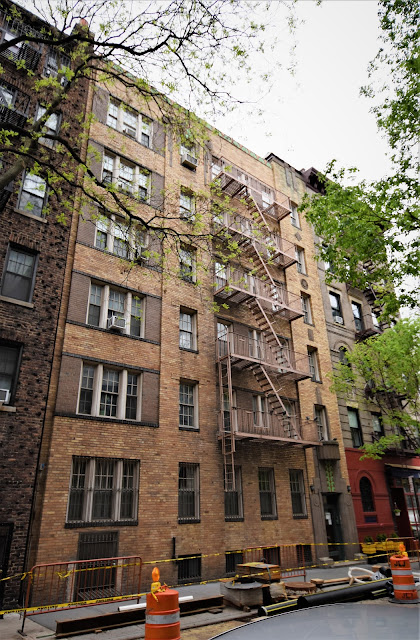 Already the epicenter of Manhattan's artistic community, in the mid-1920s Greenwich Village gained additional notice for its off-Broadway theaters.  In 1925 two Federal-style houses at Nos. 22 and 24 Grove Street were demolished by the Opera Players, Inc.  They commissioned architect Harrison C. Wiseman to design their new 290-seat theater.

Upon its opening, Theatre Magazine reported "The name of the new house is the Grove Street Theatre, and it is the third of a triumvirate of intimate theatres erected in recent years in Greenwich Village, the others being of course the Greenwich Village Theatre and the Cherry Lane Theatre."

The ambitious endeavor would not survive for long.  Many theater-goers were no doubt shocked when, on January 10, 1929 The New York Times reported "The Grove Street Theatre, a modern three-story structure erected about three years ago as an intimate playhouse, is to be replaced by a six-story apartment house."

The property had been sold to Asher Osterman, who announced the replacement structure would contain 42 "studio suites."   The developer hired the 32-year old architect Hyman Isaac Feldman to design the structure.

Feldman, who went professionally by his initials, had started his practice just eight years earlier.  He would soon become well-known for his Art Deco apartment houses along the Grand Concourse in the Bronx and similar buildings in Brooklyn.  Before his death in 1981 he would design more than 2,500 metropolitan area apartment buildings.

The Grove Street Theatre was not demolished until April 1930; the long delay possibly due in part to the onslaught of the Great Depression.  The financial disaster was perhaps also responsible for the scaled-back decoration of Nos. 22-24 Grove Street.

The completed six-story building was, overall, nearly spartan.  Faced in sandy variegated brick, Feldman relied for the most part on contrasting brick bandcourses and panels to embellish the facade.  But he let loose his Art Deco passion at the entrance and on the top floor.

The single-door entrance sat within in a lush terra cotta stylized waterfall.  Directly above the door a bright green and russet fountain or plant rose to a charming canopy in the form of a Juliette balcony.   A colorful band of fans ran along the roof line, and a striking Art Deco ornament of scrolls and flowers decorated the sixth floor. 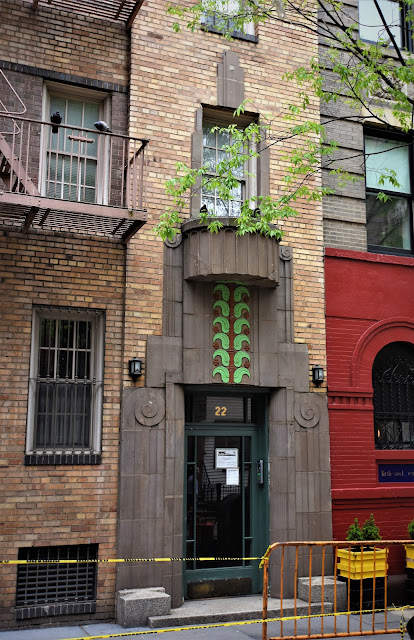 The building filled with middle-class professionals like retired advertising executive Francis W. Hargitt who was here in the late 1930s and early '40s, and author George W. Seaton.

The writer was best known for his travel books, like his 1938 Let's Go to the West Indies, his 1939 What to See and Do in Scandinavia, and What to See and Do in New England, published in 1940.  When World War II broke out in Europe, he was hired by the Office of War Information.  He was still living in his Grove Street apartment when he died at the age of 56 in August 1944.

In the building at about this time was the young lawyer Emanuel Popolizio.  He took on a high-profile case in June 1946 that made newspapers nationwide.  His client, Henry Suckow was 24-years old.  On June 8 he and two other army vets went on what The New York Times deemed a "rampage of violence."

They murdered 20-year old Jack Hylands then raped his 18-year old female companion in Central Park.  The trio then headed to Queens where they spotted 24-year old Antonio Marchisella sitting in the car of his friend, Charles Duff on Shore Road.  They fatally shot Marchisella, pushed his body into the curb, then drove off with Duff before beating him and pushing him out of his car.  Ironically, like themselves their victims had served in the military during the war.

Little-known attorney then, Emanuel Popolizio would become a familiar name when Mayor Ed Koch appointed him head of the New York City Housing Authority in January 1986.  He held the position through November 1990. 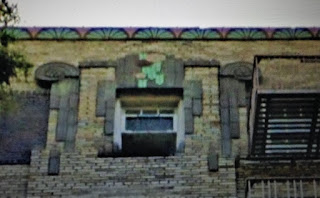 In the meantime, life at No. 22-24 Grove Street continued relatively quietly.  But, of course, there were exceptions.  Security in apartment buildings at mid-century was lax at best.  When Marian Sawyer came home on a cold Thursday night in January 1954, she was followed by a young man who threatened her in the hallway with a knife.  He took $21 from the terrified young woman.

Her attacker, Adam Perelman, was responsible for several other similar robberies.  He was arrested a few days later.  Shockingly, the 17-year old was the son of the famous humorist and screen-writer S. J. Perelman.

Unlike many other apartment buildings of its size, however, such incidents were rare.   Residents came and went quietly for the next half century, drawing little attention.  And through it all H. I. Feldman's striking Art Deco design survived unchanged--a delightful addition to the architectural grab bag along the block.