In 1868 the 62nd Street block between Lexington and Third Avenues saw a flurry of construction.  Formerly open and rural, the plots were sold to builders and contractors that year and rows of brownstone-fronted rowhouses soon followed.  One house, No. 143, stood out--not because of any architectural significance, but because of its unusual proportions.  At just 12.5 feet wide, it was a nearly half as wide as the common townhouse.

Built by Anna and Warren P. Crandall, who owned several other properties in the neighborhood, the skinny house seems to have been a dollhouse version of its neighbors.  They described it in an advertisement on April 16, 1871.  "A nice little brown stone house, 143 East Sixty-second street, near Lexington avenue...Modern improvements; rent $1,400."  The rent would be equal to about $2,400 a month today.

Later that year, in October, the Crandalls sold several parcels to real estate operator John Murphy , including No. 143.  By the 1890s it was home to Charles H. Liebert and his wife, Charlotte.  The German-born attorney was active in the German community, taking a box at the annual German Charity Ball in the Waldorf-Astoria, for example; and was highly involved in the New York Athletic Club.

The Lieberts moved down the block to No. 234 East 62nd Street at around the turn of the century.  Their former house became the home and office of Dr. John Slocum.   He was a fixture on the 62nd Street block for more than two decades, finally selling the house around 1928 to another physician and neighbor, Dr. Robert H. Fowler.

Fowler, whose summer estate was in Syosset, Long Island, lived and operated his "private hospital" steps away at No. 153.  His purchase was purely an investment and he remodeled the old house by removing the stoop and extending the front forward to the property line.  His architect gave the old house a Mediterranean make-over with a diapered brick facade and slate mansard.

On May 25, 1929 The New York Times noted that "Romeyn Park Benjamin leased from Dr. Robert H. Fowler the four-story American basement dwelling."  Benjamin's sister, Dorothy, was the widow of famed operatic tenor, Enrico Caruso.  He was the general manager of her newly-formed business endeavor, the Dorothy Caruso Reproducing Studio.

The following week the newspaper reported "Without the fanfare of a formal opening or any activity which would distinguish her studio from a normal place of business, Mrs. Enrico Caruso...made her debut yesterday as a business woman."

Although busy "arranging the rooms, fretting over workmen's delay in making installations" and other preparations, Dorothy paused to answer the reporter's questions.  She flatly admitted she "was not in the business for fun, but for money."  Hers was a remarkable venture--making personal recordings.

"Mrs. Caruso's business is the making of individual phonograph records, which instantly reproduce and perpetuate on aluminum anything from a greeting to a sales letter, as she explained it," said the article.  Dorothy was careful to distinguish her services from those which had made her husband's music available in families' living rooms.


"This is the first time my name has ever been connected with any business.  Our business will not compete with the phonograph record companies.  We shall make only personal records for customers."

The ground floor contained a reception area and the two recording studios.  The Times said "The walls of the studios are hung with heavy stuffs which serve the double purpose of decoration and sound absorption."  On the second floor were individual rooms where customers could hear the finished products on phonographs before approving them.

Dorothy seemed determined to make it on her own.  The only reminder of her famous husband was a life-size bronze bust of the tenor just inside the entrance.

Later that year The American Exporter explained the process saying "A blank Speak-O-Phone record is placed on the metal disk of specially processed aluminum, on which a personal record can be made in a few minutes."  The magazine promised that it was "possible for anyone to make personal phonograph records...for no more than the cost of an ordinary record."

Dorothy Caruso's ambitious venture did not last especially long; at least not on East 62nd Street.  It was soon the studio of artist and photographer George M. Kessler.   Kessler's photography had been well-received over the years, being exhibited as early as 1921.  But it was possibly the Great Depression that ruined his business.  On August 15, 1934 he filed for bankruptcy.

The next change to No. 143 came in May 1950 when it was purchased by real estate operator Michael Charles Berg, who went professionally by his initials, for his offices.  Berg commissioned Samuel A. Hertz to update the building.  While the architect renovated the interior spaces for Berg's offices, he did little to the striking exterior other than replacing a doorway with a wide shop window.


In reporting on the renovations on December 10, 1950, The New York Times remarked on the building's extreme narrowness.  "In these days of tall buildings which take up whole blocks, the four-story brick town house at 143 East Sixty-second Street offers a striking contrast because of the tiny plot it occupies."  Reminding readers that it "was occupied for more than a quarter of a century by Dr. John Slocum as his residence and office," the newspaper said "It stands as one of the narrowest structures in the borough."

Berg's $35,000 in renovations (more in the neighborhood of $350,000 today), resulted in a store at ground level, Berg's offices on the second floor, and apartments above.

Berg was well-known for his remodeling and reconditioning of vintage houses, starting around 1925; but he had a much more colorful past.  He was celebrated world-wide as a trick cyclist.

While growing up on the Lower East Side, he loved his bicycle.  In 1900, at the age of 14, he joined a circus and, according to The New York Times decades later, "soon developed sufficient skill to establish his own act, which toured the world and gave command performances before royalty."

His nephew, Leo Feinberg explained "With his partner on his shoulders, he would race down a ladder on a unicycle, straight toward the audience.  As a rule, the spectators, certain that the pair would crash onto them, would attempt to scatter."  But at the very last second, Berg would turn sharply away.  Berg and his partner, Al Berman, took the cycling act all over the globe with the Keith-Orpheum vaudeville group.

Berg's business dealings at No. 143 would be far less thrilling, but most likely more financially rewarding.

M. C. Berg sold the building to Mildred Bernstein in February 1959 "for investment."  She leased the store to Ted and Nancy Price, who had run their custom furniture store, the Barn at Ben Robyn, in Huntington, Long Island.  But the winter of 1958 had been severe and prompted the couple to reconsider their remote location.   They opened in the 62nd Street location in September.

The Prices marketed their "furniture, furnishings and gifts" as "Jamaican Originals;" but it was a misleading description.  While the reproduction furniture was crafted in the Caribbean using Jamaican mahogany, it was in fact detailed reproductions of American and European 18th century designs.

On September 26, 1959 The New York Times remarked on several of the pieces displayed, including a $1,200 highboy and a $450 lowboy copied originals in museums.  "An end table with a bombe front, just high enough to nestle under the arm of a sofa is $350.  A miniature chest, copied from an old Chippendale spice cabinet, is eight inches high and ten inches long.  It is lined in gay printed wallpaper and has four little drawers."

The Barn at Ben Robyn remained in the space until 1965 when it became home to Tender Buttons.  The unique shop had begun the year before when Diana Epstein, an editor for Funk & Wagnall's Encyclopedia, purchased a defunct button store.   An antique restorer, Millicent Saffro, dropped in to buy a button and was fascinated by the still disorganized hoard.  The two women became partners.

Epstein and Safro massed an inventory of millions of vintage buttons.  Together they wrote Buttons, published in 1991, and Epstein published A Collector's Guide to Buttons and The Button Book.

Diana Epstein died in 1998, but more than half a century after opening the shop here, Millicent Saffro continues selling buttons--some rare, some not, but all mesmerizing for the button crowd. 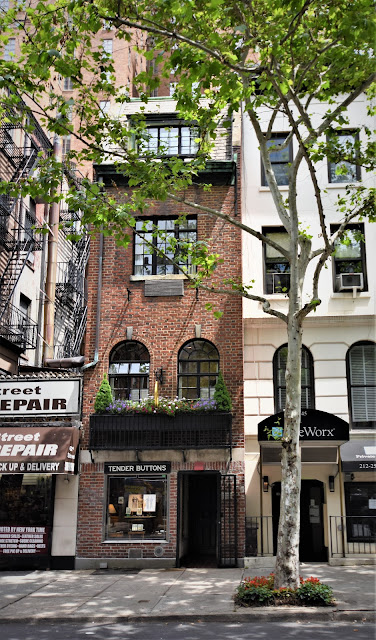 After nearly a century and a half of colorful history, the skinny little house is a charming presence steps away from the clamor of Lexington Avenue.