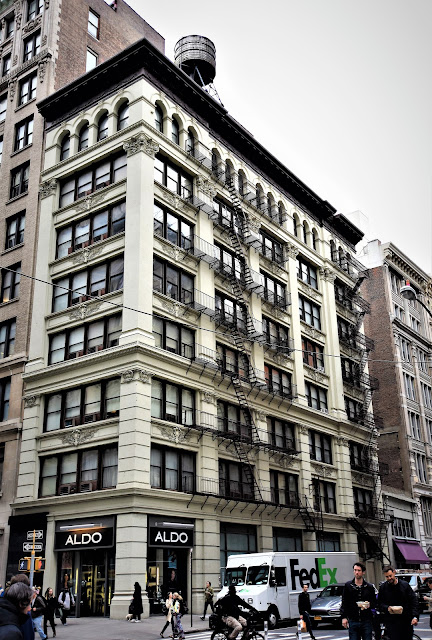 Around May 1, 1893 Otto L. Braumuller, president of the Braumuller Piano Company, left the four-story house at the northeast corner of Fifth Avenue and 17th Street for good.  His wife, Luetta E. Braumuller, whom he had married in August 1876, remained behind.

Perhaps even more well known than her husband, The Evening World called her "an artist of considerable reputation."  The editor of China Decorator, she had been awarded several medals at the Chicago World's Exposition where she also gave an address.  The newspaper described her as "about thirty-five years old, dresses stylishly and wears glasses.  She has sharp, clearly cut features."

Luetta held art classes in the Fifth Avenue house.  Trouble ensued after an 18-year old friend of her son, W. Earle Holcombe, signed up.  It would seem that art was not the only lessons the boy received.

Braumuller sued her for divorced, claiming she had become "too friendly" with the teen.  Proper Victorian women were no doubt shocked when they read account of the hearing in The Evening World on January 22, 1894.  Two of the witnesses were Braumiller servants, who testified "to having found Holcombe's nightclothes in Mrs. Braumuller's room."

At the time of the divorce proceedings the neighborhood around No. 97 Fifth Avenue had almost completely changed from one of private mansions to commercial buildings.  The Braumuller residence would soon become another victim.

Real estate operator Henry Corn was highly responsible for the transformation of lower Fifth Avenue.  Working most often with architect Robert Maynicke, he replaced one mansion after another with modern loft buildings.  They teamed up again for No. 97 Fifth Avenue.

Construction on the building began in 1897 and was completed the following year.   The eight-story neo-Renaissance structure was a typical Corn-Maynicke collaboration.   Clad in brick with terra cotta trim, it was stately and handsome, but not exceptional.  Decorative elements like the striking palm-backed cartouches that adorned the spandrels between each floor, were signature Maynicke touches.

The neighborhood was home by now to several piano and organ firms--the Fischer Piano Company, Chickering Piano, and Decker Piano among them.  Sohmer Piano Company would soon occupy another Corn-Maynicke building at No. 170 Fifth Avenue which had risen simultaneously with No. 97.  Following the trend, the Estey & Saxe company, Vermont-based makers of pianos and organs, moved into the ground floor of No. 97 Fifth Avenue.

In May 1898, there were just two tenants.  Both Estey & Saxe and B. L. Solomon's Sons had signed 10-year leases.  B. L. Solomon's Sons dealt in "artistic furniture" and "antique coverings" (upholstery fabrics).   It offered, for instance, a "full line of railroad plushes" in its new "spacious and elegant salesrooms."

A vice-president of Estey was Levi Knight Fuller, a former governor of Vermont.  When he died not long after the firm moved into No. 97 Fifth Avenue, he left a unique collection to the firm.  On March 25, 1899 The New York Times reported "Collectors have all sorts of fads, but one of the queerest to the average man was that of the late Gov. Fuller of Vermont.  His hobby was tuning forks."

The 307-piece collection was put on exhibition in the Estey showrooms.  Included was an 18th century example by John Shore, who had invented the tuning fork in 1711; and one which had been owned by George Frideric Handel and reportedly used "when he conducted his oratorio, 'The Messiah,' in 1751."   There was also a "delicate little fork" used by opera star Adelina Patti during her 1882 American concert tour.  A standout was the two-foot long fork used to tuning the lowest notes of the keyboard.

Customers to the Estey showrooms browsed among pianos and reed organs--sometimes called "parlor organs."  About the size of an upright piano, the reed organs produced music when the operator pumped foot pedals which filled an internal bellows.   They were highly popular not only for domestic use, but for small churches.

At the turn of the century, however, the parlor organ's popularity began to wane.  So the firm turned to manufacturing pipe organs as well.  Well-known organ builder William E. Haskell was recruited from Philadelphia to head that operation.

An advertisement in The New Music Review in March 1905 touted the new instruments.  It promised that the "Estey Pipe Organ insures against cheap construction--inside and out, annoying breakdowns, continual repairs...old-fashioned ideas, slot, stiff or noisy action [and] untried experiments."

By now another upholstery firm had moved into the Building.  Thomas F. Gurray was here by 1901.  When Estey moved its showrooms to No. 7 West 29th Street in 1907, the store became home to Flatau, Olesheimeer & Co., "dealers in laces and veilings."   Ramer & Lissauer, makers of "neckwear, silks, satins, linings, etc.," moved into the sixth floor around the same time.

The two firms would remain in the building for many years.  They were emblematic of the fabrics and apparel tenants that would continue to occupy it.   The other tenant in 1919, for instance, were Benedick & Bodner, makers of "reefers" (men's jackets); Liondale Shirt Company (which would be a major producer of U.S. Army uniforms shirts during World War II); and R. Goldstein & H. Israel.  One non-apparel firm at the time was Wolfson Brothers Umbrella Company, on the fourth floor.

A new tenant in 1922 was Brandon Magnus Company, makers of men's handkerchiefs.  Both Liondale Shirt Company and Ramer & Lissauer were still here.  In June 1922 Ramer & Lissauer touted its new ties, still termed "cravats" at the time.  The OxWear Cravats were "guaranteed to wear 3 months!"

The following year the firm experienced a disturbing incident.  Public accountant Harry A. Cohen was hired to audit Ramer & Lissauer's books.  Rather astoundingly, on September 8, 1923 The New York Times reported he was "charged with the theft of $500 from Ramer & Lissauer, neckwear concern at 97 Fifth Avenue."  The amount, about $7,000 today, seems hardly worth the accountant's professional ruin.


In October 1943 real estate operator David W. Frankel purchased the building, assessed at the time at $95,000 (just over $1.3 million today).  In reporting on the sale The New York Times forgot about Henry Corn's 1897 purchase of the site, saying that the "Crosby and Delafield families...have owned the property for about 100 years."

Although the garment and textile districts had moved north of 34th Street by now, No. 97 continued to house related firms for years.  In 1961 two of them, Alscap, Inc. and Lopa of Italy, Ltd. were slapped with violations by the Federal Trade Commission.  Both firms represented their Italian-imported fabrics as "wool."  They were not. 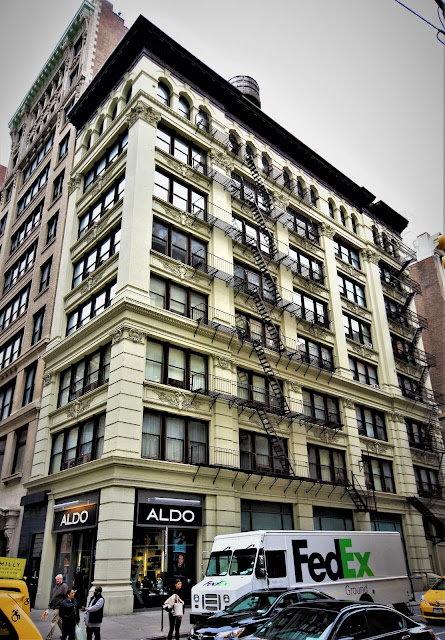 The end of the line for commercial tenants came in 1977 when a conversion resulted in eight apartments on each of the upper floors.   Other than an inexplicable coat of paint that obliterates the contrast of materials, even at street level there are few noticeable alterations to Robert Maynicke's 1898 design.