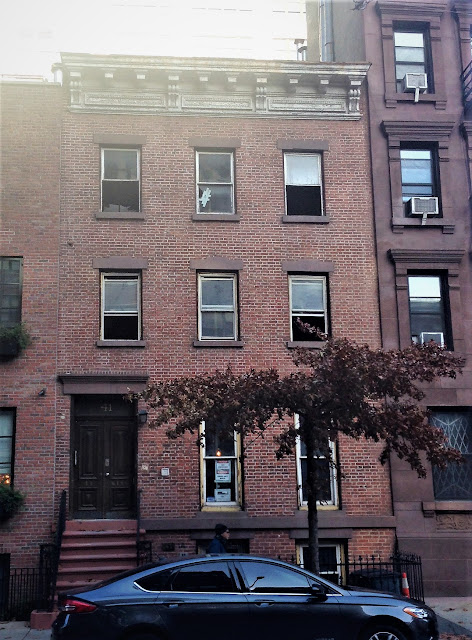 The handsome dwelling at No. 41 King Street was similar to its neighbors that arose on the block in the 1830s.  Faced in Flemish bond red brick, it was an ample 23.5 feet wide.  Two and a half-stories tall above an English basement, it was originally home to merchant class families.

The owner in the first years of the 1850s ran a grocery store at the northeast corner of Thompson and Houston Street.  But in 1855 the family decided to give up city life.  The "first class grocery" which was "now doing a good business" was offered for sale for $1,500.  The advertisement noted "reason for selling, the owner going into the country."

No. 41 became home to three brothers, Samuel, William W. and Andrew L. Roberts.  The young men's business enterprises were not nearly so upstanding as their predecessor.  Samuel ran the Oyster Bay saloon at the corner of Spring and Mercer Streets; and his brothers operated another saloon on the corner of Broadway and Leonard Street.  But their actual source of income was even less reputable.

In October 1860 Captain Walling of the "Detective Police" was tipped off that the house held a counterfeiting operation.  On October 30, armed with a search warrant, three policemen entered the house.  One, Officer Bennett, wanted to make sure no one escaped through the rear, so he opened the door he thought would lead to the yard.  "He was surprised to find that it opened into an extension-room where Andrew Roberts had been apparently at that very moment engaged in the manufacture of the worthless bills," reported The New York Times.

A search of the house turned up several packages of counterfeit bills, mostly in $10 denominations, copper printing plates and two presses.  The fake bills totaled nearly $4,000--about $120,000 today.   Genuine bills were also found which had been "altered by a skillful hand."

Police arrested Samuel in his saloon on the suspicion of being a partner in the operation.  The Times reported "It is supposed that the prisoners have been engaged for many years in the pursuit of altering genuine bills."

Robert and William were soon charged with an even graver crime.   They were linked to the April 1860 Adams Express train robbery on the New-Haven Railroad, along with Lewis Stebbins and Porter Kellogg.  On the first day of their trial, January 9, 1861, a reporter for The Times deemed them "as respectable looking a quartette [sic] as one would wish to see, in or out of a dock.  All of them sport whiskers and moustaches, and their ages range from 26 to 35."

The haul, consisting of cash, promissory notes, checks and a gold watch, amounted to $25,060--more than three-quarters of a million in today's dollars.   According to the testimony of L. A. Kinney, whom the crooks had contacted to help crack open a small safe they took with them, the group met several times in the King Street house to divvy up the loot and plan their next moves.  He said in part "I saw Roberts the next day at his house, where we counted the money [from the safe], and found that there was between $10,000 and $11,000."

Samuel Roberts was discharged by the judge on the third day of testimony.  Judge Smith said there had been no evidence offered to implicate him in the robbery.  Nevertheless, he was not out of hot water.  The Times reported "After the discharge of Samuel W. Robert, he was immediately rearrested by Officer Bennett on a requisition from the Governor of New-York on a charge of counterfeiting."

Not surprisingly, it was the end of the Roberts brothers' occupancy of No. 41 King Street.  The next family was affluent enough to hire a live-in nurse.  By 1864 the child was apparently old enough that her services were no longer needed.   On May 24 and advertisement in The New York Herald announced that "Mrs. Lovell, Ladies' Nurse" was now available.  Saying that she had been "educated in two of the first lying in hospitals in Europe, and has had 25 years experience," she gave the King Street family as a reference.  "Can be heard of at 41 King street, near Varick street."

The family was looking for a maid in July 1866 when it advertised for "A girl wanted--To do general housework, in a private family; one that can come well recommended."

It is unclear whether it was the same family in the house three years later when spare rooms were first rented.  On July 10, 1869 an ad offered "To let--in private house, 41 King street, a room and two bedrooms, to a family of two or three adults.  Rent $18."

The last of the advertisements for rented rooms appeared in the spring of 1872.  Shortly after the house was purchased by George W. Lithgow, a builder and contractor.  He and his wife, the former Frances Richmond, suffered tragedy when their only son died of "membranous croup" on the morning of June 3, 1874.  St. Clair Douglass Lithgow succumbed a month before his second birthday.  The toddler's funeral was held in the house the following afternoon.

The couple would go on to have five more children, daughters Ella Gertrude (who went by her middle name), Lillian and Mabel; and sons Howard and Leslie.

As the family grew, in Lithgow enlarged the house.  In March 1887 he filed plans to raise the attic to a full height, add a three-story, 10-foot extension to the rear, and do "other alterations."  The $1,200 construction costs (a little over $26,000 today) would have been significantly higher had Lithgow not done all the work himself.

The remodeled house was up to date with its bracketed Italianate cornice and modern double doors.  The parlor windows were extended to the floor.  Interestingly Lithgow did not bother to modernize the delicate Federal style iron stoop railings and newels.


In 1881 Lithgow co-founded the New-York Real Estate and Building Improvement Company.  The new firm listed its purposes as "to own and improve real estate."

The family were members of the Fourth Avenue Presbyterian Church, where George was a deacon.  It quite possibly this connection that eventually resulted in Gertrude's marriage to Rev. Abraham Woodruff Halsey on March 3, 1893.  Halsey had been the pastor of the Spring Street Presbyterian Church for 11 years.

The New York Times reported "The Rev. Mr. and Mrs. Halsey will sail this morning on the Kaiser Wilhelm II for Genoa with a three months' tour in view that will include all the interesting points of Egypt and Palestine and much of Europe."

The following year The World embarked on a fund raising drive to provide Christmas trees to impoverished children.   Mabel Lithgow and two other neighborhood girls, Elizabeth Gilmartin of 36 King Street and Clara Ode of 24 Charlton Street went door to door for the cause.  They proudly collected $6.

George, who was appointed a School Trustee in 1895, continued to operate his contracting business at least through 1904.  In the meantime, Gertrude and A. Woodruff Halsey (he had stopped using his full first name) lived in the King Street house as well.  Halsey had become secretary of the Presbyterian Board of Foreign Missions in 1901.

Gertrude accompanied her husband on his exotic missionary trips, including one to the west coast of Africa in 1904-05.  When the Presbyterian Union held its first winter meeting at the Hotel Savoy in October 1905, Halsey gave an "illustrated address entitled 'Snapshots in Africa,'" as reported by the New-York Tribune.  The newspaper explained "Mrs. Halsey took a number of photographs from which stereopticon views have been made" and added "The music will be furnished by Henry P. Burleigh, the colored barytone [sic] of St. George's Church."

The Halseys lived on in the house, along with Lillian who was here as late as 1910.  Rev. Halsey continued to be a visible figure in the Presbyterian Church and in the Board of Foreign Missions.  He made headlines in 1914 when he traveled 1,2300 miles in the Near East visiting missions and schools established by the Board.

He died in the King Street house on April 20, 1921 at the age of 68.  In reporting his death, the New-York Tribune pointed out, "Dr. Halsey was president of Woodrow Wilson's class at Princeton University."

Gertrude continued to live at No. 41 until her death on November 12, 1945 in Bryn Mawr, Pennsylvania, following a brief illness.  She was 78 years old.  Her funeral was held in the First Presbyterian Church on Fifth Avenue two days later.

The house became home to Philip Olin Keeney and his wife Mary Jane, who moved in in 1947.  It was the time of the Red Scare--when hysteria over the perceived threat posed by Communists and the Soviet Union launched intense Senate investigations which many perceived as witch hunts.  The Keeneys were directly in their sights.

Both librarians, they were members of the liberal group The Progressive Librarians Council.  Mary Jane had worked at the Board of Economic Warfare in Washington D.C. and Philip handled classified materials in the Library of Congress.

On April 5, 1949 a process server arrived at No. 41 King Street "calling for the appearance of Mr. Philip O. Kenney" on May 10.  It was followed up on May 2 by a telegram from the House Committee on Un-American Activities "directing him to appear before the House Committee."

In the meantime, Mary Jane was under suspicion of passing information to the Soviet Union.  Both testified before the House of Representatives Committee on June 9, 1949.   When asked if he were a member of the Communist Party, Kenney replied "I refuse to answer that question on the ground that it may tend to incriminate or degrade me."  In fact, he responded to many of the questions with the same phrase.

Although Mary Jane purported that she was not a member of the Communist Party, she proudly confirmed that she was the author of the 1939 article in Black and White magazine entitled "The Making of a Radical."

Both were convicted of contempt of Congress for refusing to answer questions.  Despite their alleged connections with what was called the Silvermaster Spy Ring, they were not charged with espionage.   Now without jobs, they opened the Cinema Club on Sixth Avenue and 9th street, to screen foreign language films.

By the mid-1950s the house was converted to apartments--a duplex in the basement and parlor floors, and two apartments on each of the upper stories.

Among the first tenants were writer and editor Philip H. Dunaway and his wife Lillian.  While he was known for his editing of biographies, he had also held a number of Government jobs.  In 1939 he headed the editorial and research staff of the Senate Railroad Investigating Committee, of which Senator Harry S. Truman was a chairman.  In 1942 and '43 he oversaw the project operations staff of the Office of Foreign Economic Administration, and the following two years was chief editor of the research and analysis branch of the Office of Strategic Services.

In 1988 well-known literary agent Charlotte Sheedy purchased No. 41 for $1.1 million.  When she sold it to rare coin dealer Louis DiLauro in 2004 there were two duplexes in the main house and two one-bedroom apartments in the rear extension added by George Lithgow.  Sheedy made a tidy profit, selling the house for $3.3 million.  DiLauro announced he would live in one of the duplexes and continue renting the other units.

In 2017 plans were filed to reconvert the house to a single family home.  Ongoing construction in December appears to be a gut renovation.  The exterior, on the other hand, is little changed since George Lithgow made his own dramatic make-over in 1887.