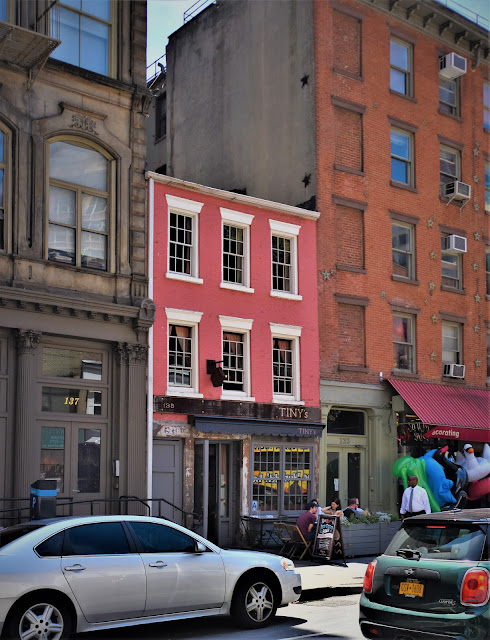 As the block of West Broadway between Duane and Thomas Streets developed in the first decades after the Revolutionary War, mason and builder Richard Kidney leased several plots from James Morris around 1810.  He erected several speculative Federal-style houses, including No. 37, approximately in the center of the block.

Faced in Flemish bond brick, the house was three stories tall with a peaked roof which would have been pierced by one or, probably, two dormers.  Its sides were clapboard and its splayed lintels were typical of the period and style.  Most likely a shop was always at street level.

The first occupant seems to have been the family of Peter Carion.  What he sold in the store is unclear, since he is listed merely as "merchant."  Carion was followed by bootmaker Jacob Knob, and by James Gallgher at least by 1853.

While Gallagher described his store as selling "findings" (a term which would later fall away in favor of "notions," meaning sewing supplies like needles, thimble and thread), he spent more advertising money on his real estate business.

In February 1853, for instance, he offered for sale "a four story brick house and lot, in Seventh avenue, between Twenty-fourth and Twenty-fifth streets."  The sale price, $6,000, would be equivalent to about $192,000 today.

Gallagher continued to sell real estate from here through 1860.  Interestingly, in February 1858 he was offering the "house and store" just two doors away, at No 41 West Broadway.   No signs of Gallagher, his real estate business or his findings shop appear after 1860.

A year or so before then the peaked roof was removed from the building.  Living upstairs was the Detert family.  Herman C. Detert was a member of Troop F, Third Regiment, or Third Calvary.  The men were known as the German Hussars.  Detert died on July 21, 1859 just 27 days before his 32nd birthday.  His funeral was held in the house. 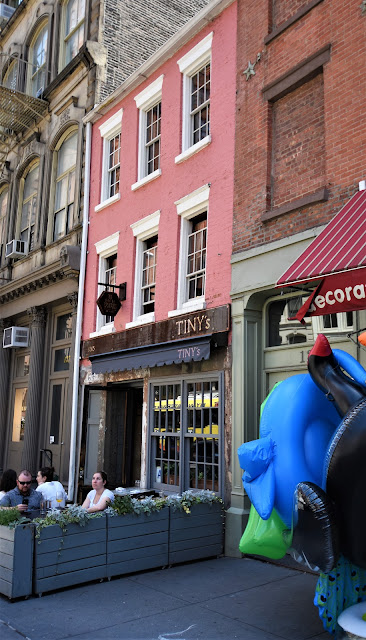 In 1861 George Mudeking and his wife, Margaret, purchased No. 37, and moved into the upper floors.  Mudeking described himself as a "cigar merchant" and the store as a "grocery."  Both terms were diplomatically flattering.  In fact, Mudeking operated his saloon here.

Six years later, on April 23, 1867, he opened for business as usual.  The problem was it was an election day.  He was arrested for violating the law prohibiting anyone to "publicly keep, sell, give away or dispose of any strong or spirituous liquors, wines, ale or beer" within a quarter mile of a polling place.

By 1873 Mudeking had sold his business to James Rusch.  On January 31 that year The New York Times reported that "A fire occurred in yesterday morning in the lager-beer saloon of John Rusch, No. 37 West Broadway, causing slight damage."

Rusch ran the saloon until early 1875.  An auction was held on February 5 of "the Fixtures of the restaurant and drinking saloon, 37 West Broadway [including] a new patent Range, &c."

Margaret Mudeking, now a widow, had leased the saloon space to Charles Meisinger a few weeks before.  His watering hole would last until 1881 when a far different business took over.  Caroline West of Brooklyn signed a 10-year lease beginning on May 1 that year.  While her name appeared on the paperwork, she most likely had help in running the business from her husband or other male partner.  The store was listed as "machinery, tools, horse, wagon, &c."

In 1897 the City renumbered West Broadway, giving Margaret Mudeking's building the new address of No. 135.  As the dry goods district overtook the neighborhood by the turn of the century, the store changed personalities again.

In 1911 ex-City Chamberlain Charles H. Hyde was facing a charge of swindling a client.  Israel Tilden, a law student and clerk, applied for a change of venue, claiming that Hyde was so hated locally that he could not receive a fair trial.  To support his application Tilden presented the court with an affidavit alleging that local businessmen had disparaged Hyde, assumed he was guilty, and called him unflattering names.

The problem for Tilden and his client was that at least a dozen of the men learned of the affidavit and told reporters they had never made the remarks attributed to them.  One of them was Isidore Marcus, whose store was in No. 135 West Broadway.

On December 28, 1911 an irate Marcus appeared in court to deny the allegations and attempt to restore his good name.  The following day The Times reported he "swore that he had never 'laid eyes on Tilden,' and that it was untrue that he had said 'They stuck me and Hyde and the whole bunch should be shot.'"

In 1922 the entire building was taken over by the Star Iron Works.  As the neighborhood continued to be more industrial in nature, it later housed Bogen's Express Co. and the Standard Scale Service and Repair.

The district around No. 135 saw a transformation in the last years of the 20th century.  In April 2011 Matt Abramcyk, formerly the owner of the Greenwich Village restaurant the Beatrice Inn, opened the restaurant Tiny's and the Bar Upstairs on the first and second floors.  The top floor became an apartment.


The 200-year old house is painted a flamingo pink today.  And while nothing remains of its historic ground floor and the peaked roof was lost more than a century ago, it still flexes its residential appearance.