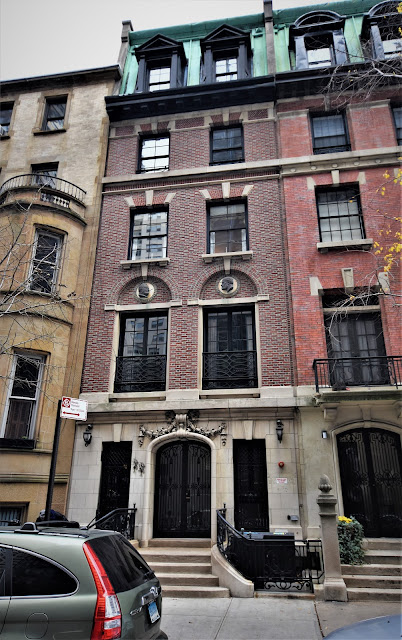 In the fall of 1902 developers W. W. & T. M. Hall commissioned the well-known firm of Welch, Smith & Provot to design a row of upscale townhouses that would stretch from No. 3 to 11 West 73rd Street.  Brothers William and Thomas Hall were highly active in developing the uptown neighborhoods on both sides of Central Park, and often worked with the architects.

The stately row was completed in 1904.  Each of the upscale homes was slightly different; but they flowed together as a harmonious whole.  No. 11, at the west end of the row, was a surprising blend of French and American architecture--with a Beaux Arts limestone-faced base decorated with carved swags.  The double doors, above the sweeping low stone stoop embraced by curving iron railings, were guarded by elegant iron grills. 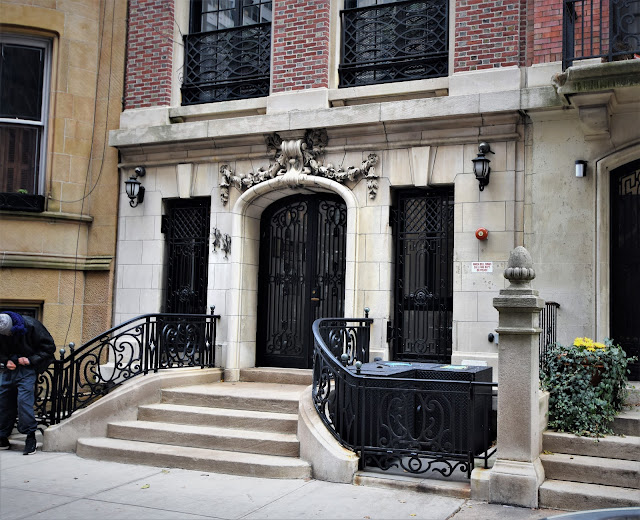 In sharp contrast, the second through fourth floors echoed early American roots.  The neo-Federal facade was faced in Flemish bond red brick; their headers charred to intimate age.  Limestone keystones within the splayed brick lintels were elements of the Federal style.  The fifth floor took the form of a copper-covered mansard where two dormers featured Doric pilaster and triangular pediments.

Eddy and his wife, Emma, had three children, sons Lubin and Solon, and daughter, Irene.  Eddy was a partner in his father's perfume and cosmetics company, the Solon Palmer Company.  Founded in 1847, the firm's products competed with French perfumes and powders; a significant struggle given the infatuation of upper class women for all things French.  Less affluent female shoppers, however, made the company a huge success and its owners wealthy.

While Emma was involved in a few social groups--she was a member of the Universal Sunshine Society, for instance--her husband seems to have remained focused on business.  His name does not appear on the membership lists of social or political clubs, and the family's name rarely appeared in society pages for their entertainments.

An exception was on October 26, 1910 when Irene was married to James Oliver Boon of Nashville, Tennessee in the Church of All Angels on West 81st Street and West End Avenue.  Lubin, now married, and Solon were among the ushers.  Understandably the church was filled with out-of-towners.  The New-York Tribune noted that the "ceremony was followed by a reception at the home of the bride's parents."

Eddy Palmer added to his investments by purchasing real estate.  In June 1917, he paid about $700,000 for the newly-erected 13-story apartment house at No. 420 West End Avenue.

The road ahead for the Palmer mansion looked bleak in 1955 when it was described in Department of Building document as having 18 "furnished rooms."  But Edward J. and Joy Hornick came to its rescue in 1959.

They did a renovation that resulted in a doctor's office and apartment (to be "used conjunctively" according to the Department of Buildings) on the first floor, and a single family residence above.  The 1904 exterior was untouched but for one striking addition.

Two bronze silhouette portraits of Franklin D. Roosevelt and Sigmund Freud on marble roundels were installed within the tympani of second floor windows.  The men were admired by Hornick for their history-changing contributions.

The ground floor office and apartment were leased to  friend and colleague, Dr. John W. Thompson.  He, too, was a professor of psychiatry at Albert Einstein College; but he was internationally known as an authority on mental disorders caused by "disasters and persecution"--conditions that fall into the modern term Post Traumatic Stress Disorder.  The New York Times later said that "In his private practice, at 11 West 73d Street, he preferred to treat the psychotic, or most severely disturbed, patient."

Following World War II he was the chairman of the Committee for the Rehabilitation of Victims of Manmade Disasters.   He founded a "therapeutic community," as described by The Times, near Paris to treat concentration camp survivors.   With other American physicians and psychiatrists, he was successful in encouraging the German Government to compensate concentration camp victims.

Dr. Edward J. Hornick died of cancer at the age of 66 on September 25, 1984.  The following year, on August 23, John W. Thompson suffered a heart attack while on vacation in St. Thomas, Virgin Island.  He was 59 years old.  Their deaths ended a remarkable chapter in the history of No. 11 West 73rd Street.

Joy Hornick remained in the house into first years of the 21st century.  Today passersby sometimes pause to examine the bronze portraits on the handsome facade.  Not all of them get the names right.