Home to a Compassionate Doctor and an Activist Lawyer -- 323 West 22nd St. 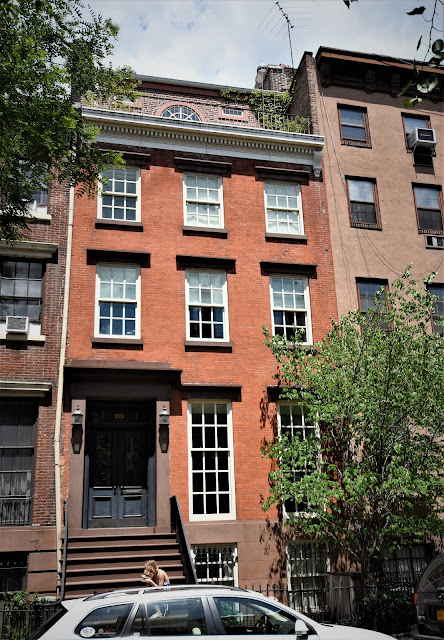 The Chelsea area was undergoing the first signs of real development in 1835 when Nicholas and Sarah Ludlam purchased a substantial stretch of property on West 22nd Street, between Eighth and Ninth Avenues, from Clement C. Moore.  Moore had a grand vision for the newly-forming residential neighborhood on what had been his family's summer estate.  The deed for the land included the provision that before May 1, 1836 the Ludlams erect at least one substantial residence measuring 37-1/2 feet wide.  In other words, a mansion.

The couple complied by building their own residence at No. 333 West 22nd Street.  It was most likely identical to the house next door, erected almost simultaneously for Joseph Tucker with the same deed requirements.   The remaining plots sat undeveloped for several years.  Finally, in 1843, Moore relented and allowed the Ludlams to divide the property into five 22-1/2 foot wide building lots; while still insisting the homes be upscale.

The first to be built was No. 323, completed in 1843.   Faced in red brick above a brownstone English basement, the residence was three bays wide.  Handsome floor-to-ceiling parlor windows and a brownstone Greek Revival entrance distinguished the first floor.  The Greek motif was carried on in the Greek key designs incorporated in the stoop railings.  A prim, dentiled cornice completed the design.

Clement Moore's grand vision of an exclusive neighborhood never panned out.  By the mid-1850s No. 323 was being operated as a respectable boarding house.  An advertisement on November 13, 1859 offered "A pleasant suit of rooms, front, to let, with board; also a handsome back parlor for one or two gentlemen.  Dinner at six o'clock if desired."

The "suit of rooms" reflected the upright and relatively well-do-to status of the boarders.  Another advertisement that year offered an unfurnished suite of rooms that included a "reception room."

Following Susan's death her estate sold the house at auction in June 1895.   James W. Elgar paid $16,500, or about $487,000 by today's terms.  Despite the steep price tag, Elgar's boarders were not as financially well-off as those in the house a few decades earlier.

An exception was Dr. James Arthur Campbell.  He moved in with his wife, Marie, and their only son, James, Jr., around this time.  Campbell had been a well-known physician in the neighborhood for years.  He operated his medical practice from the house as well.  The family owned a summer estate in Morristown, New Jersey.

Campbell was born in County Derry, Ireland, one of nine children.  He studied medicine in London, Paris and Dublin and received his medical degree in 1889 at the Royal University of Ireland.  Shortly after arriving in the United States he opened his medical office in Chelsea.  The erudite physician spoke five languages, including a South African dialect.

More typical of the boarders at the time was Maggie A. Bennett.  She remained in the house into the new century, receiving $300 a year from the city for her deceased husband's police pension (about $8,850 today).   Another widow, Elsie Unger, died in her room on November 3, 1912.  The funeral for the 76-year old widow of Henry Unger was held in house the following Monday.

James Arthur Campbell, Jr., suffered financial embarrassment when he filed for bankruptcy in August 1919.  A few years later his father moved his office to the Hotel Chelsea.  On June 25, 1927 Dr. Campbell died in the New York Hospital at the age of 65.

Campbell's earlier decision to live and work in the 22nd Street boarding house was, perhaps, explained by the The New York Times which wrote "He was greatly beloved in the neighborhood, where it was said of him yesterday that he never aspired to have wealthy clientele, preferring to help the poor."

The year before Dr. Campbell's death a studio was added to the rooftop of No. 323.   While many studio additions of the 1910s and '20s were clumsy encroachments; this was rather elegant and sat back from the roof line, avoiding upsetting the proportions of the 19th century architecture.

The studio concept reflected a change in the tenants in No. 323, who were increasingly more artistic and politically liberal.  By 1920 Julius Wolf was living here.  That year he was the Social-Labor Party's candidate for President.

On August 22, 1927 thousands of New Yorkers protested the executions of anarchists Nichola Sacco and Bartolomeo Vanzetti.   In reporting on several of the many arrests, The New York Times reported "The men were represented in court by Miss Carol King, attorney for the Sacco-Vanzetti Emergency Committee."

The activist lawyer lived at No. 323 West 22nd Street.  The Times would later note "She was active in the founding of the United States divisions of the International Labor Defense and the International Juridical Association, and later of the Joint Anti-Fascist Refugee Commission, the American Committee for the Protection of the Foreign Born, and the Civil Rights Congress."

Similar-minded residents in the 22nd Street house were Sylvia and Sol H. Cohn.  They lived here in the 1930s and '40s, listed as members of the Communist Party.  Interestingly, Carol King was never a member of the Communist Party; but she fervently defended the right of free speech and the oppressed, most notably "cases involving what she considered improper interpretation or oppressive application of the immigration and naturalization laws."  She routinely represented labor unions in court.

The Times vividly portrayed her saying "A short, stocky woman of great energy, Mrs. King cared little for fashionable appearance, and was easily identifiable for her heavy, horn-rimmed glasses and her short, unruly dark hair.  She earned professional respect for her brilliant mind and her last-ditch fighting spirit."


The feisty 56-year old still lived at No. 323 when she died in Beth Israel Hospital following an extended illness on January 22, 1952. 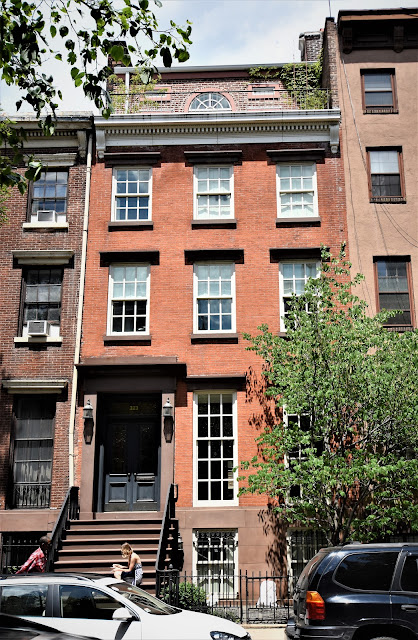 In the last quarter of the 20th century the Chelsea neighborhood was rediscovered.  The Eighth and Ninth Avenue district which had recently become seedy and crime-ridden, now saw the influx of young professionals.  In 2009 No. 323 was reconverted to a single family home; one of the best preserved of Nicholas and Sarah Ludlum's handsome row.