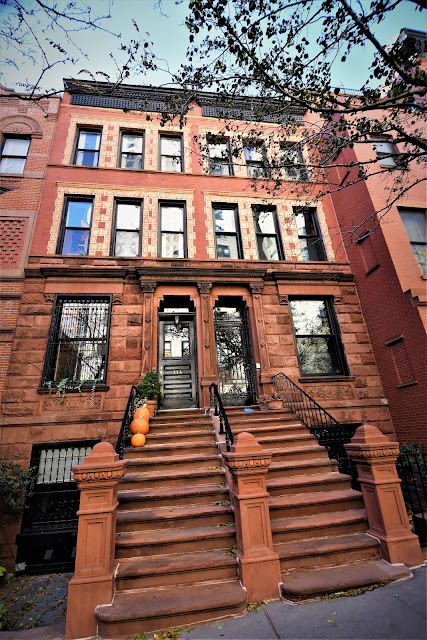 On June 29, 1889 the Real Estate Record & Builders' Guide reported that architects Flemer & Koehler were working on "eight three-story and basement stone front dwellings" for developer Edward T. Smith.  The announcement explained that six of the houses would be on Park Avenue and two around the corner on 94th Street.

Whether the publication simply got the facts wrong, or if Smith modified his project is unclear.  But the completed row on Park Avenue consisted of only five, and the other two were on 95th Street (on the block with the quaint nickname "Goat Hill").  The mirror image houses at Nos. 112 and 114 East 95th Street  stood distinctly apart from their Renaissance Revival siblings.

Although Flemer & Koehler started out with a Renaissance Revival canvas--rigid symmetry, rough cut stone at the basement and parlor levels, and paneled pilasters, for instance--they lavished it with extraordinary Queen Anne decorations; notably at the upper floors.  Here the openings were framed with cream-colored terra cotta tiles.  Each exhibiting a single leaf, their alternating large and small sizes mimicked quoins.  The three bays of the second and third floors were unified by a single terra cotta cornice.  The homes were crowned by pressed metal cornices with interesting friezes of regimented rows of protruding bosses. 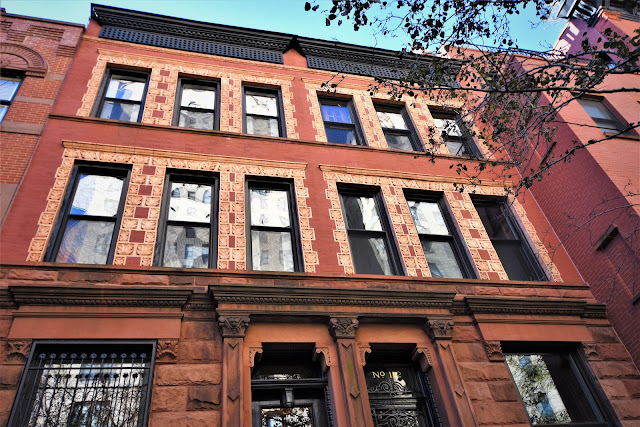 The construction cost of each house was $14,000--in the neighborhood of $377,000 today.   They were both purchased by Peter Wilkens as investment properties.  It was most likely scandal and subsequent business problems which forced Wilkens to relinquish title.

He was the owner of the Hotel Princess on Lexington Avenue at 25th Street.  In April 1895 the hotel was raided and, according to The Evening World, "men and women were found there and arrested."  The Parkhurst Society, led by reformer clergyman Charles Henry Parkhurst, battled Wilkens in the State Supreme Court, claiming he was running a disorderly house (the polite term for a brothel).   On April 17 the newspaper announced "Parkhurst Men Win" and reported that Wilkens's excise license had been revoked.


Wilkens sold No, 112 to Charlotte Lambrecht on May 5, 1896, taking an apparent loss.  The $14,000 price equaled Edward Smith's original outlay; making it most likely about half of what Wilkens had paid.  The following year, in October, he transferred title to No. 114 to his daughter, Meta Wilkens.

Charlotte Lambrecht quickly resold the No. 112 to Rachel Geiger, who, in turn, sold it to Max J. Ullman and his wife Sarah.   The couple had two daughters, Ruth Elizabeth and Leonora May.  Unlike the wives of many well-do-to businessmen, Sarah had her own career.  She was a graduate of Normal College (later Hunter College) and taught school for years.

Born on November 27, 1854, Max had started out in business with his father, Jacob, as a member of J. Ullman & Son at No. 17 Park Place.  In 1901 he and his brothers Nathan and Louis formed the Ullman Mfg, Co.   The firm manufactured and sold "pictures, frames, art novelties, &c. &c."  Its offices were in Manhattan and the factory was in West Virginia factory.   Max was also a founder of the Ullman Company, a Brooklyn-based printing firm.

Both Max and Sarah were active within the Jewish community.  He had been secretary of the Young Men's Hebrew Association as early as 1892; and Sarah was a long-time member of the New York Council of Jewish Women.

Max died at the age of 62 on August 28, 1917.   Although she retained possession of the 95th Street house, Sarah almost immediately left it.  On October 31 The Sun reported that she had leased it to Cyril Crimmins, the son of millionaire John D. Crimmins.

Of the ten children of the devoutly Roman Catholic tycoon, Cyril was perhaps the most colorful.  A member of the Fencers' Club and an avid yachtsman, his name routinely appeared in the newspapers for his sporting activities.  But a month before he signed the lease on the 95th Street house, it was more shocking news that drew society's attention.

On September 1 The Evening World reported "Cyril Crimmins, son of John D. Crimmins, has married Miss Kathryn Daly, one of the original attractions of the Ziegeld Midnight Frolic."  The wedding had been kept secret for a week.  Dalliances with showgirls, while not infrequent among society's young men, were disapproved of; but marriages with them were scandalous.  John D. Crimmins's opinion of the match was evidenced in The Evening World's mention "A member of the Crimmins household admitted that Mr. Crimmins did not attend the wedding."

The newspaper described the new Mrs. Crimmins as "a popular favorite on account of her looks and her dancing" and noted that she "has been one of the 'sweeties' in the present Frolic and took part in several of the more important episodes."

It appears that Cyril and his bride hoped to mend relations with his father.  The following day The Sun reported that the couple was "spending their honeymoon in the White Mountains, and according to an announcement from Boston last night they intend later to visit Mr. Crimmins's father at his country home, Firewood-on-the-Sound, at Noroton, Conn."

Just two months later John D. Crimmins was dead.  Cyril, along with six of his siblings, was at his bedside on November 9 when the 73-year old died of pneumonia.

Despite John D. Crimmins's misgivings, the marriage of Cyril and Kathryn was a successful one and they continued to play a significant part in society both in Manhattan and at their summer estate, Glenbreekin Farm, near Firewood-on-the-Sound in Noroton.


In the meantime, Meta Wilkens had originally leased No. 114, finally selling it on February 13, 1901 to Charles Wanninger.  A member of the New York Zoological Society, the well-to-do Wanninger and his wife, Sophie, had two daughters, Rita and Vera, and a son, Curt.

The family remained in the house until shortly after Rita's marriage to Kurt Richard Berger in St. James Lutheran Church in 1918.  Like Sarah Ullman had done, her parents retained possession of the house, but began leasing it the following year.

John F. O'Brien moved in in 1919 and would remain until 1922.  A corporate attorney, he was best known for his politics.  On May 21, 1918 the New-York Tribune had noted that he "is one of the veteran political leaders of the state."  He had served for four years as Secretary of State.

In October 1922 Charles Wanninger leased No. 114 to Dr. Henry Beller.  By now Sarah Ullman had sold the house next door to another physician, Dr. Eugene F. Du Bois.  As the Du Bois children grew up, the doctor began leasing the house in 1931.

His first tenants were George C. Barclay and his wife, the former Elizabeth Weed Moore.  In 1936 he leased it to Arthur B. Borden, and by 1942 to Dr. James R. Lincoln.  That year Lincoln's widowed mother died in the house while visiting from her home in Wareham, Massachusetts.

Eugene Du Bois, Jr. was a Lieutenant in the United States Naval Reserves.  Following his wedding to Carol Johnson Mali, the couple moved into No. 112.  Their daughter Caroline was born in March 1945.

In 1949 Dr. Du Bois leased the house to William J. Slocum and his wife, Ann.  They were a highly visible couple--journalist William Slocum was the writer of The New York Mirror column, "Bill Slocum Everywhere," and his wife, who went professionally by her maiden name Ann Gillis, was a radio and television producer of news and special events for the National Broadcasting Company.

Ann's "manner and competence," according to The New York Times, appealed to President Franklin D. Roosevelt and he recruited her to supervise his radio "Fireside Chats" during the Great Depression.  When Queen Elizabeth II visited the United States and Canada in 1957, Ann was in charge of the monarch's televised appearances.

In 1956 Dr. Du Bois sold No. 112.  Tragically, Ann Gillis died in the house the following year, on December 16, at the age of 44.  In reporting on her death, The New York Times mentioned "During the last two decades she had been the originator of many programs emanating from the White House and involving Cabinet members and other Government officials."

After owning the house next door for more than three decades, Charles Wanninger died on June 10, 1935 at the age of 81.  The following year the new owner was slapped with a violation from the Department of Buildings for operating an illegal "multiple dwelling."  It was sold in 1946 to Irene K. Neff as her private home. 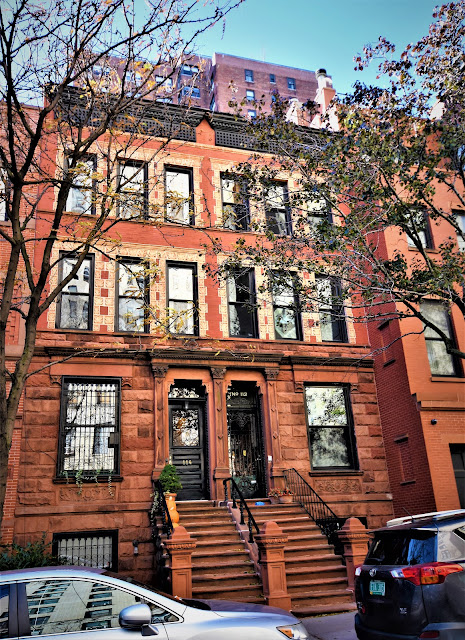 It was possibly their narrow widths, just 15.5 feet, that prevented either house from being converted to apartments in the second half of the 20th century.  In 2009 a joint restoration of their facades was initiated by Azor Contracting.  By now both were slathered in layers of paint, which was cautiously stripped away to reveal the remarkable tiles and the contrast of materials and colors.  The meticulous restoration included the stoop newels which had become so eroded that tax photographs had to be referenced to replicate them.


The remarkable Queen Anne twins today appear much as they did in 1890 when Goat Hill was seeing a flurry of development.