In February 1875 the Association of the Bar purchased the substantial brick home at No. 7 West 29th Street.  Midway between Fifth and Sixth Avenues, the mansion sat in a most fashionable area for the club’s proposed headquarters.  The neighborhood and the exceptional size of the property—75 feet wide, or about three full building lots—were reflected in the price; $100,000 or about $2 million today.

The Association’s minutes noted “The situation is healthy and agreeable, central, and easily accessible from every direction, and it was believed the property was not likely for a long time to come to depreciate in value.”  Regarding the mansion, the notes called it “A brick building of substantial structure covered forty-five feet of the width of the lots, and was of convenient depth.  By property alterations, without undue expense, it could, in the opinion of the Committee, be made adequate for the purposes of the Association for several years to come.”

Indeed, the Association was in the mansion for several years—twenty, to be exact.  Then on October 1, 1895 it sold the property as it prepared to move to its new headquarters that extended from 43rd to 44th Streets between Fifth and Sixth Avenues.   The buyer, real estate developer Edward H. Van Ingen, paid $225,000 for the property, $25,000 below asking price.  The New York Times surmised “The purchasers…will probably erect a business structure on the site.”

The New York Times was right.  The 29th Street neighborhood was no longer one of clubs and mansions.  Business buildings and hotels were now cropping up in the area.  Van Ingen commissioned esteemed architect Robert H. Robertson to design an eye-catching modern office building on the site of the venerable mansion.

Robertson had become known for his own take on Romanesque Revival in the previous decade.  But for what would become the Bancroft Building, he went in a completely different direction.  Completed in 1897, six stories of red brick and white stone were sandwiched between a limestone top floor and a three-story rusticated limestone base.   The stone bands and voussoirs created a vibrant contrast with the rich red brick—reminiscent of the popular Venetian Gothic and Ruskinian Gothic styles of a generation earlier.  Above it all, Robertson perhaps gave a friendly nod to the Marble Collegiate Church next door, facing Fifth Avenue, by adding near-matching pinnacles on the Bancroft roof.

With the building completed, Van Ingen was ready to cash in.  On August 25, 1897 he traded the Bancroft Building for another plot ready for development.  The New-York Tribune reported “The valuable plot of land at Broadway and Thirty-ninth-st., on which it was intended to build the Herald Square Hotel, was traded by Julien T. Davies to Edward H. Van Ingen for the Bancroft Building and a sum of money.”  The New York Times estimated the value of the still-vacant Bancroft Building at “from $650,000 to $750,000."

Davies was quick to fill his new building.  Among the first tenants were a surprising number of architects.  Two months later, in January 1898, Architecture and Building commented “The Bancroft Building, 3, 5, and 7 West Twenty-ninth Street, New York, is about to become quite an architectural centre.  Mr. Henry Rutgers, Marshall Babb, Cook & Willard, Parish & Schroeder and John E. Howe occupying the entire ninth floor.” 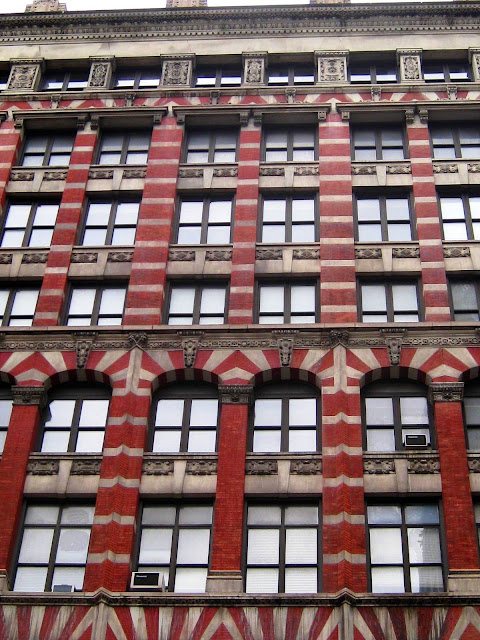 J. B. Colt & Co., “prominent in the business of making and selling projection lanterns and the like apparatus,” according to Electrical Engineer, also moved in that year, and expanded into the “sale of acetylene gas generators for the lighting of all kinds of buildings, etc.  On account of this decision they are offering special opportunities in price to buyers of projection apparatus, arc focusing lamps, magic lanterns, stereopticons, slides and other accessories.”  The J. B. Colt firm would be the first, but not the last, tenant interested in the growing field of photography.

In March Knauth Brothers signed a five-year lease on the store, basement and second floor. Manufacturers of surgical instruments the 23-year old firm had become what the Journal of Surgical Technology called “among the foremost houses in the trade.”  The Journal commented on the new space in the Bancroft Building.  “This establishment on Twenty-ninth street embodies the latest sanitary and artistic construction, and the total amount of space at the disposal of the firm equals about 30,000 square feet.”
Along with Knauth Brothers and the architectural firms came a number of publishers.  The Student Volunteer Movement for Foreign Missions moved in in 1898, publishers of "The Student Missionary Appeal."  The 563-page volume reprinted addresses given at missionary conferences.

Publisher R. H. Russell was another new tenant.  He took the entire sixth floor in March (sharing it with the Cassler Magazine Company) and within the next few months published Thomas Nelson Page’s “Two Prisoners,” “Poems,” by Robert Burns Wilson, and “Shapes and Shadows,” a book of poems by Madison Cadwein among others.

In January 1898 the International Committee of the Young Men’s Christian Association leased the entire 10th Floor.  By April the space was ready and the organization moved in.  The report of “The Jubilee of Work for Young Men in North America” reported “This floor is subdivided into a large number of offices occupied by secretaries of various departments such as Publication, Business, Field, Railroad, Army and Navy, Educational, Physical, Special Religious Work, and Boys’.  Here also is the editorial office of Association Men.”

A few days after the YMCA took the 10th floor, the Camera Club of New York leased the entire 8th Floor; signing a lease of five years.   Two years earlier Alfred Stieglitz, one of the principals of the club, had helped negotiate the merger of the Camera Club with the Society of Amateur Photographers.  The group was now among the wealthiest and largest clubs in the nation.  As a result the space in the Bancroft Building not only included the expected darkrooms, labs and camera equipment; it reportedly had all the amenities of an upscale club, including a library.

From here Stieglitz published the quarterly Camera Notes that included photogravures and half-tones.  The man who almost single-handedly raised photography from a hobby to an art form was honored with an exhibition of his photography here from May 1 to May 15 in 1899.

The following year, on April 2, Frederick E. Partington delivered a lecture for the benefit of the library fund of Vassar College in the Camera Club rooms.  Partington’s subject was “Romantic France and the Pyrenees,” and was illustrated by “slides taken from original photographs,” said The New York Times.  The newspaper noted that “There is a long list of prominent New York women, most of them members of the alumnae association of the college, who are patronesses.”

Meanwhile the Young Men's Christian Association International Committee had its hands full as the Boxer Uprising threatened missionaries in China.  Erratic communication left the office unsure if some families of missionaries were safe and rescue parties were sent by steamer.

Reverand Horace Pitkin wrote to the office here on May 14, 1900 saying "Our guard of soldiers still come at night, but they will be of little service in case of actual outbreak.  The morale of their presence is the only justification for keeping them."   Miss Mary S. Morrill, writing from Pao-ting Foo, prompted other missionaries to keep their children in the safety of the schools "since their large feet would show forth the family connection with churches."

A variety of tenants, many of them architects and publishers, continued to come and go.  In 1900 the American Swedenborg Printing and Publishing Society was here, as was the architectural firm of Hardy & Short.  In 1903 the Moyea Automobile Company established its offices in the building and on May 1 of that year Frank Presbrey Company, “general advertising agents,” took over the entire 8th floor.  The School Journal said at the time “This agency numbers among its patrons some of the most solid and representative advertisers in the world.” 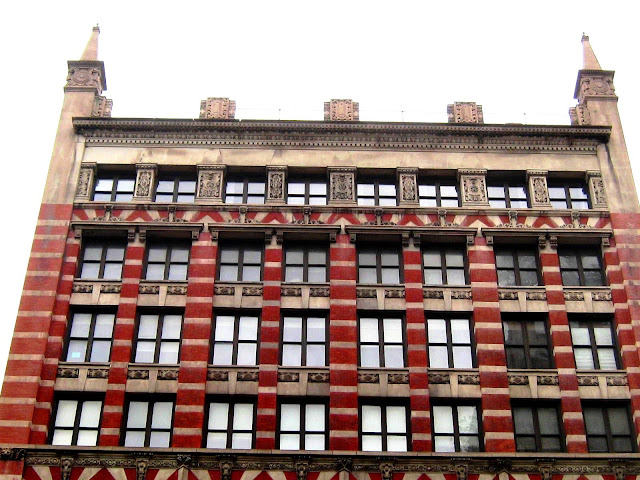 In 1911 when Hints, an entertainment magazine, moved into its new quarters the Anthos Company was already doing business here.  That company, run by Mrs. Millicent Searle, sold patent remedies like Tonia, Ceratum, Baquilles, Elixir and Sal-Nutrient.  Anthos representatives went door-to-door, selling the tonics mostly to housewives.  The practice drew the suspicion of the County Medical Society.

Police matron Isabella Goodwin was sent undercover to work for the firm.  She later testified before Chief Magistrate McAdoo that she would earn 20 cents for every dollar’s worth of preparations she sold.  She was advised “to influence patients to take three to six months of treatment.”  When she asked her supervisor whether she should not merely suggest a month’s treatment, he responded “Are you a piker?”

One day when Goodwin arrived at the Bancroft Building office feeling under the weather, she asked her supervisor if she should take one of the preparations. She testified that he replied “No.  Our medicines will do you no good.  I take some of them now and then, because I like the taste.”

Mrs. Searle was arraigned on the charge of illegally practicing medicine on May 30, 1911.

On December 12, 1914 Julien T. Davies traded the Bancroft Building for a new apartment building on Lexington Avenue and 72nd Street.  The new owner was the E. A. L. Realty Company.  The firm would not hold the property long and on February 11, 1916 The Times reported that the building’s original owner, Edward H. Van Ingen “yesterday acquired the title in the Bancroft Building.”

By now the millinery and apparel district was moving northward from the Broadway district below 14th Street.  In 1915 Eden Manufacturing Company was one of the first of the clothing firms to move in.  In 1919 another publisher took space in the building.  Gallon-Hall Corporation was the publisher of Automotive Engineering.

That same year tenants Schwabach & Raphael, who were “engaged in the cotton goods business,” according to The New York Times, purchased the building from Van Ingren.  The sale was perhaps a reflection of the expanding garment district and other apparel firms quickly moved in.  Among them were C. Reis, manufacturers of “cloaks, suits, waists and furs;” P. S. Farmer, resident buyer of cloaks and suits; the Manhattan Petticoat Company; and Weisberg & Zimmern. 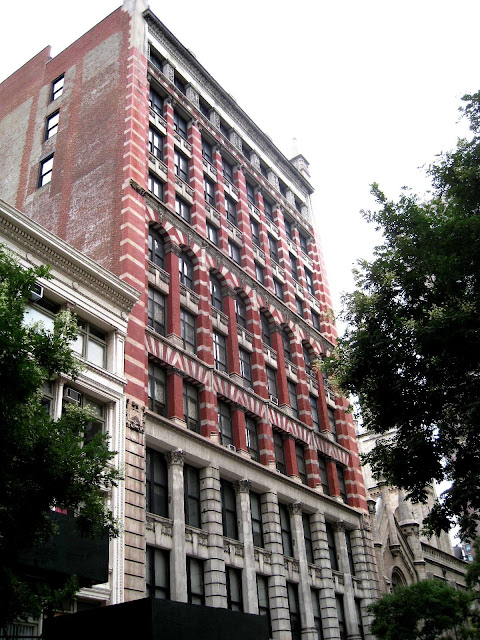 In the second half of the 20th century Marble Collegiate Church acquired the Bancroft Building.  In 1961 a renovation was completed resulting in meeting, religious, chapel and social rooms on the first floor and offices and a Sunday school on the second.  In doing so a well-intentioned but ungainly and architecturally inappropriate addition was erected at street level.

Concern over the preservation of architecturally or historically significant structures has never been a hallmark of religious institutions and in the spring of 2013 Marble Collegiate Church began plans to demolish the Bancroft Building.  In its place the church envisioned an obtrusive glass slab with no context in the neighborhood.

In June 2013 neighbors petitioned Community Board 5 and the Landmarks Preservation Commission to designate the Bancroft Building a New York City landmark.  The battle over the Victorian structure, not only an anomaly among Robertson designs but an historic spot in the history of American photography—continues; although the outlook for the Bancroft Building looks gloomy. 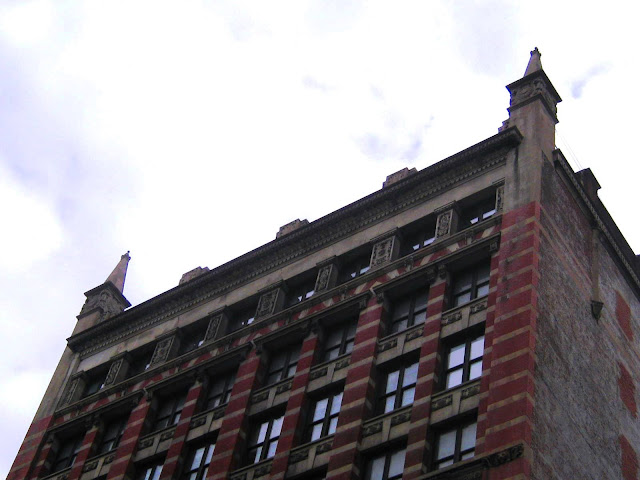 UPDATE:  The Bancroft Building was demolished in 2015.

photographs taken by the author
many thanks to reader Ward Kelvin for requesting this post
Posted by Tom Miller at 2:59 AM