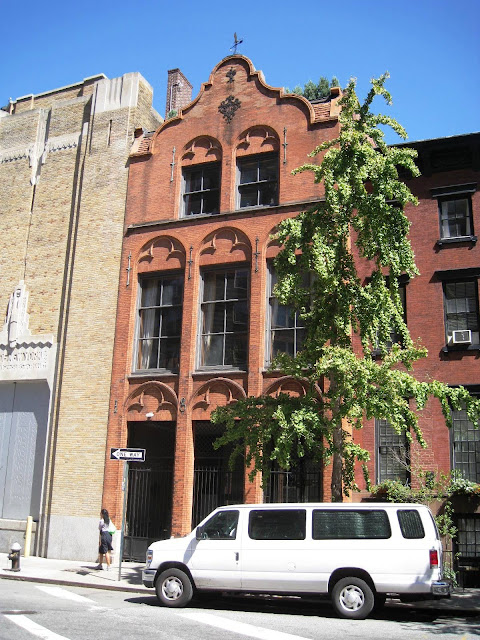 Unlike some privileged boys George Washington Vanderbilt was intrigued by books.  When only 12 years old he began cataloguing each book he read.   A series of small notebooks, entitled Books I Have Read, recorded each title, numbered consecutively, along with the author.  His affection for reading and books got him in trouble with his mothing, Maria Louise Kissam Vanderbilt that same year.  On May 27, 1875 he wrote in his dairy

“I have been way down town today and have displeased Mother, she gave me two dollars to buy a sketch book with which I went to four stores but could not get one so I spent it on books, besides $2.65 of my own money which Mother did not like…I got two volumes of the Young American Abroad.  And the last volume of the Yacht Club.”

Vanderbilt kept his list current and when he died on March 6, 1914 at the age of 51 following an appendectomy, his last entry was No. 3159—Volume III of Henry Adams’ “History of the United States.”  George Vanderbilt was reading an average of 81 books a year at the time of his death.

Few New Yorkers had the money or leisure time that enabled George Vanderbilt to pursue reading.  The few libraries that existed prior to 1880 were not open to the general public.  But that year the Free Circulating Library was incorporated.   The response was so great that the sidewalks around the first library—a single room in a building on 13th Street near Fourth Avenue—were blocked.  At closing time on one occasion, of the 500 books only two were left on the shelves.

It was the sort of worthy project that caught the attention of the bibliophile Vanderbilt and he decided to fund a branch of the Lending Library in Greenwich Village, opposite Jackson Square.

In 1887 Vanderbilt was no stranger to Richard Morris Hunt.  Work was underway that year on George’s stable on Staten Island and on the Vanderbilt Family Mausoleum, both designed by Hunt.  Ten years earlier the esteemed architect had designed the massive William K. Vanderbilt chateau on Fifth Avenue and within a year he would begin work on the palatial Marble House in Newport, also for William.

George’s library would be less grandiose, but no less enchanting.  In 1887, two years before Andrew Carnegie donated his first library in the United States; the first bricks were laid for George Vanderbilt’s.  There was no fanfare associated with the opening of the library on July 5, 1888.  A small listing in the New-York Tribune that day with the heading “What Is Going On To-Day” simply noted “Opening new Vanderbilt Library, Jackson Square.”

The handsome new building was, nevertheless, an “ornament” to the neighborhood.   Unlike the frothy confections that characterized some of the other Vanderbilt projects; the library was a take on a Flemish guildhall.  It was a very early example of the architectural fad that would sweep the city in the next decade recalling Manhattan’s Dutch roots.  A red-tiled roof hid behind a curving Flemish Renaissance gable and wrought iron strapwork decorated the red brick façade.   Wrought iron numerals on the four piers, just above the first floor, gave the date of construction: 1887.  A touch of Gothic was introduced by the trefoil decorations in the blind arches of the window openings.

Vanderbilt’s completed gift to the city cost him $40,000—about $900,000 in today’s dollars.  By 1892 the Free Circulating Library consisted of four buildings, including Vanderbilt’s.  “The Memorial History of the City of New-York” that year said “Wealthy citizens have contributed generously to this admirable free library, and its benefit to the community at large is evident from its circulation of nearly half a million of volumes in 1892.”

In 1899 the chief librarian, J. Norris Wing instituted a innovation nearly unheard of in public libraries:  the “Open Shelf” system.  Until now, the books were kept under the safeguard of librarians.   The concept of allowing the public to run free among the inventory of books was unheard of.  But Wing insisted that “The only proper way to manage a circulating library so as to avoid all unnecessary delay and friction in the bringing together of book and reader, is to run it upon the open-shelf system.”

Until that year, readers looked over the library’s catalog of books, noted the number of the volume he wanted, filled out a call slip and waited until the librarian returned “after a weary search to inform him that the book is out,” said The Sun.  Under Wing’s system, the reader simply wandered the shelves, chose his book and checked it out.

The Sun was impressed.  “From 1880, when the first branch was opened, up to about eighteen months ago the public was excluded from the places where the books were kept, and when the proposition was made to give the readers free access to all books in the library many of the attendants shook their heads.”  The experiment was tried with one branch, then two, and by August 1899 all the libraries were on board.

Librarians were pleased--instead of running back and forth all day with stacks of books they were giving recommendations and advice.  “Now we are fresh when our day’s work is done,” said one.  “Moreover, we know that we can and do help the people who use the library to an extent not one of us thought possible under the old system.  Before we mostly only carried books; now we advise about books.”

The newspaper pointed out the two drawbacks:  wear and tear on the books and theft.  Nevertheless, the advantages outweighed the negatives.  “I do not know how many books were stolen elsewhere,” said one librarian, “but in my branch the thefts do not amount to anything worth speaking about, and even if they’d steal much more, I would still prefer the open shelf.”

There was one other problem that some associated with the open shelf system—the transfer of communicable disease.  On November 11, 1897 Dr. John S. Billings, the director of the New York Public Library spoke in the Jackson Square Library regarding “The Disinfection of Books.”   Among his comments he said “At an investigation made by the State Board in Iowa three years ago it was found that six cases of scarlet fever were undoubtedly communicated through circulating library books.  Other diseases may be communicated in the same way.  There is not much danger o this from the edges of cards, although they are foul and filthy, and undoubtedly filled with bacteria.”

Dr. Billings presented the problem of disinfecting books.  Heat could not be used, since sufficient heat would destroy the bindings and pages; and applying chemicals was equally counter-productive.  “We cannot apply a solution of corrosive sublimate or zinc chloride.  The fumes of burning sulphur are both inadequate and undesireable.”

Instead he suggested placing the contaminated book under a bell jar with a saucer of formaline.  Although apparently effective it was a labor- and time-consuming process.  Nevertheless, nearly a decade later the fears of Dr. Billings would manifest themselves at the Jackson Square Library.  The janitor and his family lived in the building and in January 1908 his son fell ill with scarlet fever.

The library was shut down indefinitely.  When asked how long the building would be closed, Dr. Billings told reporters “That depends on the physician in charge of the case.  As soon as he orders the patient removed the building will be fumigated and opened.”  The New-York Tribune sympathized with the neighborhood readers.  “In the mean time the book lovers who patronize that institution will have to walk a half-mile or more to the nearest branches of the New York Library, on Leroy and West 23d streets.”

A few years earlier, in 1904, William Howe Tolman in his “The Better New York” praised the Jackson Square Library.  “It circulates about 126,00 volumes a year, and its cheerful reading room is filled day and evening with more than a hundred readers.  An interesting feature to be noticed upon entering the main library is the glass-covered cases against the wall, where are placed clippings from the illustrated papers of the day, depicting subjects which are interesting to people of New York at the time.  This is done weekly to create interest in current events, and after looking at the pictures anyone can consult the librarians as to proper reading in connection with each subject.  To help the musically inclined in the study of operas presented at the Metropolitan Opera House during the season, scores are lent for a period of three days each.”

The effectiveness of the library was in part enough to prompt a Department of Finance investigative committee to push for discontinuance of city support of a nearby recreation center.  That same year it reported “As to the library feature, there is no reason whatever for its existence in this centre, as the Jackson Square Branch of the New York Public Library…is in the same block and meets all the needs of the community in this respect.  This library is open in the evening until 9 o’clock and is well patronized by the young people.”

The innovative programs, like the current events boards, continued throughout first half of the 20th century.  Art displays were a regular event.  In 1951 there were an exhibition of drawings of pre-war Korea by a young Korean student and artist, Sam-Kih Min; and another of artwork by Turkish school children.  In the 1950s “story-hour” entranced children as story books were read aloud.

Then in 1961 in order to save the marvelous Jefferson Market Courthouse, plans were laid restore and convert that building to a library.  While the proposal would save the threatened landmark, it would mark the end of the line for the Jackson Square Library.   Richard Morris Hunt’s Dutch fantasy sat empty until artist Robert Delford Brown purchased it in 1967 for $125,000 as his residence and headquarters for his First National Church of the Exquisite Panic, Inc.   In 1970 an interior renovation by Paul Marvin Rudolph, among the world’s preeminent modernist architects, was completed.   “The AIA Guide to New York City” said of the completed project, “Brown and Rudolph’s conversion was a thoughtful, subtle endeavor, carving light-filled spaces from the dark masonry rooms within the old library.”

The New York Times was less appreciative.  Nancy Hass, thirty years later on March 2, 2000, said “The formal front doors and a chunk of the ground floor had been hacked away in a renovation of shocking proportions.  In their place was a rubble-strewn gated courtyard that dropped off sharply in the center, where a metal stairway led to an exposed basement.  The house seemed to cantilever precariously above the sidewalk.”

Brown affixed a plaque to the façade “The Great Building Crack-Up.”  Inside, Rudolph’s interiors reflected his genius at melding light and lines into spacial geometry and visual cohesion.  (Nancy Hass preferred the term “zany pad.”)

It would not last all that long, however.  Around 1995 television writer Tom Fontana discovered and purchased the now-available building.   Having paid about just under $2 million for the structure, he then nearly doubled the cost by having Paul Rudolph’s work obliterated.  New York Magazine, in 1997, called the process “de-geniusing it.”

Fontana, who told The Times “the place was ridiculous,” commissioned architect Ron Bentley to redesign the interiors.  In the annihilation of the Rudolph design, Bentley fashioned an upscale single family residence on the two upper floors.  Fontana’s offices were installed in the lower two stories where Rudolph’s single surviving feature, the entrance, remains. 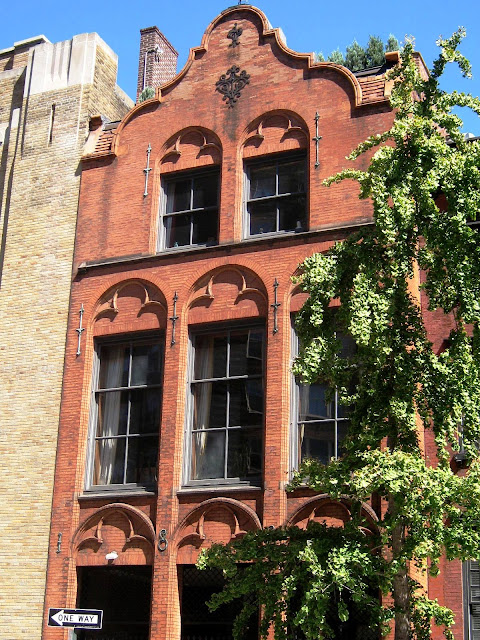 non-historic photographs taken by the author
Posted by Tom Miller at 3:21 AM