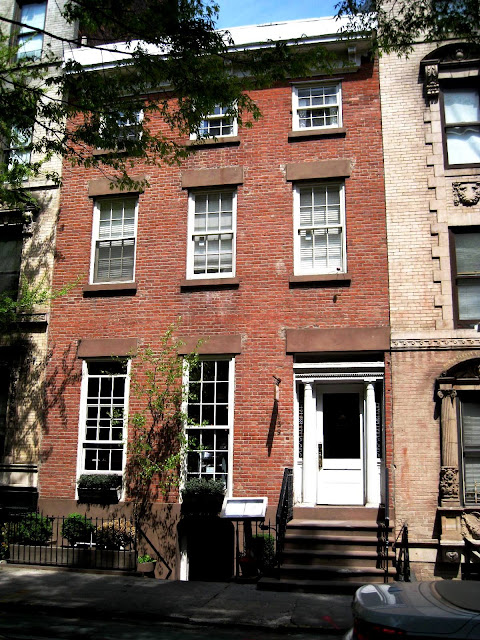 By 1834 Greenwich Village was quickly developing into a vibrant community.  That year Myndert Van Schaick constructed a row of eleven brick-faced homes along the northern side of West 10th Street between Greenwich Avenue and Waverly Place.


Van Schaick’s row of houses were built in the familiar Federal style with touches of the newly-emerging Greek Revival.  Among them was No. 149, a matching red brick, three-story home above a brownstone basement.   The stone stoop led to an elegant entranceway.  Fluted columns flanked the doorway, and detailed carving—dentil molding, delicate rope trim and pierced carving—embellished the areaway.

Ida Earl lived in the house in the 1850s, followed by the Simms family in the following decade.  Mary E. Simms owned the house in 1860, and her sister, Anna L. Fountain, and brother Augustus L. Simms, lived here as well.  Anna was a teacher in the Primary Department of School No. 16 on West 13th Street.  Augustus was employed as a sign painter.


Nearby at No. 370 Bleecker Street lived James Anderson and his family.  Anderson was tailor and sexton of the Central Methodist Episcopal Church on Seventh Avenue.  In 1860 his daughter, Clementina, met Augustus Simms.  It was the beginning of a love affair and a tragedy.


For nearly a year and a half Augustus called on Clementina at the family house.  Newspapers would later describe her as “a handsome and accomplished girl.”  But when tensions grew between Augustus and John Anderson, the young man visited Clementina only when he was certain her father was away.   Then, during the first week of July 1861, Clementina gave Augustus shocking and disturbing news:  she was pregnant.


He would later testify in court “At the same time she requested me to procure some pills for the purpose, as she alleged, to produce an abortion.  I asked her what kind she wanted; she said there were three or four kinds advertised, that Hooper’s pills were the best; as she had known of a married woman who had tried them.”


Augustus brought the pills, but they failed to work.  A panicked Clementina insisted that something else must be done “that her folks must not know it.”  Augustus Simms called on Dr. Edward M. Browne who, it was rumored, took care of such indelicate problems.


To make matters worse, as Augustus and Dr. Browne negotiated for weeks, Clementina’s mother died.   Simms attended the funeral and James Anderson noticed “that an intimacy still existed between him and my daughter.”


By now Clementina was showing.  Her father asked her if she were pregnant and did she intend to marry Simms.  Twice she denied the pregnancy, although her father insisted she should not be ashamed.


“I told her to reveal her mind to me, that I was father and mother to her; she made me no answer, and we parted; that was the last conversation I had with her upon the subject,” her father later recalled.


Finally on October 26 at 8:00 pm Clementina sneaked out of the Bleecker Street house while her father was out, leaving word that she was going to Newburgh, New York.  Instead Augustus took her to Dr. Browne’s house at No. 82 Eighth Avenue.


Browne performed two operations the following day.  Seemingly successful at first, Clementina slipped into what appears, by a 21st century perspective, to have been a serious state of infection.   On the 19th of November Dr. Browne sent a message that Clementina was ready to go home.  Simms procured a carriage for $1 and Browne’s housekeeper, Eliza Gordon, helped him get her into the vehicle.


When they pulled up to the Anderson house on Bleecker Street, the driver and the housekeeper took Clementina in.  She collapsed on a sofa in the hallway and, moments later, was dead.


Augustus was arrested on November 24.  A reporter in the station house said he “had the appearance of a man suffering under acute bodily pain, united with deep anxiety and great sorrow.”


The newspapers followed the scandalous story for months, recounting every testimony that could decorously be printed.   The New York Times noted on November 26, 1862 that “Much of it is entirely unfit for publication.”  The case, according to the newspaper, “created the utmost excitement in the City at the time.”


The name of the Simms family, including the innocent sisters, was tied to the sordid crime.  Eventually Dr. Browne was sentenced to three years in Sing Sing State Prison, the jury concluding that “Clementina Anderson came to her death by inflammation, produced by an abortion at the hands of Dr. Edward, M. Brown,” and further “the Jury say that Augustus L. Simms was accessory before and after the fact.”


As an interesting side note, a decade later, having served his term, Dr. Browne was back, practicing and living at No. 251 William Street.   When Sanford Murray, a bill collector from the New-York Gas Company, came to his door early in April 1873, Dr. Browne made “a desperate attempt to murder” him, according to The New York Times.   The newspaper ran the headline on April 17, 1873, “The William-Street Outrage.  Dr. Brown Committed—He Proves to be a Noted Criminal.”


In the meantime, with Augustus out of the house in prison, Mary and Anna continued to live in the West 10th Street house, leasing rooms to John J. Vanderoef.  John and his wife, Emcline, had a daughter, Mary Ella.  Tragedy struck when, on February 4, 1864, the 17-year old girl died in the house after a short illness. 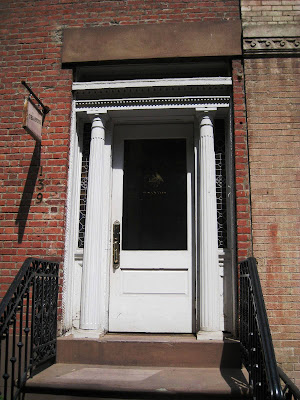 By the turn of the century Greenwich Village was the home of artists, poets, writers and musicians—along with its various other residents.  The quaint, twisted streets became known for their many subterranean cafes and nightspots.  Many of the old homes were converted to bistros, restaurants and coffee shops.


The parlor floor of No. 139 West 10th Street became home to Giovannis Renganeschi’s Restaurant.  The Italian eating spot would become a favorite with artists and writers and in 1908 its stock of wine and liquor was unparalleled in the Village.


Unfortunately Renganeschi’s had no liquor license.


On December 15, 1908 the restaurant was raided.  Police and federal agents hauled away 1,034 bottles of wine and liquor as well as six 50-gallon barrels of “red California.”  After sitting in Police Headquarters for three months, on March 29, 1909 the bottles were smashed and the casks and barrels broken open.  About $2,500 worth of alcohol flowed into the city drains.


“The Police Department laborers were more than an hour in destroying the wines, and by the time the last bottle was broken the open court reeked with the smell of intoxicants.  Several of the laborers said they felt partly intoxicated from smelling the stuff.  But not a bottle was spared,” reported The Times.


The Sun humorously added, “It was rumored at a late hour that there was danger of the fish in the Aquarium attempting to break jail in order to get their share of what was coming to the fish outside.”


Among the regulars at Renganeshi’s was artist John Sloan.  In 1912 he immortalized the restaurant in his “Renganeschi’s Saturday Night.”  John Butler Yeats, writing in The Seven Arts, spoke admiringly of the painting in 1917.  He noted that “In a picture, say the critics, there should be a point of fixity.  It is here furnished to us by the baldhead supping his soup.”  Yeats said of the painting that Sloan did not give satires of life, instead “he gives us his pictured comedies.”
Federal agents were back at No. 139 West 10th Street on July 24, 1930.  Prohibition had been in effect for a decade when the restaurant was raided and “fifty bottles described as assorted liquor were taken,” said The Times, along with two prisoners.  Two years later, on June 14, the restaurant, now known as John and Gene’s, was raided again by Federal “dry agents.”


Prohibition would finally pass away and patrons would happily get drunk once again.   At mid-century No. 139 housed a bar; still a familiar spot for local writers and artists.  In 1954 playwright Edward Albee  was drinking here and, according to his account in the Paris Review, he saw scrawled graffiti on a mirror that said “Who’s afraid of Virginia Woolf?”


The line stuck in his brain and he later told the interviewer “When I started to write the play, it cropped up in my mind again.  And, of course, ‘Who’s afraid of Virginia Woolf’ means…who’s afraid of living life without false illusions.”
In June 1957 Marxist and intellectual Myron Reed “Slim” Brundage opened a branch of his Chicago tavern College of Complexes at No. 139 West 10th.   Within the year he was fined on a cabaret charge, the saloon would be seized by the IRS for back taxes.  In 1959 the Mafia threatened his waiters and bartenders with bodily harm if he did not pay at 25 percent protection fee.  Brundage refused and, instead, closed the bar.


Before long he was back up and running, just in time for the 1960 Presidential nominations.  Brundage sparked the idea of the Beatnik Party and its nominating convention was held at No. 139 West 10th.  Bill Smith was nominated as “candidate for anti-president” and Joffre Stewart for “anti-vice-president.”


By the 1970s Greenwich Village was also the national center of the gay culture.  The space on the first floor became the Ninth Circle, a restaurant/bar that catered mainly to gay clientele.   However, even in the tolerant environment of Greenwich Village being gay in the 1970s could be dangerous.


In December 1979 the restaurant suffered a rash of assaults by youths who rushed into the establishment and roughed up employees and customers.  On New Year’s Eve 1979 The Times reported “The manager said one restaurant employe was injured Saturday night and another was injured Sunday along with several patrons who were knocked down when the youths rushed into the Ninth Circle around 5:30 P.M.”


The Ninth Circle was a fixture on West 10th Street for nearly two decades, replaced around 1993 by Caffe Torino, an Italian-style restaurant that, too, served mostly gay clientele.  Today it is home to de Santos Italian restaurant. 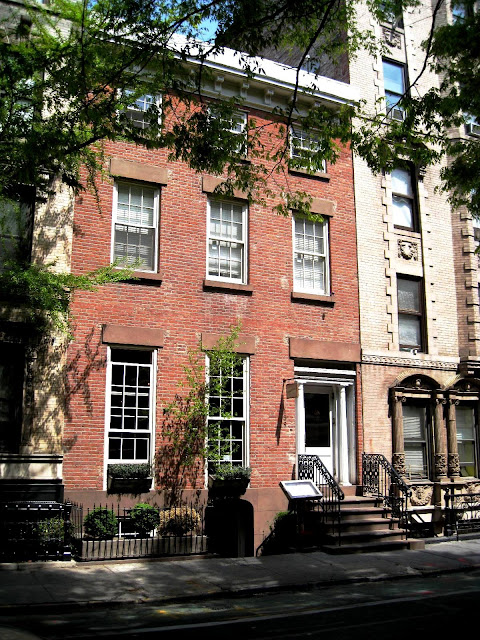 At some point the parlor floor windows were extended to the floor; but on the whole the brick house at No. 139 West 10th retains its 1834 charm.  And within its walls a wealth of social history has played out.

photographs taken by the author
Posted by Tom Miller at 3:41 AM