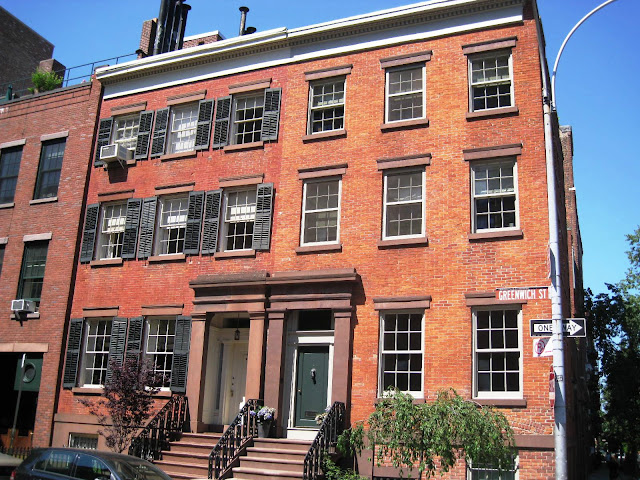 By 1830 the country estates surrounding the Village of Greenwich were being developed into building lots.  Quaint two-and-a-half story Federal houses lined many of the newly laid streets.  As the decade drew to a close, local builder William R. Halsey began erecting a block-long row of substantial Greek Revival homes on Greenwich Street between Horatio and Jane Streets.  Halsey was busy in the neighborhood, developing significant property as the Greenwich Village population exploded.

Construction on the row began in 1838 and was completed a year later.  At the northern end of the block Nos. 828 and 830 emerged as mirror images; their entrances nestled up against one another and their brownstone stoops sharing a central railing.  Halsey gave the homes a brownstone English basement that served as a base for the three stories of orange-red brick above.  Prim dentiled cornices ran the length of the block, unifying the structures.

Despite their proximity to the river front, the houses were designed with financially-comfortable families in mind.  No. 828 was purchased by well-known attorney Abraham Underhill.   The family lived here for many years before moving to No. 133 Lexington Avenue in 1853.  The attorney lost his son and wife within a year of one another and his substantial estate (he left nearly half a million dollars in today’s money to his infant grandson) was the subject of heated court battles years later.

The house was purchased by the Stewart family.  James Stewart made his living as a mason.  In May 1860 he was involved in what The New York Times reported was “The first case that has arisen under the Sanitary section of the Metropolitan Police Act, relative to insecure buildings.”

A new house had just been completed at No. 650 Broadway and the contractor who erected it, Langstoff N. Crow, complained that the building next door at No. 652 was shoddily constructed with an insufficient foundation; making it dangerous.  The four-story building housed a furniture dealer in the upper floors and a “looking-glass and picture-frame store” on street level.

James Stewart, among other construction experts, was called in to examine the structure.  He testified that the building “was in a very insecure condition.”  Alexis Portier, the furniture dealer, and Thomas A. Wilmurth, the mirror seller, were ordered to empty their stores before nightfall.

Merchant Isaac Jaques was the original owner of the corner house next door at No. 830.  He moved to Brooklyn by 1850, at which time the house was owned by Alfred Chamberlain.   Like his neighbor, Chamberlain was in the construction business.  He was a carpenter and also volunteered his time as a fire fighter at the Baxter Hook and Ladder Company No. 15 at No. 153 Franklin Street.

While the Stewart family lived on in the house at No. 828 Greenwich Street, No. 830 changed hands a few times.  In 1871 O. Patrick was living here, and by the late 1880s it was home to William Lyon.  In 1887 Lyon was foreman of the jury in the murder case of William Ellis, charged with the murder of his wife at No. 311 East 78th Street.   When Lyon became ill early in March, the trial came to an unscheduled pause until he was well enough to resume his duties.

The following year the house next door at No. 828 was fined for a “lack of fire escapes,” according to the Report of the Tenement House Department of the City of New York.

The corner house was sold in 1908 by Hannah Hinchliffe to Roland H. Kilpatrick.  The sale included its venerable stable at the southeast corner of Horatio Street.  The house and stable would stay in the family until March 20, 1920 when William W. D. Kilpatrick sold it to an investor.

Not long after, in February 1924, the Stewart family sold No. 828.  The New York Times remarked that “This is the first sale of this property since 1853.”  Simultaneously, the same brokers sold the two houses adjoining No. 828—Nos. 824 and 826; a deal that did not bode well for the survival of the old houses.  Already the two houses at the southern corner had been razed in 1909 for a commercial loft building.

Amazingly, while the rest of the block had been razed for commercial development by 1957 the two house at Nos. 828 and 830 survived.  The elevated railroad was taken down in 1940 and the homes continued their lives as rooming houses.  The basement level of No. 830, on the corner, was heavily altered for a shop.

With the Civil Rights Movement in full swing in the 1960s, Fred Hamburger left his apartment in No. 828 Greenwich Street to travel to Columbus, Mississippi to help the cause.  Segregationists pushed back.

On November 27, 1964 The Council of Federated Organizations told reporters that “white racists continued harassments in Greenwood, Vicksburg, Ruleville and Columbus.”  Civil rights workers were charged with trumped-up offenses and jailed—including Fred Hamburger.  He was arrested and jailed on two traffic charges, according to The New York Times.

Around the same time the house at No. 830 suffered a devastating fire.  The owners restored it to its original appearance, including the removal of the basement shop.  The impeccable renovation resulted in four apartments inside.  Only the absence of the brownstone cladding on the basement level hints at the former alteration.

In 1997 art dealer Matthew Marks and his partner, curator Jack Bankowsky, reconverted No. 838 to a single family house.  The three bedroom house with its seven fireplaces was put on the market in 2013 for $17.5 million.

The two remarkable survivors have come full circle, reclaiming the positions they held in 1839 as fashionable upscale homes.

photographs taken by the author
Posted by Tom Miller at 2:43 AM