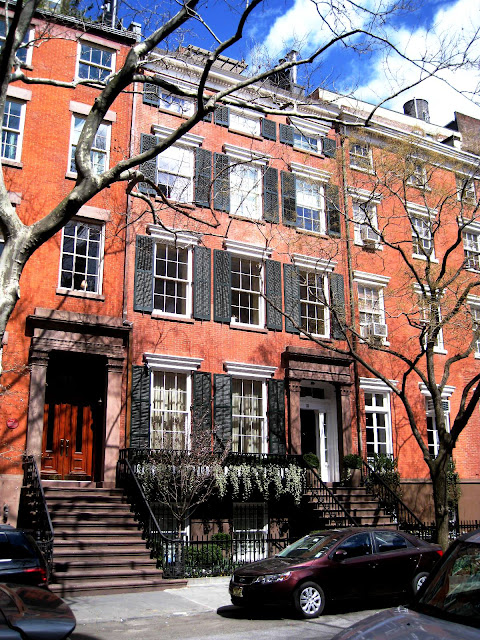 In 1834 Henry Brevoort, Jr.  made a move that would forever change the tide of Manhattan’s social migration.   Two blocks north of the still-developing Washington Square Brevoort erected his handsome Greek Revival mansion on Fifth Avenue—the first residence on the unpaved road that cut northward through what had been part of the Brevoort farm.


The sudden presence of the wealthy and sophisticated Brevoorts marked the neighborhood as socially acceptable.  Before long other moneyed citizens were moving west from the Bond Street area and erecting their own lavish mansions.   It spelled the beginning of Fifth Avenue’s reign as New York’s most exclusive residential street.


As the neighborhood developed, real estate speculators quickly got into the act by constructing rows of carbon-copy high-end homes along the side blocks.   One such group was erected in 1844 on the north side of 11th Street east of the avenue.   The homes were a generous 26 feet wide—a foot larger than the standard building plot.  Included in the row was No. 23 and, exactly like its neighbors, reflected the highly-popular Greek Revival style.  Four stories of red brick sat atop a high, rusticated brownstone English basement.  The floor-to-ceiling height parlor windows opened onto a handsome cast iron balcony.  The elaborately carved capitals of the entrance pilasters announced that this was the home of a well-to-do family. 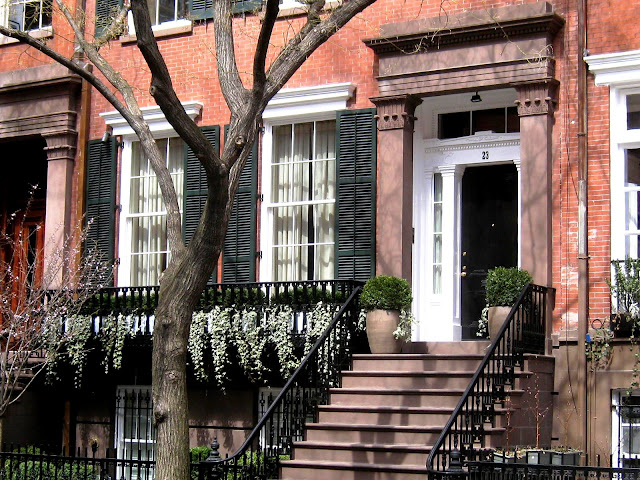 During the Civil War it was home to James Walsh, a “house-decorator.”  In the days before the unified, professional fire department was organized Walsh volunteered as a member of the Friendship Hook and Ladder Company No. 12.  Located nearby at No. 78 West 13th Street, the company included 39 other neighborhood residents.


Change to the neighborhood came swiftly.  By the end of the war commercial interests had already started inching northward onto the exclusive lower Fifth Avenue.    With the city’s population burgeoning, it was also a time of concern for the poor and outcast.   Lead by social reformers and socialites, missions, orphanages, clinics and other charitable institutions cropped up.


In 1870 the house at No. 23 was purchased by the newly-founded Free Home for Destitute Young Girls.   The object of the institution was “To afford gratuitous aid to destitute girls, and especially to provide a temporary home for poor and friendless girls who are exposed to the temptations of the city, and after sufficient instruction, to provide them with positions in Christian families.”


The wealthy women who organized and, for the most part, supported the Home made it clear that the girls would not receive charity alone—the goal was to train them in a position (normally as a domestic worker) that would allow them to make their way in the world. 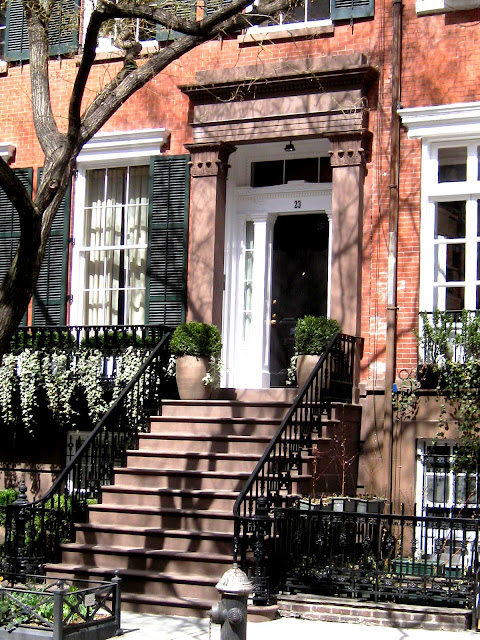 The Strauss brothers of Macy’s Department Store, Isidor and Nathan, would later be staunch supporters and Nathan touted the Home to a reporter.   He said the work that the girls were given “is not penal or punitive…The self-respect of these people is studiously cultivated and maintained.  They are in no sense humiliated by an intimation that they are under the social ban and have to expiate an offense.”


To be admitted to the Home a girl had to be between the ages of 12 and 25, “without proper home or protection, willing to be trained for self-support.”  The Home could take care of thirty-five girls at any time.


The admirable goals of the Free Home for Destitute Girls touched Victorian sentimentality and, therefore, presented a tempting potential for scam artists.  On May 5, 1892 The Children’s Aid Society warned the public “against an impostor, a woman of shabby-genteel appearance, from forty-five to fifty, medium weight, sandy hair, who visits houses usually in the evening, seeking to sell artificial flowers, which she represents are made by the children of the [Free Home for Destitute Young Girls] she is soliciting help for, and of which she is the manager.”


The dark Dickensonian nature of many Victorian orphanages and asylums was countered by the caring environment of institutions like the Free Home for Destitute Girls.   A Lower East Side mission worker told of a young Chinese girl, Ling Fong who “was an inmate of a bad house.”  The girl somehow got word to the mission of her plight and begged for her freedom.  The mission involved William Beecher, son of the renowned Dr. Henry Ward Beecher and they somehow arranged the escape of little Ling Fong.


The girl stayed for a week in the Beecher residence, then moved to the Brooklyn house of Mrs. Huie.  After a few days  Harriet Carter, a Baptist mission worker, came to pick up the girl.  Because the street car station was behind the house, the two left by the rear door.  Almost simultaneously a group of men appeared at the front door demanding the return of Ling Fong.


Mrs. Huie insisted there was no Chinese girl in her home and, when the men refused to leave, she told them “Then look through the place, and if I have her, take her away and my house too.”


The men searched closets, the attic, and every room  before they finally left “in a threatening mood but empty-handed.”  Later Beecher testified against the girl’s keeper, who was prosecuted, and two weeks later she was transferred to the Home on East 11th Street.


Ling Fong received her expected baptism here and furthered her education, including learning English.  The mission worker later reported that “Afterwards she married a Chinese restaurant proprietor, maintained a beautiful home and adopted a number of orphaned children, whom she cared for an sent through school.”


By the time World War I ended the institution had delicately dropped “Destitute” from its title.  In June of 1919 the New-York Tribune reported that the organization had sold the house.  “The sellers will obtain other quarters, but have not yet decided upon their new location,” said the newspaper.


After having housed over 30 young girls at a time for half a century, the handsome house at No. 23 East 11th Street became a single family home again.  It had been purchased by Preston Player for $24,000.   An engineer, Player was well respected in the hydro-electric field and had written the small book “Notes on Hydro-Electric Development.”  Harvard Engineering Journal praised the book saying it “contains much that is of value, not only to investors, capitalists and bankers, but also to engineers.”

By 1935 the residence was back to housing multiple occupants.  It had been taken over by the Theta Chi Fraternity of New York University.   In March of that year the fraternity broke a long-standing tradition—it began serving beer in the house.

A movement had recently started on campus that hoped to stem students’ drinking of hard liquor off campus by offering “softer” beverages like beer and wine.   The NYU Theta Chi chapter embraced the idea, which was also approved by law professor Louis R. Sprigg.

The professor told a New York Times reporter, “It would be a good idea if college men were to start drinking beer after the fashion of Old Heidelberg.”

Its life as a fraternity house for No. 23 would not last long and as the Second World War raged in Europe, O. C. Brewster lived here.   The engineer was put to work studying the uranium isotope and the development of a nuclear weapon.  As the A-bomb took shape and Brewster realized its deadly potential, he wrote a letter of warning to President Harry Truman from the 11th Street house.

In it he cautioned that "The idea of the destruction of civilization is not melodramatic, hysteria or crackpot raving. It is a very real and, I submit, almost inevitable result."

Brewster realized that the bombing of Japan would be necessary; but he feared further use of nuclear weapons.

"I do not of course want to propose anything to jeopardize the war with Japan, but, horrible as it may seem, I know it would be better to take greater casualties now in conquering Japan than to bring upon the world the tragedy of unrestrained competitive production of this material...In the name of the future of our country and of the peace of the world, I beg you sir, not to pass this off because I happen to be unknown, without influence or name in the public eye..."

In the 1960s Senior Vice President of Young & Rubicam,Charles E. Overholser, Jr., and his family lived here; but as the 21st century approached the house was divided into six apartments.

Put on the market at $9.3 million, the home sold at a decidedly lower price of $4.5 million.  In 2012 it underwent a major restoration to bring it back to a single-family home.   Today it is, perhaps, the gem of the row of surviving Greek Revival residences and it is easy to imagine the rustle of Civil War period skirts sweeping up the broad brownstone stoop. 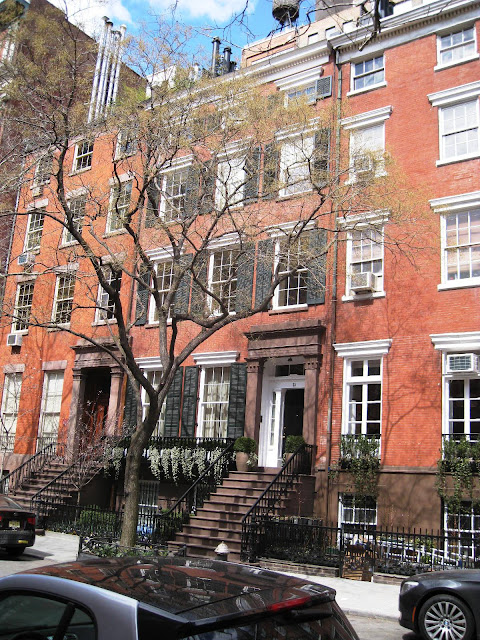 non-historic photographs taken by the author
Posted by Tom Miller at 2:33 AM