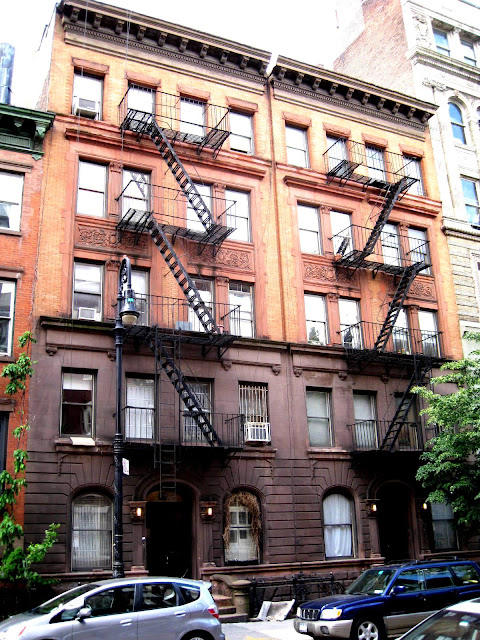 The quiet 10th Street block between Fifth and Sixth Avenues saw tremendous change throughout the 19th century.  The street of two-and-a-half-story Federal-style brick houses of the 1830s saw the rise of wide, brownstone-fronted Victorian mansions in the 1850s and ‘60s.  Then as the end of the century neared, apartment buildings replaced some homes and, as a result, the block became a delightful concoction of coexisting architectural styles and periods.

On October 11, 1890 the Real Estate Record and Builders’ Guide reported on the sale of the two brownstone houses owned by the Spiess Estate—Nos. 66 and 68 West 10th Street.  The Guide noted that compared to No. 53 West 11th Street sold the same day, the properties “did not fare as well, they being bought in for the owner at $47,500.”

The houses were purchased by William J. Moore who demolished them and set architect George Keister to work designing two matching apartment buildings for the site.  Moore intended his buildings to be up-to-date and comfortable, in keeping with the upscale tone of the block.

Keister reduced the sober nature of the base floor-by-floor.  The brooding brownstone basement with its rough-cut stone and rugged openings gave way to smooth rusticated stone at the first floor.  Here the façade was made more elegant with carvings and pilasters at the entrances.  The rustication melted away to smooth planed walls at the second floor.

Then suddenly the design changed course.   The upper three floors were clad in light colored brick trimmed in terra cotta.  Keister tossed aside the weight of the Romanesque brownstone base in favor of a light Classicist-inspired design with decorative panels and fluted pilasters.

The twin buildings filled with well-to-do tenants.  Among the first tenants of No. 66 were brothers Frederick R. Howes and Rueben W. Howes, who both served in the First Battalion, Naval Reserve Artillery New York.  Their wives lost no time entertaining.  Mrs. Ruben Howes held a reception on January 26, 1893, barely before the paint was dry; and a few days later The New York Times noted “Mrs. Frederic R. Howes of 66 West Tenth Street has been at home during the past few weeks on Thursdays.  Mrs. Howes will continue to receive on Thursdays until Lent.”

Both houses attracted professionals.  In 1893 Mercy E. Davis, C. S. treated patients in his apartment/office in No. 68 through the “absent treatment.”  The method claimed to cure disease through telepathy.  At the same time Daniel Williams, a clerk in the Third Judicial District Court, was in the building.

One other change was happening on the block at the time the buildings first opened.  Although the millionaires of nearby Fifth Avenue were quickly moving northward, the 10th Street block was still highly respectable.  Yet when envelope manufacturer Benjamin B. McFadden moved his family into No. 66 in September 1894, he quickly realized a shocking truth.  There were prostitutes on West 10th Street.

He moved out on April 1 and The Evening World reported on June 25, 1895 “He had to get out of the district on account of the number of disorderly houses in the street, and had moved to Jersey City with his family.”

McFadden complained about one brothel right next door.  “He had particularly observed 60, 64 and 69 West Tenth street, and said they were disorderly houses,” reported the newspaper.  “He had been frequently solicited by women in front of his own house.  All three of these houses were open all night long and the noise of the carousing and piano playing was very annoying to the neighbors.”

Apparently, however, McFadden was one of only a few tenants whom the ill-reputed women offended enough to leave.  The buildings continued to attract high-end tenants, many of them physicians.  Dr. Antoni Fanoni was in No. 66 in 1898.  The neighborhood was, by now, filled with artists (the famous Tenth Street Studio Building was just down the block) and one, Arnolda Premi, suffered a “bilious attack” on December 4.  Premi’s wife asked a friend to go to Dr. Fanoni for a prescription.

The prescription was filled and Premi took two doses—one at 11:00 in the morning with his coffee, another at 2:00.  He died before he reached the hospital.  Dr. Barbour of Bellevue hospital told reporters “Premi had certainly been poisoned.”

Dr. Fanoni shrugged off the incident.  “I was very busy in my office this morning, when a man came to me saying that his friend, Premi, had been taken ill…I told him I could not go with him and advised him to call some American physician.  He would not do so, and I then satisfied him by writing out a simple prescription to cover the symptoms described.  That is all I know of the case.”

If Dr. Fanoni’s reputation was scarred by the poisoning of his patient, it was restored when it appeared he found a cure for consumption, or tuberculosis, that same year.  Fanoni injected patients daily, or every other day, with what he described as “equine serum inoculated with the protiene and tubercular toxins.”  The results of his treatment of several local patients was reported in newspapers as far away as Australia's The Brisbane Courier.

Six-year old Albert Noussert and his family lived in No. 66 at the turn of the century.  In 1900 his parents enrolled him in a boarding school for boys in Tuckahoe run by William E. Duffy.  Little Albert was packed off to the exclusive school—there were only three other students--and his parents went about their routine, firmly assured that their son was in good hands.  It was not so.

The $12.50 per month board and tuition (about $300 today) must have seemed a bargain.  That, too, was not so.  A shocking expose in The New York Times in November that year said “Neighbors of the school complained that four boys at the place were almost daily turned out of the house in the morning by Duffy, who would then lock the building and depart, not returning until evening.  He would leave the boys some cold meat and a couple of loaves of bread on the veranda, their only food during his absence.

Complaint was made that the boys were neglected, were unclean, and half starved, and not properly clothed for inclement weather, but were turned out into the open air daily and forced to remain out of the building all day.  In bad weather they sought shelter in barns in the neighborhood, and were a source of annoyance to the neighbors.”

The Times added “The boys were not taught anything.”

Along with doctors (Dr.Stephen J. Clark joined the list in 1903) and little boys at boarding schools, there was at least one European title; albeit an obscure one.  Baroness von Groyss lived on the third floor of No. 68 in February 1912 when she sent invitations to Manhattan’s most socially-elite names to attend a concert, reception and supper at Delmonico’s.  The price to accept the invitation was $5.00.

The New York Times suggested that it was all a scam.  “Several persons of prominence were somewhat surprised last week by receiving invitations…Some of those who received invitations didn’t know who the Baroness von Groyss was.”  The newspaper mentioned that “She has given exhibitions of Hawaiian dances at various social functions.”

The baroness was quick to respond.  On February 12 she telephoned the Times office and said “This is the Baroness von Groyss of 68 West Tenth Street.  I wish that you would send a reporter down here to see me.”

When the reporter arrived, she accused the newspaper of stating “that invitations to my concert and supper had been sent out promiscuously and that many persons who were not acquainted with me had received tickets.  This is a misunderstanding.”

The $5 ticket invitations had been sent on behalf of the International Artistic Social Club of which she was president, she explained.  She also dismissed the idea that she would make money on the event.  “The fee will in fact scarcely defray the expenses of entertainment.”

In addition to the concert, the Valentine favors, the six-course supper accompanied by the Vienna orchestra from Shanley’s and dancing, the 200 “ladies and gentlemen of unquestioned social standing” would see some shocking performances.

“One of the most startling features, according to the Baroness, will be a spear and head-hunter dance by her protégé, Dogmeena, a lissome Igorrote maiden from the Philippines.  Dogmeena will dance in native costume.”

The “native costume” was a string of beads and her “maiden innocence.”

When the reporter suggested that the “costume” might be considered “somewhat indelicate,” the baroness seemed surprised and explained that native dances must be presented in native dress.

The reporter wrote “Another bizarre feature of the concert will be a series of Oriental dances, including a Hindu sword dance, performed by Prince Ishmail and an Indian girl, Ishtar.”  He added “The costumes to be worn by the dancers were vaguely described as native.”

An even more scandalous story at No. 66 began when Frank Stranz brought his pregnant wife to Dr. Fred Van Vliet here in April 1921.  The woman was far along in her pregnancy and, according to Stranz, the doctor performed an abortion “without his knowledge or consent,” according to the New-York Tribune.

Six years later Dr. Van Vliet would not get off so easily.  On September 15, 1921 27-year old Ruby Gonzales, a waitress in a hotel in Asbury Park, came to Van Vliet’s No. 66 West 10th office with her boyfriend, Herbert Ullman and her five year old daughter, Vivian.

While Ullman and the little girl waited, the abortion was performed.  Ruby Gonzales died on his operating table that afternoon.  After being questioned for eight hours, Dr. Van Vliet was arrested the following day for “having performed an illegal operation.”  This time he was charged with homicide.

Dr. Eugene T. Boyle also practiced from No. 66.  The problem was that he wasn’t a doctor at all.  On October 30, 1934 Boyle was sentenced to a term of not more than three years for practicing medicine without a license.  The New York Times frankly deemed him a “bogus doctor.”

In the meantime, No. 68 got its own share of negative publicity.  On January 12, 1932 broker Charles T. Morgan was indicted on forgery charges of $5 million in stocks.

Not all the residents, of course, were quack doctors and forgers.  Esteemed artist Emil Ganso lived and worked in No. 66 in the 1930s.  A retrospective exhibition of his work in 1944, three years after his death, called him “one of America’s finest print makers.”

Aside from the unsightly but necessary fire escapes and the replacement windows, little has changed in the outward appearance of the twin apartment buildings at Nos. 66 and 68 West 10th Street.   Their unusual transitional style adds to the rich assortment of architecture on this amazing block.

photographs taken by the author
Posted by Tom Miller at 2:41 AM