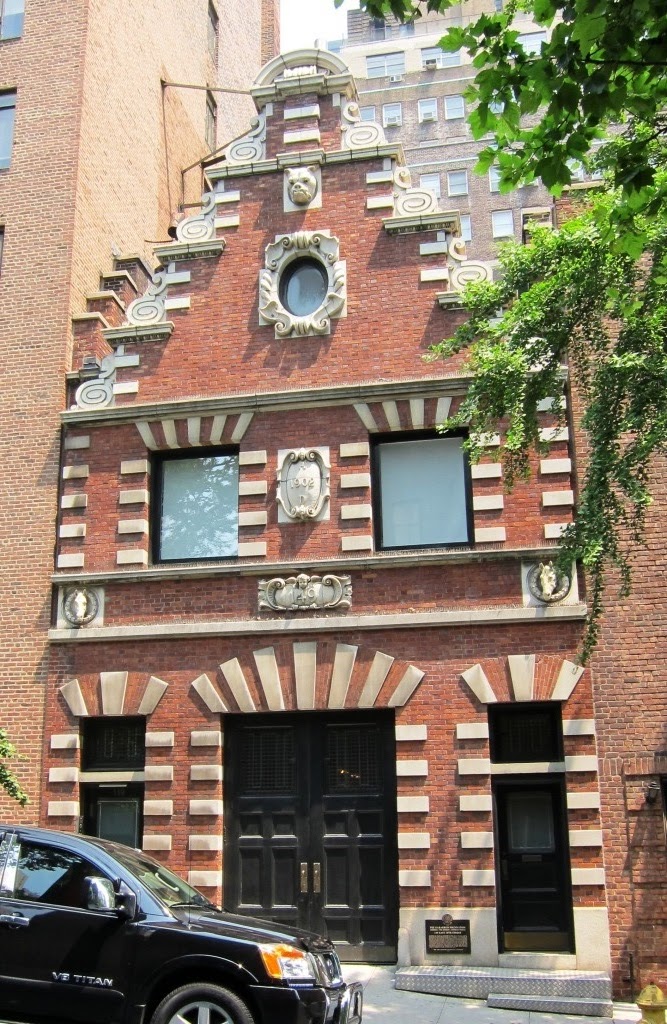 In 1902 John W. Smyth sold the four-story house at 149 E. 38th Street to real estate developer and clothing executive William R. H. Martin. In announcing the sale, The New York Times mentioned that “The buyer will erect a private stable on the lot.”

And indeed he did.

In New York City at the turn of the century, it was not merely one’s good name that reflected his position. The social elite strove to outdo one another in the finest homes, the best entertainments, and even in the appearance of their carriage houses. Utilitarian structures like private stables made their own statements regarding the social status of their owners--resulting in mini chateaux and Renaissance palaces for horses.

Ralph Samuel Townsend received the commission for the proposed stable. The architect, who was best known for his apartment buildings and hotels, gave a whimsical nod to New York’s roots by designing a Flemish Revival brick structure with a stepped gable; each step supporting a swirling stone console bracket. Stone detailing stood out starkly from the brick façade. Townsend added two full-relief wreathed horses’ heads above the first floor cornice and a large sculpted bulldog’s head high above the street. 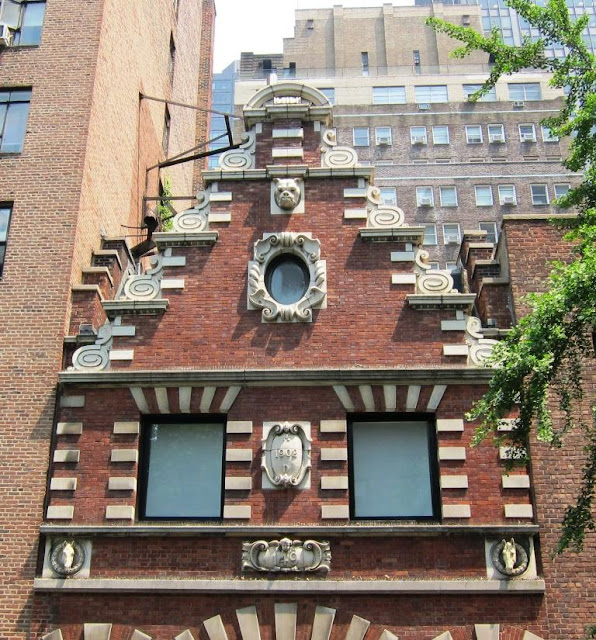 An ornate carved stone frame surrounded an oval window directly below the dog’s head, and behind the gable rose a tiled mansard roof.

Financier George S. Bowdoin, who lived nearby on Park Avenue near 36th Street, purchased the building in 1907 at a time when little-by-little motorcars were replacing horse-drawn vehicles. Bowdoin’s horses lived on the first floor while his coachmen lived upstairs. The banker’s elegant carriages lined up along one side.


Edith Bowdoin inherited the property when her father died in 1913. By now, however, it would seem that it was no longer being used as a carriage house. The 1909 Directory of the Breeders and Exhibitors of Dogs in the United States and Canada listed W. Cox as running his fox terrier breeding business from here.

In 1918 Edith Bowdoin had the horse paddocks removed and converted the lower portion of the building into a garage. After her death the property was sold to George Nichols who stored his four private vehicles in the garage portion while renting out the single family residence above.


The unique, ornate building lived a hum-drum existence through most of the 20th century until it was gutted around 1984. The new owner, who paid $2 million for the structure, installed multiple skylights and created soaring spaces – some 20 feet high.  But after the renovation and just before he could move in, he married and moved to California. The 6,000 square foot residence with its sleek spiral staircase and open spaces was rented to Jane Nichols Page, the granddaughter of John Pierpont Morgan, Jr.

Then in 1997 Donald and Ruth Saff purchased the property for about $3.4 million. Where horses once munched hay the Saffs now hung artwork by Lichtenstein, Raschenberg and Nancy Graves.

The Saffs used No. 149 as their personal gallery/home/office until 2002 when it became The Gabarron Foundation’s Carriage House Center for the Arts. The non-profit association was founded that same year to promote “the cultural wealth and identify of both Spain and America,” and hosted exhibitions and lectures from the space.

When the Carriage House Center for the Arts moved out in May 2011, the astounding building was on the market again, this time for $14 million.
Townsend’s flamboyant Dutch Renaissance carriage house, landmarked on June 17, 1997, is today a unique single-family home.