The four Ehrich Brothers, Julius, Samuel, Louis and William, opened their dry goods store on Eighth Avenue at 24th Street in 1857.  The location would have been ideal; except, unknown to them at the time, the grand shopping district which would become known as The Ladies Mile would develop two blocks to the east on Sixth Avenue.
As the concentration of shops on Sixth Avenue lured shoppers away from Ehrich’s, the brothers initiated a free coach service between the two thoroughfares in the 1880s.  Finally in 1889 they gave up and built a new emporium on the west side of Sixth Avenue at 22nd Street, just south of William Moir’s jewelry store.


Architectural historians disagree on the architect, crediting either William Schickel or Alfred Zucker with the attractive design.  Rising five stories, it was a graceful Renaissance Revival structure with intricate molded foliage details and a graceful bracketed cornice.  As business would flourish, the brothers would continue to enlarge the store, almost seamlessly; finally wrapping around Moir’s little corner building.  It would be a harmonious marriage of limestone, cast iron and brick -- depending upon the section.


The store specialized in millinery and silk dress goods.  There were, however, departments for the rest of the family as well.  Boys’ and girls’ fine Jersey caps were advertised for 28 cents each, the household department sold blankets and table and bed linens, and men’s hosiery, underwear and suspenders were available.
As a side business the store made theatrical costumes.  In 1893 as Marie Tempest was in rehearsals for the comic opera “The Algerians,” Ehrich Brothers was hard at work creating her wardrobe of “four complete costumes and two wraps.”

The store attracted the wrath of the Chairman of the U.S. Congressional Committee of Ways and Means, William M. Springer, in 1893 when he took issue to the small children working in the store.   He reported to Congress that children “who I should say are not above 10 years of age” were working twelve hours or more every day.


“I have seen Ehrich Brothers’ store open and crowded as late as 11 o’clock at night,” he wrote, “and those children still on duty.”
The brothers were convinced to amend their hiring practices.

The fine selection of goods was too much for Kate Kelly and Maggie Johnson to resist.  On January 17, 1894 the two women, 28 and 29 years old respectively, casually looked over the selling floor around 6 pm.  Detective Charles Jones watched the suspicious-acting pair as Kate Kelly slipped a bundle of three skirts under her cloak.  The two then calmly left the store.


When the detective tried to detain the girls on the sidewalk, they dropped the stolen property and bolted towards 23rd Street, followed by a group of clerks who had vaulted over their counters to join in the chase.  The commotion cause a crowd of what The New York Times estimated at “of a thousand or more persons” who made escape impossible.
The skirts were valued at $40.


By 1910 the shopping district was moving northward, following Macy’s enormous 1901 department store on 34th Street.  In an effort to lure customers, Ehrich Brothers followed the example of the Eden Musee just around the corner on 23rd Street – they showed motion pictures.
According to Louis Pizzitola in his “Hearst Over Hollywood:  Power, Passion, and Propaganda in the Movies,” the store allowed motion picture pioneer Florian Zittel to install a small movie theater in the back.  “Curious movie patrons weren’t charged a fee; putting on the film program, which changed daily, wasn’t expensive, and the Ehrich Brothers found that films filled their store and increased their sales,” according to Pizzitola.


“We made it pay,” Zittel later said, “and that is the purpose of all business.”
But free movies could not keep the business profitable and in 1911 the Ehrichs decided that rather than move their business uptown they would simply close.  The Edison Monthly reported that the Ehrichs were millionaires upon retirement.

The prominent Chicago dry goods business of I. L. Kesner Company bought the building and immediately did some updating.   Architects Taylor & Levi modernized the street level with stylish Arts and Crafts style pilasters encrusted with terra cotta panels by Hartford Faience.  The earthy-toned tiles in beige, blue, green and white featured the initial K and were much in line with the subway station decorations being installed at the same time.  Cast iron ornamentation on this level included the K motif.


Changes were made inside, as well.   A new electric lighting system was installed, an up-to-the-minute optical department was added to test for eyeglasses, and an ingenious conveyor system for delivering parcels from the basement to the street was set up.


A conveyor belt moved the packages to bins and then to a motor-driven escalator that carried them to the sidewalk where delivery wagons waited.  Also in the basement was a machine that pressed waste paper into bale and a ventilating system.  There was a restaurant on the four floor and a soda fountain for weary shoppers.
Workers behind the scenes used forty different sizes and types of flat irons to press everything from men’s suits to women’s lingerie.


Kesner’s spared no expense to insure that the new enterprise would be successful, to the point of relocating especially successful Chicago sales personnel.  The magazine Notions and Fancy Goods noted in January 1911 that “Elsie H. Cullerton, formerly buyer of gloves at Hillman’s department store, Chicago, Ill, has resigned to take a similar position in the new department store to be opened on Sixth Avenue, New York, under the name of I. L. Kesner Co., in the old Ehrich Bros.’ building.”
But no amount of renovation or advance planning could alter the fact that the Ladies’ Mile was dying.  Within two years I. L. Kesner went bankrupt.  In June 1913 1600 people attended the auction of the firm’s stock and the grand emporium closed its doors forever.

Throughout the 20th Century the Ehrich building underwent the same degradation that all the great retail palaces along Sixth Avenue experienced.  By the 1980s it was rusted and grimy with small businesses operating throughout.


With the renaissance of the avenue and the creation of the Ladies’ Mile Historic District came hope for the building; despite protests by the owners against landmark status of a “rundown building.” 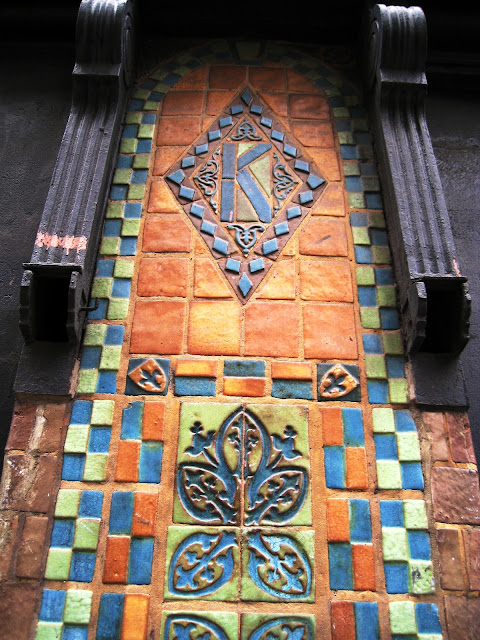 By 1993 Staples had leased about half of the ground floor and exposed the Arts and Crafts tiles which had been covered over by modern storefronts.  A year later Burlington Coat Factory took over a full 85,000 square feet and commissioned Frank Richard Gencorelli to renovate the structure.
Back from the edge, the Ehrich Brothers’ emporium gleams again as it did in 1889.


non-credited photographs taken by the author
Posted by Tom Miller at 3:44 AM