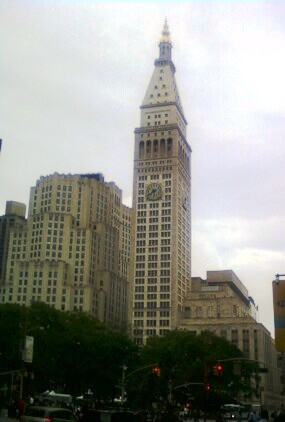 In 1893 The Metropolitan Life Insurance Company made a bold move, erecting its headquarters on 23rd Street and Madison Avenue facing Madison Square – far uptown from the other insurance firms.   The impressive 11-story structure  invaded a well-to-do residential neighborhood, dwarfing the elegant brownstone mansions around the park.
The insurance company was well on its way to being the largest in the nation and its new headquarters were instantly insufficient.  Within a year of the building’s completion the firm was buying up adjacent land, including the Lyceum Theatre and National Academy of Design building at the northwest corner of 4th Avenue and 23rd Street.  With the demolition of that white marble Venetian palazzo, constructed in 1865, the company would build a series of matching annexes filling the entire 23rd Street block front.
In 1895 the Standard National Bank leased what The Times called “commodious and handsome quarters” on the first floor.  The main entrance lobby of Metropolitan Life headquarters, called the Marble Court, was sumptuous with a 400-foot marble arcade leading to 4th Avenue and a grand white marble staircase.  The interiors, which were meant to reflect the enormous success of the firm, were breathtaking.
Abutting the lavish structure to the north was the brownstone Madison Square Presbyterian Church.   After the turn of the century John R. Hegeman, president of the Metropolitan Life Company, purchased the magnificent Catharine Lorillard Wolfe mansion on the northeast corner of Madison and 24th Street for $700,000 and offered to trade the site with the church.  An additional $300,000 cash was thrown in to sweeten the offer.
The church accepted and in 1905 plans for a staggering 500-foot tower were filed by the architectural firm of Napoleon LeBrun and Sons.  The architects were probably best known at the time for their long-standing commission as the official architects of the New York City Fire Department through which they created ornate fire houses disguised as palazzos and chateaux.
When asked about the height of the planned building, Napoleon Lebrun remarked “Five hundred and sixty feet is a little exaggeration, but it will not be so very far from that.  I am sure it will be a great ornament to the city.”  Before its completion, however, the tower would grow to a full 700 feet, encompassing 51 stories.

Just two blocks to the north stood Stanford White’s Madison Square Garden, completed in 1900, the focal point of which was its 300-foot tower inspired by the Campanile of Venice.   The LeBruns decided on the same model and in 1907 ground was broken for the second Venetian Campanile on the park.


When finished in 1909 the white Tuckahoe marble tower was the world’s tallest building – more than doubling White’s tower to the north.  The architects lavished the façade with Renaissance motifs and balconies.  An elaborate lighted lantern on top could be seen throughout the city.   Four immense illuminated clock faces made of glass tesserae, 26-1/2 feet in diameter, graced each side.  The minute hands were 17 feet long and the hour hands were 13 feet long – weighing 1000 and 700 pounds respectively.  The numerals and minute markers were of bronze and translucent glass.
Like its inspiration, the structure was a functioning bell tower; resulting in both annoyance and joy among the nearby residents.   William P. Hickock wrote to the editor of The New York Times on August 20, 1909 complaining that while the “Metropolitan Tower is an architectural achievement of which New York and its citizens take great civic pride…There is no end served by the ringing of these bells adequate to the annoyance caused.”

Another reader shot back four days later.  “Let us continue to direct our efforts to the end of ameliorating the harsh and discordant and avoidable noises of this city, but let us congratulate ourselves in the possession of these beautiful bells, which are not only a continual source of pleasure, but will serve in supplying a need in telling us the correct time every fifteen minutes.”

Not everyone was pleased with the tower itself.  In 1917 Helen W. Henderson, in her “A Loiterer In New York,” criticized the design as “brazenly taken for modernity by the bumptious Metropolitan Tower, whose ugly bulk quashed the pretty charm of the fine trees and fountain, putting the very sky out of scale, and, as a last word in impertinence, claiming derivation from –oh shade of St. Marks!—the Campanile of Venice.”

In 1912 Theodore Roosevelt’s election headquarters leased space on the 24th floor.  The tower remained the tallest structure in the world until being surpassed by the Woolworth Building a year later.

Throughout the 20th Century the Met Life Tower, as it became known, was a major fixture in the Manhattan skyline.   In the late 1950s plans were underway to strip the original “East Building” of its Victorian details in an effort to update it.  On November 29, 1957 The Times reported that “The sentimental movement that seems to be making no headway at all is the suggestion that the lovely old marble stairs in the main lobby of the old Metropolitan Life Insurance Building…be spared by wreckers to go into the opera house expected to rise in Lincoln Square some day.”

Indeed, the plan went nowhere and all the sumptuous architectural elements, inside and out, were lost.   The modernization which began in 1962 replaced the Renaissance Revival façade with sleek plain limestone and the interiors were gutted.

At the same time a renovation by Morgan & Meroni resulted in a potato-peeler overhaul of the tower.  The white marble was faced with limestone, much of the sculptural decoration was stripped off, the rusticated corners and the machicolation below the arcade were removed, as were balustrade balconies and a significant cornice.  LeBrun’s original gilded cupola was replaced with a replica.

A subsequent three-year, $30 million exterior restoration project began in 1999 that gilded the huge cupola with 23.75-carat Italian gold leaf, added a computerized lighting system similar to that of the Empire State Building, and restored the clocks and eroding stonework.