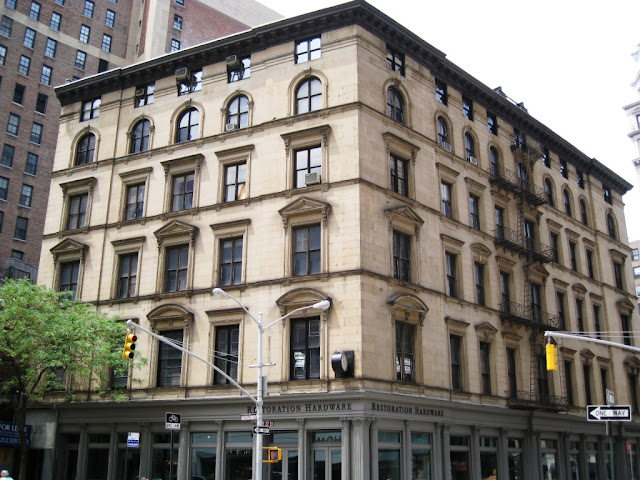 In the final years before the Civil War the staid mansions on Broadway from 14th Street to 23rd Street gradually gave way to commercial buildings. One of the first of these was the dignified five-story structure at Nos. 935-939 Broadway.

Richard Mortimer owned real estate throughout Manhattan and for this plot he commissioned architect Griffith Thomas to design an Italianate brownstone structure that would blend comfortably in with the elegant residences. Thomas, who decades later would be praised by the Architectural Record as “the most fashionable architect of his generation,” produced a refined building with Renaissance detailing such as the pediments over the windows. Retail space would fill first floor while office space was above. Mortimer’s building filled the 22nd Street block front from Broadway to Fifth Avenue.

Construction began in 1861 and was completed a year later.

J. & C. Johnston Dry goods was one of the first tenants, while on one of the floors above the business college of Stratton & Packard did business. The offices of the makers of Dr. Jayne’s Expectorant were here as early as 1863 when this ad was published:

DR. JAYNE's EXPECTORANT will afford immediate relief by removing the difficulty of breathing and producing an easy expectoration, where by all irritating and obstructing manners are removed from the lungs. Having maintained its reputation, in all parts of the world, for over a quarter of a century, it is confidently recommended as the best remedy ever offered for the diseases it professes to cure. Sold by agents and druggists everywhere, from whom may also be obtained Dr. D. JAYNE's SANATIVE PILLS, a prompt and effectual cure for costiveness, sick headache, and all bilious affections

A contemporary tenant offered Grover & Baker’s “highest premium elastic Sewing-Machines for sale.” For those patrons not interested in doing the sewing themselves, the same business would do “family sewing, embroidering, braiding, quilting, tucking, etc., beautifully executed on the Grover & Baker Sewing-Machine.”

The American Institute of Architects, which was founded in 1866, established its offices here. On November 16, 1869 the third annual convention was held, chaired by President Richard Upjohn, in an effort to unite American architects and share ideas on “artistic, scientific and practical efficiency of the profession.”

It was here In February 1871 that New York’s elite gathered to view an exhibition of paintings, valued at $3,300, which were to be raffled off for the benefit of the orphans of Civil War soldiers in the Union Home and School.

By 1895 both Broadway and Fifth Avenue were bustling thoroughfares of grand emporiums and high-class retail shops. That year the store on the Broadway end of the Mortimer Building was occupied by C. W. Schumann’s Sons, jewelers and silversmiths. A. Besthoff & Son ran the store next door, which extended to the 5th Avenue side, selling “European novelties and leather goods.”

Oriental rug merchants Van Gaasbeck & Arkell did business from fourth floor while upstairs were the studios of Pach Brothers – counted among the most esteemed of New York City photographers.

Around 1:20 in the afternoon of February 16 that year a fire broke out in the Pach Brothers space, Quickly it spread to a three-alarm fire that could not be controlled for more than an hour. By the time it was extinguished, the fire had burst through the roof; destroyed parts of the cornice, pieces of which fell to the street; the intense heat had blown out windows.

Water damaged proved worse than that caused by the fire. On the same floor as Van Gaasbeek & Arkell was Geoffroy & Co., jewelers. Below, on the third floor, were Cochrane Carpet Company and Horner Brothers’ Carpet Company. Water poured through the floors soaking their inventory.

On the ground floor, Schumann’s employees took no chances. Before the water could reach the first floor they had quickly stowed everything of value into the vaults.  At the time, the store was showing paintings valued at as much as $30,000 each, two of which had recently been exhibited at the Chicago World’s Fair.  All but two were rushed across the street to a clothing store for safe keeping.

Within the month Richard Mortimer (whose main business was stock broker) filed plans for alterations of the burned structure at a cost of $500.

Pach’s misfortune with flames with not end with the near-destruction of the Mortimer Buildling. Two years later in December the photographer was commissioned by the rector of Grace Church to photograph the church's new chapel. When the magnesia powder was ignited to take a flash picture, the resulting explosion blew out some of the stained glass windows.

In 1912 architectural firm Rouse & Goldstone was called in to add a sixth floor to the building. The roof was removed and the attic space raised. Square, inset windows were inserted just under the new cornice.

Through the first half of the 20th century the Mortimer building continued to be home to small apparel companies. In 1920 the Samuel Buyer garter manufacturer took space here followed in 1922 by the newly-formed Earl Shirt Company. In 1935 the Kase-Quinby Rubber Company opened its offices here.

When Jack Albert purchased the building he added enormous gold-toned letters on the 22nd Street and 5th Avenue corner vertically spelling A L B E R T. The large, Victorian-looking letters became an important part of the building to New Yorkers, as well as the clocks on both corners.

Towards the end of the century, Restoration Hardware moved into the entire first floor of the old Mortimer Building. A complete restoration of the greatly-altered storefront brought it back to its original appearance. Around the same time the wonderful gold ALBERT letters were removed.


For some reason amateur New York historians insist on confusing the Mortimer Building with the Glenham Hotel. The Hotel, however, sat next door on the 5th Avenue side and was replaced by the 1893 Scribner’s Building that still survives.

The Mortimer Building is a rare example of Civil War period architecture in the lower 5th Avenue district.
Posted by Tom Miller at 3:04 AM