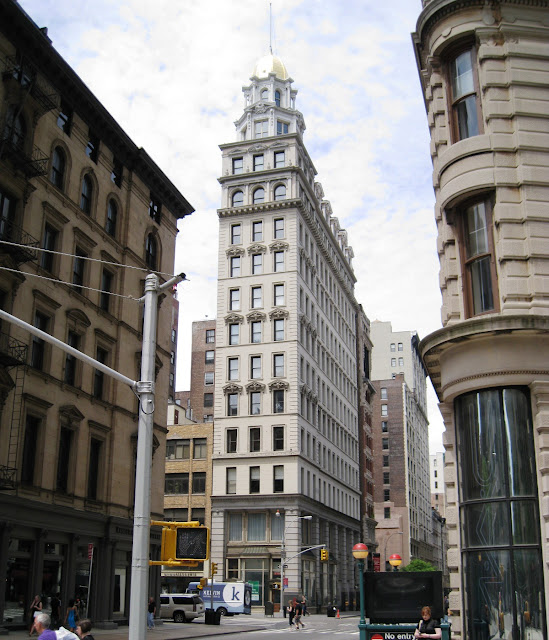 During the last decade of the 19th Century Henry Corn was busy developing lower Fifth Avenue. From 14th Street to 23rd Street, as the brownstone mansions that lined the avenue fell one by one, Corn erected one office and loft building after another.

Until 1897 a four-story stone-fronted house sat on the southwest corner of Fifth Avenue and 22nd Street. As wealthy residents moved uptown, it became the home of Knoedler’s Art Gallery where well-to-do New Yorkers shopped for paintings and objects d’art.

Corn obtained the property and commissioned Robert Maynicke to design a 12-story store and loft building on the site. Maynicke was a favorite of the developer and designed several structures for him.

The resulting building, completed in 1898, was no wider than the brownstone house it replaced, 29 feet, but extended back on 22nd Street 120 feet. It was a long sliver of a structure that, if not handled expertly, could have produced an awkward design.

Anything but awkward, it was a striking work. A two-story base of rusticated pilasters would accommodate retail store space. Above a stone cornice the building rose eight stories to a bracketed cornice. Renaissance-inspired pediments capped windows on three floors, wrapping the corners.

Above the tenth-story cornice on 22nd Street rose a slate mansard roof, punctuated by robust dormers. On the Fifth Avenue side, the building was crowned by two eight-sided drums supporting an octagonal dome; an eye-catching culmination of a dignified addition to lower Fifth Avenue.


Nearly a century later in his “The American Skyscraper, 1850-1940: A Celebration of Height,” architectural historian Joseph J. Korom would call it “a delicate creation” and a “petite lady wearing white brick and limestone.”

The ground floor space was leased by the Sohmer Piano Company for its showroom and offices. The innovative company was responsible for the first modern baby grand piano and led the pack in marketing player pianos. The well-respected instruments were preferred by musicians like Irving Berlin and Victor Herbert. 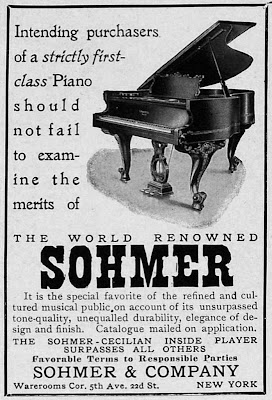 The magnificent building escaped the architectural abuse many of its neighbors endured throughout the 20th Century. It retained its small, marble-paneled lobby and detailing. Here, until 1960, were the offices of the American Civil Liberties Union.

By the end of the century the tall wooden flagpole on the cupola was replaced with one of aluminum and in 1995 2,700 sheets of 23.5-caret gold were hand applied to the dome – each sheet about the size of a playing card.

The building was converted to residential use in 1999 – one apartment per floor above the second story and in 2005 Bone/Levine Architects did a full restoration of the façade.

Robert Maynicke’s masterful use of a long, narrow site caused the AIA Guide to New York City to recommend that “Hip young architects should see this for themselves and take notes.”
Posted by Tom Miller at 2:39 AM