The 1902 Flatiron Building -- 23rd Street between Broadway and 5th Avenue

It was not the soaring height of the Fuller Building that caught New Yorkers’ attention in 1902.  And it was not the masterful, almost sculptural, design.  It was the wind.
The pie-shaped plot of land bounded by East 22nd Street, Broadway and Fifth Avenue – with its nose poking against 23rd Street – held a hodge-podge of small commercial buildings prior to 1902.  But its visible location at the confluence of the major arteries coupled with its location across from Madison Square Park gave it an untapped and inestimable value.  This despite the neighborhood’s recent slide from carriage-trade emporiums to mostly loft spaces with small manufacturing.


The site was owned by Amos Eno and after his death in 1899 his son William purchased it from the estate for $690,000; a staggering sum at the turn of the century.  Within a month he sold the property to Samuel and Mort Newhouse for $801,000.  Although the Newhouses had lofty plans for the site initially, they eventually sold it to Harry S. Black two years later.
Black ran the Fuller Company, a general contracting company whose specialty was the construction of skyscrapers.  Fuller was, actually, the first actual “general contractor” – a firm that handled all phases of construction other than its architecture.


Harry S. Black envisioned an impressive new headquarters for his firm – one that would establish not only its reputation as a serious player in the building game, but which would advertise its construction capabilities.  Rather than tap the talents of local architects like McKim, Mead & White or Carrere & Hastings, Black turned to Chicago-based Daniel Burnham.
Burnham designed a 21-floor show-stopper, mixing Renaissance Revival with Beaux Arts styles.  The facade was slathered with carvings and molded terra cotta – barely a square foot could be found without ornamentation.  The building rose from a limestone base to the ornate terra cotta above; the detailing designed by Frederick P. Dinkelberg who worked in Burnham’s office.


The Fuller Building went up like a skyrocket.  The foundation was completed on March 3, 1902 and exactly four months later the roof was placed in position.  On August 1, only nine months after ground was broken, it was completed.
Rising 300 feet, the Fuller Building was a marvel of architecture, appearing to part the avenues like a great ship.  The 23rd Street exposure was a mere 6.5 feet wide, broadening southward to fill the 22nd Street block between Fifth Avenue and Broadway.
The tiny point on the sidewalk level was essentially useless so Black had a retail space built out which was not on Burnham’s original plans.  The “cowcatcher” store, Black felt, would take advantage of the busy site and produce income.  Because of its triangular shape, it quickly gained the nickname the “Flatiron Building” – although other similarly-shaped buildings were also given that tag at the time.

The steel skeleton, said to be the heaviest in New York at the time at 4,000 tons, allowed the structure to attain its full 20 stories plus attic.  New Yorkers by now were accustomed to higher and higher buildings.  But they were not quite so sure about the effects that the great wedge of masonry would have on air currents.
At its completion the Municipal Journal & Public Works said “New York’s latest freak in the shape of sky scrapers has already been nicknamed the ‘Flat-Iron,’ although it is otherwise known as the Fuller Building. “  Almost immediately rumors began circulating about the building’s effects on the wind.


In 1903 the America Druggist and Pharmaceutical Record reported that “the erection of this building is said to have had a curious effect in regard to air currents and a case is at present pending in the New York courts, one man suing the owners of the building for a large sum as compensation for the blowing in of his windows, which has happened several times since the building was erected.”
The article continued “Then the street passengers are knocked about in all sorts of rude and unkindly fashions, so that it appears as if the Flat Iron Building may not be an unmixed blessing to the locality.”


On February 6, 1903 The New York Times blamed increased wind gusts the day before on the Flatiron Building, saying the storm “took up its headquarters in the Flatiron Building…Conservative guessers who drifted past the building during the afternoon estimated the velocity at 1,000 miles an hour…A $500 plate glass window, twelve by eight feet, adorned the café of the Hotel Bartholdi, directly opposite the Flatiron Building, was the first victim of the wind.”  The reporter continued, “Later in the day a recoil gust of wind smashed in one of the three windows of the extension which forms the northern corner of the Flatiron Building.”


Fourteen year old John McTaggart’s death that day was blamed on the building.  The messenger boy was attempting to round the 23rd Street point of the building against the wind.  After attempting three times, he was reportedly blown into 5th Avenue and fatally injured by an automobile.
Then, on September 17, 1903, The New York Times reported on another wind storm.  “When the storm was at its height, Madison Square for an area of 200 yards from the Flatiron Building was swept clear of all traffic.  Anything less heavy than a street car that came within the zone dominated by the triangular structure was blown away.”
A concerned citizen from Newport, Rhode Island, J. A. Swan wrote to the newspaper suggesting a solution:

In regard to the trouble at the Flatiron Building, which we read about every time we have a high wind, has it been suggested by anybody that it could be all remedied, without spoiling the looks of the building, by putting a balcony about four feet wide around the building just below the windows at every story, or every other story?  I have been convinced in my own mind from the first that this would prevent the wind from sweeping down after it strikes the building.

Not everyone was concerned about the wind effects.  Policemen were kept busy shooing away the young men who loitered at the 23rd Street point of the building, hoping an errant gust of wind would lift the hems of passing ladies, exposing a tantalizing glimpse of ankle.
Wind worries eventually subsided and in March of 1915 plans were filed with the Building Department to increase the height of the skyscraper.  A “draughting room” was charted as an additional story “ten feet high with several skylights.”  The estimated cost of the addition, which would bring the building to a full 22 stories, was $10,000.
Four years later the effectiveness of the water pressure in the soaring building—so thoroughly tested in 1902--would be put to the test again when a fire raged on the 21st floor.  Firefighters were required to wrestle high-pressure hoses from the lower floors up the stairs in a five-hour battle with the flames.
Although the structure was little damaged, the heat dislodged one of the large ornamental blocks—about four feet wide and a foot thick--from the facade.  The block fell 21 floors to Fifth Avenue, missing a policeman by a few feet.  The concussion of the masonry onto the pavement broke a plate glass window in the Stein Doblin Company at Broadway and 22nd Street.
Throughout its existence the Flatiron Building has remained an icon of New York City.  In their Beaux Arts Architecture in New York, Edmund Vincent Gillon and Henry Hope Reed said “Of all the skyscrapers built in the first decades of this century, the Flatiron Building was the one that captured the public imagination–even more than did the Woolworth Building.”
It has been the focus of esteemed photographers like Berenice Abbott, Alfred Stieglitz, and Edward Steichen; the subject of paintings by Albert Gleizes, Paul Cornoyer and other American artists; appeared in the writings of O’Henry and scores of television shows and motion pictures.  Even before its completion, the Flatiron Building was one of the most recognizable and most reproduced architectural images in the United States.
The beloved Flatiron Building has given its name to the entire geographical area around it: The Flatiron District.  And today it still functions as an office building, housing some of the nation’s most prestigious publishing companies. 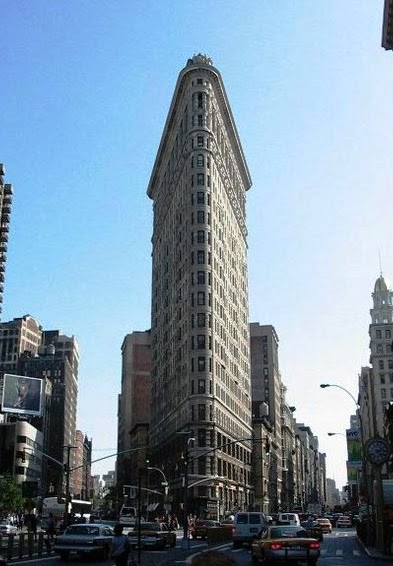